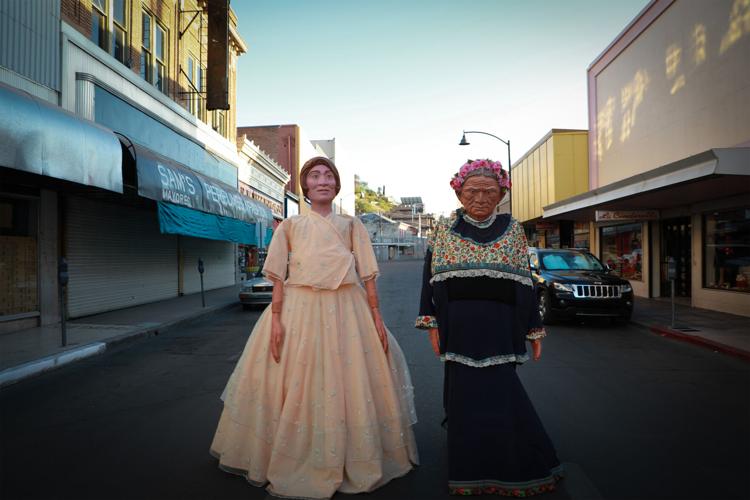 Borderlands Theater is putting on an interactive theater performance in downtown Nogales and has partnered with the local high school to get students to collect their family stories from both sides of the border to be performed at the event. 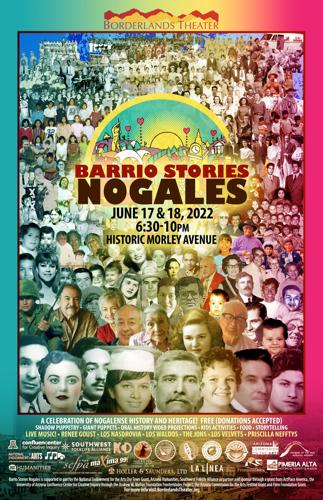 Borderlands Theater is putting on an interactive theater performance next weekend.

A “choose-your-own-adventure” theatrical event is looking to reshape the narrative of border towns and be part of the revitalization of downtown Nogales by telling the stories of the people who have lived there for generations.

The third installment of the Barrio Stories Project is the culmination of two years of research and community engagement, created in conjunction with Borderlands Theater ensemble and residents of Nogales.

When this project first began, before the pandemic forced it to pause, Milta Ortiz, Borderlands Theater associate artistic director, started interviewing people in Nogales to gather the city’s history. She had also done interviews in previous iterations of the project that focused on two of Tucson’s historic Mexican-American neighborhoods — Barrio Anita and the grounds of the Tucson Convention Center.

Ortiz also worked with a class at Pierson High School, in the Nogales Unified School District, guiding the students in gathering oral histories to create a sense of place.

“A big emphasis of Barrio Stories is to celebrate and preserve the history,” she said. “So we talk to elders in the community about the way that things were to get people thinking about, why did this change, and how can we help and bring that energy back?”

Along with the Borderlands theater ensemble, the students interviewed friends and family on both sides of the border. Those oral histories were edited and put together as a sort of video collage, which will be projected onto Morley Avenue’s historic buildings during the event.

In one video, a Pierson High student listens to her grandmother and great-grandmother talk about when the maquiladoras first opened in Sonora, Nogales — factories along the border that offered numerous jobs to provide cheaper labor for foreign companies, often from the U.S.

One of the women remembered leaving the Arizona side for the work that was booming in Sonora. People crossed back and forth with ease back then, but by the time the older woman wanted to return to Arizona, she was told she could not.

“She never actually got her paperwork for citizenship here because she didn’t need to, and then everything changed,” Ortiz said. “And now she can’t really come over here and spend time with her family, because before, they used to cross the border like it was nothing.”

As in this one woman’s story, residents of Nogales have seen a drastic shift in their city over the years due to changes in border security and shifts in economic drivers.

Barrio Stories Nogales is about envisioning a future where Morley Avenue and downtown Nogales are a hub for creative activity, locally driven commerce and unifying community events.

This event is part of the effort to revitalize Morley Avenue, says Marc David Pinate, who is the event’s shadow theater director and worked with the high school students to turn the oral stories they collected into plays.

One impetus for this entire project, which started four years ago, was talent flight, Pinate said, talking about the many young people who leave Nogales after high school because there’s not enough to keep them there.

As the artist with Borderlands got to better understand the Nogales community, it became apparent that many who have a stake in Morley Avenue would like to see more art events in the downtown area, as a way to revitalize the area for residents and to draw people from outside Nogales.

“This business-arts district is more aimed at the rest of Arizona, certainly Tucson and the Tucson-Nogales corridor, but even further up into Phoenix,” Pinate said. “It’s an amazing culture already because it’s binational and everybody is bicultural, and it’s so fluid the way that everybody is bilingual and bicultural and can just go back and forth like nothing.”

A second impetus for this project is to facilitate a narrative shift about the border, away from the idea that it’s a dangerous place to be feared, Pinate said.

Pinate asked Nogales City Councilwoman Liza Montiel, an active member of the committee, why she was so dedicated to the project, and she said the event was needed. You’re telling our story, he remembers her saying.

Pinate worked with 10 students to help them turn the stories they gathered into a giant puppet play — a teenage love story set in the tradition of the crowning of las reinas, the queens — a tradition that now only has some vestiges of the festival the elders remember.

The teens learned from their grandparents and great-grandparents that in the ’50s, the Nogales border would open for four or five days, Pinate said. There was a parade that started on the Arizona side and went into the Mexican side and back again. And the stage where las reinas were crowned was right on the border line — half the stage was in Mexico and half was in Arizona.

These are stories these kids never heard about.

“One of the great results of this process with them has been their own learning in a much deeper way about some of the history of their town and some of their traditions,” he said.

One thing Ortiz appreciates about Nogales, which she learned from doing the interviews for this event, is the “strong fronterizo culture.”

“What’s beautiful about a border is it’s a place of exchange,” she said. “People speak fluid Spanish-English like it’s one language. It’s like a fixture. It really encompasses what a border town is. That’s a really interesting culture to experience and to think about the border as being a place of intercambio, exchange, of fluidity, of mixing, like the language does there.”

There’s a whole arm of theater about “creative placemaking,” Ortiz says, similar to “creative place keeping,” which Ortiz first heard coined by Roberto Bedoya, a writer and cultural activist who is a former executive director of the Tucson Pima Arts Council. This concept is about validating a place as your own, returning to it, she says.

“We had energy in this area,” Ortiz said. “We were there. We made it happen. And I don’t know if it’s border issues, immigration issues that killed the energy, or fear of the narcos, but it’s about bringing back the energy that was once there and saying: ‘This is a place to be. This is a good place. This is a place for us to gather. We used to gather here. Let’s come back here.’”

The event runs from 6:30 to 10 p.m. each day, and people can show up at any time throughout and can go both days to experience different things.

The event is free, but donations are accepted. The first 100 attendees on both nights will receive a free poster.

7:30 to 10:00 p.m.: Media artist Adam Cooper-Terán will have large scale projections of oral histories from multigenerational residents of Nogales, from both sides of the border, projected onto Morley Avenue’s historic buildings.

There will also be food trucks, local vendors, arts and cultural resource booths, activities for children and storytelling circles.

For more information or questions, go to borderlandstheater.org or call the Borderlands Theater Box Office at 520-276-9598.

To volunteer to help with the event, go to tinyurl.com/zpsazfet or email Kaya Teyechea at k.teyechea@gmail.com.

What to do in Tucson this weekend: Check out Juneteenth events, pride events, live music, movie screenings, Brew at the Zoo, and kid-friendly activities in the Tucson, Marana and Oro Valley areas. Some events are free!

Check out our list of 19 books that are either written by authors with Southern Arizona ties or are about topics relevant to the area. Happy reading, Tucson!

Barrio Bread has been putting Tucson on the nation's radar for years. Our homegrown baker, with his homegrown grains, finally did it: won the James Beard Award for outstanding baker.

The 32-year-old from Chiapas, Mexico, suffered stab wounds to the chest and blunt force injuries after an incident with a Border Patrol agent in Douglas last month.