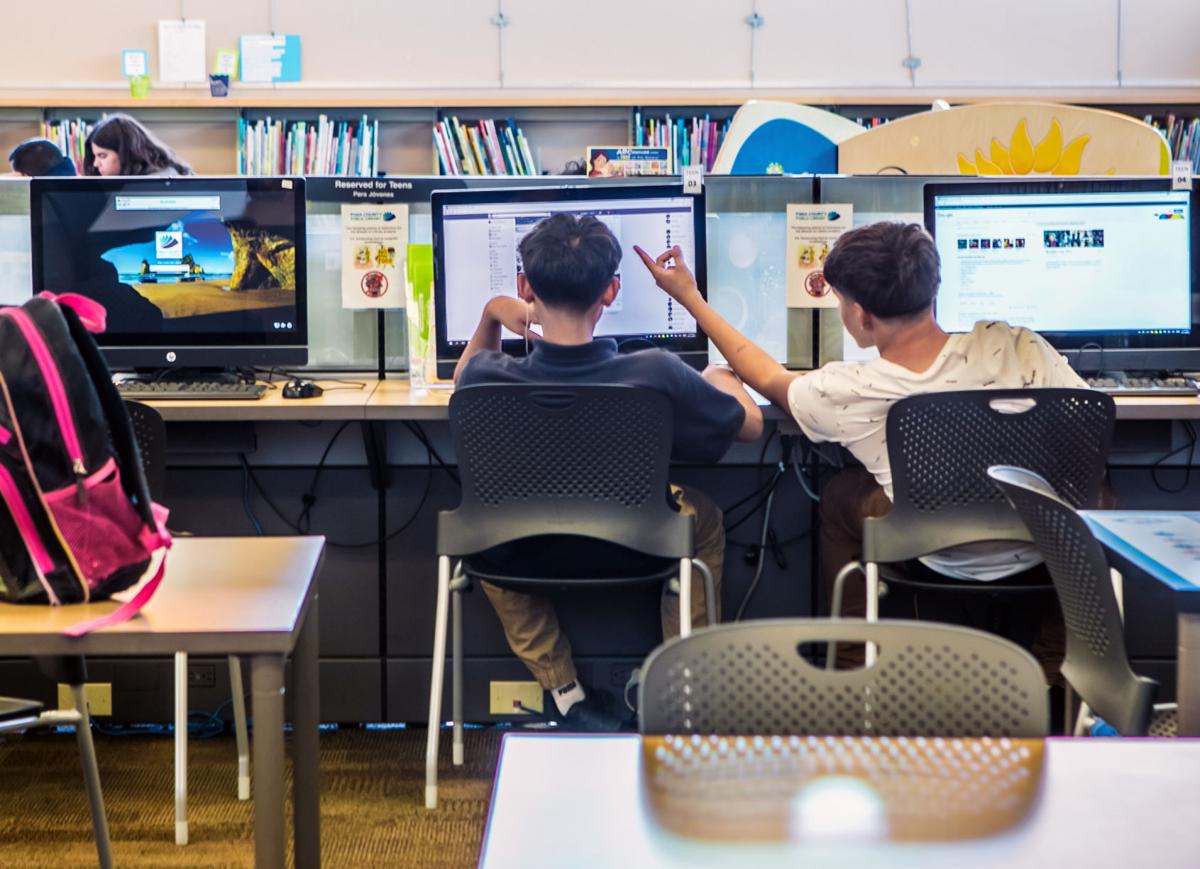 Boys surf the web together during after school free time at Eckstrom-Columbus Library in Tucson, AZ on April 11, 2018. 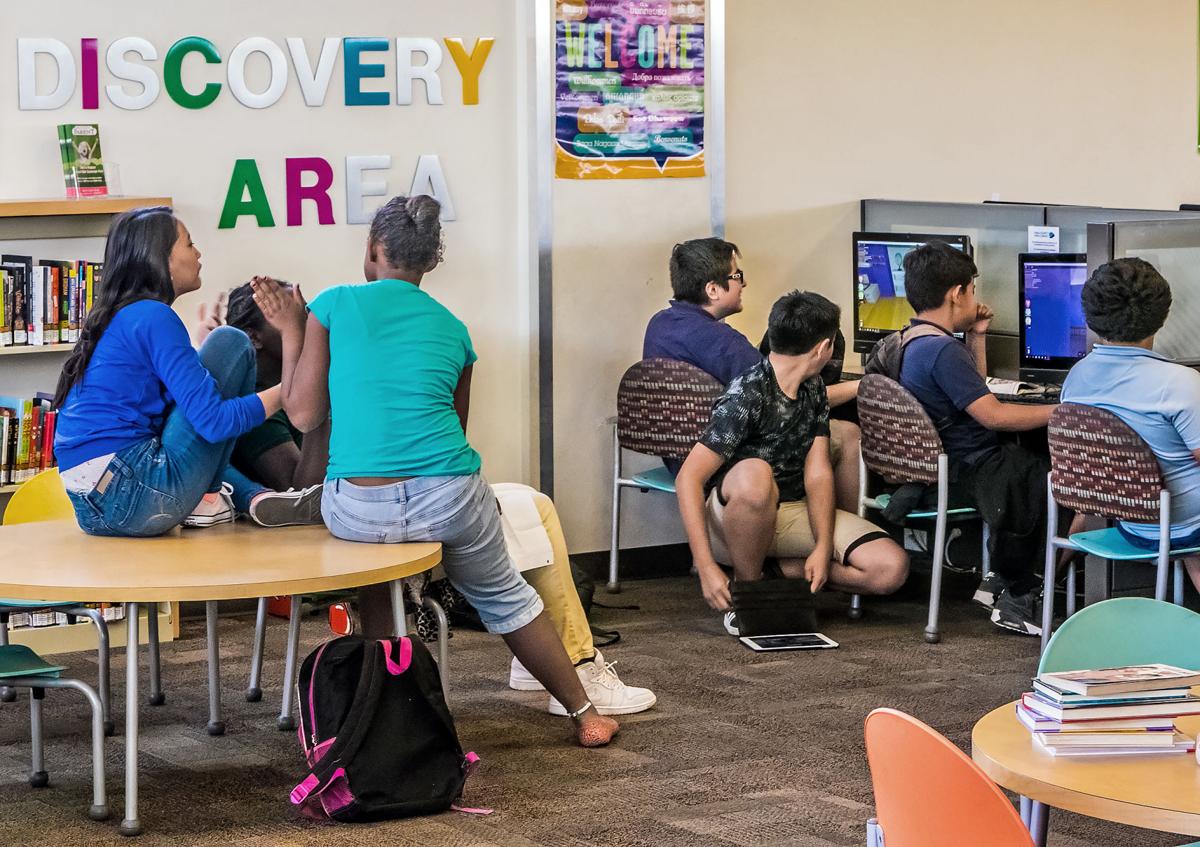 Kids gather in the Kids Discovery Area during after school free time at Eckstrom-Columbus Library in Tucson, AZ on April 11, 2018.

Most days after school, as many as 100 kids head to Eckstrom-Columbus Library to use the computers, get homework help and just hang out.

On Saturdays, neighborhood kids wander in around noon. Usually, they stay all day.

The library is their safe space. Plus, it has internet.

In August, the Pima County Public Library branch launched a new program to deal with disciplinary issues — because with that many kids, things are bound to happen.

Under the existing code of conduct that applies across the system of libraries, escalating incidents of horseplay, noise, fights and other disruptions could result in suspensions lasting for weeks. The same standards that apply to adults also apply to youth.

And for Mary Sanchez, the managing librarian at Eckstrom-Columbus, that was a problem.

"Our library is in a particularly higher-risk, lower-income population," she said. "There aren't a lot of things to do in our area for youth. It felt like by denying youth access to the library, we were really hurting our community and kids that really needed the service. I noticed we were suspending a lot of youth."

So she and other library staff developed LRPY (the librarians pronounce it lerpy).

Library Restorative Practices for Youth operates on the idea that kids and teens are, well, young. That means their brains are still developing, and they're still learning how the world works. So they deserve a bit of slack.

Sanchez wants to implement different guidelines for suspending kids versus adults and to shorten necessary suspensions for youth. Library staff already begin by talking to kids to correct behavior, but especially under these new practices, suspension would be a last resort.

To create a program that would work for the library, Sanchez worked with Brandy Finley, a Community Justice Unit supervisor with the Pima County Attorney's Office, and Catherine Tornbom, a manager for Community Dialogue and Training, a program of Our Family Services.

That's because when it comes to restorative practices, these women know their stuff.

"It's a good fit for many sectors — public, private and families — because it's about relationships and building those connections, so you're seeing more than just the problem," Finley said. "You're seeing a person."

Eckstrom-Columbus is piloting the LRPY program for the whole system. Using restorative practices, library staff refer a young person who repeatedly violates the code of conduct to meet with a board of four community members to talk about their behavior, its impact on others and how they can act differently. If they don't want to see the board (or don't show up), they take the suspension. The choice is theirs.

Though less common among libraries, Sanchez said she has learned of many schools using similar strategies.

"The problem we're trying to solve is how do we create better citizens?" said Em Lane, the young adult services manager at the Joel D. Valdez Main Library and a member of the LRPY work group. "How are we interacting with them so they know what is expected in the library, instead of punishing them and taking away this safe space ... this place they go after school?"

At a board meeting, community members lead referred youth through worksheets to get to the heart of their actions and emotions. The board meets twice a month.

"(A worksheet) might say, 'Who shows you respect and what do they do to show respect?' ... or 'What does my face look like when I'm mad,' and we'll draw a face," said Sofia Blue, a board member and former library staffer. Blue now works as a staff assistant to the Pima County Board of Supervisors for Ramón Valadez.

Between August 2017 (when the program launched) and December 2017, 40 incidents at Eckstrom-Columbus resulted in 22 LRPY referrals and 18 LRPY participants, according to data shared by Sanchez. There were only five suspensions during that time period.

That's a huge dip from the first half of the year, between January and July 2017, when 32 incidents resulted in 18 suspensions.

"We noticed when kids are kept out, they will try to sneak back in," said Kelly Wilson, the acting managing librarian at the Valencia branch and another member of the LRPY work group. That can then extend the suspension, resulting in a vicious cycle.

Samuel Hennig, a young adult services librarian at the Wheeler Taft Abbett Sr. branch, came to the library life from a former career as a corrections officer. He has seen where unaddressed issues can lead.

"I saw the other end..."said Hennig, another LRPY work group member. "A lot of times it was teenagers and young adults who were imprisoned, and that always weighed heavy on my heart, seeing those young kids make these decisions."

He imagines that many of those youth could have avoided the decision leading to imprisonment if they had a caring adult take an interest in them. In this next career, he hopes to be that role model for the young people he encounters.

LRPY board member Manuel Abril said that a number of Eckstrom-Columbus' library users come from refugee and immigrant families. Treating the kids with respect and engaging in dialogue rather than punishment says, "We consider you part of this community and we want to keep you in the community," said Abril, who leads art groups at a behavioral health center.

Since Eckstrom-Columbus is piloting the program, the LRPY work group recently spoke with other branch managers about implementing creative, restorative practices at their own libraries, even if that looks different branch-to-branch.

It's not magic. The same youth have been referred to meet with the LRPY board multiple times. But it's progress.

Sanchez remembers a boy whose mother and sister attended his second LRPY board meeting. He hasn't had any serious issues since and is consistently friendly with library staff, Sanchez said.

"We want our youth to know that this is a safe place, but also a place where you need to be respectful of each other," she said. "Through a program like this, you can approach those subjects and encourage youth to grow not just in their knowledge but also their behavior. ... We all want our youth to be successful, and we're looking more at how we can help that process."

It's a second chance at success.

In April they're celebrating Asian authors.

A teen coalition is organizing the Rising Voices Summit for youth this weekend.