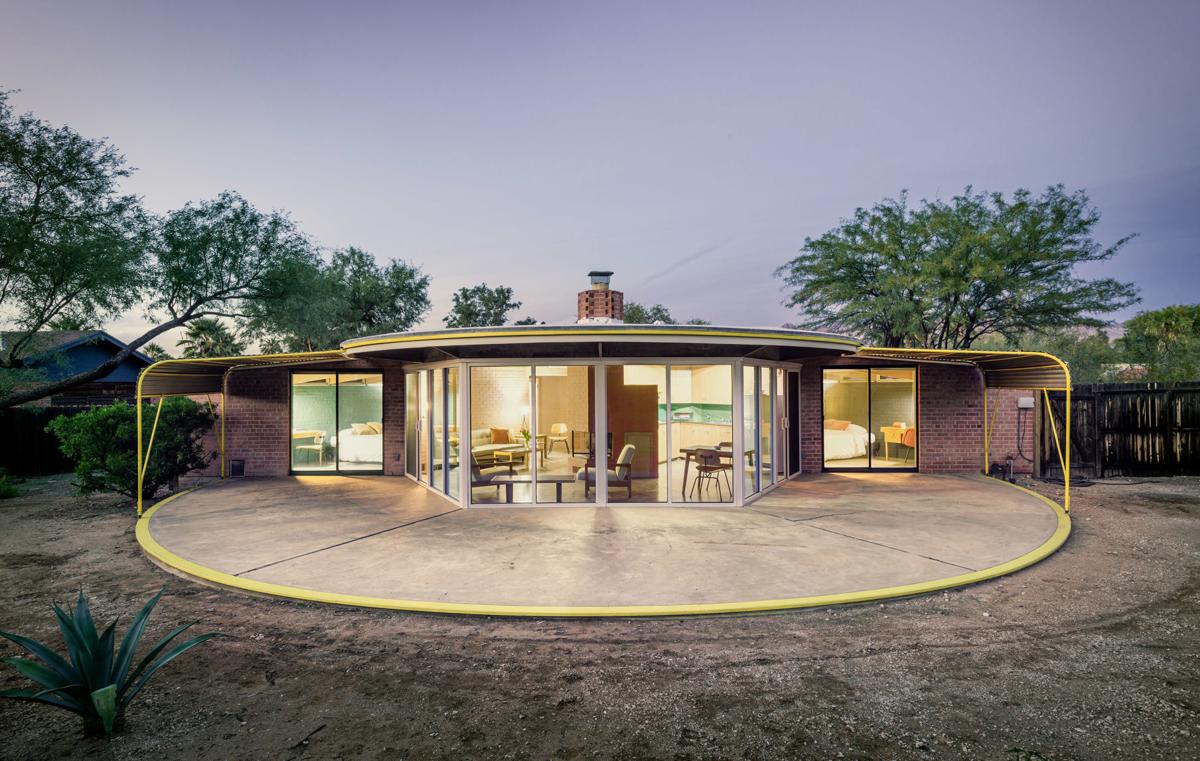 The Ball-Paylore House was built in the 1950s for Phyllis Ball and Patricia Paylore, who commissioned local architect Arthur T. Brown for the project. 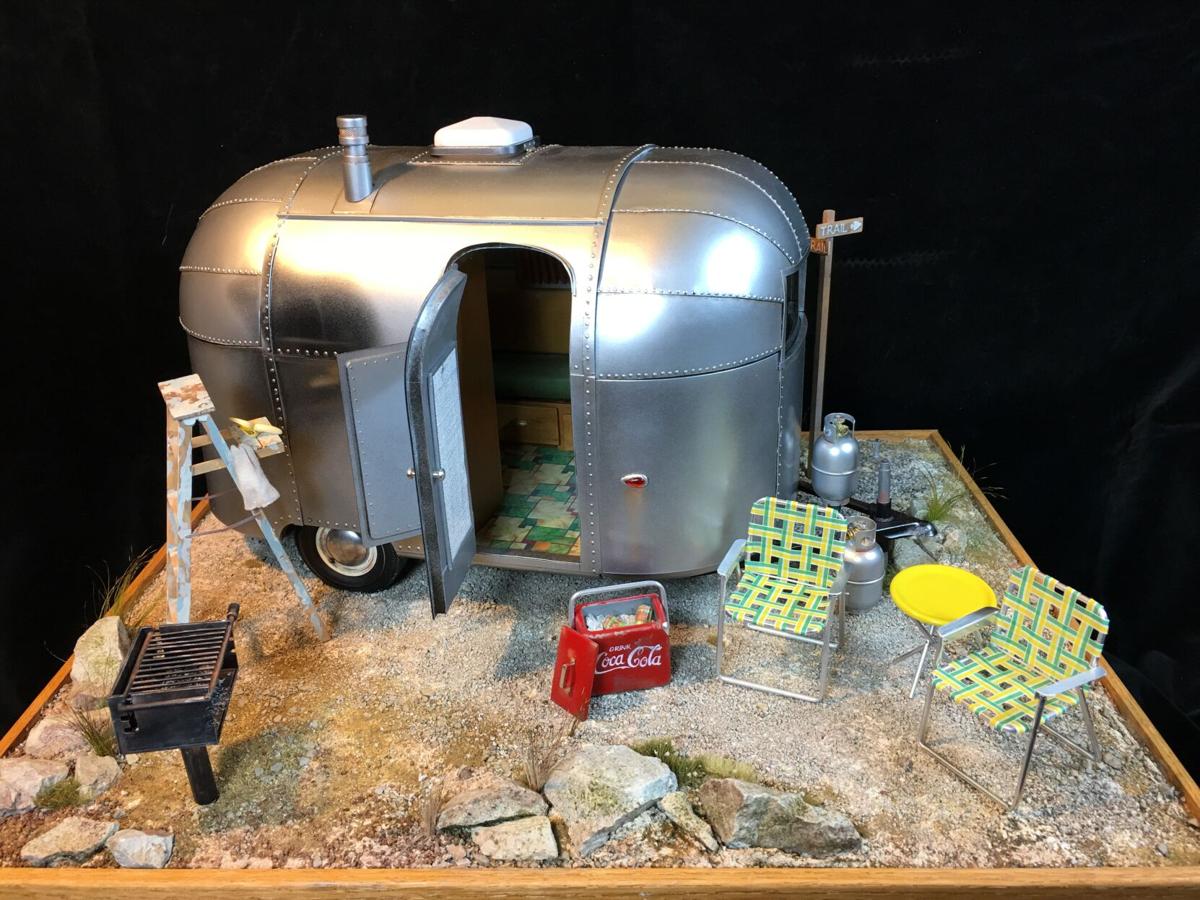 This is one of Yurkovic's miniature pieces that will be shown at the "Atomic Miniatures: Michael Yurkovic’s Modern Musings” exhibit this fall. 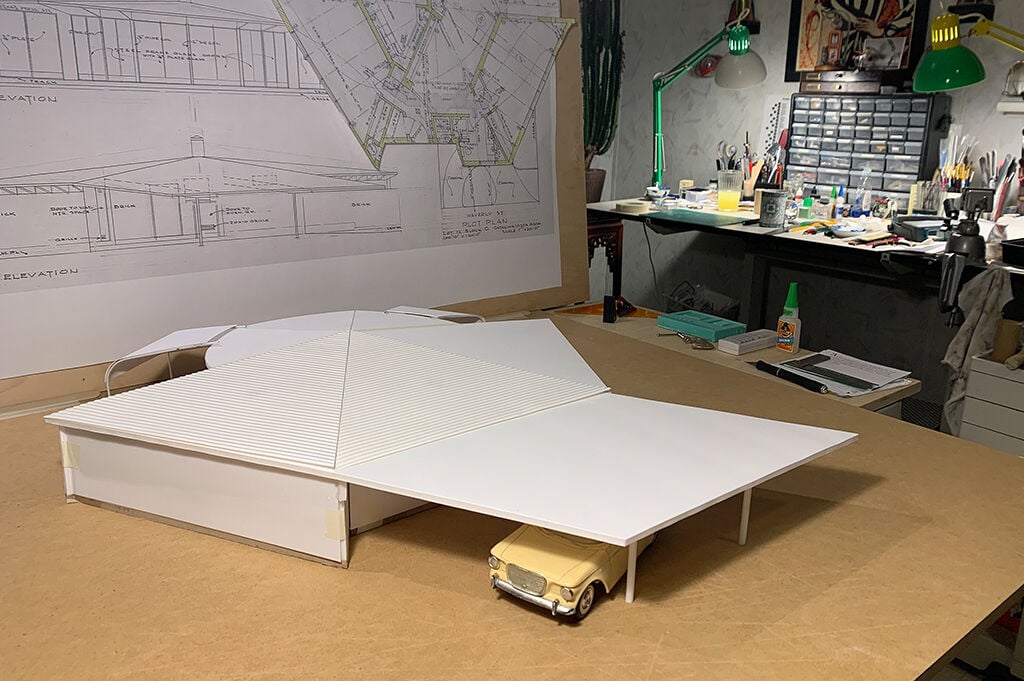 Michael Yurkovic first starts with research, taking photos and measurements, and creating drawings. Then comes a cardboard model of the replica. 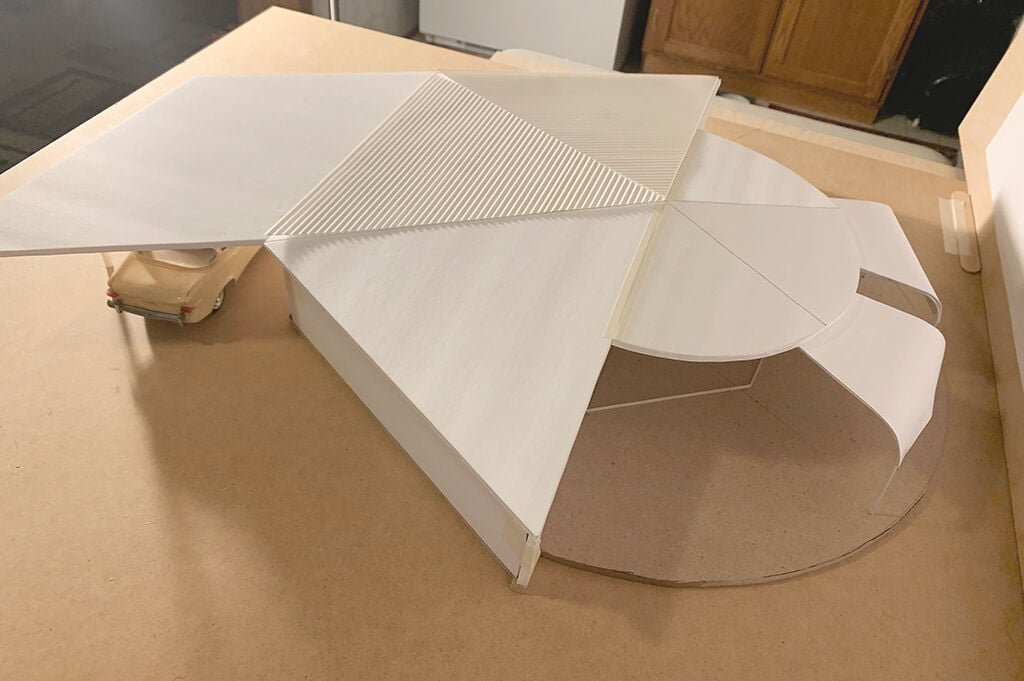 This is a photo snapped during Phase 1 of Michael Yurkovic's work to replicate the Ball-Paylore House. 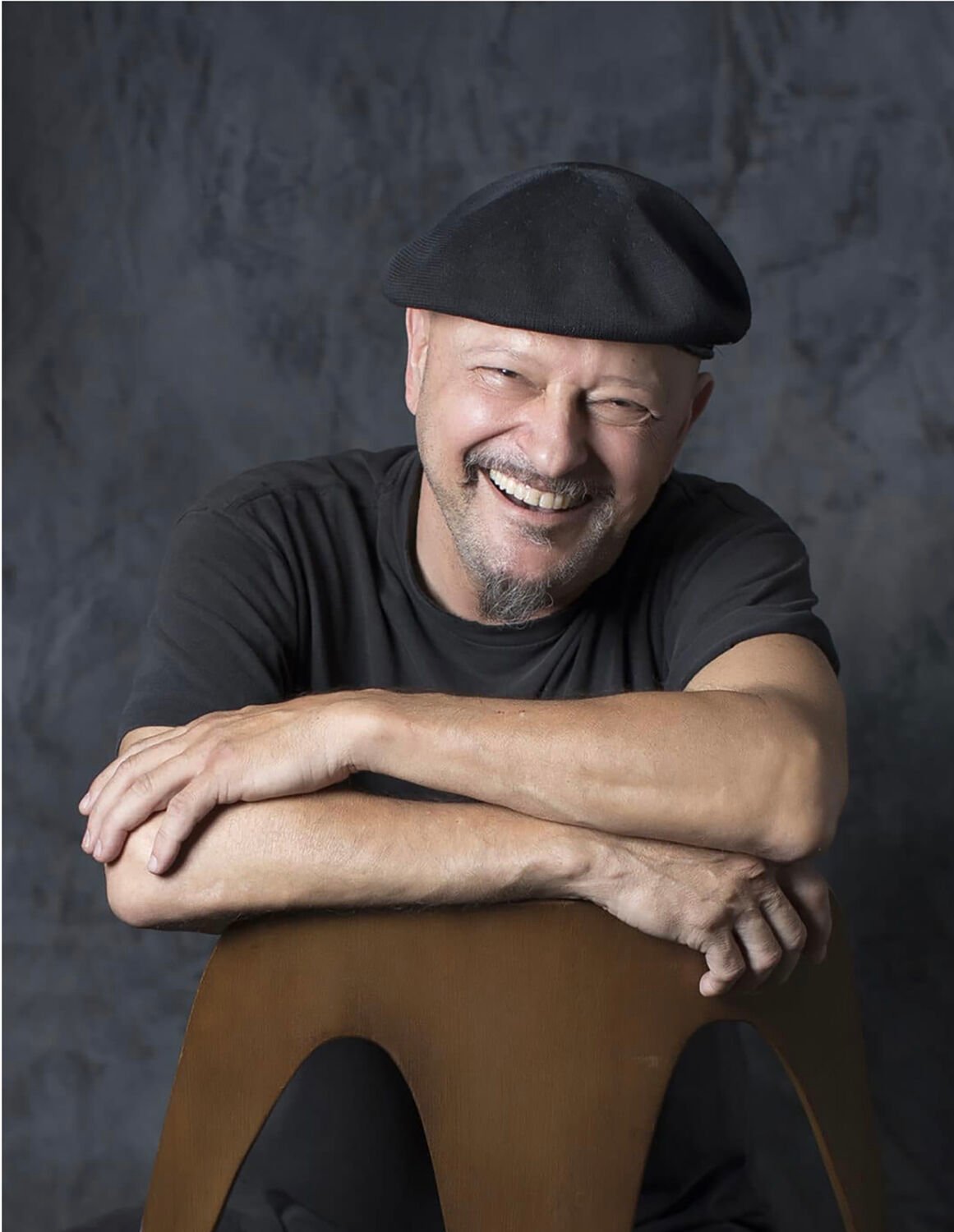 Michael Yurkovic has been creating miniatures for almost seven years.

Tucson’s historic Ball-Paylore House will soon have its own mini replica — the size of a pizza box.

The miniature replica, designed by miniature artist Michael Yurkovic, is part of an exhibit that will be held at Tucson's Mini Time Machine Museum of Miniatures this fall.

The Ball-Paylore House, located in midtown, was built in the 1950s by local architect Arthur T. Brown, commissioned by University of Arizona faculty members Phyllis Ball and Patricia Paylore.

The home garnered attention nationwide due to its unique construction — the home is laid out in a hexagon — and its passive solar design that features floor-to-ceiling windows and moveable shade screens.

The replica of the home started with the museum hoping to “identify gaps in the collection and areas we’d like to focus on,” says Gentry Spronken, the museum’s director of marketing and communications and associate director.

Hoping to add more midcentury architecture to the museum and a local touch, museum staff reached out to the Tucson Historic Preservation Foundation, which recently acquired the Ball-Paylore House.

“The stars aligned for the project,” Spronken says.

The Mini Time Machine Museum of Miniatures is a nonprofit, with the majority of its items from the personal collection of founder Patricia Arnell.

“She wanted to share her collection with the world and share the joy that miniatures sparked for her,” Spronken says.

Working with mostly donations now, the museum doesn’t normally dip its toes into commissions — but they did for this project when enlisting help from Yurkovic, who mostly focuses on midcentury modern styles and has taught workshops at the museum in the past.

“This project fell right in my wheelhouse,” Yurkovic says.

“I looked (the home) up online right away and I just couldn’t believe what an innovative house it was,” he says. “It’s so unusual being a hexagon, for starters. We discussed, at length, the passive solar abilities that the architect Arthur Brown tied into these facilities.”

Yurkovic, who lives in Chicago, recently had the chance to stay at the house, which is available for stays on Airbnb.

“It was fascinating right when I walked in,” he says. “It felt different inside and out. And for being only a 1,200-square-foot home, it felt large and expansive and uncluttered. And looking out those back windows, at night especially, it’s like the landscape and the home continues through the walls.”

Yurkovic was originally trained as an industrial engineer and then moved into airbrush illustration. He also spent some years as an independent toy inventor, coming up with ideas and prototypes for toys.

But then he went to the Chicago International Dollhouse and Miniatures Show.

“I just knew this would be a great culmination of my skills and talents,” he says. “I had just left my last industrial design position and I was looking for something new to do. I didn’t even think twice about it.”

On impulse almost seven years ago and with the help of fellow artist Bill Robinson, Yurkovic started designing miniatures.

Then he snaps photos, creates drawings and takes lots of measurements. The Ball-Paylore House replica will be made on a half-inch scale — half of an inch is equivalent to 12 inches in the real house.

Yurkovic then moves to Phase 1 — creating a cardboard model of the home.

Then comes Phase 2, where Yurkovic starts removing the cardboard walls and building the real ones. He also does color studies.

“That gets interesting,” he says. “Just duplicating a color sample doesn’t always translate well to a miniature. There’s interpretations too, not to distort reality, but to reinforce the actual feeling and vibe of the place.”

The floors in the Ball-Paylore House are actually concrete, but Yurkovic says he can’t use concrete in the replica because it’ll crack when transporting it to the museum. Instead, he plans to finish the wood to make it look like concrete.

But Yurkovic says he tries to be true to the materials. For example, all of the wood beams in the house will be made of wood in the replica.

And because the replica will be sitting in a glass case at the museum, Yurkovic plans to design a mechanism that includes an exterior knob for visitors to turn, which will lift the roof of the home so people will be able to see the interior.

Yurkovic doesn’t concentrate on only one piece at a time, but if he did, he says this piece would probably take about a month and a half to build.

“It’s very organic,” Yurkovic says. “I know what I’m going to wind up with, but the road there is interesting.”

“I don’t know that the general public knows the process of the planning and, really, the attention to detail,” Spronken says.

Because of that, the museum plans to document on its website the process of how Yurkovic is creating the replica.

"Atomic Miniatures: Michael Yurkovic’s Modern Musings” is slated to debut on Oct. 14, which will include the Ball-Paylore House replica and a handful of Yurkovic’s other miniatures.

The exhibit is temporary, but the Ball-Paylore House replica will be a permanent addition to the museum.

Beyond the exhibit, the museum hopes to create programming that focuses on solar energy. Possible ideas include classes at the museum and an educator who can visit schools to talk about sustainable building.

“We are really excited to use that miniature to speak to so many different topics,” Spronken says.

The museum also hopes to use the miniature to highlight the work of the Tucson Historic Preservation Foundation.

“Wouldn’t it be wonderful if there was something that couldn’t be saved, but it could be preserved in miniature form?” she says.

The museum is currently accepting donations for the Ball-Paylore project, which will go toward the commission, education components and long-term maintenance of the miniature.

From canvas to cars: A list of 2021 art exhibitions at Tucson museums

Tucson museums are bringing a wide range of timely, classic and whimsical art exhibitions and installations to their physical and virtual spaces in 2021.

Things to do this March 11-14 in Tucson, Arizona including virtual events, drive-ins, drive-thrus, open-air events, at-home things to do and things to do with kids.