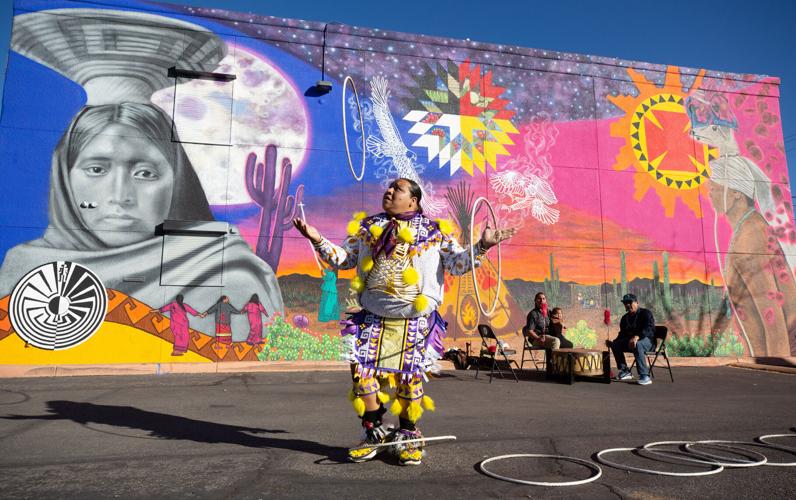 Sampson Sinquah of the drum group Wild Medicine and the 2022 World Hoop Dance Champion, performs at the dedication of the mural painted by Lucinda Y. Hinojos "La Morena," Kayla Bellerose, and Jay Lopez, at Southwest Native Trading Post on Nov. 28. 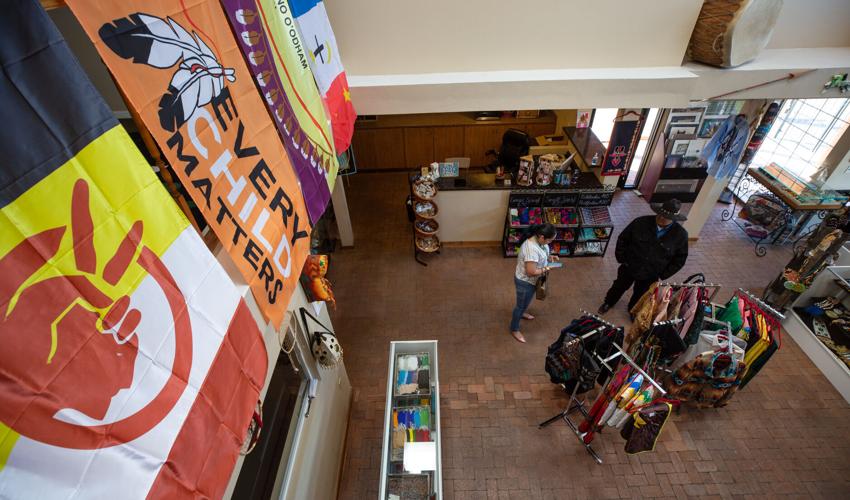 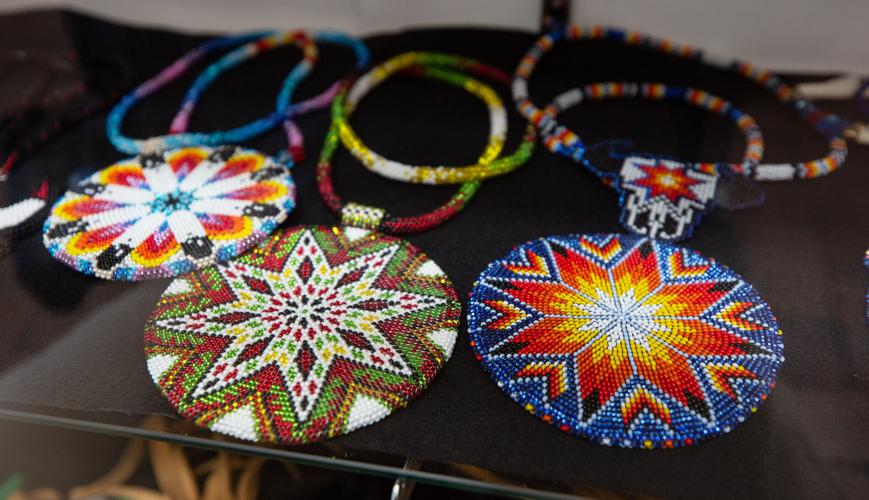 Native-American medallions, bracelets and other wearable art can be found at Southwest Native Trading Post. 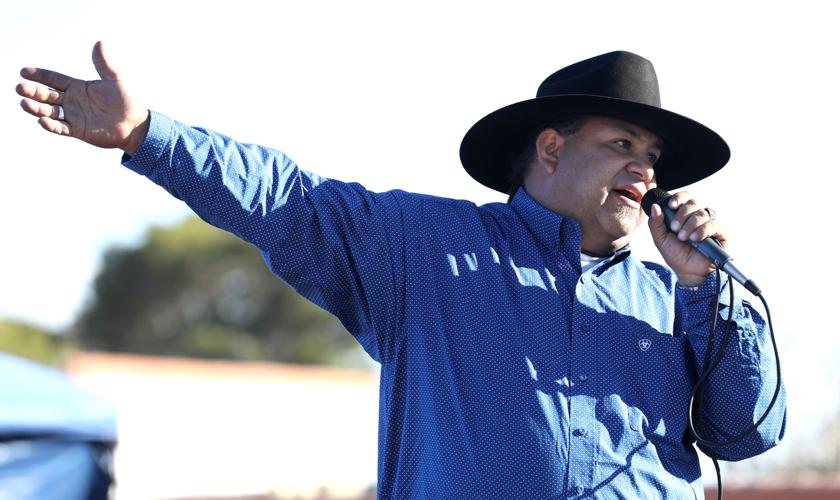 Vince Flores-Maldonado is the founder and CEO of Native Music Coalition. 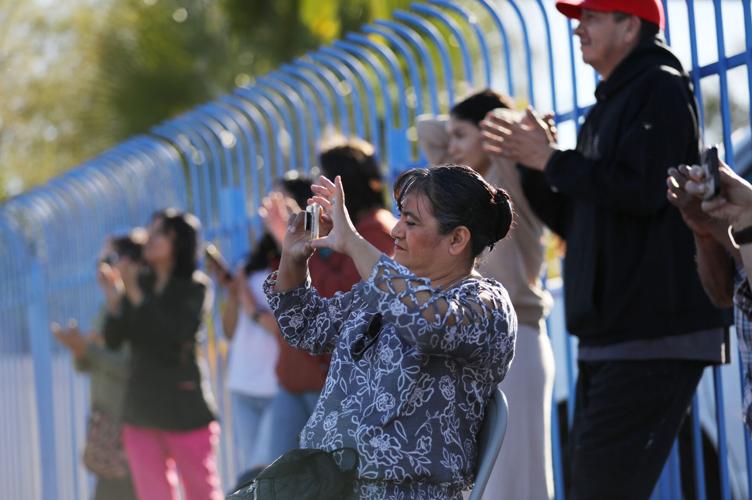 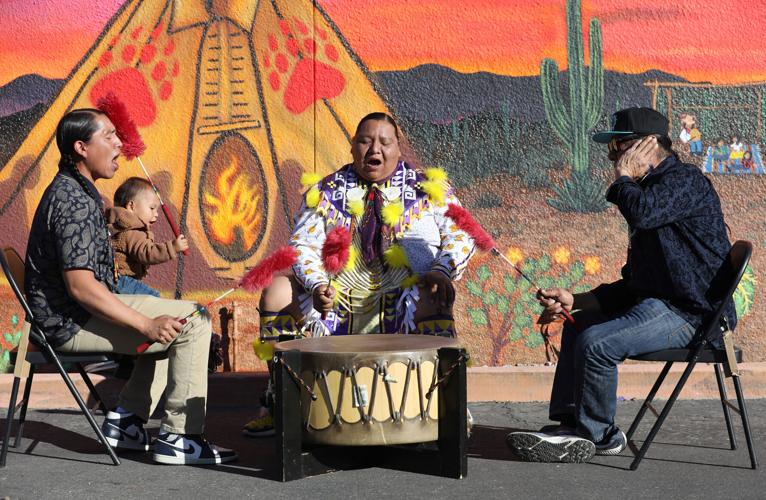 The drum group Wild Medicine – Scott Sinquah with Sonny, left, Sampson Sinquah and father Moontee Sinquah – perform at the mural dedication at Southwest Native Trading Post. The family has been singing for 20 years.

Sampson Sinquah of the drum group Wild Medicine and the 2022 World Hoop Dance Champion, performs at the dedication of the mural painted by Lucinda Y. Hinojos "La Morena," Kayla Bellerose, and Jay Lopez, at Southwest Native Trading Post on Nov. 28.

A striking wall mural featuring a Tohono O'odham woman with a basket on her head at one end, and a strong shouldered Yaqui deer dancer in the desert on the other end, were among Indigenous scenes of traditional life under a distant, yet sparkling Milky Way.

Native Music Coalition is a nonprofit organization that offers Indigenous youth, families and adults an opportunity to explore Native American culture with activities designed to heal, restore and preserve Indigenous identity. The program offers services to communities in Southern Arizona.

A celebration of the mural unveiling and the opening of the store culminated with a performance from the 2022 World Hoop Dance Champion Sampson Sinquah of Phoenix. He danced while the Wild Medicine drummers — Sinquah's father, Moontee, and brother, Scott — kept a steady beat and sang in front of the picturesque towering mural, serving as the backdrop. The family is Gila River Pima/Hopi-Tewa, Cherokee and Choctaw.

The artists who created the mural were Lucinda Y. Hinojos "La Morena" of Phoenix; Kayla Bellerose of Edmonton, Canada; and Jay Lopez of Guadalupe. Hinojos identifies herself as Chicana of Apache and Yaqui descent, Bellerose is Cree, and Lopez is Yaqui.

The crowd applauded and shouted in praise of the Sinquah family's performance and for the muralists. Many walked into the trading post and erupted into more smiles while looking at works of artisans who are members of the Pascua Yaqui Tribe and the Tohono O'odham Nation, along with other nations in Northern Arizona and South Dakota. The trading post plans to buy Yaqui pascola masks, deer eye necklaces and drums to sell in the store in the near future.

There are T-shirts displaying Native Pride, Yaqui Pride, Frybread Power, and a man in the maze image that was originally created by the Tohono O'odham as an illustration of the emergence story representing all O'odham communities. There are clothing racks with ribbon skirts and ribbon shirts that are worn by all tribes. The distinction is in the design. Racks also hold quilts, cloth handbags and blankets. The store sells kachinas, wooden flutes, moccasins, beaded jewelry and beaded hair pieces, dream catchers, and cradleboards, traditional protective baby carriers, used by many Indigenous cultures in North America. The trading post also has tribal flags in stock.

Quillwork, the art of using colored porcupine quills to decorate items, including medallions, sheaths for knives and moccasins, are on display. Quillwork is done by artists from Northern tribes, but Native Americans from various regions have adopted quillwork in their art, said Vince Flores-Maldonado, founder and chief executive officer of Native Music Coalition.

Flores-Maldonado, an aficionado of tennis shoes, has an option with Nike to customize shoes and has two styles for sale in the trading post. Native American culture is represented through the colors of turquoise, red, black, yellow and white tennis shoes. Some shoes have the lettering MMIW, which stands for Missing Murdered Indigenous Women, and others carry NDN VBS, meaning Indian Vibes. The shoes come in adult sizes, and more styles will be carried in the store depending on sales. These shoes range from $160 to $200. Prices of other items in the store range from $5 to $1,200.

Flores-Maldonado, an artist who began the coalition’s work with Yaqui families in 2016 — two years before it became a nonprofit — received help from other Indigenous artists who recognized Western medicine was not treating the spiritual needs of Native American families. He and other artists held events for youth and families, and they saw a cultural yearning among participants in search of Native American spiritual healing as an integral part of treatment that included substance abuse, depression, physical and emotional abuse, anxiety and bereavement.

Now, Native Music Coalition has an annual budget of $720,000 from grants, donations and reimbursements for services through the Arizona Health Care Cost Containment System, the state’s Medicaid program.

The coalition has a Native American staff of 35, including therapists, behavioral health technicians and counselors who are members of the White Mountain Apache Tribe, Pascua Yaqui Tribe, the Navajo Nation and the Tohono O’odham Nation.

They offer treatment at a Wellness Center where activities include painting, drum- and- gourd-rattle-making, beadwork and talking circles designed to help clients connect to their emotions, resulting in soothing and calming effects. These artisans, who utilize the coalition's housing program, could sell their pieces at the trading post and keep 100% of their sales. Once they are discharged from the program, they could use their money to start their independent living, said Flores-Maldonado.

The organization purchased the building that houses the trading post, and also serves as its administrative headquarters on the second floor, for $480,000 in May. Native Music Coalition's other location at 811 S. Sixth Ave. where it runs its programs now has more space with the relocation of its administrative offices, explained Flores-Maldonado.

6 local makers and artists who give back to good causes

A list of local makers and artists in Tucson, Arizona who give back to good causes through donations from the proceeds of their handcrafted products.

Murals in the Tucson, Arizona area continue to fill our city's walls with beauty. Here's where to find some of them!

Rain in the Sonoran Desert is a hard scent to explain, but Tucsonans know it well. Here are a handful of Tucson-area makers who sell soaps and candles that smell like our glorious monsoon season.

23 very Tucson gifts to give this holiday season 🎁🌵

Think little free libraries, but with art: Tucson is home to a tiny free art gallery

The Museum of Contemporary Art in Tucson, Arizona, is now home to a tiny free art gallery dubbed Mini MOCA, where passersby can take and leave miniature pieces of art at no cost.

Las Mujeres Verdes are a group of four Latinas looking to uplift local makers. They host monthly markets in collaboration with organization Flowers & Bullets where you can find food, handmade goods and more.

A shared retail space is giving local businesses the opportunity to try their luck in downtown Tucson. Businesses at Proper Shops include a crystal shop, a small art gallery and a spot for jewelry.

The Koru Multicultural and Diverse Library opened in Tucson, Arizona in August at The Historic Y. The library started in South Korea by Mia Lee and Katrina Katrina Kerstetter in 2016. The library aims to connect people to globally diverse cultures through picture books.

Each of the two Tucson-based artists receive an unrestricted $50,000 cash award from United States Artists, a Chicago-based arts funding organization.

The agreement allows for appointing tribal prosecutors in criminal cases committed by non-Indians against tribal members on the reservation.