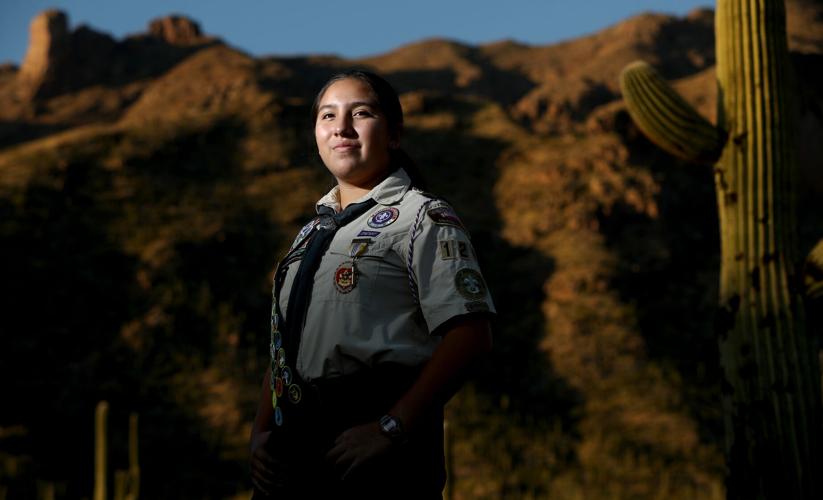 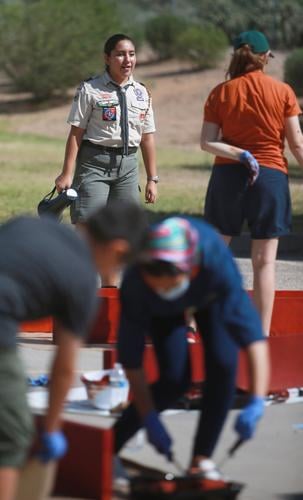 Ivanna Viloria Enciso, on her way to check in with the paint station as a part of her Eagle Scout project at Painted Sky Elementary School. She created this project to give back to the community that has helped her and so many other families throughout the years. 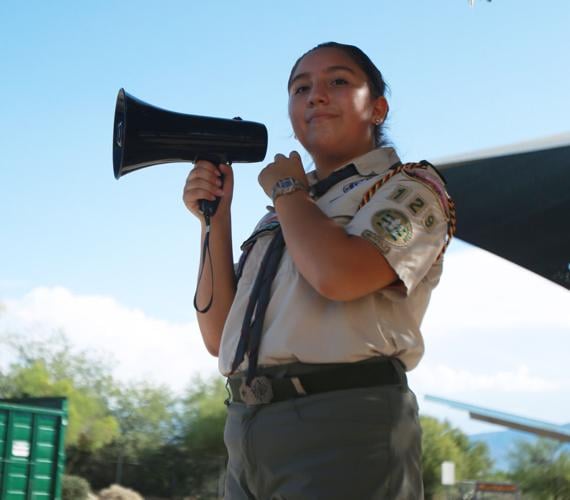 Ivanna Viloria Enciso created her Eagle Scout project to give back to the community that has helped her and her brother in their transition to the United States.

Step aside, boys. There’s a new Eagle Scout in town and she’s ready to spread her wings.

Ivanna Viloria Enciso made Southern Arizona history this month by becoming one of the first female Eagle Scouts in Pima County.

The 14-year-old officially earned her Eagle Scout rank on Oct. 13 after completing the last step in the Eagle Scout process — the board of review.

Now, she is one of the youngest female Scouts to earn the Eagle Scout rank at the Tucson chapter of Boy Scouts of America (BSA), Catalina Council. She is also one of the first female Eagle Scouts in Pima County of Latina heritage.

The first two female Eagle Scouts in Pima County were inducted on Feb. 8.

Earning the title of Eagle Scout is the highest rank that one can achieve within the Scouts and on average, only 6% of Scouts earn the prestigious rank. With over 2 million Scouts in the United States, Ivanna says that she knew she wanted to be part of the 6%.

To become an Eagle Scout, one must take on leadership roles in their communities, obtain a minimum of 21 merit badges and complete a large community service project.

Ivanna completed her community service project on Sept. 25 at Painted Sky Elementary School, where she helped build a Gaga ball pit for students at the school. She began planning her project in March and raised over $2,000 for her project through a GoFundMe fundraiser. Gaga ball is a variation of dodgeball but instead of playing in an open space, the players participate in an enclosed pit.

She chose to do her project at Painted Sky Elementary School because it's where her younger brother attends, and the faculty of the school had been extremely helpful with getting her family acclimated to American culture upon their arrival to the United States.

Staying true to the new inclusivity values of the BSA, Ivanna decided to make the Gaga ball pit wheelchair accessible.

“It has an access door for kids in wheelchairs so that they can also get included in the game, so that all the kids can develop their social skills, their emotional skills and their physical skills,” she says.

As for Ivanna’s merit badge requirement... well, that shouldn’t be an issue with the 36 merit badges she has snagged along the way.

While most Scouts who earn the Eagle Scout rank do so in their late teens, Ivanna has done it at 14.

She recalls hearing about an Eagle Scout who didn’t do his board of review until five hours before he turned 18 and knew she didn’t want to wait that long.

“I didn't see that in myself,” she says. “I just knew that I could get it sooner if I was completely dedicated to it. So now here I am, I'm 14 years old and I'm one day away from doing my board of review.”

From Mexico City to Tucson: the Scouting journey continues

Scouting has played a vital role in Ivanna and her family’s lives.

Ivanna and her family immigrated to Tucson from Mexico City in December 2018 due to her mother’s career. While in Mexico, Ivanna was heavily involved in the Asociación de Scouts de México, the country’s largest and oldest Scouting organization. She became a Beaver Scout, which Ivanna describes as the “tiny, tiny, Cub Scouts,” at 4 years old and moved her way up through the ranks.

Ivanna often participated in Girl Scout-type activities such as sewing and connecting with other girls, but she soon realized that she enjoyed more outdoor activities, such as camping and hiking.

Scouting in Mexico also differs from the United States because it’s primarily a co-ed organization. The Boy Scouts of America recently jumped on board with becoming a co-ed program in 2019 when they rebranded to Scouts BSA, an inclusive organization that would allow girls to join and earn the Eagle Scout rank.

Upon arriving in Tucson, it was a no-brainer to have Ivanna join the local BSA council.

“When we moved here we tried to continue this Scouting life for her because we know that this is really a great way for kids to grow and to become good citizens,” says Ivanna’s mom Susana Enciso.

After joining the BSA in early 2019, Ivanna says her communication and leadership skills have greatly improved and that she has “broken out of that shell” since coming here.

Even though she loves the outdoor activities that the BSA offers, her favorite part of being a Scout is meeting new people who she otherwise would have never met.

“Tools for the future”

When Ivanna isn’t Scouting, she’s focusing on academics since she just started her freshman year at Catalina Foothills High School. She’s currently involved in five clubs at school, including the National Art Honor Society, Model United Nations, March For Our Lives and the poetry and drama clubs.

Outside of school, she participates in weekly volleyball camps in hopes of making the Catalina Foothills volleyball team next year.

Although she just started high school, Ivanna has her sights set on the future. She plans on attending college to pursue a STEM-related career.

“I know I want to do chemistry or biology, possibly engineering, but other than that, I'm still kind of just finding that path,” she says.

Ivanna’s mom says that the BSA has provided her daughter with “tools for the future,” like communication and leadership skills, that will set her up to be a successful and happy person in life.

If you know someone considering joining the Scouts, Ivanna encourages you to give the BSA a chance.

“Just join! It's an incredibly gratifying experience and it has formed such an important part of my life,” Ivanna says. “At least 50% of memories that I have, within the past two years, are Scouting-related. You make so many more new friends. You meet so many new people. You get to learn about cool outdoor stuff. You would probably survive a zombie apocalypse, you know, if it were to happen. And you just get so much out of it.”

Unidas: An after-school program that helps teens advocate for social causes and change

Tucson kids can now virtually meet award-winning authors and illustrators via Zoom during Imagination Fridays. The fall webinar series is organized by the Tucson Festival of Books and Worlds of Words.

Since 1986, Youth On Their Own has helped support youth experiencing homelessness in Pima County by giving them the tools to graduate high school.

'Why are all the winners boys?': Tucson nonprofit helps underrepresented kids explore STEM

Every year, students across Tucson and Southern Arizona participate in the SARSEF Regional Science Fair where they get to conduct research projects to represent their schools.

Kids and teens can submit their work to this author contest until Dec. 16

Children and teens in the Tucson area can submit their work to the 13th annual Young Authors contest, open now through Dec. 16.

Students in Imago Dei Middle School's THREAD program pitched a new product for tajin-pickled vegetables and fruit. The class is taught by Frank DiPietrapaul, who went through the StartUp Tucson Recipes for Success Food Accelerator program.

Tucson's newest bookstore, Littlest Bookshop, has hundreds of books for children of all ages. The shop's grand opening is set for New Year's Day.