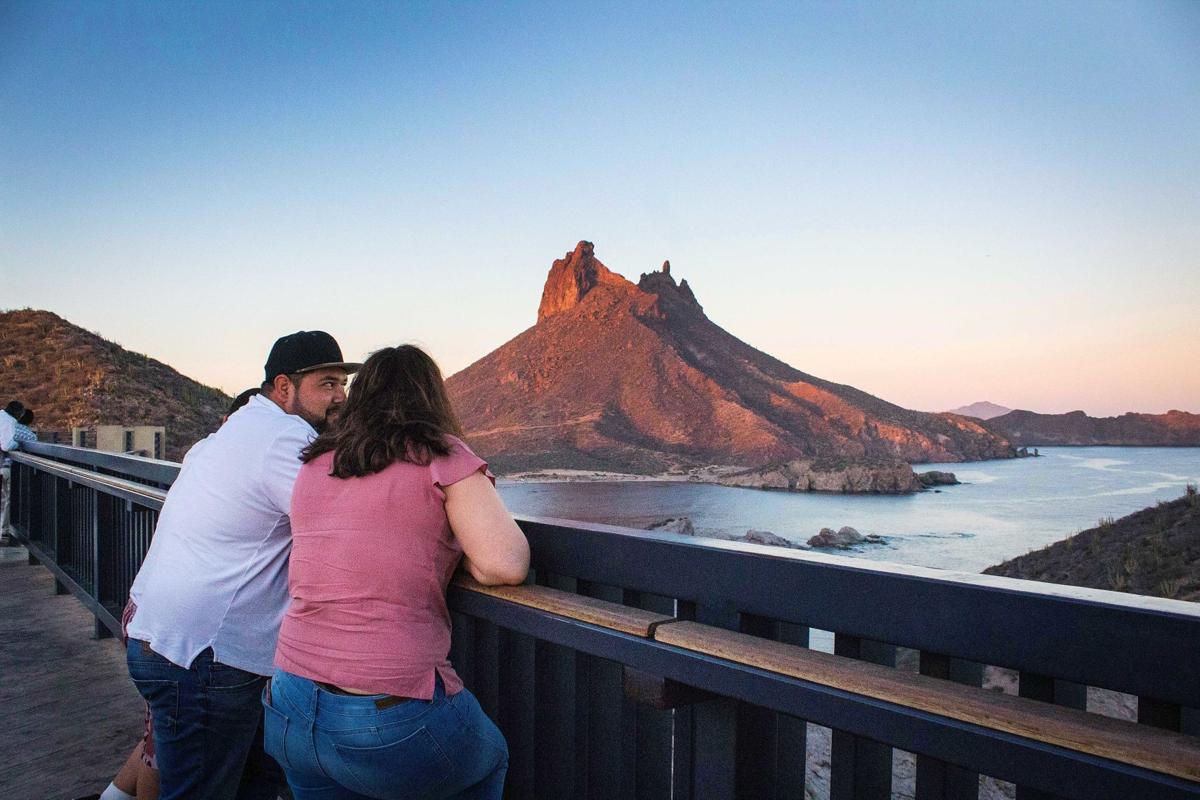 A couple overlooks a beach sunset from the Mirador San Carlos, a walkway that hangs above the Gulf of California. San Carlos, Sonora, is a relaxed beach town with great food, amazing sights and fun things to do. 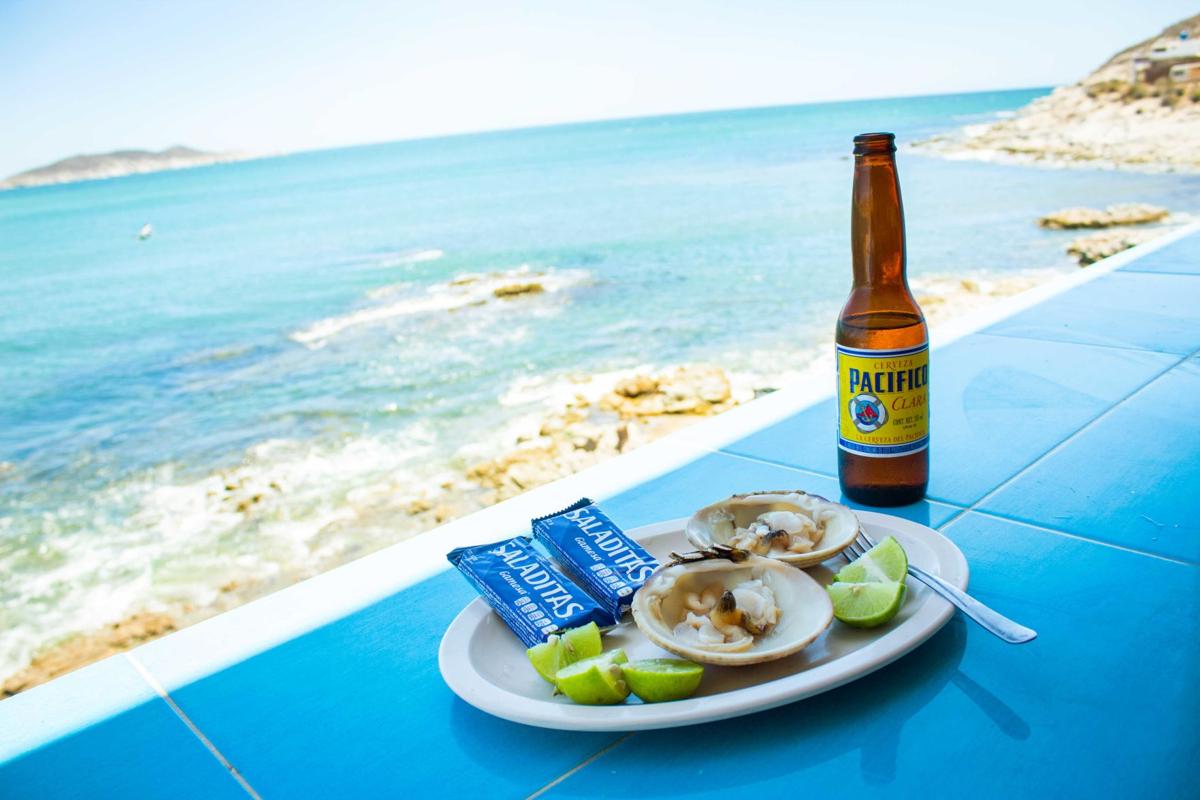 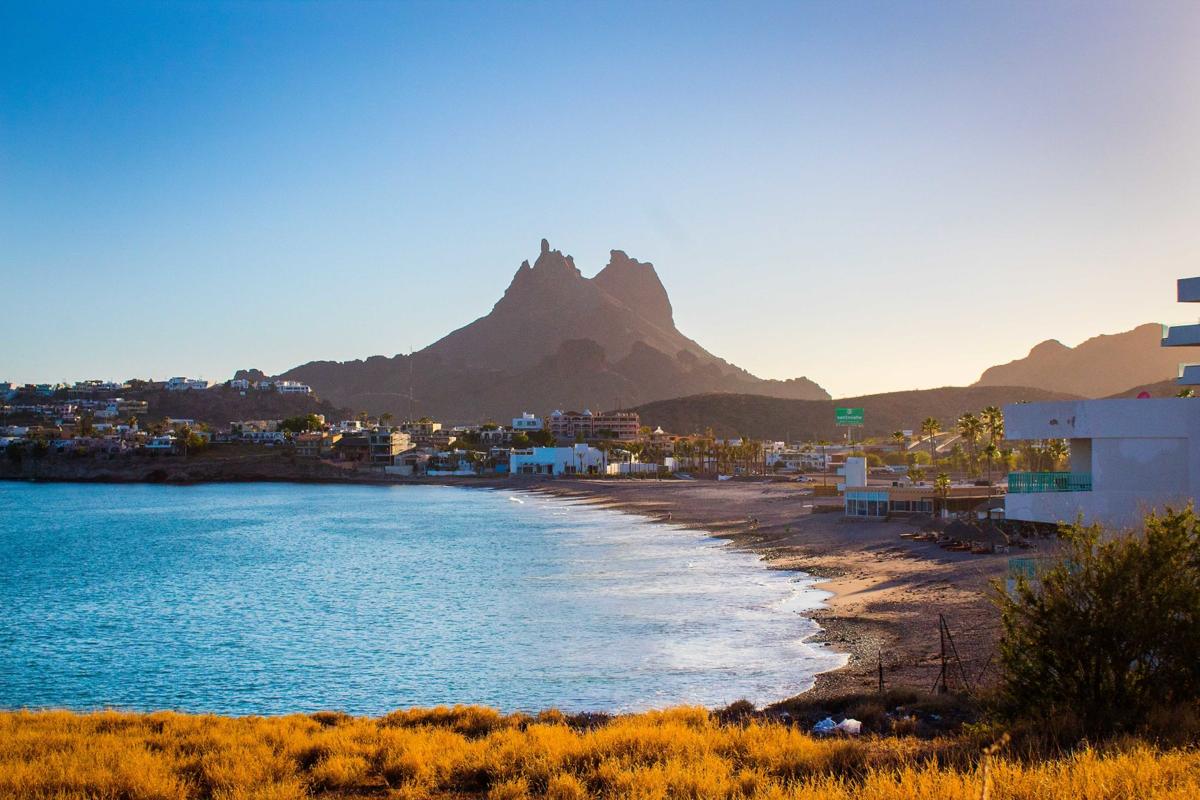 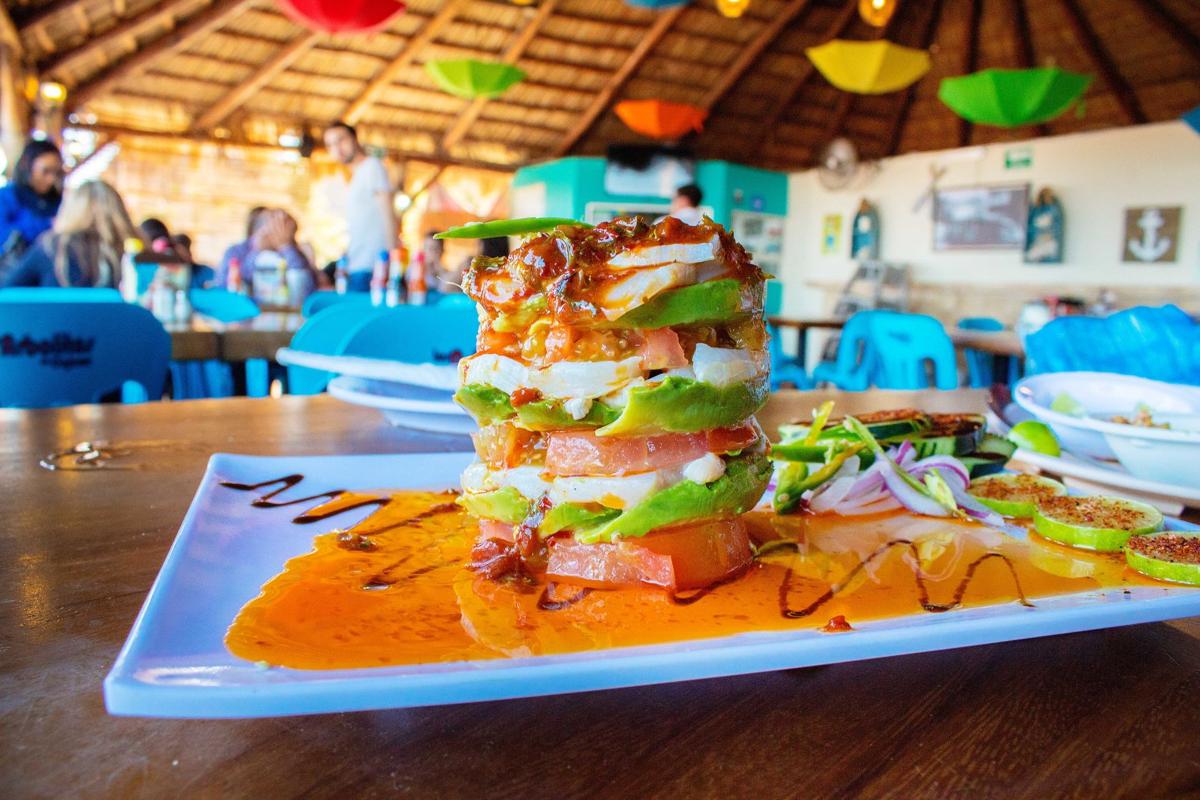 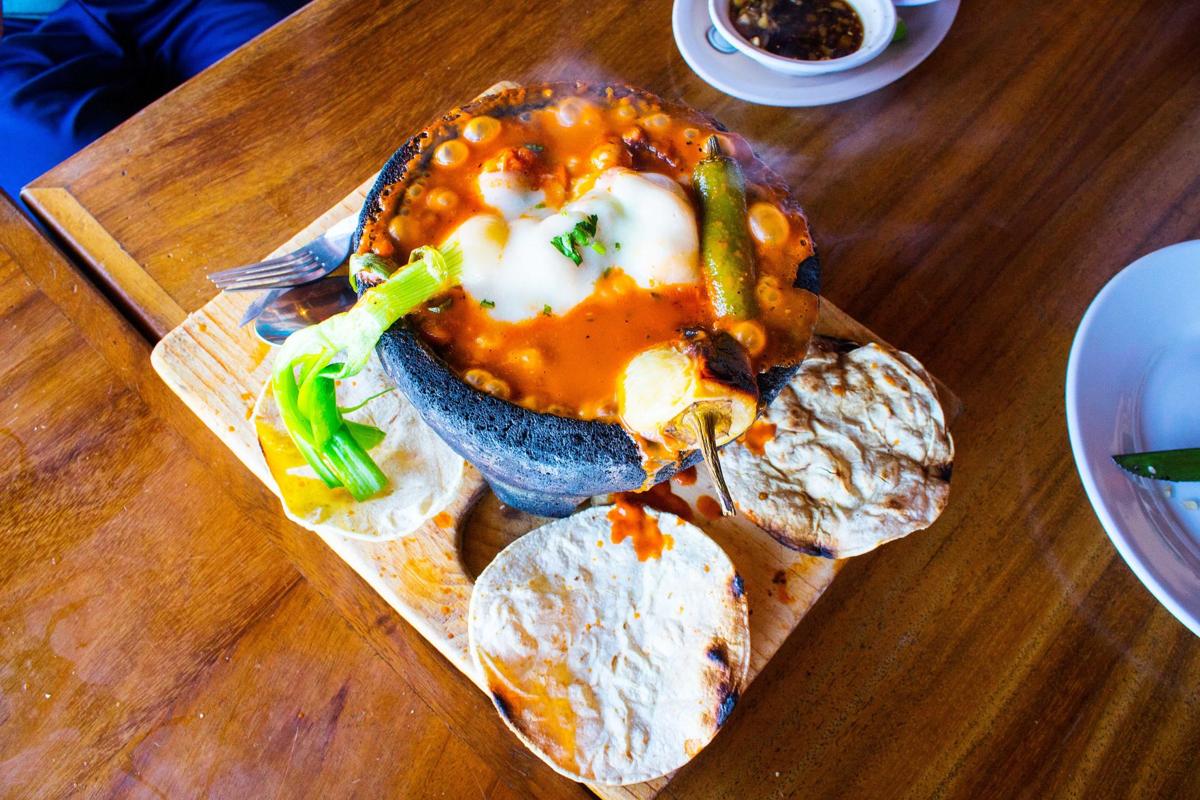 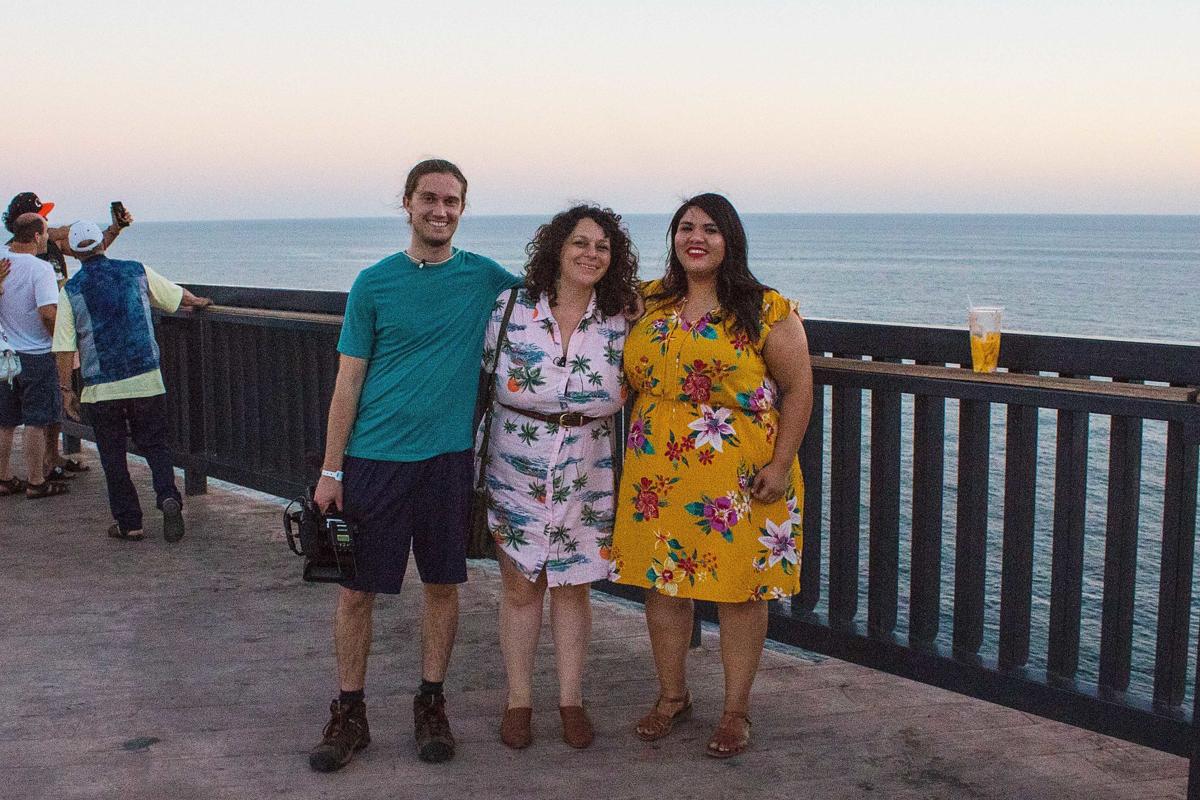 Nick, Andi and Sam at the Mirador San Carlos.

San Carlos is the hidden gem of the Sonoran coast, full of rocky cliffs jutting from the water, towers of fresh seafood and quiet evenings watching the sunset. Unlike its touristy neighbor to the north Rocky Point, this small beach town has stunning desert panoramas and “tranquilo” vibes.

This little resort town is connected to the larger port city of Guaymas, which produces much of the shrimp and seafood used in Arizona restaurants like Mariscos Chihuahua. Its clear waters make it a hotspot for snorkeling and scuba diving. But the town also attracts visitors from the state’s nearby capital of Hermosillo.

With a cheaper vacation price tag compared to other nearby beach destinations, San Carlos is the perfect place for thrifty travelers. And it’s only about six hours from Tucson, which makes it a great place to check out during a three-day weekend or have a mini adventure.

We (Andi and Sam) recently took the trip out to this Sonoran paradise and have a few tips and ideas for anyone else looking to make the jaunt to San Carlos.

Here’s a little guide to get you beachin’!

How to get there

Be sure to pack your passport! And if you're driving, remember to get Mexican car insurance — we purchased ours online through Sanborn’s before we left, but the company also has a couple offices in Nogales, Arizona in case you’d rather do it in person.

Head south on the I-19 toward Nogales and take the Dennis DeConcini Crossing port of entry into Mexico. This will have you driving through the city of Nogales, Sonora. There are plenty of banks along Avenida Alvaro Obregon, one of the main streets in town, for you to take out pesos. (P.S. If you’re hungry, you can stop for a breakfast burrito at Burritos Hass. We recently did a guide on Nogales and it was one of our favorite places.)

Once you’re out of Nogales, you’ll spend the next couple of hours driving through small Sonoran pueblos like Imuris and Santa Ana, where you can stop for a massive fried milanesa platter at Restaurant Elba. Along the way be prepared to stop and stall for some construction, but in general the roads are pretty safe for traveling. Continue on Interstate 15 South through Sonora’s capital Hermosillo, and you’ll be seeing the ocean within a couple of hours. Once there, San Carlos is very easy to navigate as most of the sites are on a single road.

San Carlos is significantly smaller than Rocky Point, but still has some sizable resorts along the scenic Los Algodones Beach. (There’s also a big condo and AirBnB scene, but you might wanna book early for that.) We ended up at the showy San Carlos Plaza Hotel, which was a steal for about $80 a night. The pool has water slides and an entire pirate ship, and all the rooms face out toward the ocean. Enough said.

The San Carlos and nearby Guaymas area is known for its stellar seafood, especially fresh marlin and the massive shrimp known as “camarones gigantes,” which are known throughout Mexico. During our summer visit, we were told that sea bass and chocolate clams were in season, so look out for those too.

Our favorite meal was at one of the seafood spots that line the main boulevard. Los Arbolitos de Cajeme is actually part of a local chain based in the nearby Ciudad Obregon. The palapa setting is super casual, but their food is a step above what you’d find at most mariscos joints.

Los Arbolitos is known for its Torre de Callo (seen above), a gorgeous tower of scallops, tomatoes and avocado that’s dressed in a fruity citrus vinaigrette. You don’t wanna miss this one, but we won’t blame you if you go for the bubbling brew of shrimp in a buttery tomato sauce known as the molcajete Don Carlos. The grilled octopus served on a cast iron pan is also fantastic.

If you’re in the mood for a little drive, head ten minutes west of town to the small fishermen’s community of La Manga. This little beach hamlet has a rugged appeal, with smaller beachside restaurants operating out of people’s houses. At the end of the strip, you’ll find the much grander Restaurante Doña Rosita, which over the past 28 years has become a landmark of the area. The menu changes daily depending on what the fishermen caught in the morning. The day we visited we feasted on several types of shrimp and the giant raw clams they call Almejas Reina.

The restaurant also has a giant staircase that leads from its patio down into the rocky shore below. It's a great place to explore before getting back in the car.

With its clear waters, San Carlos is the ideal spot for snorkeling and scuba diving. (Andi actually got her PADI certification here when she was a teenager.) The Sea of Cortez has an incredibly diverse selection of sealife that led Jacques Cousteau to dub it “the world’s aquarium.” For info on tours and where to go, check out Gary’s Dive Shop or El Mar Diving Center.

Boating, fishing and kayaking are also fun water activities people like to do when they visit San Carlos. We heard from a local one of the best things to do in town is to take boat tour where guests are treated to food, booze and beautiful coastal sights.

On land, San Carlos has a number of jaw-dropping beaches that are just as enchanting as the Sonoran Desert that surrounds it. Here on this coast, sharp cliffs and tall cardon and organ pipe cactus crash into the bright blue ocean. If you just want to soak up the sun next to the shore, be sure to visit Algodones Beach, which is located near the resort strip east of town. The word “algodones” means cotton, and after spending a morning strolling along the super-soft sand, we totally understand the namesake. There are even white sand dunes you can scale nearby. Fun fact! The 1970 movie, “Catch 22” was filmed here.

The Baja-meets-Sonoran Desert ecosystem here also makes San Carlos an excellent place for hikers. The steep hike up the volcanic peak Cerro Tetakawi may remind you of Picacho Peak in Arizona, because it offers panoramic views of the city and ocean below. Bring your gloves for this one; you’re climbing up ropes!

However you decide to spend your day, make sure to take some time to visit the town's notable lookout point Mirador San Carlos. This local gathering place was named one of the top ocean views in the world, according to “National Geographic.” Looking out onto the ocean, you can search for whales and dolphins, or take a trail down to the rocky cliffs below. We were distracted by the mango stand though, because after this long day, we needed a treat!

Road tripping around Saguaro National Park West: Where to visit during your desert adventure

Just a few minutes outside of Tucson, Saguaro National Park West is an iconic desert landscape that attracts visitors from all over the world.

Have any plans for the long weekend? From quick trips to places where you can really get awa…

5 unconventional spots that make Sierra Vista worth a trip

Look closer at Sierra Vista, it has a unique Arizona flair

It's time to take a break and go on a road trip — someplace cool, someplace adventurous, and someplace close because I have to work tomorrow morning. For us that means heading two hours east to the historic and picturesque town of Bisbee.

Things to do, refreshing stories, food and more. This summer is going to be way cool!

Hit them up during their grand opening June 17.

This story was created by #ThisIsTucson and underwritten by Jack Furrier Tire & Auto Care, with 50 percent off road trip services. Thanks …