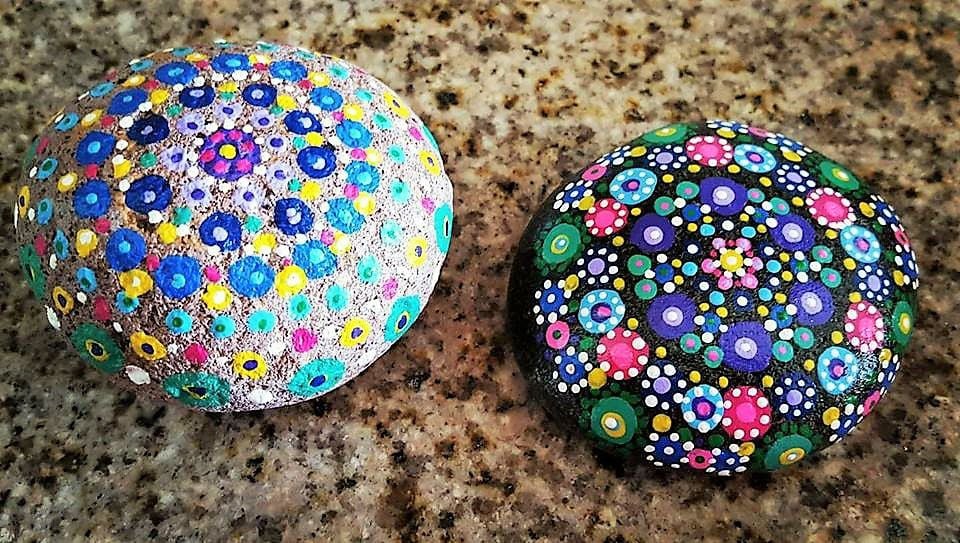 The Facebook group Hide Tucson Rocks creates a space for people to show rocks that they've painted and found. 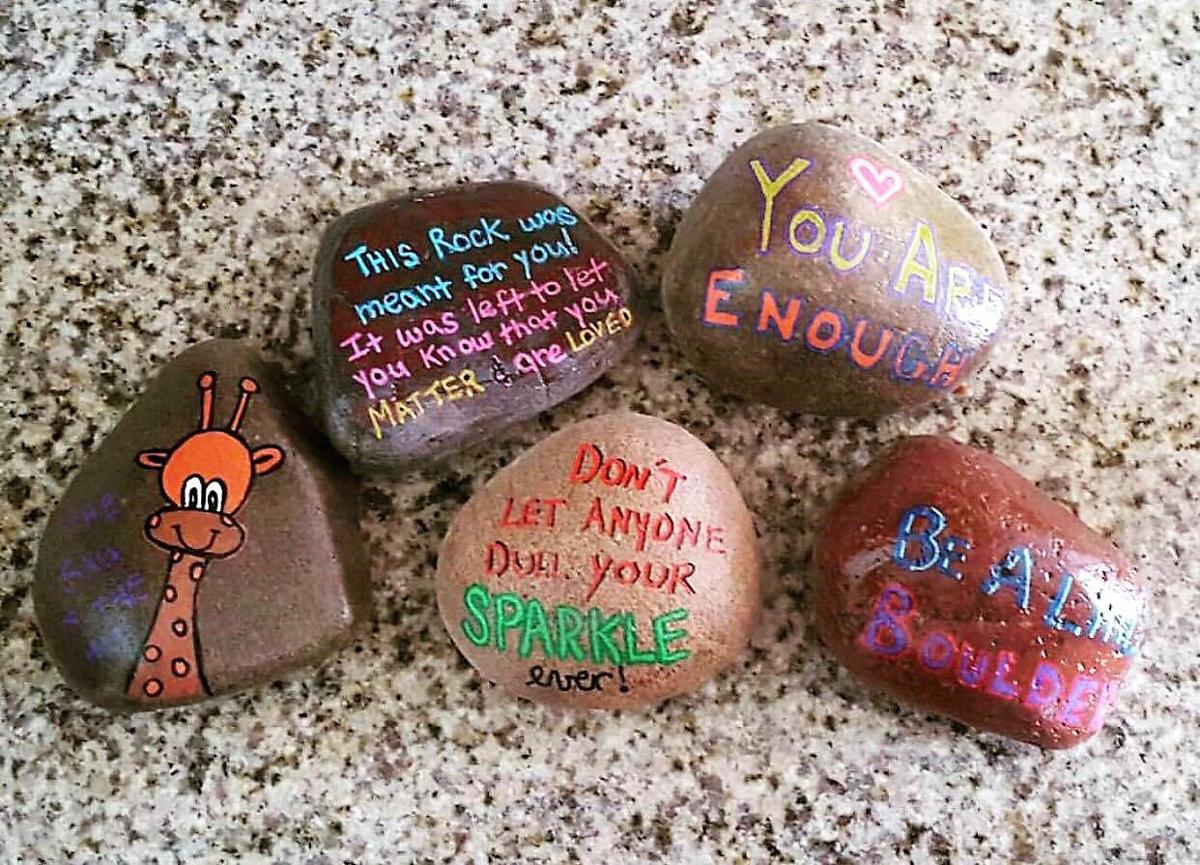 Some people paint incredibly elaborate scenes while other stick to simple phrases and images. 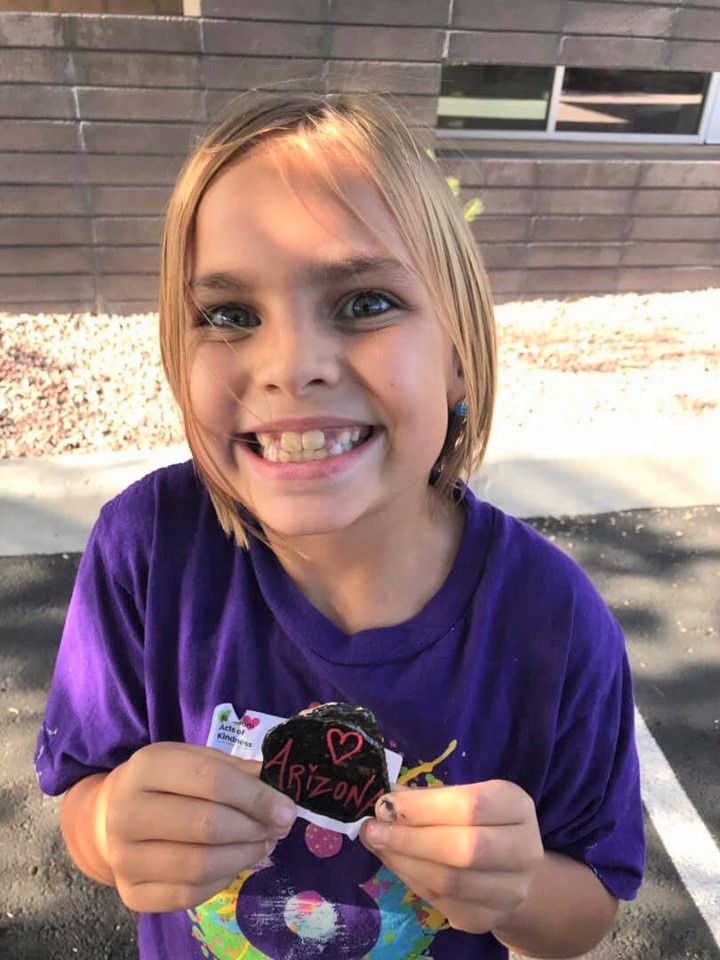 Megan Ahaszuk's daughter Maci poses with a rock she found.

As far as Megan Ahaszuk is concerned, kindness rocks.

In April 2017, the Tucson mom started a Facebook group for people to rally around a simple way to spread encouragement — painting and hiding rocks. Since then, Ahaszuk's Facebook group Hide Tucson Rocks has grown to about 6,800 members. And she says she adds 100 to 200 new members every week.

A friend from Washington introduced her to the movement, and she wanted to see it grow in Tucson.

"I'm really involved in my church and the community, and I just wanted to offer a random act of kindness for others that wasn't necessarily going to break the bank," says Ahaszuk, 35.

The idea is simple. Paint a rock with encouraging words, a cheerful image or fun colors (and the handle @HideTucsonRocks so people can find the group later) and then hide it somewhere. In the Facebook group, people share photos of the rocks they've painted and found. It's like a giant scavenger hunt that never ends.

Megan Murphy, a life coach in Massachusetts, is credited with starting the rock hiding movement after she used a Sharpie to write several positive messages on rocks she later left on the beach. A friend found one of those rocks and texted Murphy to tell her the discovery had made her day. That was 2015 and the beginning of The Kindness Rocks Project, which has inspired hundreds of groups around the country and beyond.

"A lot of people want to do good for others but may not have an extra $10 to pay for someone's meal or might not be able to pull over and help someone on the side of the road because they have small kids," says Ahaszuk, adding that she remembers being a single mom with a tight budget. "My small way of trying to make someone's day ended up evolving into this huge group."

In the past, Hide Tucson Rocks members have gathered for rock-painting parties and Ahaszuk hopes to make those regular.

No artistic background is necessary, but scrolling through the Hide Tucson Rocks Facebook group reveals some rock-sized masterpieces of everything from Tucson sunsets to "Finding Nemo" characters. Anything goes as long as it's kid-friendly. Any rocks with adult-centered themes (ie: alcohol) should be hidden in grown-up locations.

Not an artist herself, Ahaszuk tends more toward inspiring phrases or "clip-art," she says.

"I've had my kids paint a rock one solid color, and there's nothing special about it except that a child made it," says Ahaszuk, who works as a teacher's aide. She adds that her kids, ages 3 and 8, love painting, hiding and hunting for rocks.

When Jennifer Ledon, 41, moved to Tucson in May, she joined the group.

"I'm an EMT, so I have a lot of empathy for people who are in the most vulnerable times of their life," says Ledon, who wanted to start painting rocks to uplift people in the midst of those difficult circumstances.

To do that she, partners with a local hospice, regularly replenishing a basket of kindness rocks for staff, patients and families who pass through.

Ahaszuk keeps a bin of painted rocks in the back of her car to hide whenever she runs errands. She gets the rocks she paints in buckets from a local landscaper.

Both her group and The Kindness Rocks Project have guidelines posted about where to hide rocks and also suggest using non-toxic paint.

Ahaszuk encourages people to check with owners before leaving a rock inside a business or on private property and to never hide it somewhere where it might damage a lawn mower or hurt someone. Also, remember snakes. And while one colorfully painted rock hidden in nature might be cute, dozens become a problem. Never leave them in state or national parks. The Kindness Rock Project recommends abiding by Leave No Trace principles.

"I feel like this movement was bigger than I realized when I started this," Ahaszuk says.

About a month ago, someone posted in the Facebook group a photo of one of the first rocks Ahaszuk hid — a little hedgehog.

"A little girl found it outside a pediatrician office completely on the opposite side of town," she says. "I hid it near Cortaro and it ended up by Palo Verde. ... It was neat to know it had passed through multiple hands in the last two years before it got to this little girl who wanted to keep it."

57 amazing Tucson murals and where to find them

Tucson murals continue to inspire hope and filll our city's walls with beauty.