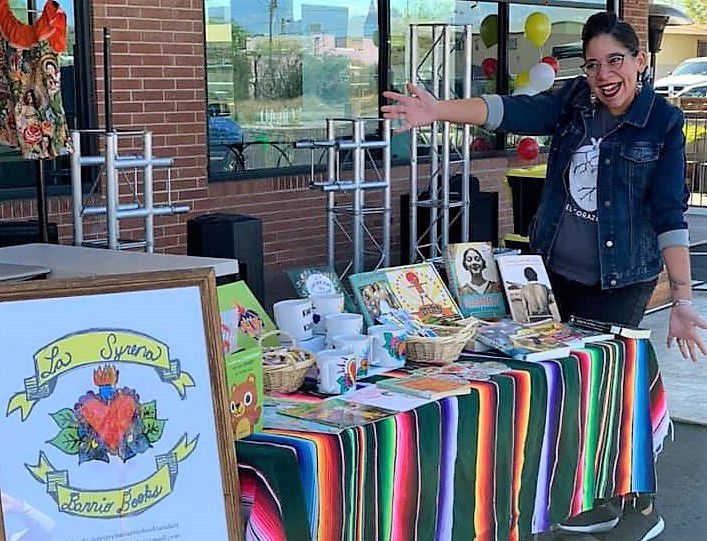 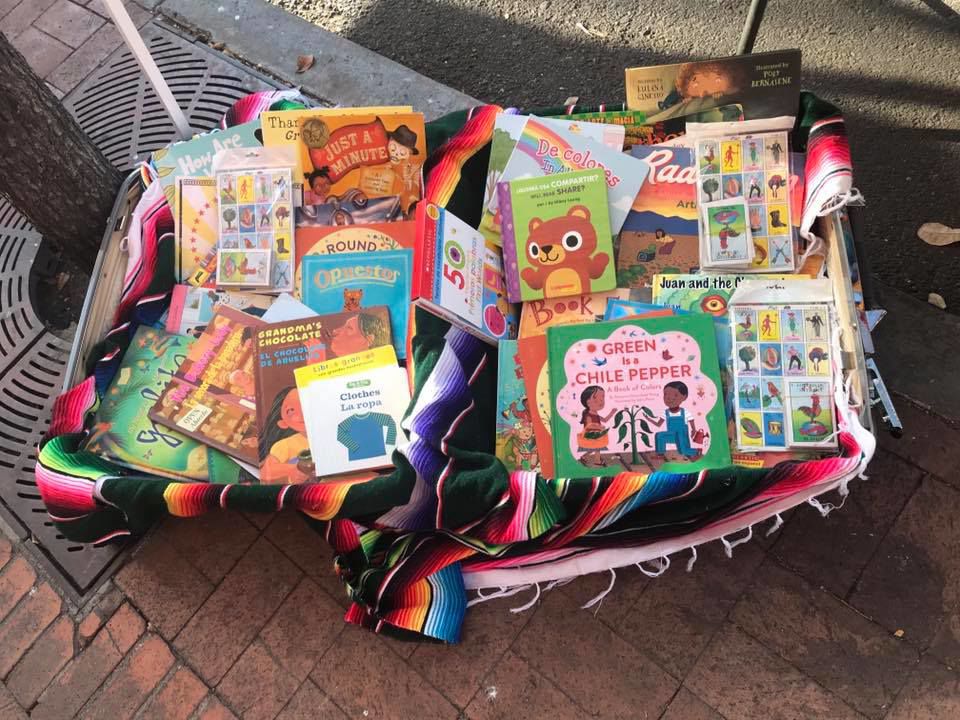 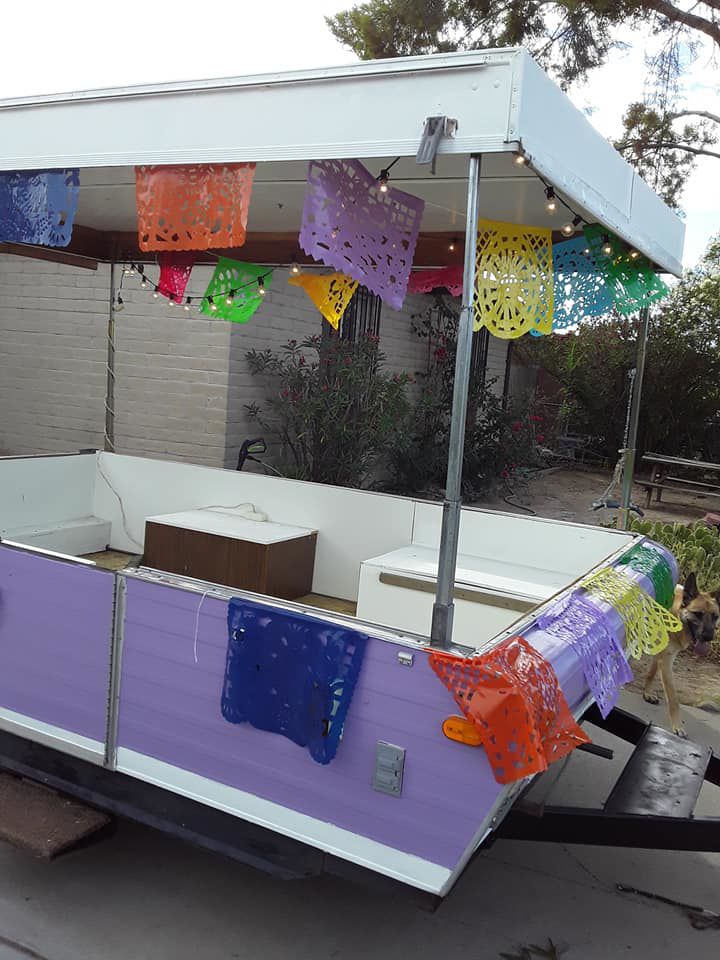 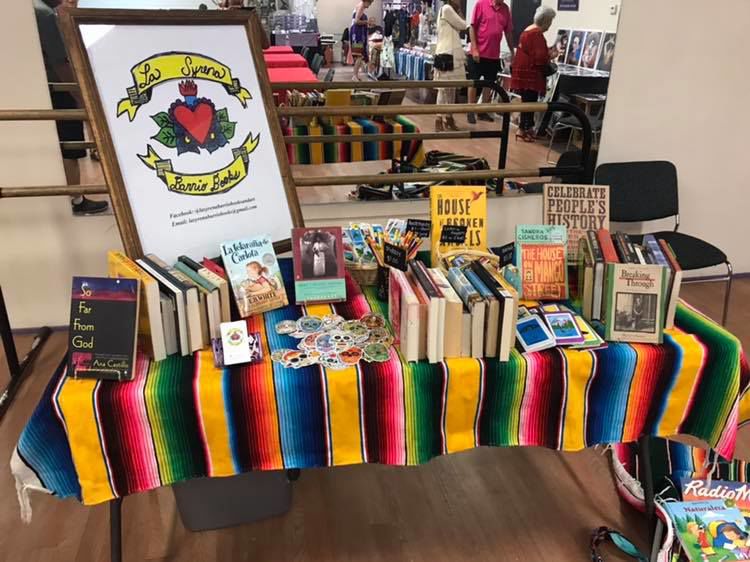 La Syrena Barrio Books has about 200 books in its inventory.

When Syrena Arevalo-Trujillo launched her pop-up book shop, she did it to connect people with the kinds of books she struggled to find growing up.

La Syrena Barrio Books sells books for all ages, many bilingual, written by Latinx authors or reflective of that community.

"I'm always going into different book stores looking for things that I'm interested in or books that reflect me and my life," says Arevalo-Trujillo. "It's just really hard to find those, so I want to be able to find those books for people who are in the same boat as I am."

Arevalo-Trujillo, 28, started selling books at her pop-up shop in April at the anniversary of American Eat Co. and Market, which she can walk to from her home. She grew up here.

"My aunt is my landlord, and my nana and tata live behind us and my tio lives down the street," she says. "My tata actually owned the barbershop that's right next to American Eat Co. for a long time ... This is my community and I love it."

Arevalo-Trujillo grew up as a reader, but she couldn't always find books that spoke to her as a Chicana. Exceptions include "Bless Me, Ultima" by Rudolfo Anaya and the American Girl books about Josefina.

"When they were growing up, we were not your typical family," says Anna Tarazón, Arevalo-Trujillo's mother. "I was a single mom raising two girls, and I wouldn't allow Barbies into our house because they didn't look like my girls. And that was reflected in books and reading materials, too. So to find characters that are similar to our community is huge."

Although she dreamed of becoming a librarian one day, Arevalo-Trujillo eventually studied history and Mexican American studies at the University of Arizona and worked in the university's Worlds of Words global children's literature library.

With the pop-up shop, "my love of books plus of Mexican American studies kind of meshed together."

She also taught sixth graders for several years at La Paloma Academy, where she saw up close the necessity of connecting kids with relatable books.

"Being able to see a book they can relate to, they'll want to keep reading and find more books in that neighborhood," Arevalo-Trujillo says.

For her, reading has served as an anchor, sustaining her through a diagnosis of pulmonary hypertension almost seven years ago. Now, as she awaits a lung transplant, she says the shop gives her something to look forward to.

Arevalo-Trujillo stocks her shop partially with thrift store finds and plans to add Native American literature to her inventory, too. She started by selling titles from her own collection. She currently has about 200 books in her inventory, she says.  Beyond her American Eat Co. debut, she has also set up the shop at several Second Saturdays downtown and at Viva Performing Arts Center.

Soon, she'll be able to take her books anywhere. Her mom and other family members recently surprised her by transforming a camper into a future bookmobile.

"At first I wanted a brick and mortar, and I wanted to do something on South Fourth Avenue, because this is my barrio, my neighborhood, but now I can pick up and go to a different barrio that might need the same materials," she says. "I can go to Barrio Hollywood or Barrio Anita or Barrio Viejo if I needed to expand that range."

La Syrena Barrio Books doesn't have any pop-up events scheduled in the immediate future, but you can shop online at la-syrena-barrio-books.square.site and follow on Facebook for information about future events.

Pulling a canvas red wagon loaded with books of all sizes, Amalia Reyes walked up the ramp i…

Connect with local businesses at the MotHERHOOD pop-up

This coming school year, students at Homer Davis Elementary will have a novel reason to be on their best behavior.

Chulas, a new shop off 4th Ave, celebrates women makers from the Southwest and Mexico

For more than three years, Marisol Flores-Aguirre helped women launch their own businesses.

The work of this collection of Tucson, Arizona based Latinx makers is particularly unique because it's largely inspired by their love and pride for their culture, language and life in the Sonoran Desert.