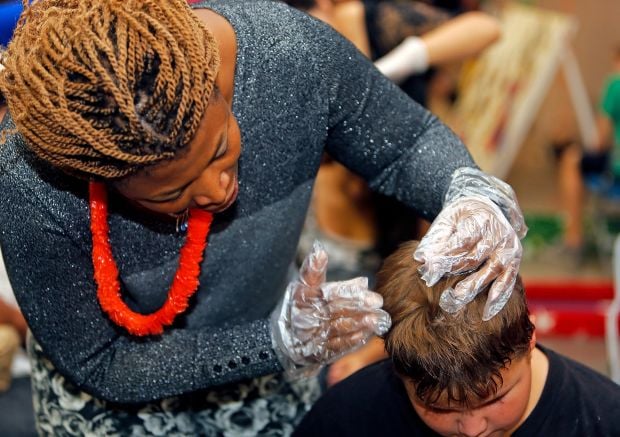 Registered nurse Bridget Ehiri performs a required lice inspection on one of the hundreds of children given free haircuts and styles by dozens of hair care volunteers during the Back 2 School Bash 2013. 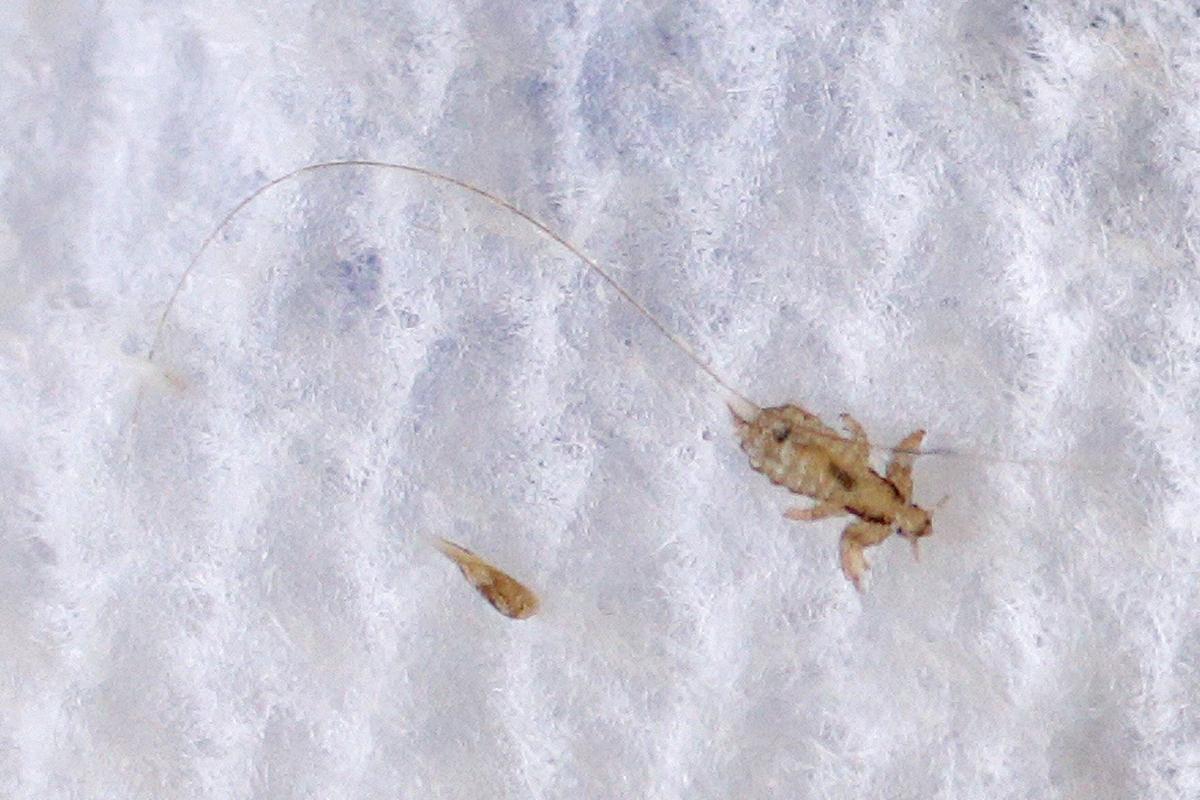 This louse, right, and a nit, or louse egg, were removed from a customer at Lice Busters in Richmond Heights, Mo. 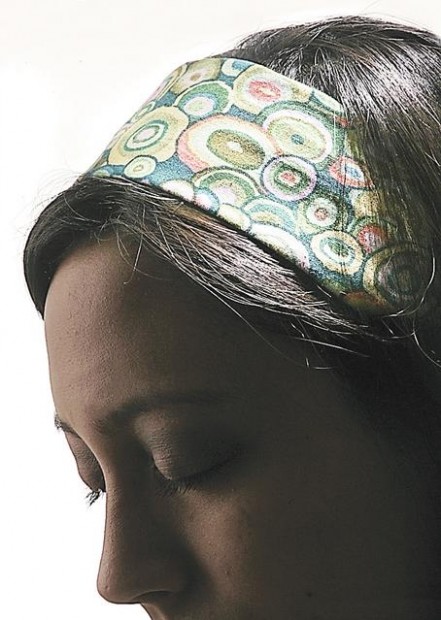 Registered nurse Bridget Ehiri performs a required lice inspection on one of the hundreds of children given free haircuts and styles by dozens of hair care volunteers during the Back 2 School Bash 2013.

Lice. Say the word out loud and your head immediately starts to itch.

And, if your child ends up getting them, they'll probably be harder to get rid of.

In the most recent data from the Journal of Entomology, 100 percent of the lice tested in 42 states — Arizona being one — are "super lice," which means they've evolved to be more resistant to the effects of pyrethroids and pyrethrins —  the active ingredients in most over the counter treatments.

Ugh. How did my kid get lice?

"One of the biggest things with lice is a lot of people think it jumps or they get it from their cat or dog, but that's not the case," said Arvie Webster, a family nurse practitioner at TMC One. "They actually have to have contact like sharing a hair comb, headband or a brush."

One of the most common ways kids pick up lice from one another are sleepovers, said Dawn Gouge, professor and specialist of Urban Entomology for the University of Arizona.

"Because they sleep in the same bed or share pillows for part of the evening or the night," Gouge said. "The nits (eggs) will not transfer, but the adult head lice, once there are a significant number on the scalp, wander onto a head that's close by...Parents tend to think oh they got them from school, but that's very rarely the case, with the exception of younger kids who may bring pillows or blankets to school and share them."

Teenagers get them from taking selfies all the time, Gouge added.

"There's been an increase in the number of teens with head lice," Gouge said. "When taking selfies, those heads are thrown together. That's another opportunity for lice to go from one head to another."

• They move by crawling. They cannot hop or fly.

• Lice is spread most commonly by close person-to-person contact. Dogs, cats and other pets do not spread human lice.

• Lice feed on the blood under your scalp several times a day. They can live on your head for about 30 days, but will die within two days if they fall off.

• They do not spread disease.

• Female lice can lay about six eggs each day.

• Contrary to popular belief, lice do not like dirty hair or dirty heads. In fact, they prefer clean hair, Gouge said.

Nits are oval-shaped and tiny, about the size of a knot in a thread. They're yellow or white and are usually firmly attached to the base of the hair shaft near the scalp. They take 8-9 days to hatch.

Nymphs look like an adult louse, only smaller. It will become an adult about 9-12 days after hatching.

Adults are about the size of a sesame seed, have six legs and are tan to grayish-white in color.

OMG how do I get rid of them?

First of all, don't panic.

"I can't emphasize this enough," Gouge said. "They're easy to take care of when using the right tools. Unfortunately there's an awful lot of over the counter products that are not the right ones to use."

To make it even more challenging, some of the prescription remedies are no longer effective, either.

"It's just unfortunate that the FDA approved these and they do not pull them even though they're not effective. They're still available," Gouge said.

But, if you know what to look for, you can find "wonderful and very effective new" products.

Gouge said to look for products that list benzyl alcohol as the active ingredient. And, if you get a prescription from your pediatrician, request one with benzyl alcohol, such as Ulesfia.

Make sure to put the products on exactly like the instructions say to put it on to maximize effectiveness, Webster said.

Also, comb the nits out of it.

Yeah, it's tedious, but if you can remove the eggs, they won't hatch and infest your child's head.

"Comb for three days in a row, even during treatment," Gouge recommends. If you do a thorough job, "very few will get on there on the second or third day."

3 things to keep in mind when treating lice

"You can kill all those head lice, but if you don't comb out all the eggs, they will hatch," Gouge said. "The reason is to kill anything out of the egg that you missed through nit combing."

2. Check and treat other family members.

Often, parents only treat the kid who is complaining but nobody else. Sometimes, other family members will get lice and not itch. Since they're not treated, it keeps spreading.

"If you do a treatment and still see moving lice, do not use the same product for the second treatment," Gouge said. "It won't be more effective the second time around. Use a different product with a different active ingredient."

Mayonnaise, conditioner, and shampoo have been said to have a smothering effect on lice and although they haven't been effective in laboratory testing, anytime you "mess with a kid's head" you can kill lice pretty easily, Gouge said.

"The lice, once they've hatched are easy to kill mechanically using heat, washing, drying and brushing," Gouge said. "The more you mess with a head, it's fantastic for killing a lot of head lice in one go."

There is some truth to the old wives tale that you can smother the lice, since it is recommended for bed sheets and such, but you'd have to keep a bag or mayo on your head for more than 55 hours, Webster said.

The eggs are a little trickier. But, that's where nit combing comes into play.

"It can be pretty horrifying to see," Gouge said."But you can get a surprising number of eggs off of the head."

How do I keep them away?

Educating your kids is the biggest way to keep lice away.

"Big thing would be trying to do education with your children, like 'don't share your comb with anybody. Don't share a ribbon or bow with anyone," Webster said. "That's the biggest preventive way to reduce lice and the spread of it."

Also, vigilance on the parent's part goes a long way. For example, if you are having a sleepover at your house, make sure your child only uses his or her pillow or blanket.

If they spend the night at somebody else's house, check their heads afterward.

The best thing to do is monitor your child, Gouge said. Especially if your child has been to sleepovers or if you've had them at your house.

It can be tricky though, because some children won't develop symptoms until their head is infested.

"If you've never had it, it can take a few weeks before a kid can start scratching," Gouge said. "So if you think about this, if your kid gets head lice, you're not gonna have obvious signs for several weeks at which point hundreds of eggs can be laid. Then all of a sudden, you have a kid with an itchy head and sleepless nights. Then you look at that little noggin and it's crawling with head lice."

After treating your kids for lice, Webster recommends gathering all bed linens, clothing and pillows and sealing them in a plastic bag. This will smother any remaining adult lice. It'll take at least 55 hours, though.

As far as hair accessories go, wash any fabric ones in hot water. You can soak plastic ones in bleach water, but Webster recommends not taking any chances and throwing them away.

Stringent rules of past called ineffective, caused too many days absent.

If you have children twirling and tumbling around the house because of the Olympics, check o…

When Erin Hughes first started writing love notes for her son, Davis Franklin, to open in preschool, she was simply following instructions fro…

Our first reaction might be to shelter our kids, but experts say that might not be the best thing to do.