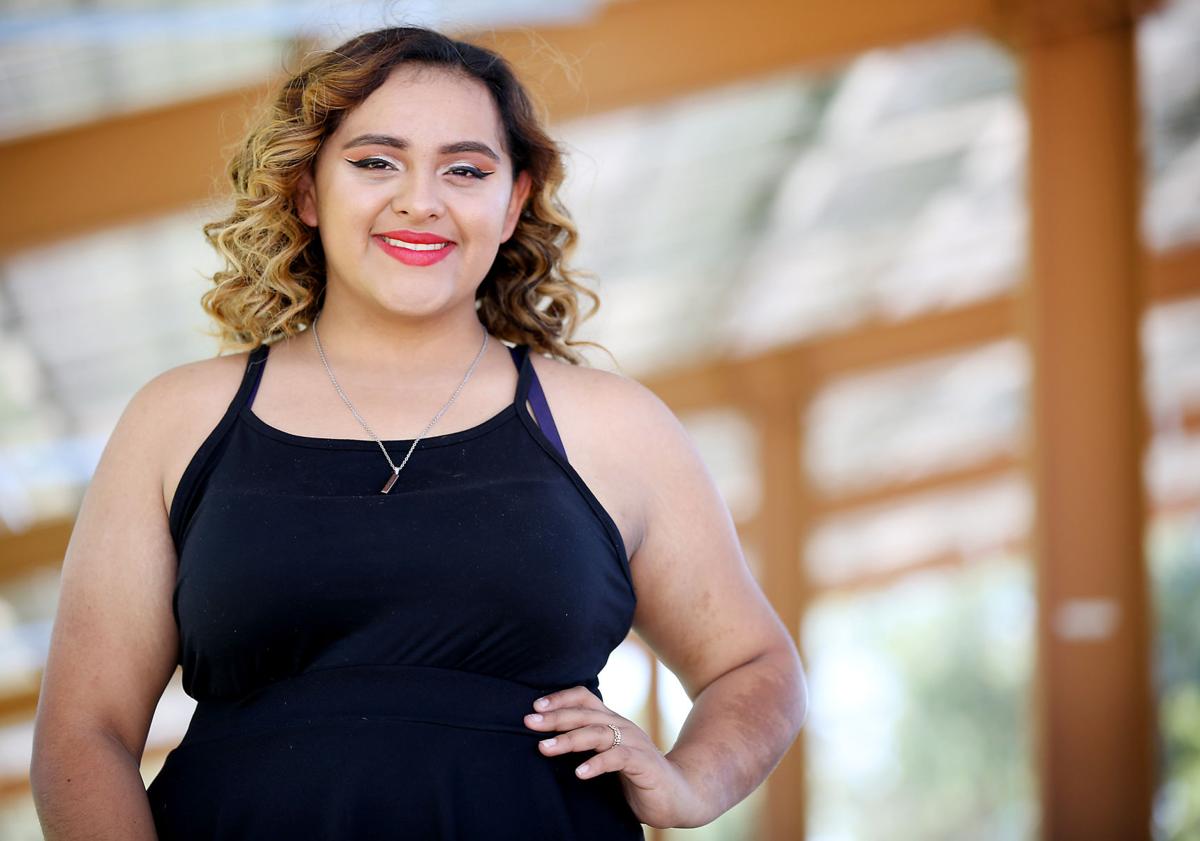 Isabel Borquez, 18, is one of the winners of the Sunnyside foundation poetry contest. 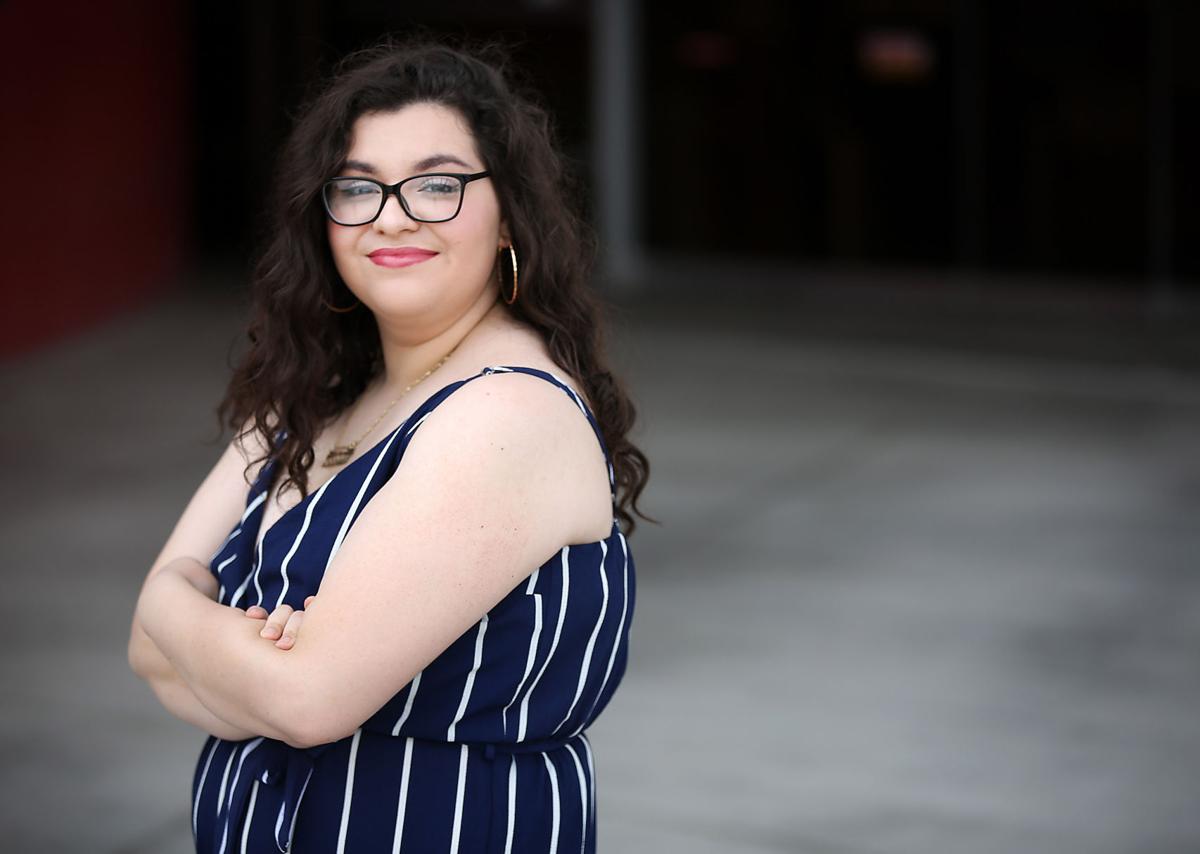 Isabella Espinoza, 18, wrote a poem called "A-la Ru-ru Nina," which is about her grandparents immigrating from Mexico and won a $100 gift card in a poetry contest sponsored by the Sunnyside Unified School District Foundation. May 14, 2020. 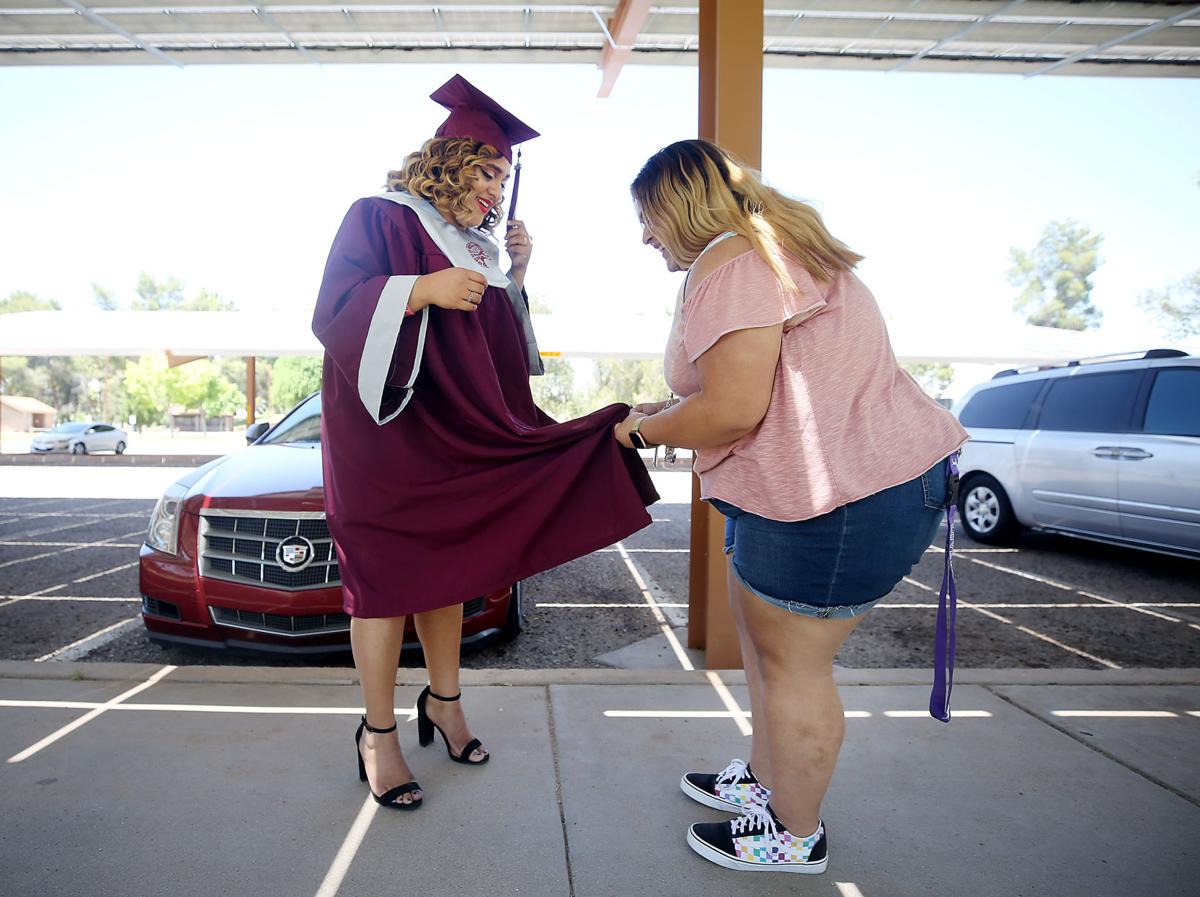 Isabel Borquez, 18, left, receives some help from her sister, Lucia, 16, before taking graduation photos at Reid Park. Borquez says her poem is about breaking expectations that may be placed on her.

With themes that included everything from family, dating, the pandemic, loss, immigration, to school and sports, reading the poems teens submitted for the first-ever Sunnyside foundation poetry contest was like a "peek into everyone's soul," says contest judge Nicole Dahl.

More than 50 Sunnyside district high school students submitted poems in both English and Spanish to be judged in the contest which came with a $100 prize and publication on #ThisIsTucson.

"It was much harder to judge than we realized because we got so many excellent submissions," say Kerri Lopez-Howell executive director of the Sunnyside Unified School District Foundation, which organized the contest.

In fact there were so many great options to choose from that the judges chose four winners instead of three as originally planned and coincidentally all of the winners happen to attend Desert View High School.

Lopez-Howell plans to showcase more of the poems throughout the summer on the foundation's Facebook and Instagram and find other ways to highlight students' work throughout the school year.

"There is so much talent in the district and I want to find a way to keep supporting artist's voices," she says.

Poet Nicole Dahl, who is also the creative director of Hotel McCoy, helped judge the contest and set up the scoring system the poems were judged on — a five-point rubric in categories that included language, how captivating the content is, spelling and punctuation, and subject and meaning.

"This was such and honor and treat and welcome reprieve during these sort of darker times," Dahl says. "Poetry is therapeutic and I think younger minds tend to be more open with feelings so the poetry is just honest and open, and all of them were written from different perspectives."

She says it opened her eyes to all the things teens are dealing with during this time.

"It made me realize we need to have extra compassion and love for teenagers right now as they're navigating a pivot into the unknown," Dahl says.

Read the winning poems and learn more about each writer below.

in a country founded on the oppressed and diverse they settled.

America wrapped her arms around morenito children and sang lullabies in their native tongue.

She made citizens out of them.

She gave them honor.

She allowed them to sneak into her values and borrow her traditions.

America watched them grow, she let them go.

They will come back to her soon, they need to remind her of her roots.

Isabella Espinoza, 18 is a senior at Desert View High School and is the class valedictorian. She started writing poetry as a sophomore and used it as a way to work out her feelings. "They weren't necessarily for anybody else to see, it was just kind of for whatever situation I was in to figure it out, almost like a third party perspective," she says. "I'd get it out of my own head to figure out what I had to do or what I was actually feeling." Her poem was inspired by her grandparents who are immigrants and was written in response to anti-immigrant rhetoric.

The theme for Espinoza's graduation speech is community. "I think what I learned this year the most was that being from Tucson and being from this community — it's a good place to come from," she says. "I'm from south side Tucson... and everyone always has these opinions about what comes from it and I think they're wrong. There's so many good people there and I really just wanted to to put that in my speech and tell people this is a good place to come from." Espinoza is the recipient of the prestigious Flinn Scholarship and she will attend the University of Arizona in the fall where she will major in biology.

"I'm not what you expect me to be" by Isabel Borquez

To whom you expect me to be

I am not a straight A student

I’m not the perfect child sometimes

I'm not the best sister

But I try to make an impact

I'm not the best employee.

But I try and accomplish what my boss expects.

You expect me to bring carts in for 15 minutes

But you don't know the pain of standing in the heat

Swallowing a pool of water

And just having to stand in the 113 degrees heat

I wish i could be the best granddaughter.

My dogs expect me to feed them everyday

I come home with blisters on my feet

My dark circles darker than the dark skies.

But my dogs still expect me to feed them.

I feel the need to please everyone.

I know people have huge expectations of me

Because im not what people expect.

Isabel Borquez, 18, is a senior at Desert View High School. She works up to six days a week at her grocery store job, mostly evenings and then stays up late to finish her online schoolwork. "It's a struggle, but anything to get me to graduate. I'm managing it pretty well," she says.

Borquez says she never really saw herself as a writer or poet until this year when she was placed into a creative writing class and wrote her first poem about her grandmother who passed away. "It seemed to really, really open to me that poetry can help you express your feelings in a way that you never thought you could and put (your feelings) into sentences that you can never pronounce clearly when you're speaking physically," she says. After graduation she's planning to either attend Pima Community College or Western New Mexico University to study psychology or criminal justice.

No star nor comet can compete with you

Always there to be our guidance,

Resilient to the desire

Fixated firmly to the axis

Immovable to the celestial pole

Continuing on with no complaints

The epitome of Polaris

Soon, I will be the light

Bright enough to keep in sight

I may be a minor,

For a future of bright lights

That will glow on north,

For the lustrous shadows

The future of what you wish

The future of what you see

You can be a stargazer

Or a daring shooting star

To be anything that personifies you.

Jing Yi Lei, 17, is a junior at Desert View High School. She enjoys writing short stories and prefers mystery, fantasy and fiction genres. This year, Lei has spent a lot of time learning about poetry and analyzing poems in her creative writing class and says she appreciates how free and expressive poetry can be. Her poem was written as part of a class assignment about generations. "It talks about family in a way, since there's three stanzas, it goes from my grandmother to my mom and then to me and it talks about how the times have changed."

Alexandra Nava, 16, is a sophomore at Desert View High School and says she uses writing and poetry as a way to express her feelings. "I have a strong interest in writing because it's a way I can communicate my feelings to others without being judged," she says. "I am a person that doesn’t like to talk about how I feel but writing helps me get all of my feelings out in a creative way." She says her poem is about "all the abusive relationships in this society. How can someone play with your mind using things they can afford to make you feel loved, but at the moment you make something they dislike they throw you away like nothing."

Teen poets in the Sunnyside Unified School District could have their work published on #ThisIsTucson and win a $100 prize in the SUSD foundation's first ever poetry competition.

May we announce #ThisIsTucson's 2020 Summer Reading Challenge for Grown-Ups 😍

Each of the 18 books on this list have some kind of Arizona connection. Many of these titles are written by local Tucson authors or are set in Tucson or Arizona. Some explore topics relevant to our region.

April is National Poetry Month, so the Pima County Public Library is hosting a haiku-writing challenge to connect everyone during social distancing and the coronavirus pandemic.

Behind the masks: Tucsonans share how they've been impacted by the pandemic

The Arizona Daily Star's Mamta Popat photographed and spoke with 10 Tucsonans and learned how they are being impacted by the coronavirus pandemic.

A running list of resources for Tucson-area families impacted by COVID-19 closures: online learning tools, tips for talking to your kids about the virus, audiobooks and more!

Editors note: This story was last updated on May 11.

During a meeting over video chat Tuesday, May 12, the Tucson Unified governing board unanimously approved the Family Life Curriculum for TUSD students, which includes sex education.

You can continue to practice safe physical distancing during the coronavirus pandemic with these drive-ins, drive-thrus and at-home things to do in Tucson, Arizona, May 20-24.

Adam Lazarus posts poems on his Facebook Page, Poems for Pandemics, every day with topics that range from experiences during the pandemic, to life in general and absurd musings on things like snoring, manatees and the desert heat

For the month of May, Tucson artist Racheal Rios has been creating face masks out of objects found around her house or collected from the Sonoran Desert. She's used cacti fibers, bike parts and wildflowers for some of the creations.

Tatum Rochin, the artist behind The Tucson Type, is our featured guest for our second #ThisIsTucson Member Meetup and she'll share some drawing tips and basics for creating your own custom-icon illustrated maps.