A carpenter bee heads for a side bloom on a saguaro in the Red Hills outside Colossal Cave Mountain Park, Tucson, Ariz., May 20, 2021. 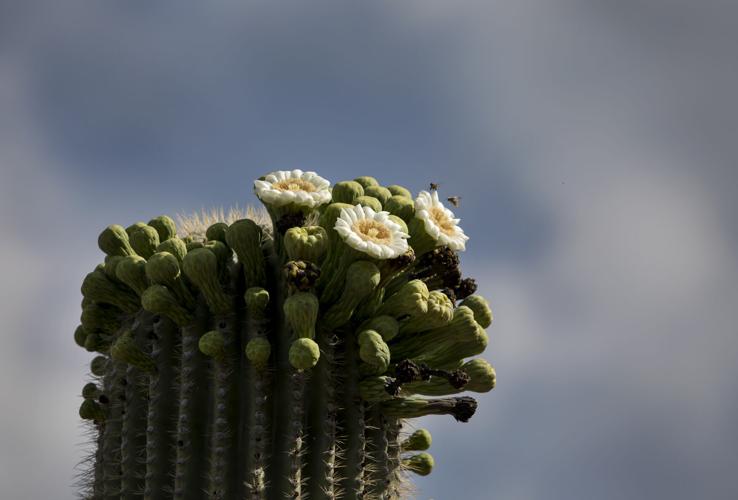 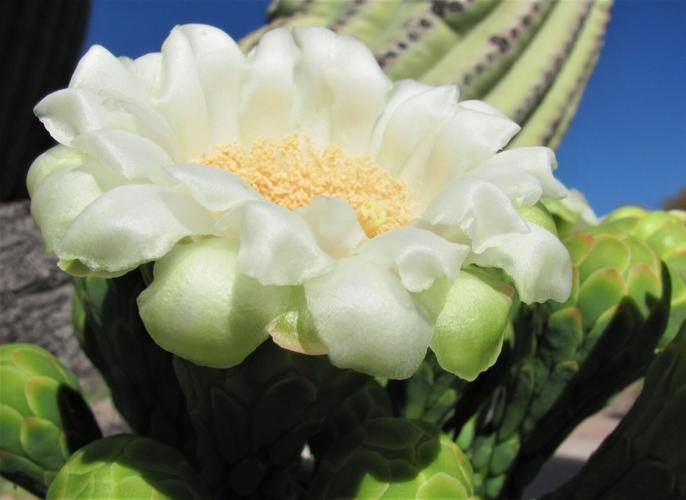 The saguaro blooming season is now through June.

The stunning saguaro blooms, featuring soft white petals and a pastel yellow center, can now be found sitting atop saguaros around Tucson.

Saguaro blooms’ peak blooming season starts around this time and goes through June, according to Grace Stoner, a horticulturist at the Arizona-Sonora Desert Museum.

Since cacti store water extremely well, the saguaros don’t rely on rainfall as much as other local plants do for a successful blooming season.

“Water shouldn't really affect their blooming, but it is limited by freezes. So if the previous winter has been particularly intense and there have been multiple freeze events, you might have fewer sort of blooms the following summer,” Stoner says. “But other than that, it's like any other plant just (relying on) daylight hours and temperature.”

That means we should have an “average” blooming season this year, according to Stoner.

Although saguaros can produce many blooms, the individual flowers have a super short lifespan of one day.

“They'll have a series of blooms on them for months. It's just each flower itself will open for a period of one day,” Stoner says.

The flowers will typically bloom at dusk or later and exist until the following day when they wither away. During a saguaro's bloom, the flower could be pollinated by many Sonoran Desert creatures including bats, doves and bees.

“Once a saguaro flower has been pollinated, it matures into fruit that splits open when ripened — revealing bright red pulp,” #ThisIsTucson wrote in 2020. “Each piece of fruit contains about 2,000 small black seeds, according to the Arizona-Sonora Desert Museum.”

This year, you can find saguaro blooms at places like Gates Pass, where Stoner says they have been blooming for the last few weeks, and other places like Saguaro National Park East and the Douglas Spring Trail. We've also spotted saguaro blossoms in local neighborhoods.

“Get out and enjoy them,” Stoner says. “Because (sometimes) you just forget to look for them because it's so hot and you're like, ‘I don't want to go outside,’ you know, but it's such a treat to be able to see in this time of the year, so just enjoy them.”

For more information about saguaro blooms, check out the Arizona-Sonora Desert Museum’s website.

A guide on how to stay sun-safe and protect your skin from harmful UV radiation with expert advice from the senior health educator at the University of Arizona Cancer Center's Skin Cancer Institute in Tucson.

Cactus blooms in Tucson are showing off this spring, preparing us for the beautiful saguaro blossoms that typically start blooming in mid-May. Here are some of the cactus blooms we've seen this year!

Your guide to Sabino Canyon Recreation Area: We'll tell you about shuttles through the canyon, if pets are allowed, where to see water after rain falls in Tucson, and more.

The Bookworm Path at Mission Garden in Tucson provides a hands-on outdoor learning experience for local children. The path features 20 mailboxes filled with books and activities for kids in grades K-12 to learn about the Sonoran Desert region.

Thank you for supporting #ThisIsTucson! Because it's important to us to continue providing coverage that you enjoy and find helpful, we'd love your feedback in our 2022 reader survey.

Tucsonan Gary Dykman built a 190-foot-long roller coaster in his yard for his three grandchildren to enjoy when they visit. He built the coaster five years ago, but recently went viral with a post on Facebook.

Here are a few things you might want to know about saguaro cactus blooms in Tucson and Southern Arizona. Some spoilers: Peak blooming is now through early June and the flowers smell like melon.

Decorate your reusable water bottle this summer with Tucson stickers made by local artists and illustrators.

The Tucson maker community continues to expand with a new '70s botanical-inspired artist and creator shop in downtown Tucson. Arizona Poppy held its grand opening on Saturday, May 21.

Elvia is a journalism and history graduate from the University of Arizona. She hopes to create stories that show what makes Tucson and its community special. 🌵