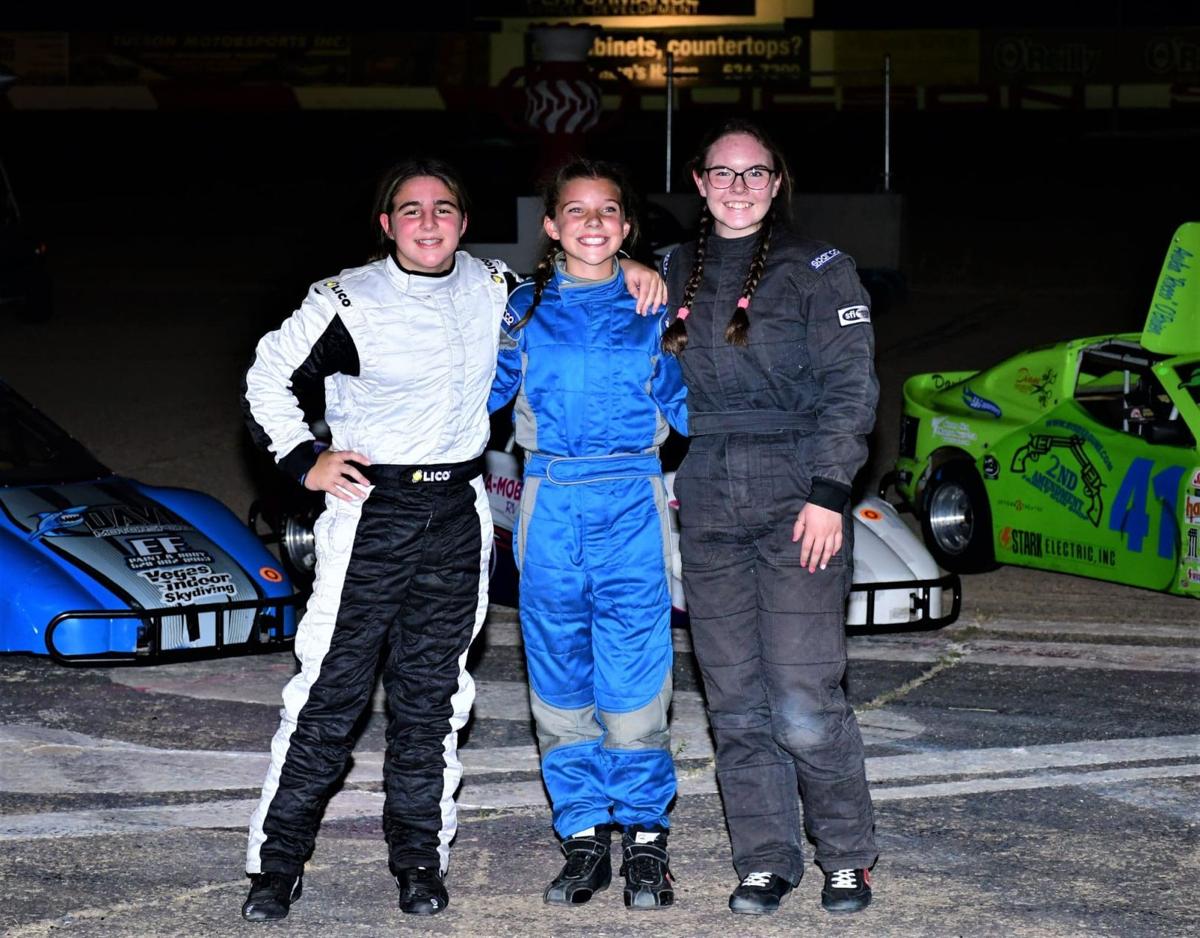 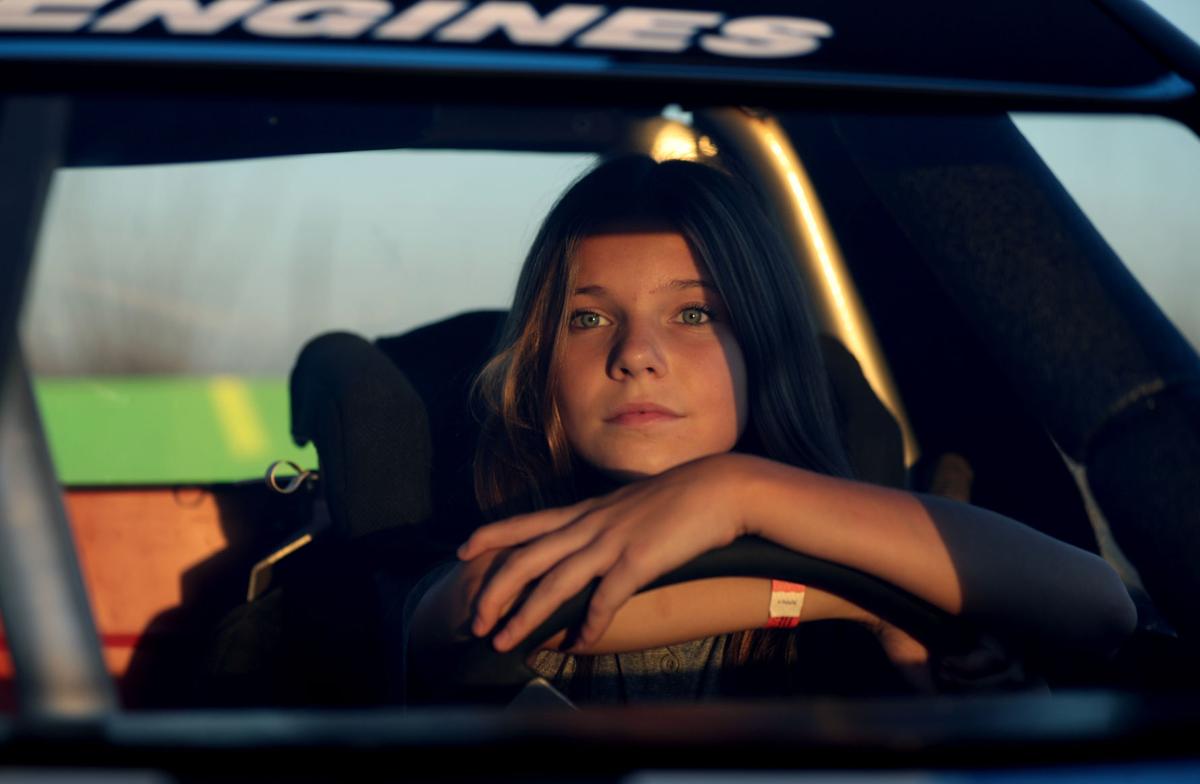 Keirstin Jones took second in the Outlaw Bandolero division. Her parents, Dustin and Kelly, competed at Tucson Speedway as teenagers and later married. 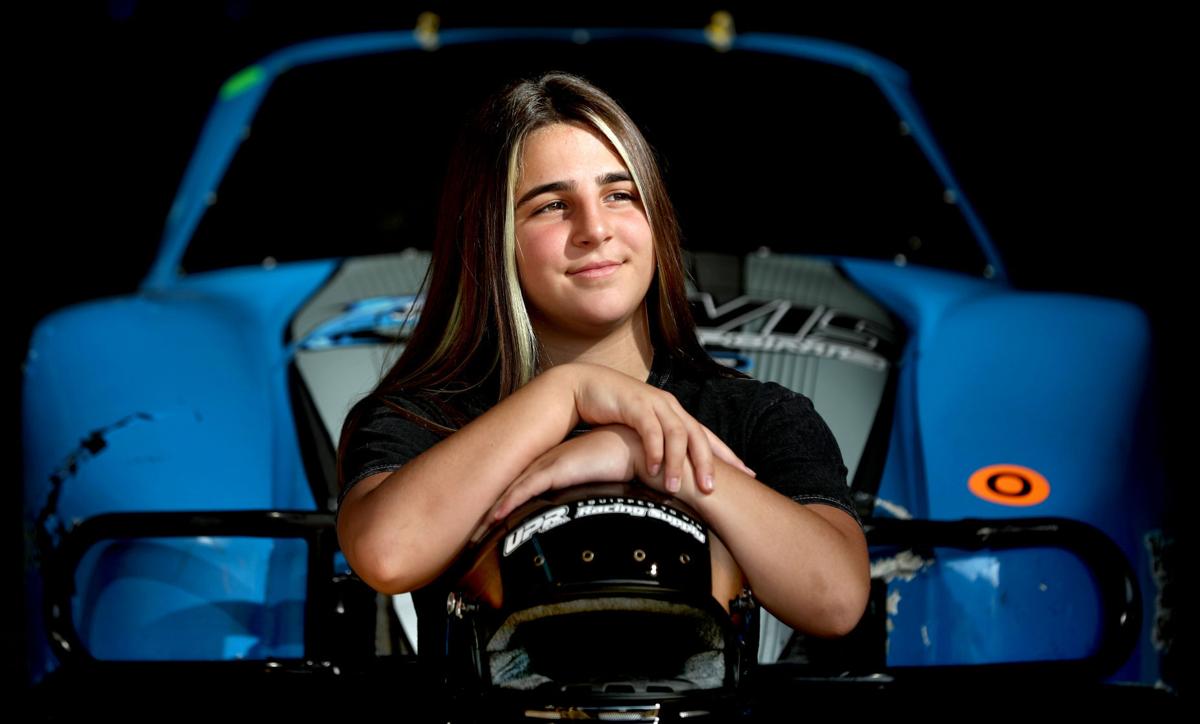 Quinn Davis took third in the drivers standings in Tucson Speedway’s Outlaw Bandolero division this year. She was one of three girls to take the top three spots in the division. 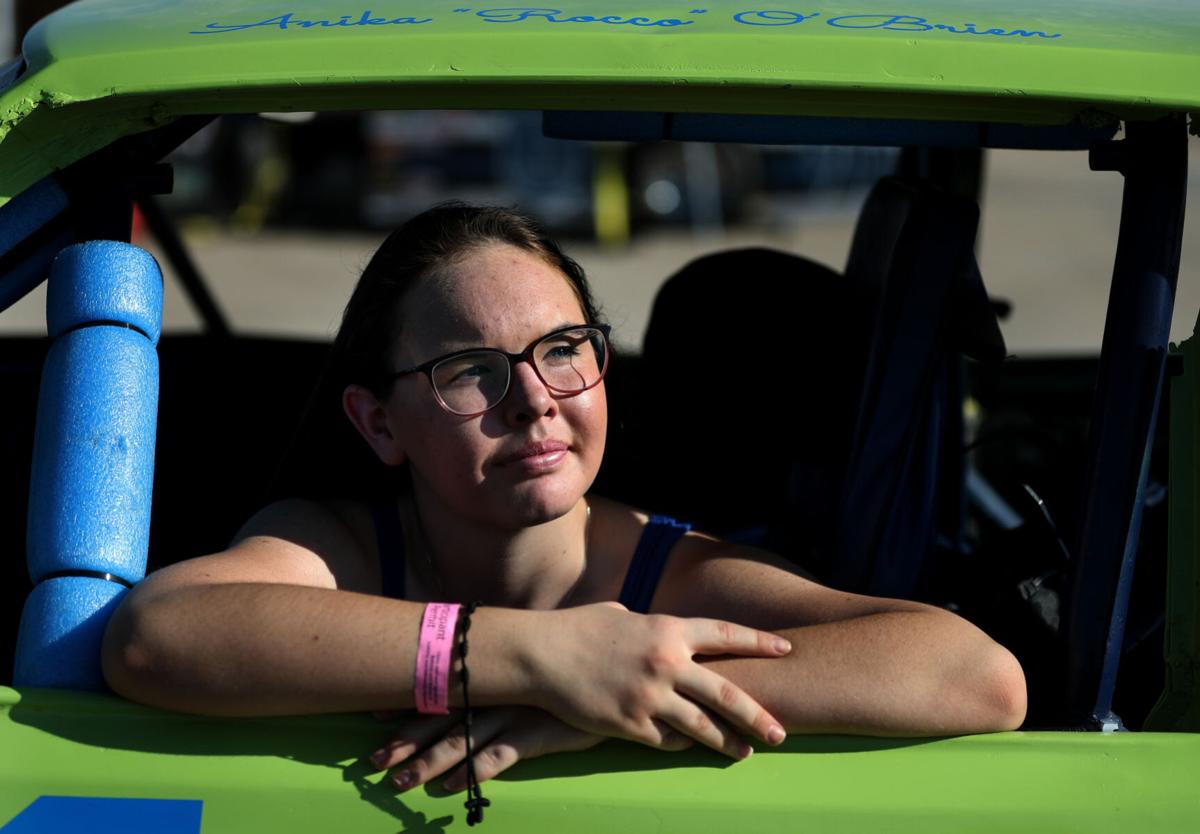 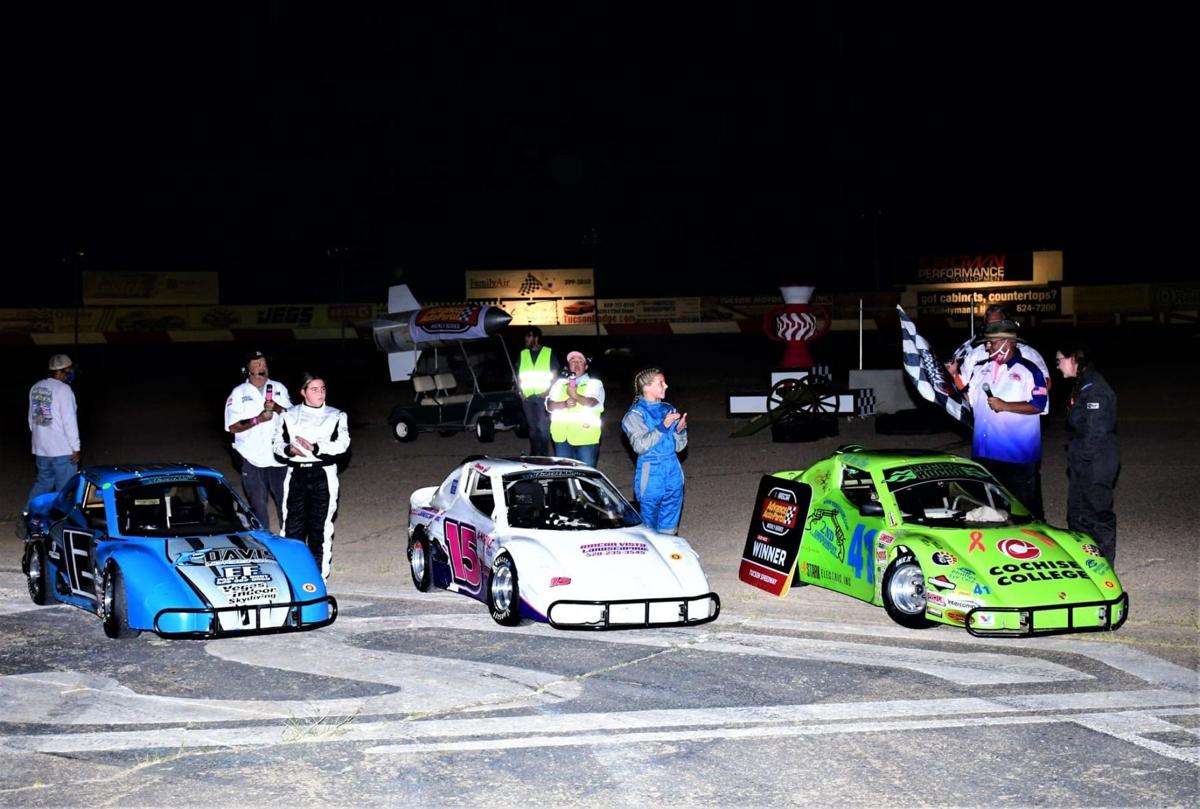 Quinn Davis, Keirstin Jones and Anika O’Brien stand next to their cars following the final race in Tucson Speedway’s Outlaw Bandolero season. The girls said their friendships with one another helped them to their successful seasons.

Keirstin Jones took second in the Outlaw Bandolero division. Her parents, Dustin and Kelly, competed at Tucson Speedway as teenagers and later married.

Quinn Davis took third in the drivers standings in Tucson Speedway’s Outlaw Bandolero division this year. She was one of three girls to take the top three spots in the division.

Quinn Davis, Keirstin Jones and Anika O’Brien stand next to their cars following the final race in Tucson Speedway’s Outlaw Bandolero season. The girls said their friendships with one another helped them to their successful seasons.

The first time she raced on the track, Quinn Davis was 5 years old.

Quinn climbed into a club car and drove 10 laps around the Tucson Quarter Midget Association’s Marana track. Then she couldn’t stop.

Really. Quinn didn’t know how to stop the car.

Quinn’s driving quickly improved and she went on from driving a club car — a four-cylinder vehicle weighing a few hundred pounds and traveling upwards of 45 mph around a 1/20-mile track — to win four championships in the association before moving up to Bandolero racing on Tucson Speedway’s 3/8-mile track. She’s had success with the larger Outlaw Bandolero vehicles as well. Earlier this month, Quinn took third in points in this year’s Outlaw season, for drivers who are 11 years old and older.

The Outlaw cars are small but mighty, capable of reaching speeds up to 70 mph .

The sport has obvious dangers. But these girls are taking risks in order to achieve their goals, and they’re tearing it up on the track while slashing stereotypes in what’s historically been a male-dominated sport.

They’re also forging friendships, supporting each other and providing a solid example of good sportsmanship to drivers of all ages.

All three girls had their struggles during the track’s shortened 2020 season, including crashes and breakdowns, but they stayed focused and stuck together as they drove their way to success.

Anika says nothing compares to racing.

“The adrenaline is what makes it fun,” Anika said. “Every time you go on the track, you don’t know what could happen. You have a split-second to decide what to do in a situation.”

The 14-year-old has been driving for five years, but is still two years away from earning her driver’s license, something she calls “not fair.”

Like Keirstin and Quinn, Anika was born into racing. Her dad, Brian O’Brien, began racing stock cars when he was 21 years old. He was Tucson Speedway’s 2016 and 2017 Pro Stock Champion. He also finished second in points in 2018 and again in 2020.

“Eventually, I want to move up and race against him,” Anika O’Brien said.

Anika began her racing career five years ago in the racetrack’s Bandit division, which is for drivers ages 8 through 11. She’s been a rising star from the start. In her three seasons in the division, she took one Rookie of the Year and two championships before moving up to the Outlaw division.

“Last year, when I moved up to Outlaw, I got Rookie of the Year,” Anika said. “This year, I was hoping for another championship title. That was my goal.”

She has finished in the top five in all four races she’s competed in this year. On Oct. 3, she finished first.

“I knew my car had it and I had it” that day, Anika said.

Next year, Anika will compete in the speedway’s Hobby Stock Division, driving an early 1980s Monte Carlo that she and her dad built earlier this year.

“I raced it once this year, but at a practice the weekend after the first race I crashed into the wall and wrecked it,” Anika said.

The car survived, and Anika’s father drove it to a second-place finish in the Hobby Stock season’s final race last weekend. Anika and her mother, Kristi, proudly watched.

Anika wants to keep racing for as long as she can. She wants to be a police officer someday, saying she isn’t particularly interested in racing professionally.

“I wouldn’t be interested in going big-time, because it’s not the same, but I do want to continue with short track racing,” Anika said. “My favorite part is the fun of it. Going out there every weekend, you meet a whole bunch of great people.”

“This was a special season”

One of those “great people” is 13-year-old Keirstin Jones, whose racing bloodlines run deep.

Keirstin Jones was 8 years old when she got her start in go-karts, She moved up to Bandolero racing three years ago. Last year, during her first season in Outlaws, Keirstin came in third in points.

“My favorite thing is just having fun and winning,” said Keirstin, who has been racing alongside — and against — Anika for the past three years. “This was a special season, because it was all three girls.”

When she’s not busy working on her car and practicing at the track, Keirstin also plays volleyball at Old Vail Middle School.

After the shortened season, Keirstin is eager to get back on the track next year for a full — and possibly final — season in the Outlaw division. Racing resumed in August following the coronavirus pandemic closures, but with only a few months left in the season, there was only time for three more races.

Keirstin can move up from Outlaw racing when she turns 14, but will likely compete in the full season before “probably” moving up to Thunder Trucks, the same division in which her mom just made her racing return.

Keirstin’s second-place finish was a highlight of her racing career. As far as a career in racing goes, that’s yet to be decided.

“It kind of depends on how everything goes,” Keirstin said.

What’s not up in the air is her love for racing and all that comes with it.

It’s a very competitive sport, but it’s also a nice (way to form) friendships,” Keirstin said. “I’ve made so many friends at the racetrack.”

“It’s not about trophies for me”

While Anika and Keirstin spent last weekend at Tucson Speedway, Quinn was at the Las Vegas Motor Speedway Bullring and Dirt Track, competing in the Bandoleros at INEX Asphalt Nationals.

Quinn loved racing quarter midgets, but at 10, she and her parents realized she was outgrowing the car. She decided she wanted to move over to Bandoleros, and had an impressive first season. Quinn finished fifth in points after only racing half the season, and was named Rookie of the Year.

“I like to have fun,” Quinn said. “It’s not about the trophies for me. It’s about having fun.”

Like her friends, Quinn was born into racing. Her father, Mark, raced off-road vehicles and motorcycles, and at one point worked as a NASCAR official.

“It’s really surprising that some people say that girls aren’t capable of stuff,” Quinn said. “I do this to make girls have a positive energy and give them inspiration to do this and try other sports as well that boys like to do. We’re not allowed to do baseball, but we can do softball.”

Quinn said the sport allows her to let out her emotions on the track. “They’re really strong at this point because of COVID and not being able to see anyone. You can get them all out on the track,” Quinn said. She added that when “aggressive driving happens on the track, it’s just like, ‘Oh we’re racing now.’”

Quinn is planning to return for another season at Tucson Speedway, and will continue racing in Las Vegas, despite some bad luck at the track, including wrecking her car on the first lap last weekend.

When she’s not helping her dad out with her car, Quinn loves going to cafes and getting her nails done with her mom. She can do both, she says, thanks to the support she receives at home and at the track.

The girl who couldn’t stop her car in her first trip around the track now can’t stop racing.

“I suggest (kids try) racing because everyone is accepting of people and they don’t judge.” Quinn said. “Your friends are supportive no matter what.”

Quinn says she would love to race professionally someday. She rattles off a list of NASCAR drivers, including Brad Keselowski, Noah Gragson and Hailie Deegan, saying, “I want to be like them, but different.

Quinn was 4 years old the first time her dad took her to a race at Tucson Speedway.

On that day, kids were invited onto the track to meet Keselowski and touch his race car, she said.

A University of Arizona graduate took the photographs that artist Shepard Fairey used as inspiration for an illustration now on the cover of TIME magazine. Victoria Varnish lives in Los Angeles but grew up in Tucson.

While festivities may look eerily different this year with the Pima County Health Department recommending that the community avoid door-to-door trick-or-treating, Halloween parties, haunted houses and festivals all events that can put you in close proxmity with others, Tucsonans are getting real creative to make sure kids and families can still enjoy some Halloween magic.

The Children's Museum Tucson is reopening with new outdoor activities

Limited access will be available to a few indoor exhibits as the Children's Museum Tucson plans to reopen with mostly outdoor activities following a seven-month closure due to the COVID-19 pandemic.

Tucson author Jillian Cantor's new novel "The Code for Love and Heartbreak" is a YA Jane Austen retelling of "Emma." In this modern adaptation, Emma is a math nerd who creates a matchmaking app.

Las Azaleas focuses on the work of of historic and contemporary female Latin artists and composers, some of whom may not have received the same level of exposure as their male counterparts.

The work of this collection of Tucson, Arizona based Latinx makers is particularly unique because it's largely inspired by their love and pride for their culture, language and life in the Sonoran Desert.

Take a break from doomscrolling with these peaceful Tucson videos

If it's hard to step away from your screen today because work, school, other committments we put together a few videos that we we hope will bring you a few minutes of peace and few laughs.