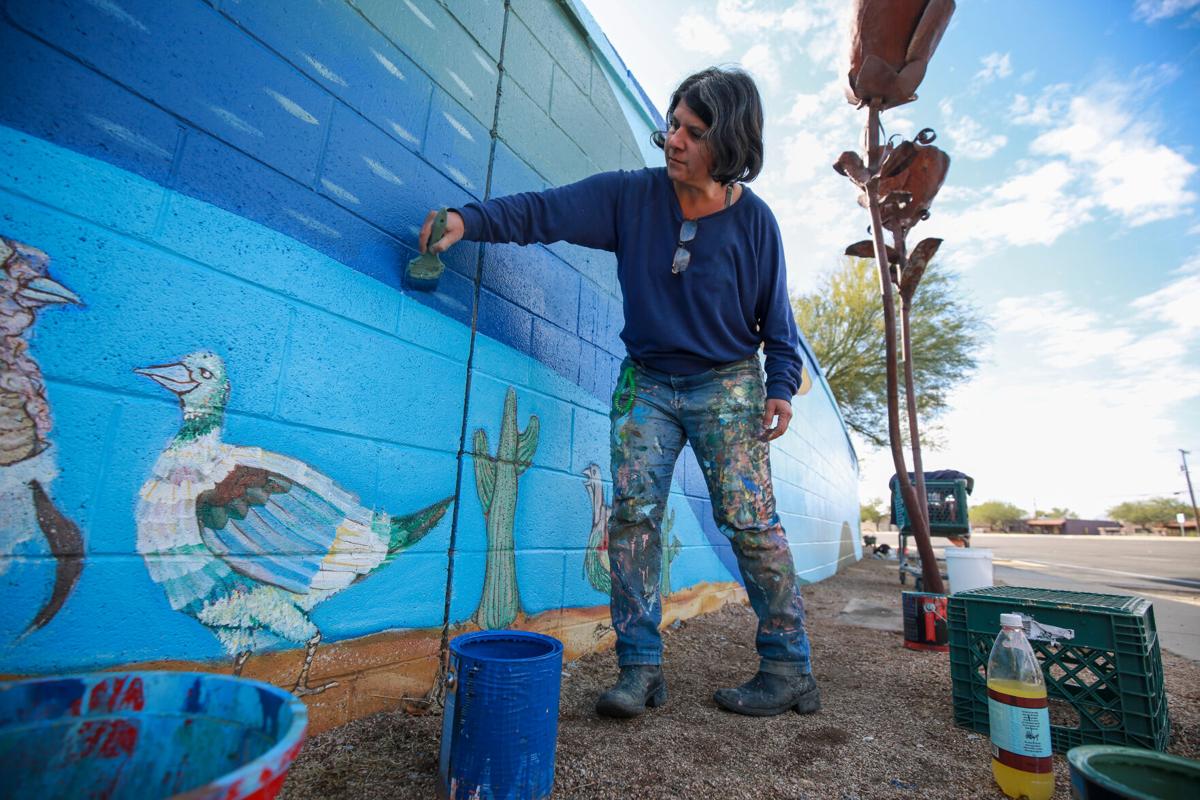 Pasqualina Azzarello, original artist of the Stone Avenue mural, restoring it on Dec. 17, 2021 with brighter and better paint. The mural on Stone Avenue between Roger Road and Limberlost Drive started was restored by the original artists 20 years after its creation. 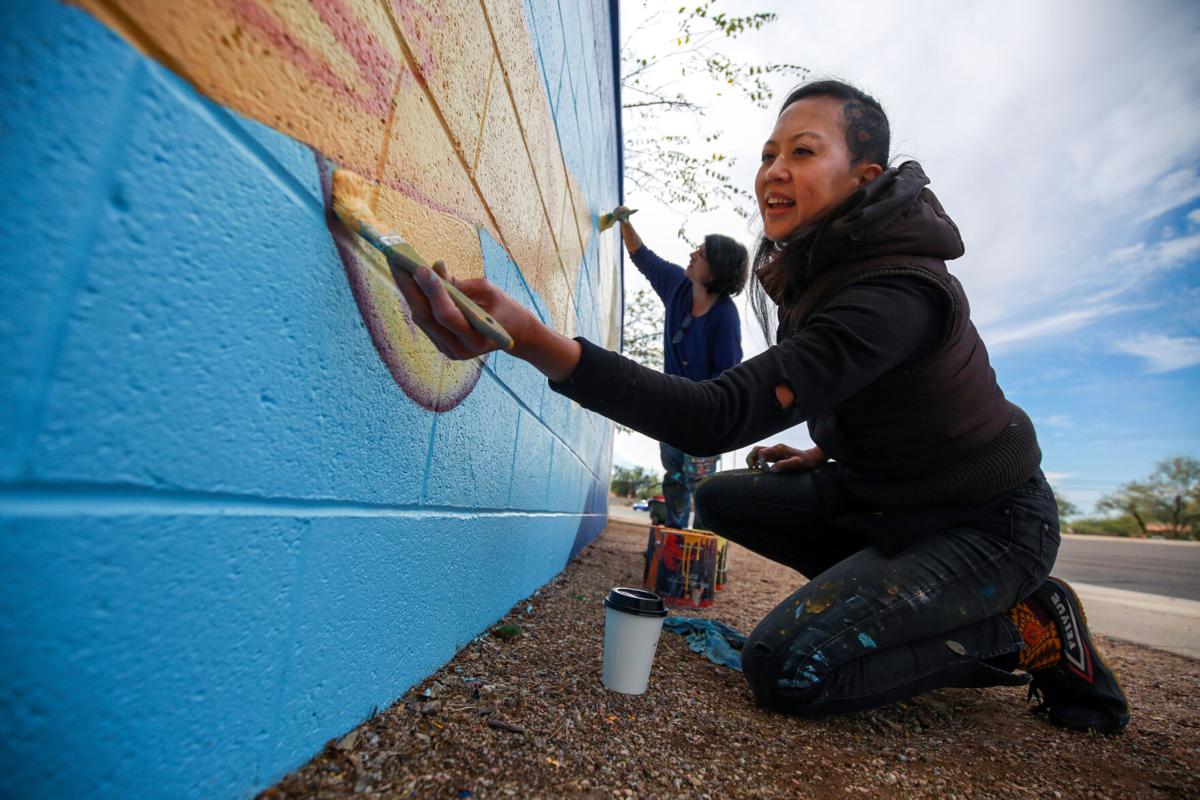 Serena Tang and Pasqualina Azzarello repainting the fish on the Stone Avenue Mural on Dec. 17, 2021. 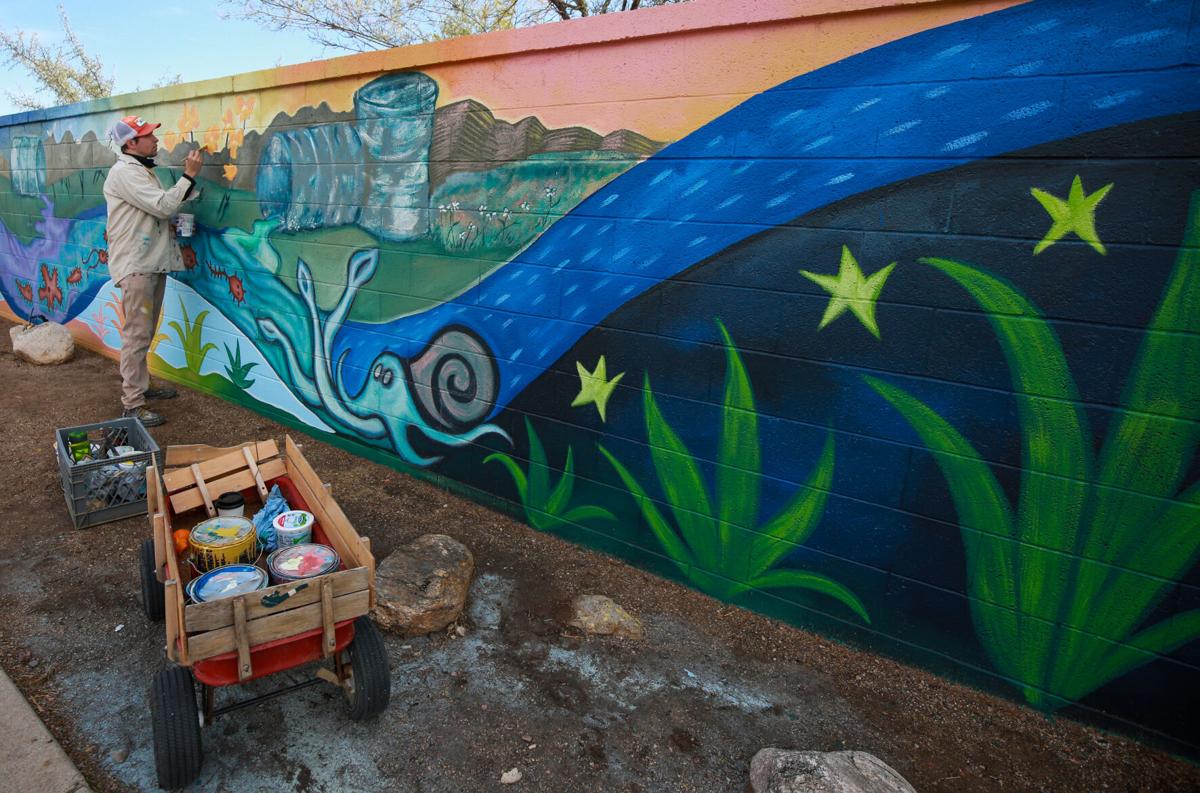 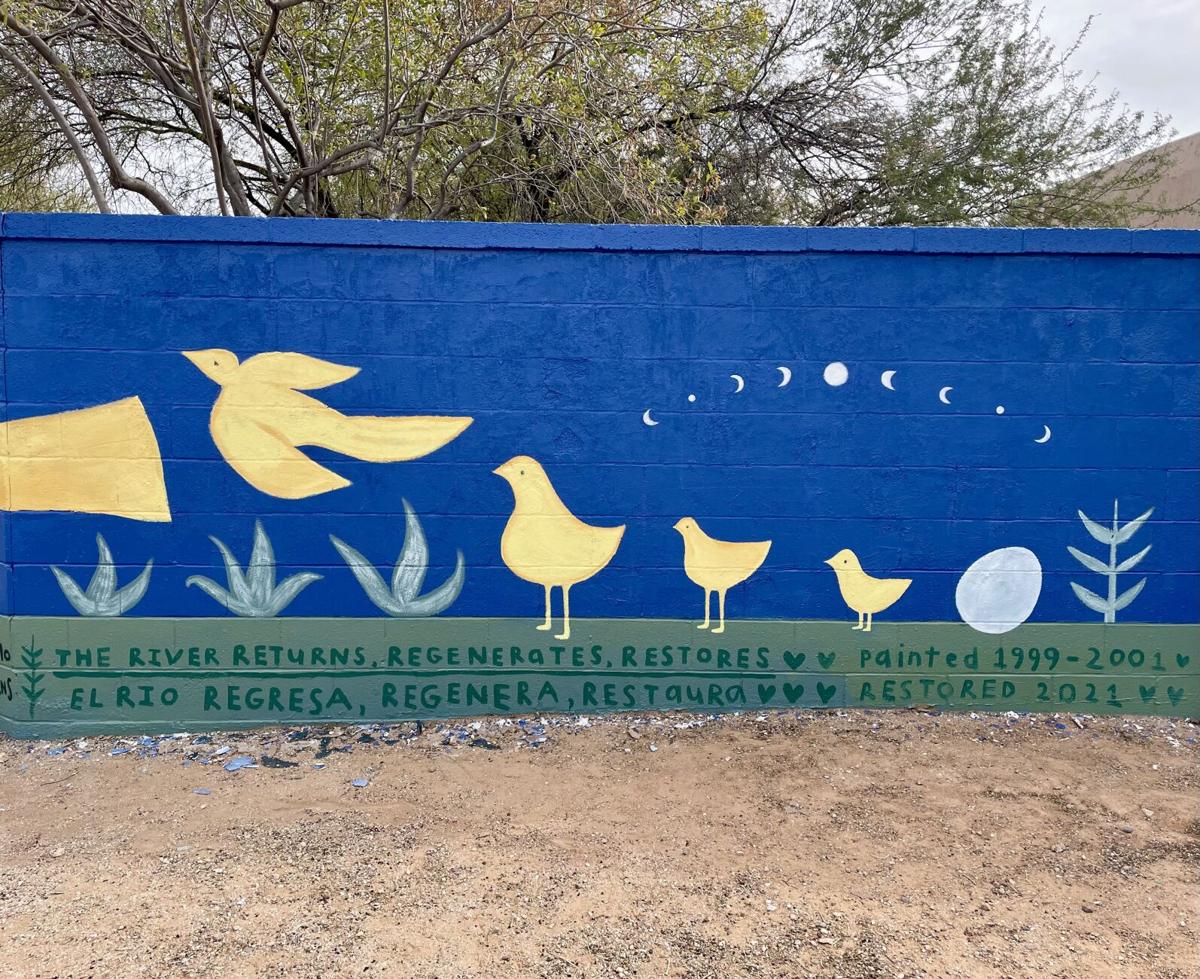 The newly painted restoration credit on the Stone Avenue mural located on Stone Avenue between Roger Road and Limberlost Drive on Dec. 21, 2021. 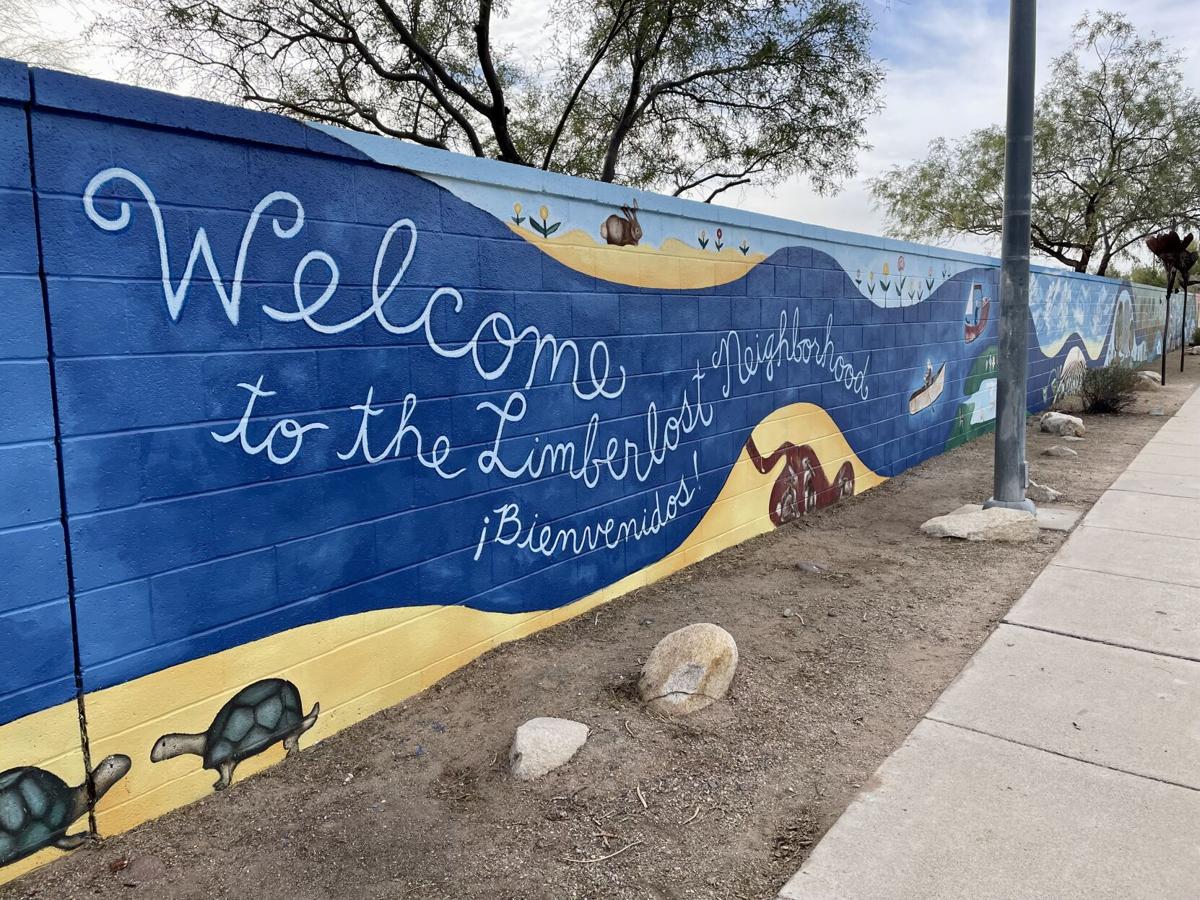 Part of the newly restored Stone Avenue mural located on Stone Avenue between Roger Road and Limberlost Drive on Dec. 21, 2021. The 20-year-old mural was restored by the original artists, including Pasqualina Azzarello.

It's where she created her third mural ever, more than 20 years ago. The Stone Avenue mural, located on a 630-foot-long wall that curves around Stone Avenue between Roger Road and Limberlost Drive, was one of the murals that helped shape Azzarello's career as an artist.

"This wall was very formative for me and really steered everything that happened next, both professionally and creatively," she said.

Now, 20 years after its unveiling, Azzarello returned to Tucson at the beginning of December from her home in Easthampton, Mass., to lead a restoration project with the Stone Avenue mural's other original local artists. The project will preserve the integrity of the mural while revamping the areas that need a little sprucing up. Azzarello referred to the project as the "next iteration" of the mural.

"We are leaving about 85% of the original imagery intact, but we are painting 100% of the wall surface," she said. "We are making a lot of efforts to further unify the wall as a whole object and as a whole concept. So we're doing a lot to make it overall a more visually energetic mural, a more cohesive piece while still honoring and respecting and preserving the original iconography."

An addition to the Limberlost neighborhood

The artists, including Azzarello, were determined to hear out the neighbors' concerns by going door-to-door in the neighborhood and inviting residents to attend monthly meetings where both groups could stay on the same page throughout the project.

"We said, 'Well, what's important to you? What are your memories? What would you like to see on this wall?' And that created a whole new dynamic with the neighborhood," Azzarello said. "They started telling animated stories about the watermelon patches, the regional river that used to flow, the cattle farms, you know, the neighborhood swimming pool. So we just started taking all these notes and we just learned a lot."

Azzarello said she understood the initial apprehension to the piece and wanted to make sure that she and the other artists created something that represented the residents and the rich cultural history of the neighborhood.

With the help of local artists — which included BICAS founder and sculptor Kim Young and 10 Amphitheater High School students, including then-14-year-old student Adam Cooper-Terán — the Stone Avenue mural came to fruition with colorful images of wildlife, plants and places reminiscent of Tucson life.

The mural was completed in 2001, nearly 2½ years after the project began.

Community engagement and youth leadership development were essential in the initial creation of the project, which are elements that have carried into the current restoration project.

As a part of the restoration project, participating artist Paloma Jacqueline has worked closely with a group of Nash Elementary School kindergarteners to help create ceramic tiles to install on the mural.

"It's really important to recognize that young people are so valuable because of the perspectives they bring," Azzarello said. "Young people are our future and they're also our present. And when we engage young people, in what we're doing, it really serves to strengthen projects and initiatives and communities as a whole."

The journey to restore the mural

Azzarello herself was inspired by muralists when she was a little girl growing up in Los Angeles during the 1980s when over 200 murals were commissioned by the city ahead of the 1984 Summer Olympics. She recognizes the impact that public art installations can have on youth and adults alike.

The creation of the Stone Avenue mural was the first time Azzarello had worked with youth on a mural project. Since then, she has worked with over 12,000 youth from the ages of 14 to 24 on various art projects across the country.

So, when the opportunity presented itself in 2019 to restore the mural she helped create 20 years ago, Azzarello was instantly on board. She came to Tucson and met with Goodspeed to make a proposal and create a budget for the project.

But then COVID-19 struck.

"The pandemic came and we all chatted and we all just thought understandably it's indefinitely postponed," Azzarello said.

Little did Azzarello know that Goodspeed was working on raising the funds throughout the last two years to make the restoration project happen. With grants and fundraising, along with help from the Tucson Department of Transportation and the Arts Foundation for Tucson and Southern Arizona, the project was finally possible this year, according to Goodspeed.

This past spring, Azzarello received a call from Goodspeed stating that the neighborhood association had raised the necessary funds to do the project.

Azzarello returned to the Old Pueblo at the beginning of December to work on the two-week restorative project with the other original artists, including Cooper-Terán, who is now an artist, performer and multimedia designer.

The major mural restoration work wrapped up on Friday, Dec. 17, with a celebration held on Saturday, Dec. 18. But if you pass by the curve on Stone Avenue any time soon, you may find some of the artists putting finishing touches on the project.

"Learning just how much this mural means to this community, you know, both as individuals and collectively, is really humbling and very touching to hear and I think that the time and space and resources that we invested in the immediate community early on is a real testament to that continued sense of ownership that really has grown in the years since," Azzarello said.

"And Tucson has so many more murals now and many of those were created since this wall was made. So, it's a real honor to have this project be included in such an impressive collection of public art that exists here in the city of Tucson."

Tucson is home to many places for photo opportunities. If you're looking for a saguaro backdrop, lush greenery or a splash of color thanks to Tucson's many murals, here are our favorite photo-worthy spots.

Things to do this weekend Dec. 22-26 in Tucson, Arizona include holiday events such as lights displays, shopping, live music and more.

Ring in 2022 with these local celebrations and late-night New Year's Eve parties in the Tucson, Arizona area.

Find events in January 2022 (and for New Year's Eve 2021) in the Tucson area that include local markets, trivia nights, a circus, a jazz festival and the annual Tucson Gem, Mineral & Fossil Showcase.

The Art Alley Gallery, located in the Miles Neighborhood near Broadway Boulevard and Kino Parkway in Tucson, Arizona is home to over 100 pieces of artwork. The gallery is ever-changing and features framed paintings and drawings from school children.

Some of Tucson's best art exhibitions of the year have already started. Find murals at public parks, little green army men at the Mini Time Machine Museum of Miniatures, a food exhibit at the University of Arizona Museum of Art, and more.

LA artist's social commentary exhibit, 'Look What You Created,' on display in Tucson

In his first solo exhibition in the Southwest, Los Angeles-based artist Patrick Martinez draws inspiration from personal experiences, the COVID-19 pandemic and political polarization in “Look What You Created,” on display at the Tucson Museum of Art.