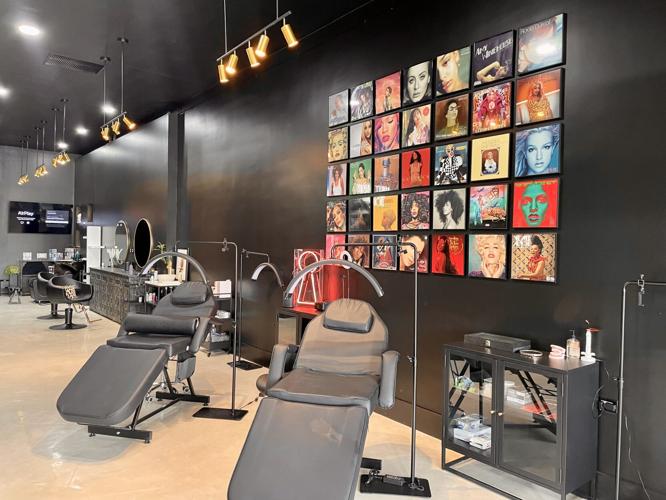 The inside of The Neon Door beauty and tattoo studio in Tucson. 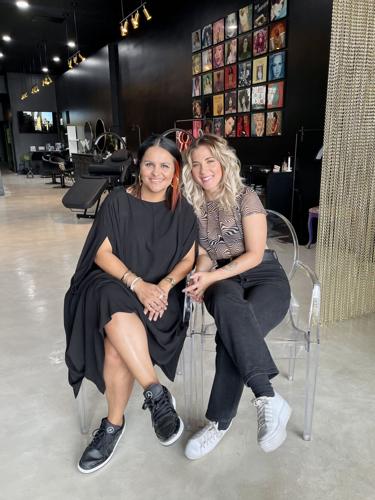 Nejla Al-Rashid, left, and Sophia Marin, right, pose for a photo at the new The Neon Door location on June 17. 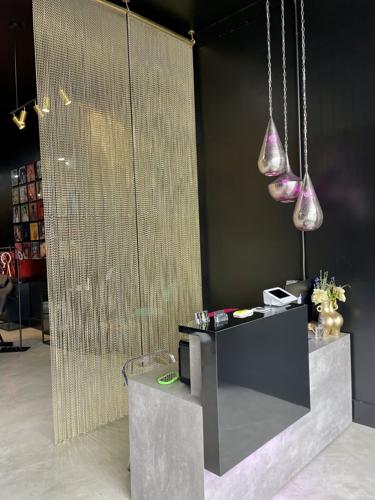 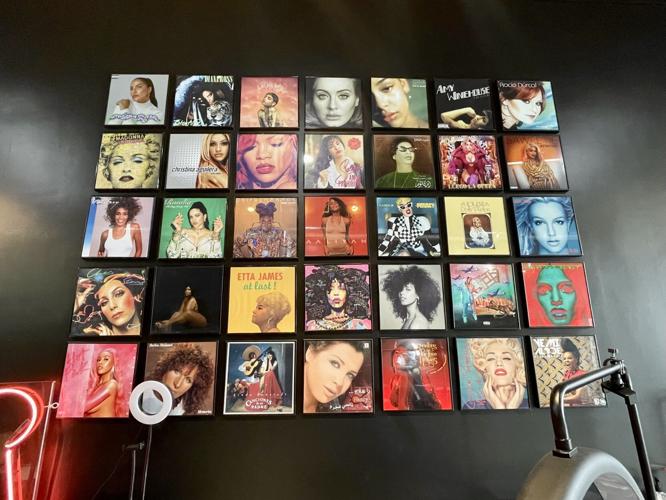 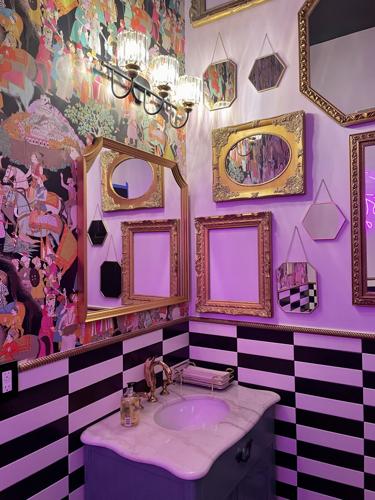 The inside of the bathroom at The Neon Door is the perfect spot to snap a selfie while at the studio. 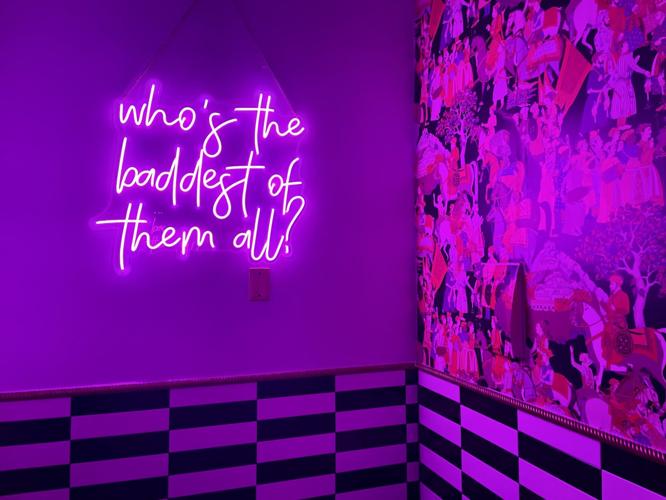 A neon sign that reads "Who's the baddest of them all?" hangs on the wall in the bathroom at the The Neon Door. 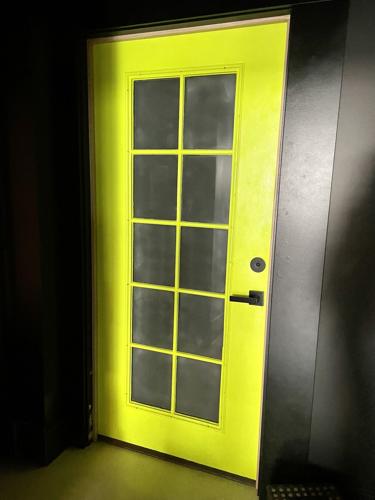 The bright neon door was originally the front door at the studio's previous location. Now, the door sits inside the new location as the artists' break room door.

As you walk into the local all-in-one beauty and tattoo studio, The Neon Door, you’re greeted by a curtain of gold chains, the sound of energetic music and two smiling faces waiting to welcome you to their beauty haven.

Those warm welcomes come from The Neon Door owners and artists Nejla Al-Rashid and Sophia Marin, who opened the original beauty house on historic Fourth Avenue nearly two years ago.

The entrance of the original beauty house featured a signature mark: an attention-grabbing neon chartreuse front door with 10 small window panes. The door became the inspiration behind the name of the studio.

As the beauty studio made the move to its current location a little farther down the street at 224 N. Fourth Ave. last week, the same neon door was in tow to be placed at its new home, this time inside the studio.

Now with the studio finishing renovations at its new location, the team of permanent makeup artists, tattoo artists, estheticians and hairstylists at The Neon Door are ready to bring an edge to Tucson’s beauty industry with its variety of unique services all under one roof.

The Neon Door offers permanent makeup services, non-electric hand-poked tattoos, tooth gems, and esthetics such as facials, lashes and brows, along with haircuts and color, teeth whitening, spray tanning and even scar and stretch mark camouflage and scalp micro-pigmentation.

“We're fulfilled where our team is fulfilled and where our clients feel like they're stepping into our house,” Al-Rashid says. “That's another part of our branding is, you know, we opened up our door to you and we definitely gear away from the stuffy salon spa feel. We want you to come and feel like you can hang out.”

The studio steers clear of the traditional salon and spa atmosphere with its midnight black paint, glowing neon signs and a section of framed album covers of artists including Doja Cat, Selena, Etta James, Yemi Alade and Tucson’s own Linda Ronstadt.

Along with the many eligible selfie spots in the studio, The Neon Door is home to what may be one of the most picturesque bathrooms Tucson has to offer, which the duo refers to as an “experience.”

With the flick of a switch, the bathroom transforms into what feels like a trip down the rabbit hole. The room illuminates in a pinkish-purple hue thanks to a neon sign that says, “Who’s the baddest of them all?”

And in case you forgot who the “baddest” of them all is, there’s a whole wall of framed mirrors to remind you.

“We very much have, like, that barbershop kind of feel where clients will be giggling at the stories of other clients and it's fun,” Al-Rashid says. “We do different things for our clients and plan to do more, and as you know, when you walk in you’re greeted and treated differently than you are in other spaces with what I think is that very high-end feel but at an affordable, easy, open space.”

Bringing a little bit of international flair to Tucson 💃

Al-Rashid and Marin have spent plenty of time outside of Tucson and hope to bring their national and international experiences back to the Old Pueblo.

Marin is originally from Florida but recently moved to Tucson from Los Angeles, where she worked in the photo industry at Milk Studios. While in LA, she picked up hand-poking tattoos as a “creative escape,” she says.

She began her tattooing journey by practicing on the skins of oranges and then herself and eventually a few close friends. In her three years of tattooing, she has tattooed koi fish, desert fauna and countless finger and hand tattoos.

After living in Dubai for 10 years, she returned to Tucson in 2017 with her husband and became a realtor.

“Designing there was amazing,” she says. “I met people from all over the world, I met my husband there. So it was just a great experience but I definitely wanted to come home and bring all the things that I've ended up with.”

As a lifelong brow enthusiast, Al-Rashid quickly realized that her heart wasn’t in real estate as much as in the beauty industry. Even while she was halfway across the world, she helped a close friend open up a salon in Cairo, Egypt, because that’s how passionate she is about the industry.

Now she’s a professional permanent makeup artist and has recently begun getting into the “medical side of tattooing,” she says, which includes scarring and stretch mark camouflage.

“I just always knew that I wanted to be a part of the beauty world,” she says. “I just didn't know where or how. And then when I got over here during COVID, I knew I didn't want to design anymore. I tried real estate and didn't want to do it. And then I was just like, I'm obsessed with permanent makeup. I've done a lot of permanent makeup myself. So I said, ‘You know what, let me just go and learn,’ and I did and I fell in love. And the rest is history.”

When one door closes, another (neon) door opens 🚪

The concept of The Neon Door was developed by Al-Rashid and Marin in 2020 when COVID-19 quarantine boredom was at an all-time high.

“I was kind of going crazy during COVID and my boredom,” Al-Rashid says. “And I was like, ‘Alright, so when this is over, what are we going to do?’ And it was like, well, I want to be a permanent makeup artist. I'm gonna open up a space and I want to do PMU (permanent makeup) and then maybe find other people (to join the business).”

Marin, whose partner is Al-Rashid’s brother, was the perfect business partner to start the inclusive beauty house with. The two had gotten close during quarantine.

“I think it was August of 2020, that both of us got on our hands and knees and fixed up the other space with like, zero money,” Al-Rashid says. “And we're like scrubbing and painting and fixing things up to make it look as cute as possible. Then we decided to just paint the door the neon color and that's where the name came from, because people would be like, ‘Oh, you got the neon door?’ or ‘Are you guys at the little space with the neon door?’ and we just thought it was a cute thing.”

Keeping inclusivity in the front of their minds, they chose to stray away from a typical pink or blue color for the door.

“From the beginning, we wanted to have a space that was inviting to everybody,” Al-Rashid says. “Because we want men, too, to come in and get facials, we want men to come in and get their eyebrows done. We have the scalp micro pigmentation, so that's geared towards men, you know, so we wanted a space that was for everyone, so getting away from like, I think that typical color like bright pink or blue (was important).”

Marin agrees, adding, “It is like a very different spot where a lot of people who might not necessarily feel welcome in other environments can feel welcome.”

“Whether you're 20 or 75, everyone feels welcome and they're getting treated the same,” she says.

Although The Neon Door duo has bigger plans for the future, like expanding worldwide, their current focus remains here in Tucson. They hope to have a grand opening celebration later this summer when University of Arizona students begin to trickle back into the city for the fall semester.

This Tucson-based lawyer also works as an artist, creating art inspired by the Sonoran Desert and her own journey of self discovery.

Local skateboarding crew, BABS, is an inclusive, primarily female-based group hoping to bring inclusivity and their love for skateboarding to Tucson's skating scene.

Tucsonan Jenny Wantland has designed and hand-painted Sonoran Desert-inspired hats for her online shop, Luna Bloom, for the past three years. The endeavor blends her passions for fashion, art and Tucson.

Tucsonan Gary Dykman built a 190-foot-long roller coaster in his yard for his three grandchildren to enjoy when they visit. He built the coaster five years ago, but recently went viral with a post on Facebook.

Refill your soaps, shampoos and cleaners at this local 'refillery' and zero-waste shop ♻️

Desert Rose Collective offers Tucsonans a chance to refill their empty containers with environmentally-friendly soaps, shampoos, detergents and cleaners. Shop owner Alena Straus hopes that refilleries such as hers will help reduce plastic usage and waste in landfills.

Crystals, gems and more: Get your metaphysical needs at Tucson's new crystal shop 💎

Aquamarine Daydream, located at 408 N. Fourth Ave. in Tucson, is one of the Old Pueblo's newest crystal and gemstone shops. The shop is owned and operated by Oregonian Lovisa Axtell, who has more than 10 years of experience in selling crystals and minerals.

A few of Tucson's iconic neon signs have lost their glow. Here's why.

A look into why some of Tucson's most iconic neon signs are in a current state of disrepair.

The PandemiDiarios program allows local community members to document their experiences of the COVID-19 pandemic through art. The selected winners of the program received a microgrant and their work archived in the University of Arizona's Special Collections.

Tucson Creative Comadres is a local networking group for Latina creatives and entrepreneurs in Tucson, Arizona. The group hosts monthly meet-ups where participants can mingle and enjoy coffee and snacks.

Yes, disco ball saguaros are a thing. This local artist makes them.

A local artist is creating handmade disco ball art inspired by the Sonoran Desert's saguaro cacti as an homage to her Tucson roots.

The Tohono O'odham Young Voices Podcast is a Southern Arizona-based podcast featuring contemporary stories of the Tohono O'odham Nation and other Indigenous communities. They recently hit a milestone achievement of 10,000 downloads.

Get permanent jewelry, from bracelets to necklaces, at this new Tucson boutique ✨

The Female* StoryTellers organization celebrated its 10th anniversary in 2022. Over the last decade, local women have shared amusing, heartwarming and even gut-wrenching stories about real-life female experiences. 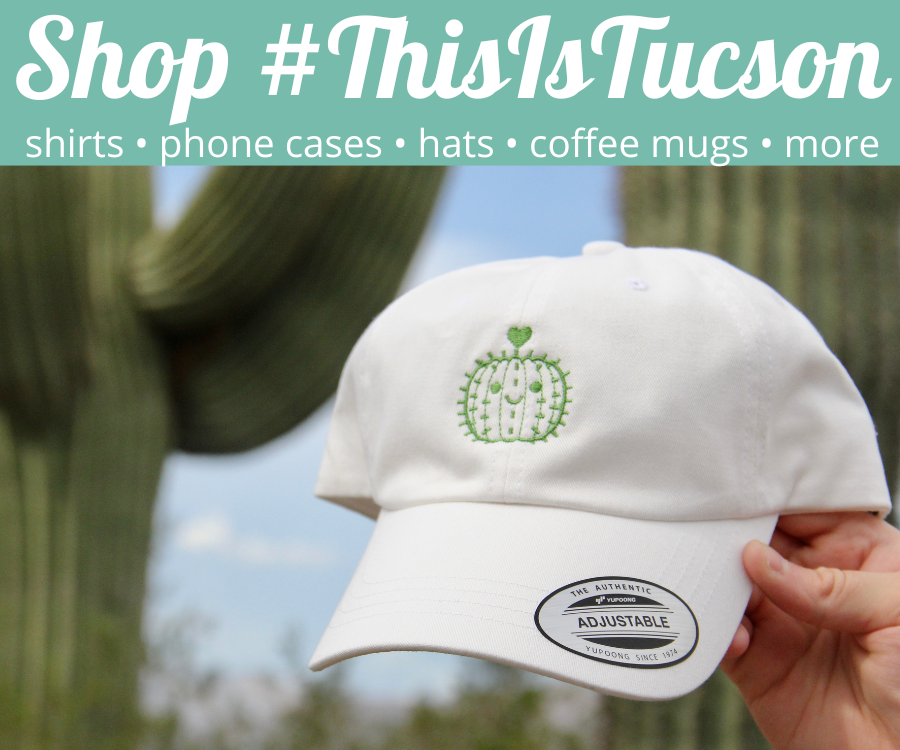