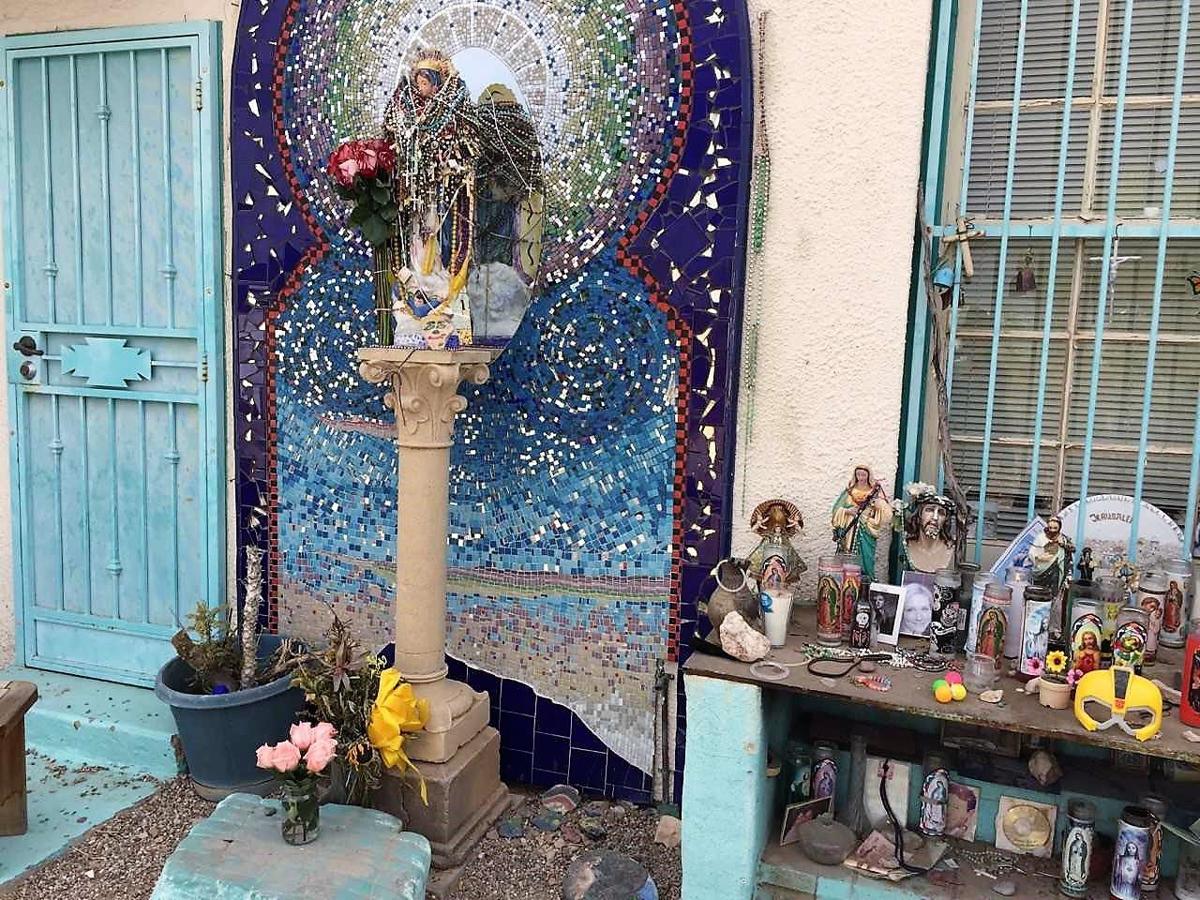 Our Lady of Guadalupe presides over a place of rest at the base of Tumamoc Hill. 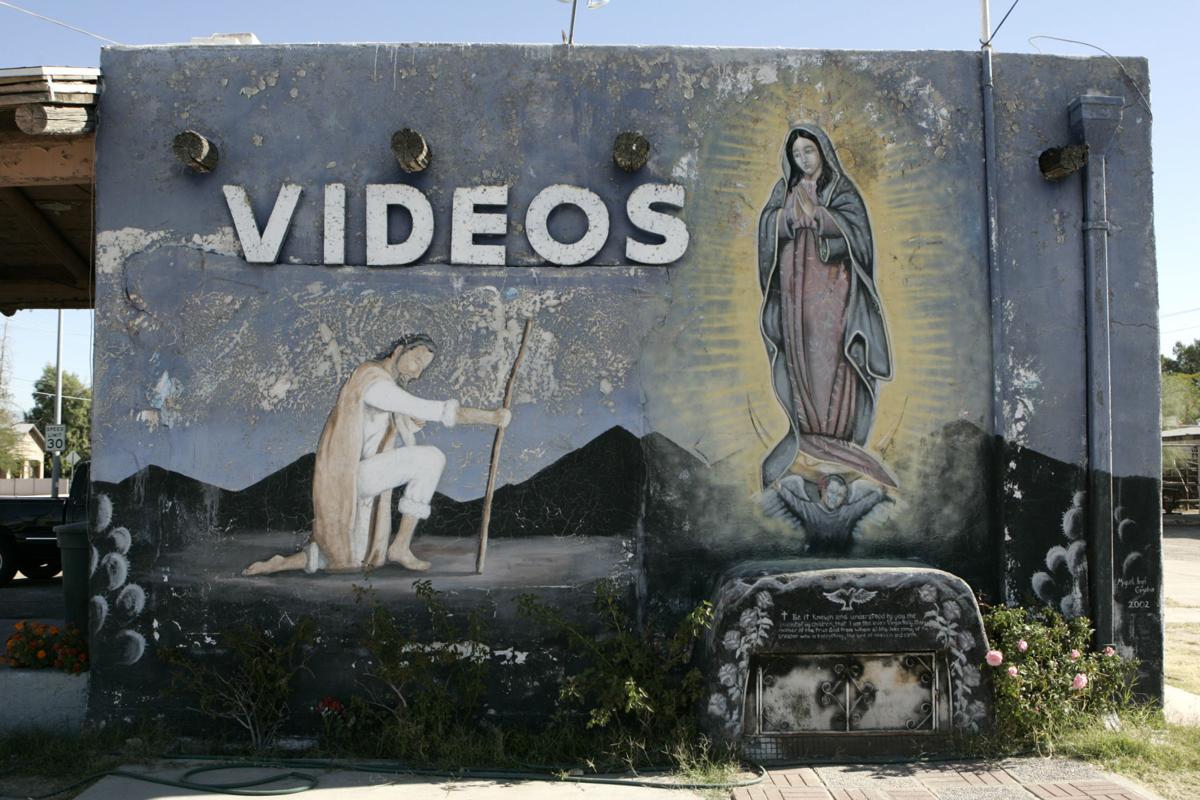 This image of Our Lady of Guadalupe and Juan Diego in 2006 on a wall outside Menlo Park Video, 914 W. Congress St. 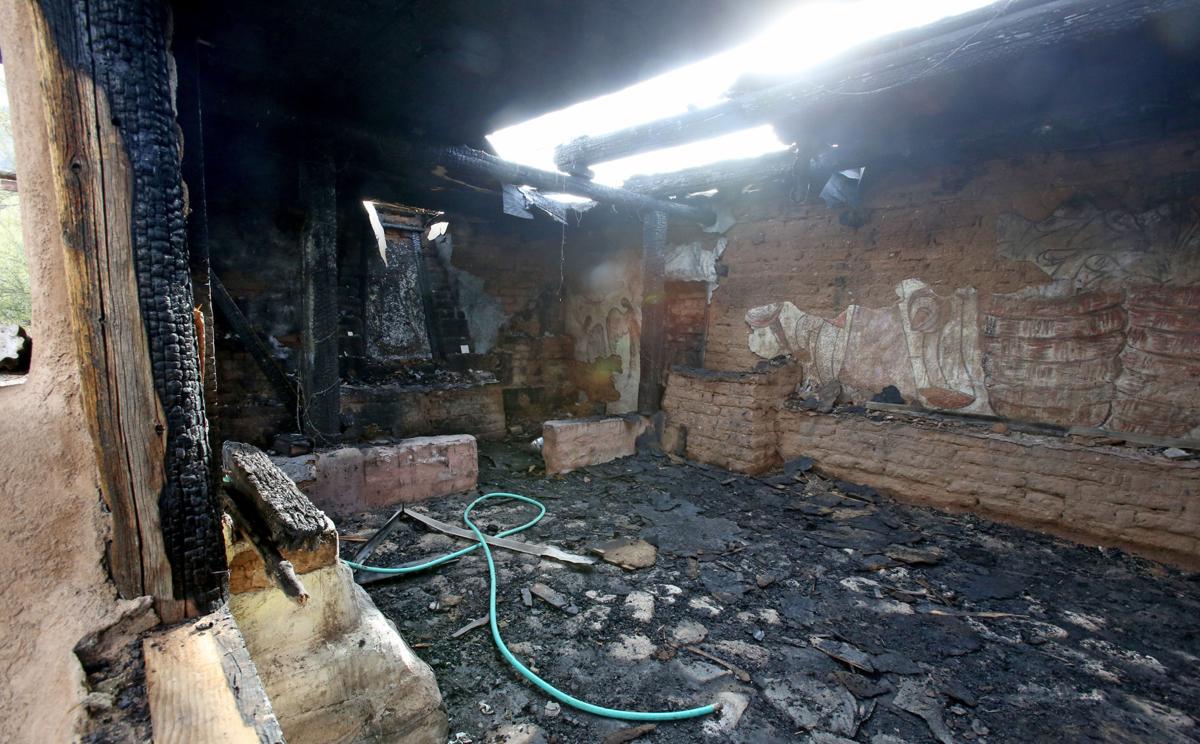 DeGrazia's Mission in the Sun, 6300 N. Swan, was one of the most peaceful places to honor Our Lady of Guadalupe. A fire damaged the chapel in 2017. 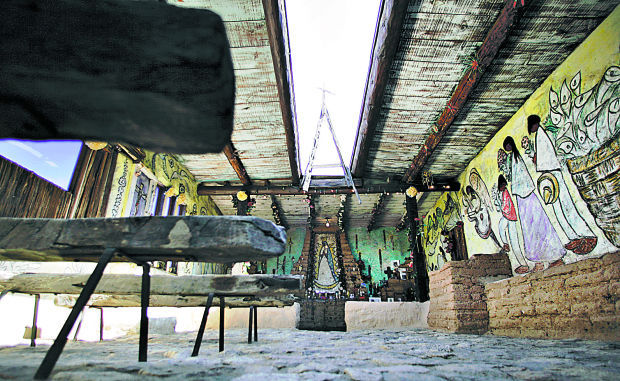 This is what Mission in the Sun at the DeGrazia Gallery in the Sun, 6300 N. Swan Road, looked like before the fire. 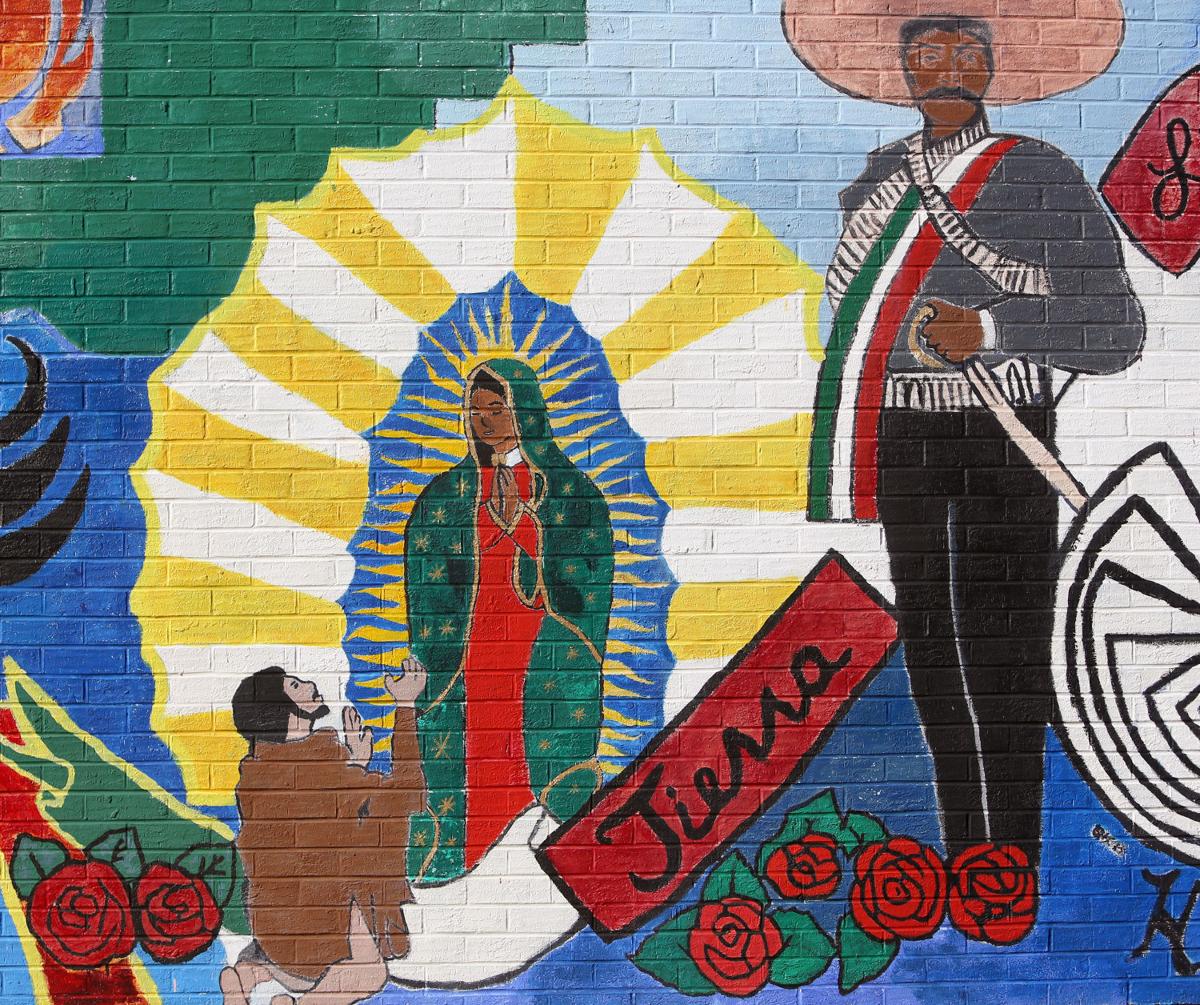 A mural at Sunnyside High School, 1725 E. Bilby Road, has incorporated an image of the Virgin of Guadalupe. 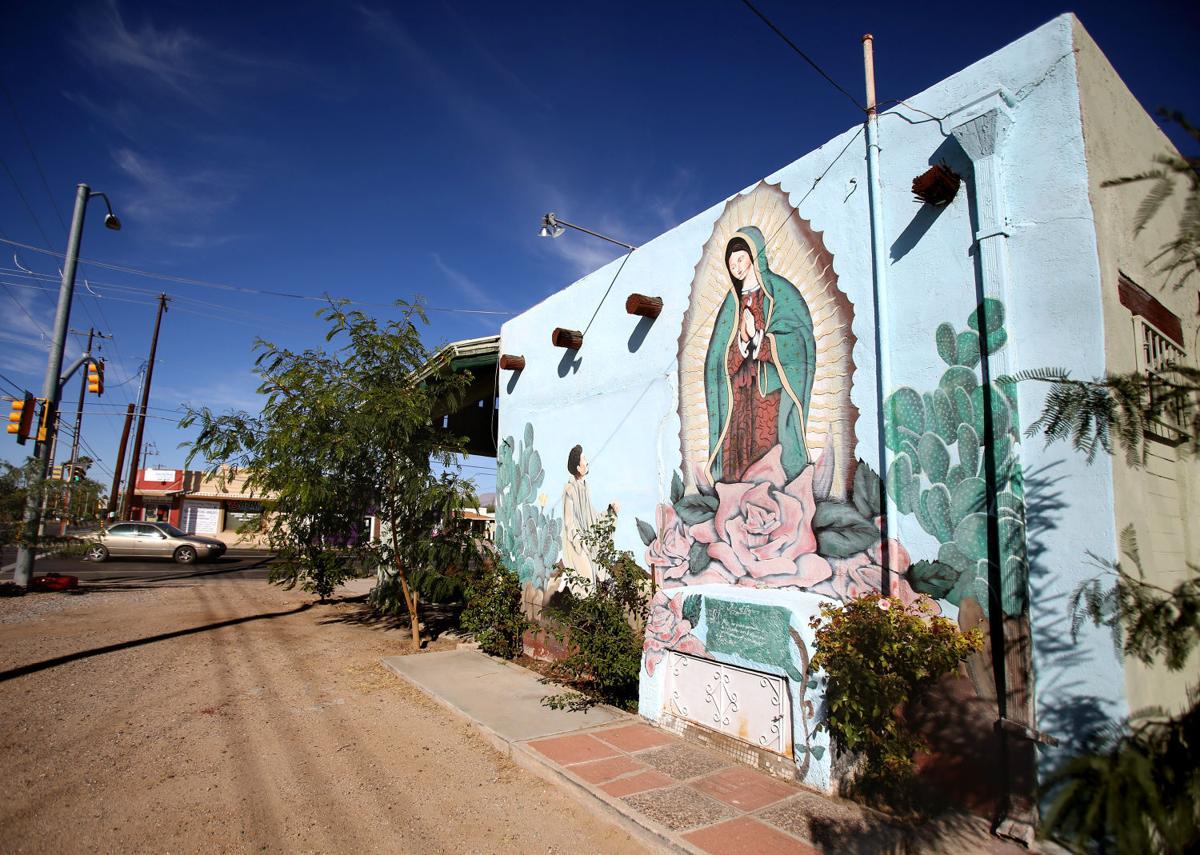 This mural on the side of a building at 914 W. Congress St. in Menlo Park shows a man praying to the Virgin of Guadalupe. 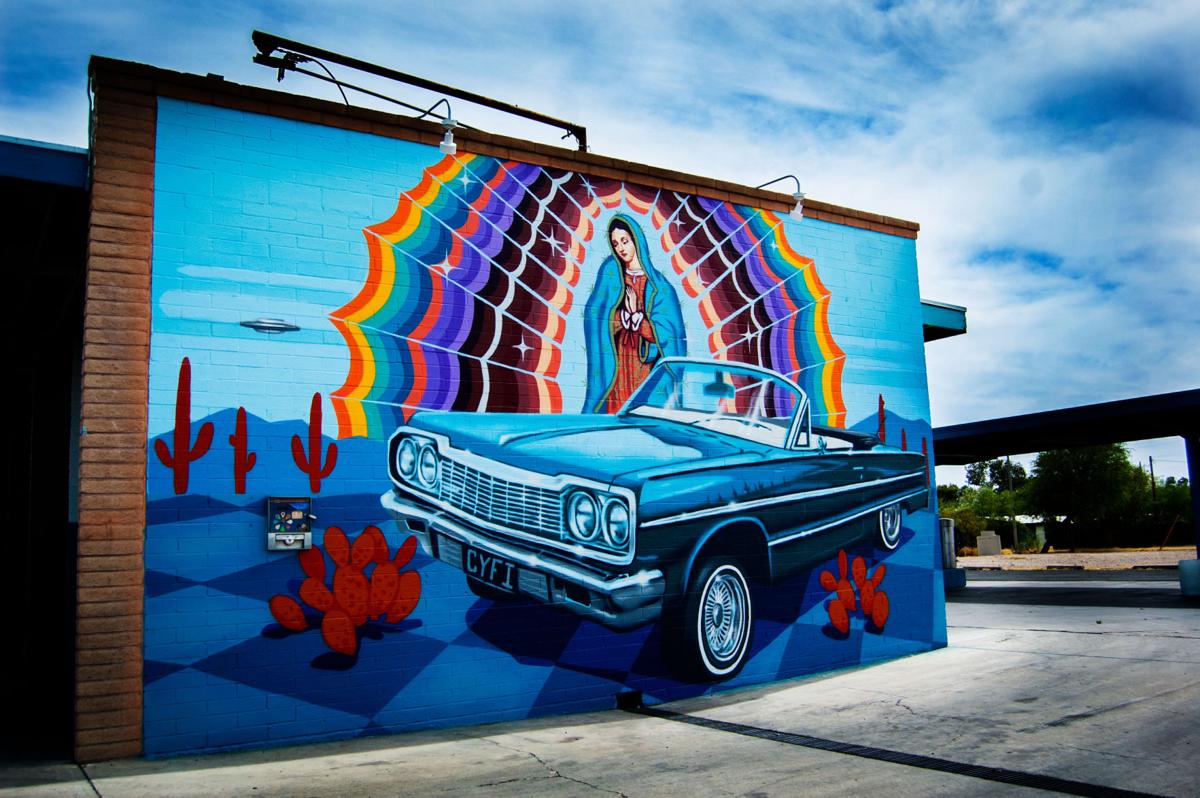 You have to get down to the south side to see this gem featuring the Virgin de Guadalupe from Rock "Cyfi" Martinez, creator of Agave Goddess. 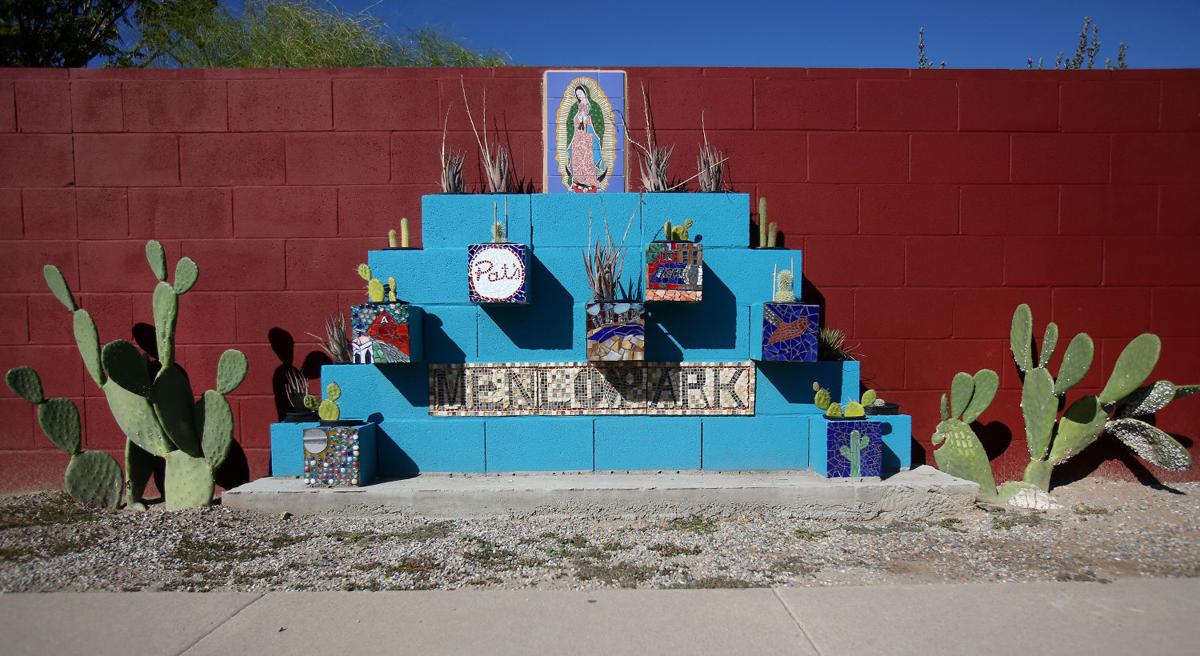 The Virgin of Guadalupe helps decorate a sidewalk planter in the 1100 block of West Congress Street. 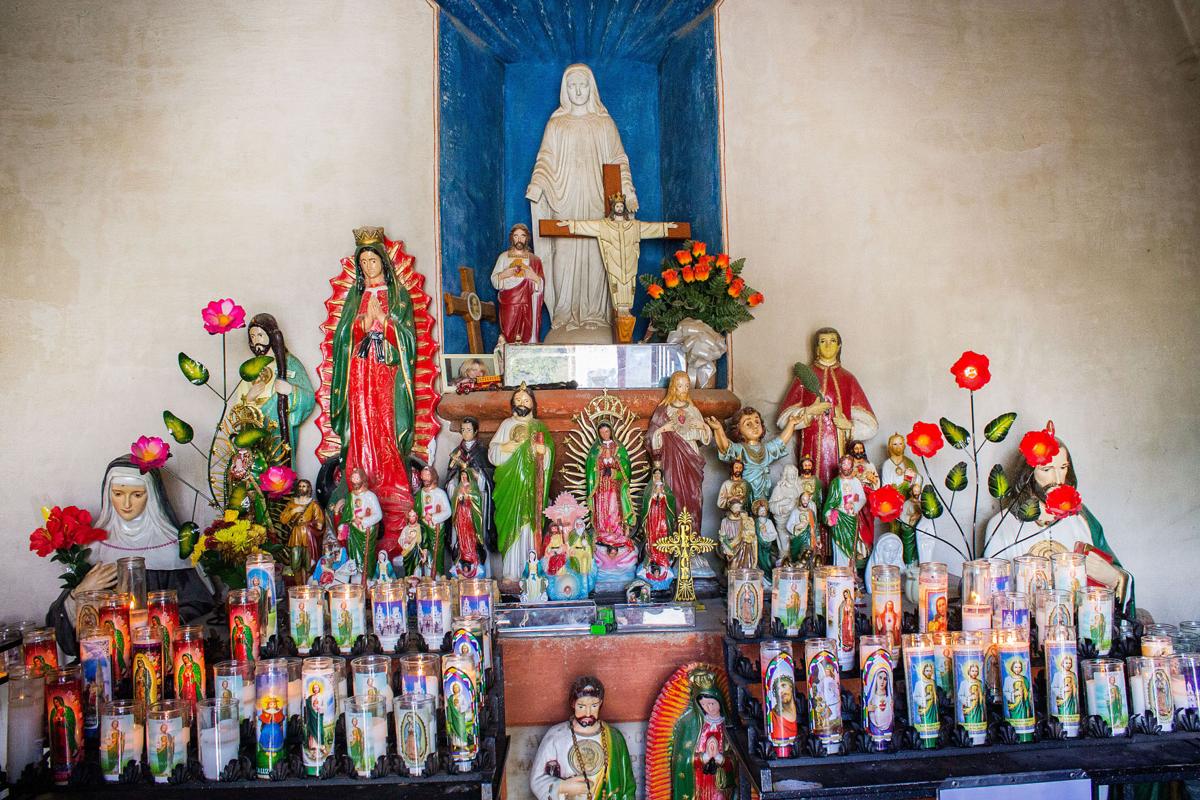 The virgen among a group of statues in the Mission San Xavier del Bac. 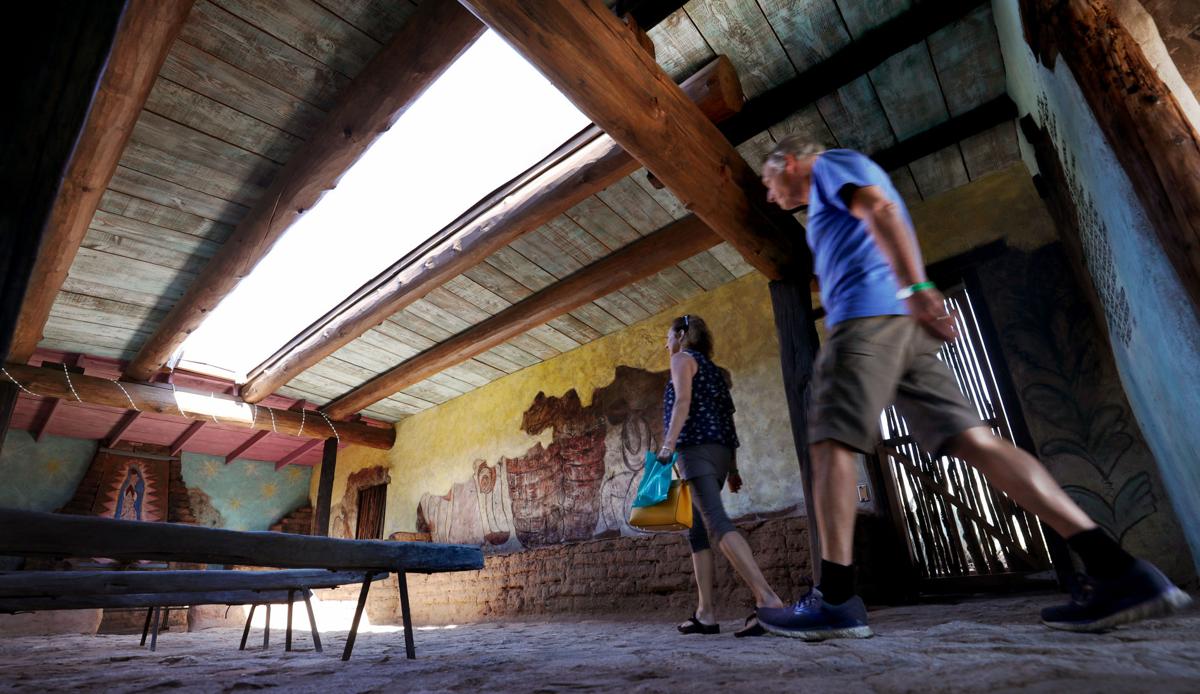 Heidi Derhy and her husband Rami, walk into the newly repaired and reopened DeGrazia Mission in the Sun, Tucson, Ariz., Oct. 18, 2019. The damage to the walls is evident in the murals, which are now missing large sections lost to the fire.

You've definitely seen her around town.

Maybe at the base of Tumamoc Hill or at Tucson's most elaborate, miniature nativity El Nacimiento.

Her images grace murals, churches, candles and places of personal devotion around Tucson.

She is, perhaps, Tucson's favorite Lady. And today is her feast day.

The feast day of Our Lady of Guadalupe on Dec. 12 celebrates the appearance of the Virgin Mary to Juan Diego, an indigenous peasant newly converted to Christianity. In 1531, she is believed to have appeared to him and expressed her desire for the construction of a church on Tepeyac Hill in the area of modern-day Mexico City.

She has been called empress, patroness and mother of Mexico and the Americas.

“Since she appeared in the Americas, it is what would be considered a regional devotion,” Monsignor Raúl Trevizo, the pastor at St. John the Evangelist, told the Arizona Daily Star a few years ago. “She spoke to the reality of the people of Latin America and the Southwest.”

In Tucson, devotion to the Virgin has been passed down through the generations, culminating on Dec. 12 — the feast day in her honor. Even some without Catholic backgrounds identify with Our Lady of Guadalupe or relate to her as an intercessor.

“It’s an image that people understand beyond the sense of their religion, and they understand it from an archetypal human point of view of motherhood and protection,” Susan Gamble, founder of Santa Theresa Tile Works, told the Star several years ago.

Gamble considers herself a “border dweller,” and she and the other artists at Santa Theresa Tile Works often draw on the region to inspire their work.

Tile Works artist Kristine Stoner created one of Gamble’s favorite depictions of Our Lady of Guadalupe as a commission for the Pio Decimo Center.

“I can imagine every young mother alive right now, especially an immigrant mother, can identify (with Mary),” Gamble said. “And the grace and dignity that she had — people can aspire to have that much love.”

Here are a few places we have spotted Our Lady of Guadalupe over the years:

Whether you're looking to treat your immediate family or pod to a special outing, or looking for something that will wow the hard-to-shop for person on your list, these ideas are guaranteed to make anyone feel like a VIP and will create lasting memories.

Winterhaven may be canceled, but there are still plenty of opportunities to get your holiday light fix in Tucson and beyond.

Learn about this elaborate Tucson holiday tradition at a virtual event

Tumamoc Hill, popular for Tucson walkers, is looking to enhance the base of the hill with gardens, shade houses and a backyard garden kitchen designed for future demonstrations and classes.