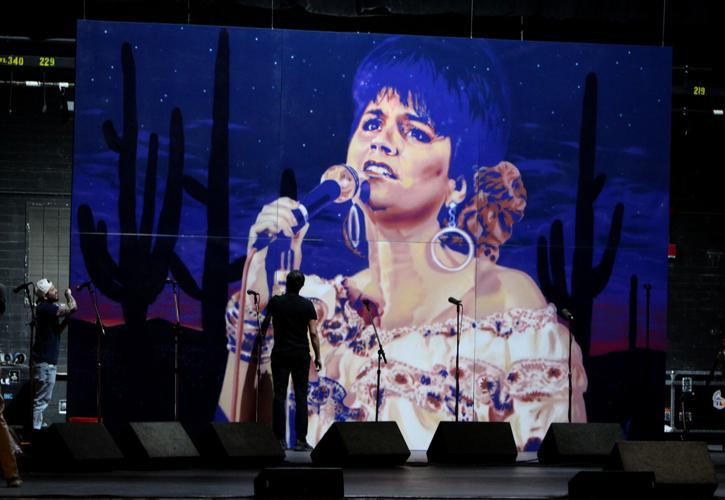 Dwarfed by its size, muralist Rock Martinez, middle, stands in front of his image of singer Linda Ronstadt while hanging it on the stage of the Tucson Convention Center Music Hall on Thursday, May 5, 2022. The Hall was renamed after Ronstadt during a ceremony at the 40th annual International Mariachi Conference Espectacular Concert. Ronstadt is one of the founders of the festival. 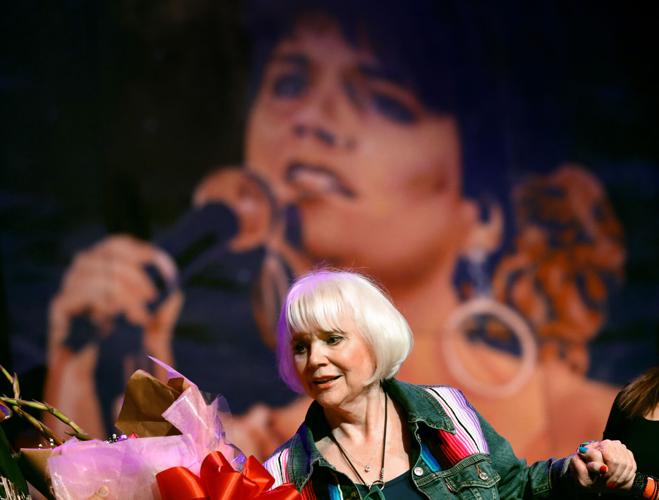 Linda Ronstadt stands before a Rock Martinez mural of her as she's honored by the crowd during the renaming ceremony for the Tucson Music Hall at The Linda Ronstadt Music Hall, Ariz., May 7, 2022. 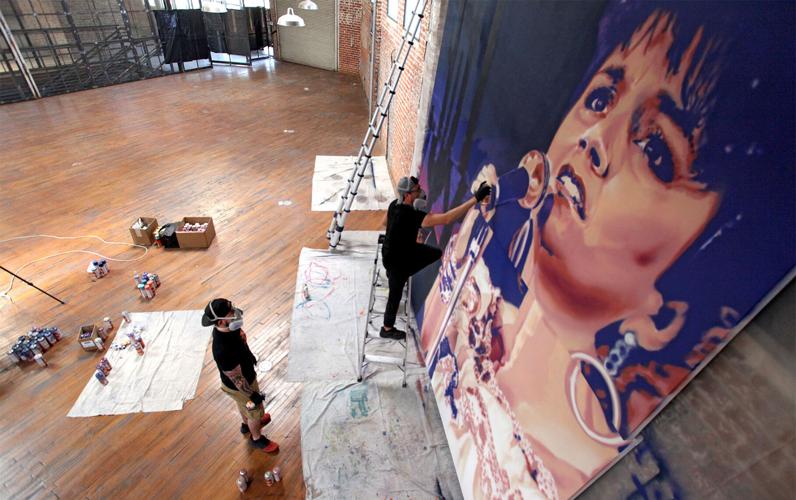 Muralist Rock Martinez, center, uses spray paint on his image of music legend Linda Ronstadt along with Joel Valdez, left, in a studio in downtown Tucson. The Tucson Music Hall was renamed after Ronstadt during a ceremony at the 40th annual International Mariachi Conference Espectacular Concert. Ronstadt is one of the founders of the festival. 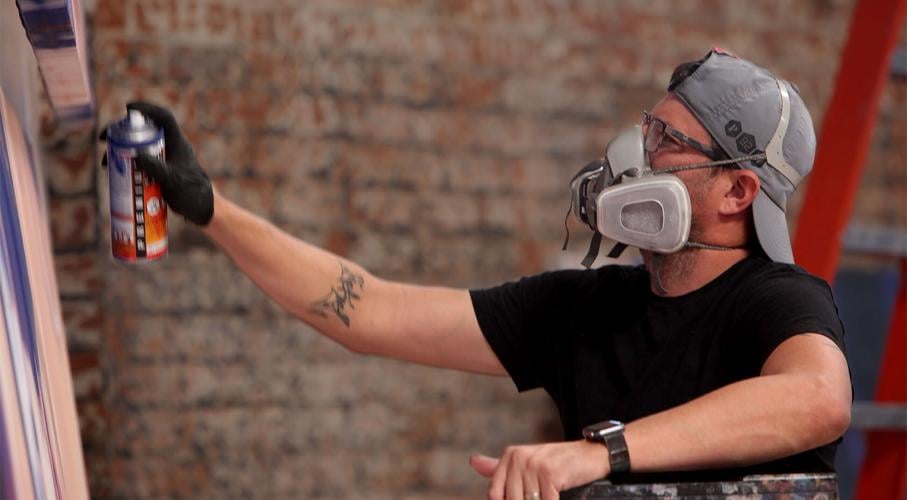 Painter Rock Martinez, 41, said he was inspired by a Linda Ronstadt interview. “I remember the interview being so heartfelt,” he said. 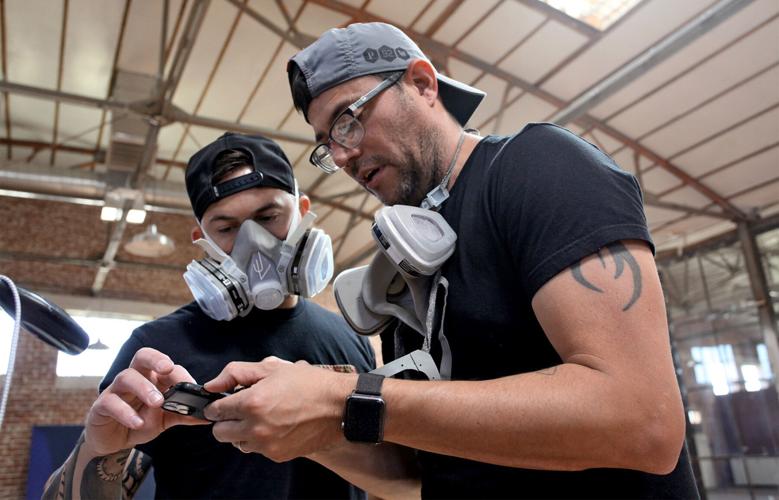 Joel Valdez, left, and Rock Martinez strategize their next move as they paint a mural of music legend Linda Ronstadt. The Tucson Music Hall was renamed after Ronstadt during a ceremony at the 40th annual International Mariachi Conference Espectacular Concert.

For spray can artist Rock Martinez, 41, that one thing was his ability to paint intricately detailed and brilliantly colored murals, sometimes using walls and the sides of buildings as his canvases.

Several years ago, the South Tucson-born artist was working on a show in the Midwest when he dislocated an index finger from the strain of constant spraying while using an inferior brand of paint cans.

He remembers pushing down hard on the nozzle with more pressure than usual.

“I heard a pop and realized something was horribly wrong and saw my finger swell up,” he said.

It was hyperextended. When he attempted to continue spraying, using his middle finger, then his thumb, it made the strain worse, sending excruciating pain throughout his hand and across his palm.

He left the show ahead of schedule, hoping that with time his hand would heal, especially with a European tour only days away.

Instead, he found his hand was so swollen he could not even open it.

He drew up a memory of a television interview that featured singer Linda Ronstadt, a Tucson native, reflecting on how she was coping with Parkinson’s disease, an affliction that robbed her of her singing voice.

“I remember the interview being so heartfelt,” Martinez said. “I was moved by how she found an appreciation for other things in life, even though everything she was known for was taken away.”

He was already a fan of her music, but the interview helped him find the confidence he needed to move forward.

“I was in this delicate stage involving the injury to my hand, but deep down I knew it would not last forever. Even if I had to use my teeth, I could still create. I drew inspiration from her.”

After he regained the use of his hand, Martinez became driven to show his appreciation to Ronstadt by painting a mural of the singer.

But then some questions arose: How would he get permission? Where would the finished piece reside when finished?

Weeks, months, then years passed. Martinez still had no resolution.

That did not dissuade him.

“I follow through with my ideas,” he said. “I do what I need to do to make it happen.”

His friend and fellow artist Joel Valdez, 30, the grandson of Tucson’s former city manager of the same name, knew of Martinez’s near-obsession and joined the search for a suitable location.

They met in 2011 through mutual friends and had collaborated on several art projects.

“I always knew of his injury and his need to create a project in her honor,” Valdez said.

Call it serendipity or just the way some things tend to happen in Tucson, but one night Valdez visited a friend and declared, “You’ll never guess who was at my parent’s house the other night … Linda Ronstadt.”

It was the break they were looking for.

Martinez approached Joel’s father, David Valdez, a film producer, to see if he could help.

Soon David joined in the search for a suitable mural site.

Meanwhile, Martinez wrote a letter to Ronstadt of his intentions for a mural and the reason behind it.

He wrote of her influence on mariachi music and said, “I have always tried to emphasize local talent and positive role models from Tucson.”

Martinez asked for her approval and shared his desire to paint her wearing mariachi regalia.

Little by little, the search settled around the Tucson Convention Center.

First, someplace outside, then perhaps inside. The arena or the music hall were both good options.

Then, as things happen in Tucson, in March of this year, it was announced the music hall was going to be renamed after Ronstadt.

Martinez was in Switzerland working on a project when the announcement was made.

“Everything fell into place like a dream,” he said. “It was all meant to be.”

But now time was of the essence.

With only weeks to prepare, the renaming dedication for the Music Hall was planned for the 40th annual International Mariachi Conference Espectacular Concert on May 7.

Several photographs were considered for the mural, but a black and white newspaper image taken of her on May 9, 1986, which ran in the Arizona Daily Star, was chosen.

Fletcher McCusker, entrepreneur and philanthropist, gave Martinez and Valdez a prime spot to paint the mural at 1 E. Toole Ave., once the site of Sinfonia HealthCare Corp.

With less than two weeks to go, Martinez, who now prefers to paint on canvas, went to work.

“Painting on canvas makes my work more mobile and gives me more control of the piece,” Martinez said.

After David Valdez helped him build the framing for the six canvases, Joel Valdez assisted Martinez with the painting.

At times they listened to Ronstadt’s songs from “Canciones de Mi Padre,” in the cavernous warehouse, bathed in soft, even light from the frosted windows overhead.

When the mural was finished, both Valdezes, along with some friends, helped Martinez assemble the panels and hang the finished 14-foot-by-21-foot portrait on the stage of the Music Hall in time for the dedication concert.

The mural is planned to hang in the lobby of the new Linda Ronstadt Music Hall, 260 S. Church Ave., where it will inspire others for years to come.

With Martinez’s wish now fulfilled, his mural celebrates Ronstadt’s return to her home and her roots and shows her forever singing “Canciones de Mi Padre,” the songs of her father.

A.E. Araiza is a native Tucsonan and former photojournalist and reporter for the Arizona Daily Star. In this occasional column, he will highlight voices of the Old Pueblo. The mural he writes about here is based on his 1986 photo of Linda Ronstadt at the Mariachi Conference Espectacular Concert.

Events happening this weekend and throughout May 2022 in the Tucson, Marana, Oro Valley and Sahuarita areas: Check out a maíz festival, brews at the Desert Museum, wine at the zoo, live music, local markets, car shows, stargazing and more.