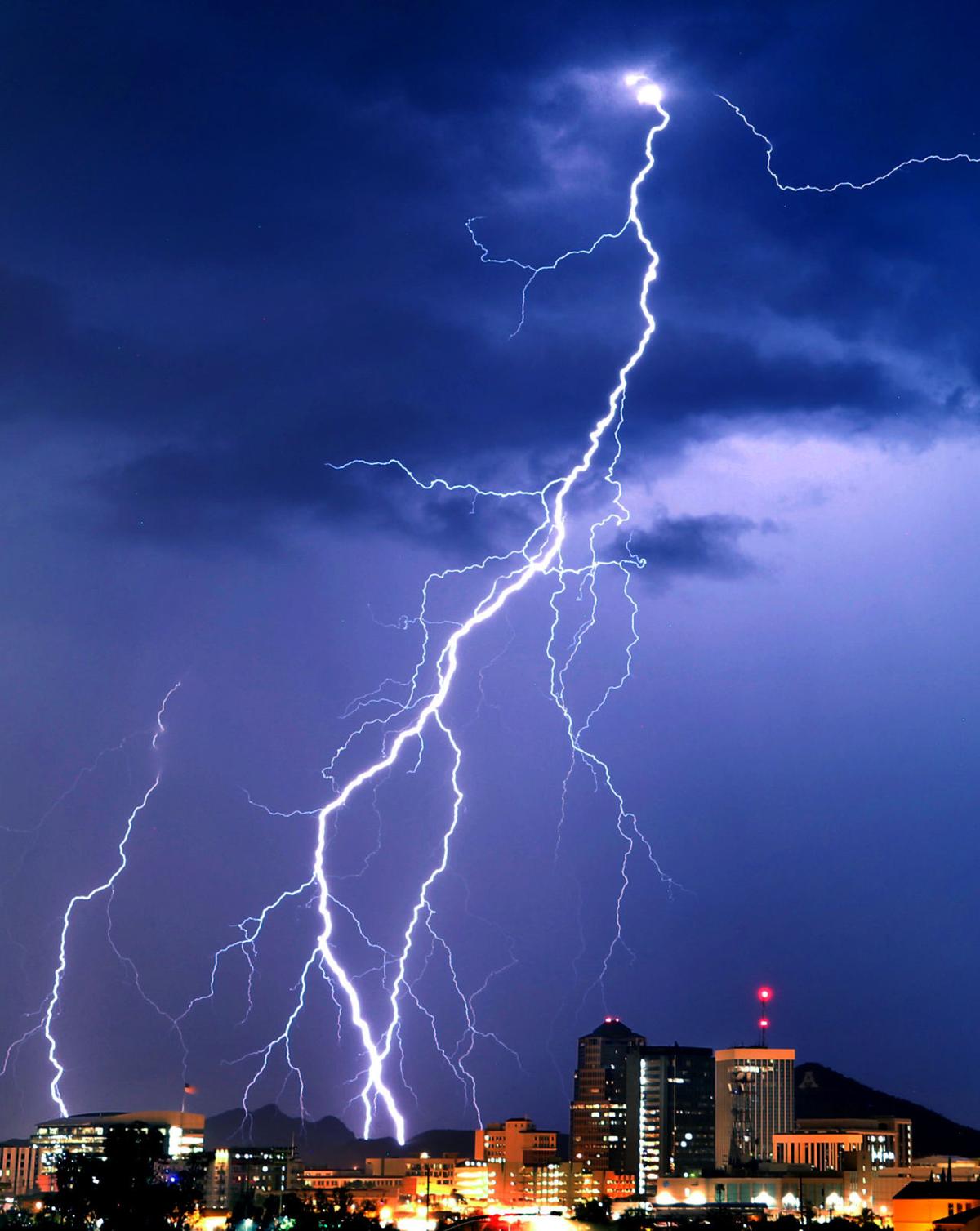 Several bolts strike just southwest of downtown, part of a monsoon storm that generated heavy lightning and some rain as it rolled over the area, Wednesday, July 12, 2017, Tucson, Ariz.

Lightning strikes as a monsoon cell skirts the ranges to the west of the city shortly after sunset on Aug. 7, 2020. Tucson received 1.62 inches of rain during last year’s monsoon. 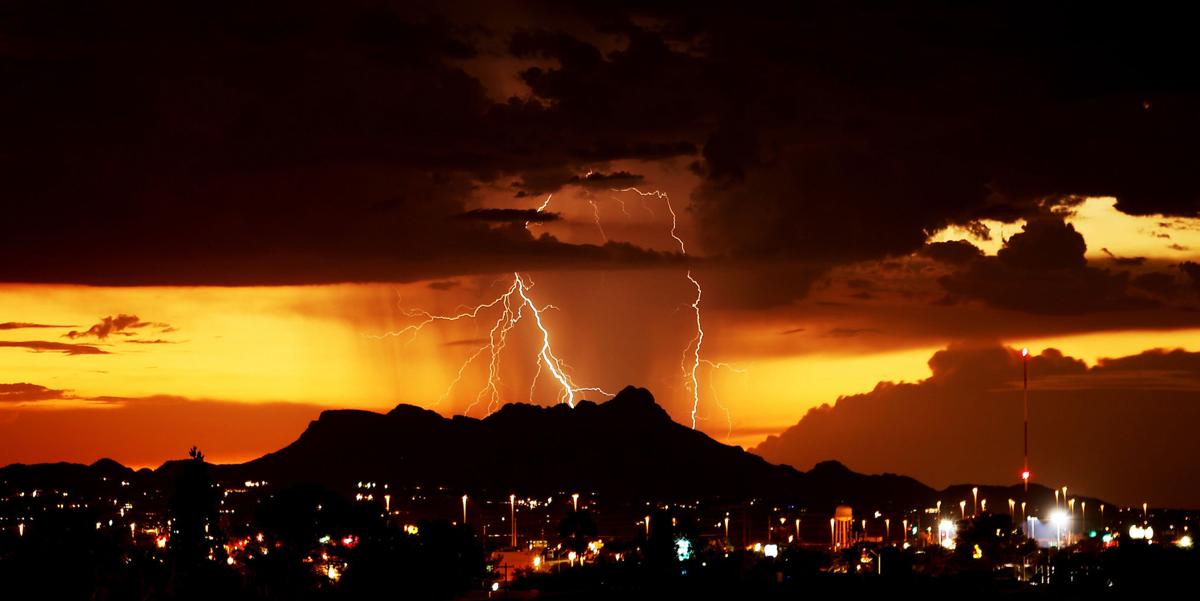 Lightning touches down with a rain cell northwest of town on July 31, 2017, west of Tucson, Ariz. 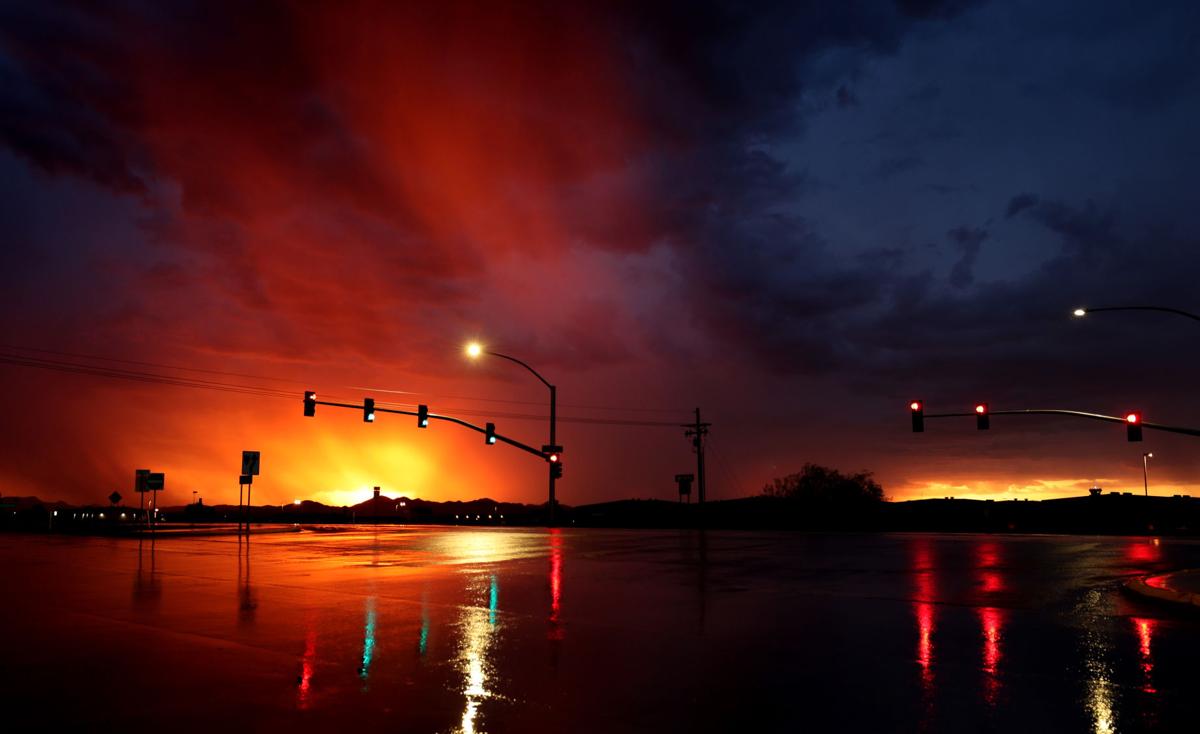 The sunset is reflected in the rain slicked intersection of Ajo Way and Valencia Rd., during the first of two bands of monsoon storms to roll over the area, Tucson, Ariz., August 28, 2019.

Last summer, Tucson experienced its second-worst monsoon on record — and yes, it was miserable.

The answer: It's complicated, but probably not.

"The chances of us seeing another record dry summer like we did last year is really low. Seeing that two years in a row is pretty far-fetched," says University of Arizona climate science extension specialist Mike Crimmins.

But of course, "everything is always possible in weather and climate," he says.

"It's possible, but it's remote — nothing anyone should lose sleep over."

Plus, it's still too early to tell.

The National Weather Service Tucson says monsoon season officially kicks off June 15 and lasts through Sept. 30 — but we usually see storms closer to July (y'know, when everyone starts panicking about Fourth of July fireworks).

But according to Crimmins, the latest report from the NOAA Climate Prediction Center says there's a slight chance of seeing below-average precipitation for this year's monsoon period.

"I want to stress this is a very uncertain and kind of a weak forecast," Crimmins says, adding that we're still far from the typical monsoon start date and that another report will be published in about a month. "I think, really the take-home for readers right now is we just don't know."

According to National Weather Service meteorologist Jeremy Michael, 70% of the state is currently sitting in an area of "equal chances," in terms of monsoon predictions. That means the chances of an average, above average or below average monsoon are currently all the same. But again, those predictions could change since we're still far from the typical start of monsoon season.

"It doesn’t really give a strong prediction one way or the other," Michael says.

And it's also important to understand just how bad last year's monsoon was.

"I remember being really grumpy about 2019 and I had no idea it could get worse or would get worse than that," Crimmins said of 2019's 5.1 inches of monsoon rain.

Tucson received 1.62 inches of rain during 2020's monsoon, according to Michael. The only time a monsoon has brought less rain than that was in 1924 with 1.59 inches.

To put into perspective just how bad those two years were, the third-worst monsoon jumps all the way up to 2.33 inches.

Last year "was a standout because it was so bad and nobody really won," Crimmins says. "Some years, maybe the airport gets missed but other parts of town are getting hit. But everybody lost last year."

An average monsoon brings about 6 inches of rain to Tucson, Crimmins says, with August generally being the wettest month.

"To be honest, even if we have a near-normal monsoon, it’s going to seem impressive because we’ve had a down monsoon for the past two years," Michael says. "So if we get something close to normal, it’s going to feel very active."

The last above-average monsoon in Tucson was in 2017, which recorded 8.6 inches of rain.

Last year was Tucson’s second-hottest year on record and Michael says it’s likely that Tucson will continue to see above-average temperatures this summer.

"The heat is like a silent killer. It’s been nice so far, but it’s going to catch up to us," he says.

We are waiting for more storms from monsoon season Tucson 2020. Southern Arizona's monsoon season brings with it intense thunderstorms, heavy rains and strong winds. This is Tucson weather to admire and respect.

Where to find swim lessons for kids in Tucson this summer

From free summer swim lessons offered by Pima County, to group lessons at the JCC and UA to private lessons offered at swim schools like DeMont, Saguaro Aquatics and Sunshine we rounded up a few options for kids starting as young as 2 months old.

What to plant during Tucson's monsoon season

You can plant a garden with fruits, veggies and wildflowers during Arizona's 2020 monsoon season. Monsoon gardening is a desert tradition. Get Tucson-specific gardening tips from Native Seeds / Search, Tohono Chul and more.

Pro tip: If you want to stay at the new Mt. Lemmon Hotel, book in advance

If you're looking to beat the heat at the new hotel in Mount Lemmon north of Tucson, reserve your vacation fast. June is already completely booked.

Print our newest coloring page, plus a few others from last year that talented Tucson artists drew up.

Relax by the resort pool, play a round of golf, surround yourself with local art or nature and find tons of activities at these hotels and resorts in Tucson and Southern Arizona.

Things to do this May 26-30 in Tucson, Arizona including virtual events, drive-ins, drive-thrus, open-air events and at-home things to do and things to do.

For Tucson tweens and teens who are too old for summer camp, but not yet old enough or ready for a summer job, there are still a few, fun options for beating boredom this summer.

Longtime Tucson caterer Kristine Jensen opened the neighborhood store as on offshoot of her catering business and focuses on farm-to-table, locally sourced foods.

Tucson's beach? A huge list of San Diego things to do and eat suggested by fellow Tucsonans

If you're looking to escape Tucson for a beach getaway, San Diego is about a 6-hour drive away. Check out beaches, eat a giant breakfast burrito, spot a seal, and say hi to a couple Tucson elephants at the zoo.

Farewell, monsoon season: Photos of the 2020 season in Tucson

Wednesday, September 30 is the official last day of this year's monsoon season, per the National Weather Service.