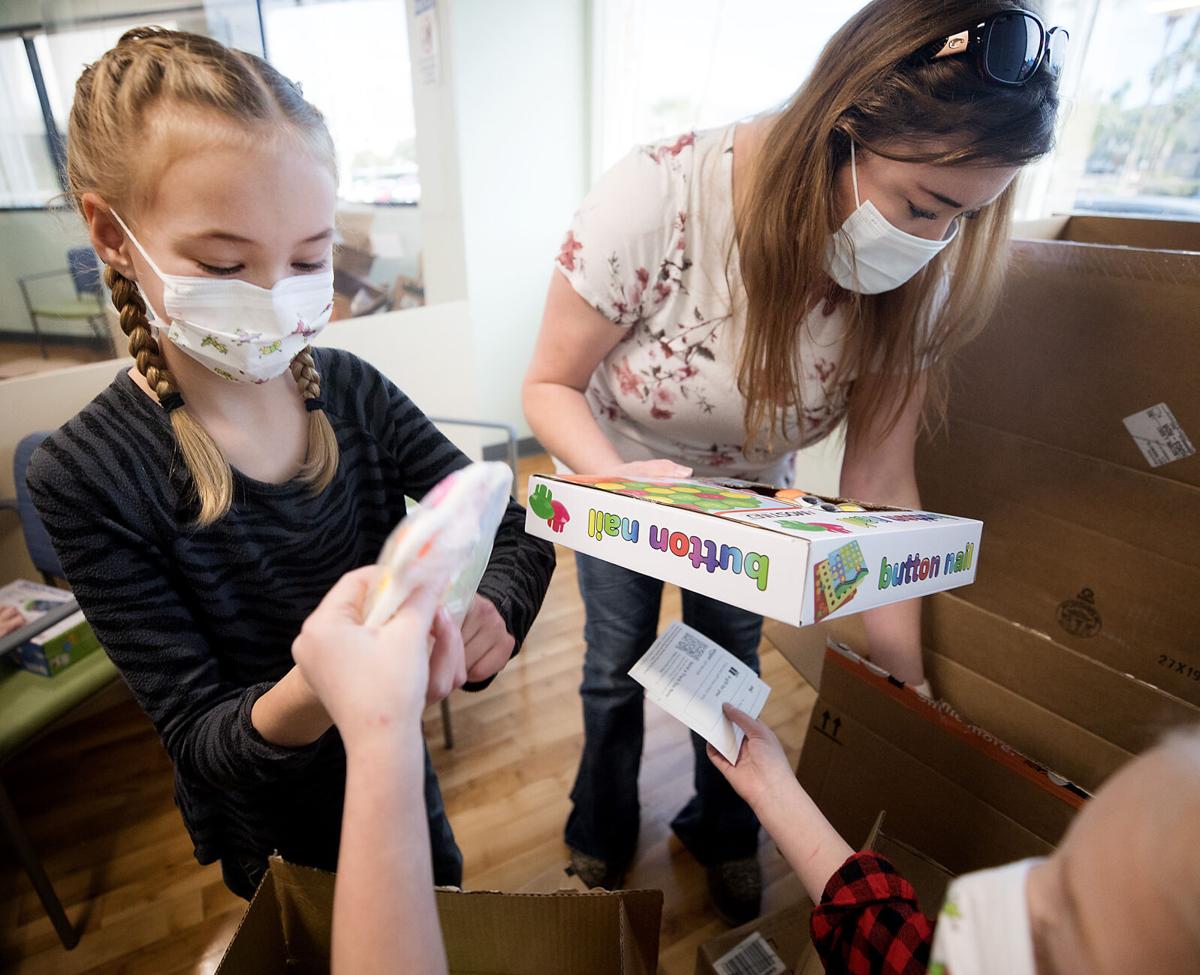 Brylee Binger, 10, left, was diagnosed with hemiplegia as an infant and at 9 months old started physical therapy at Tucson Medical Center Pediatric Therapy. For her 10th birthday, Brylee wanted to give back to the physical therapists who helped her learn how to walk and use the left side of her body. A wish list was created of toys and other items therapists use with their patients. On Wednesday, Brylee and her family delivered the items that were donated by friends and family. 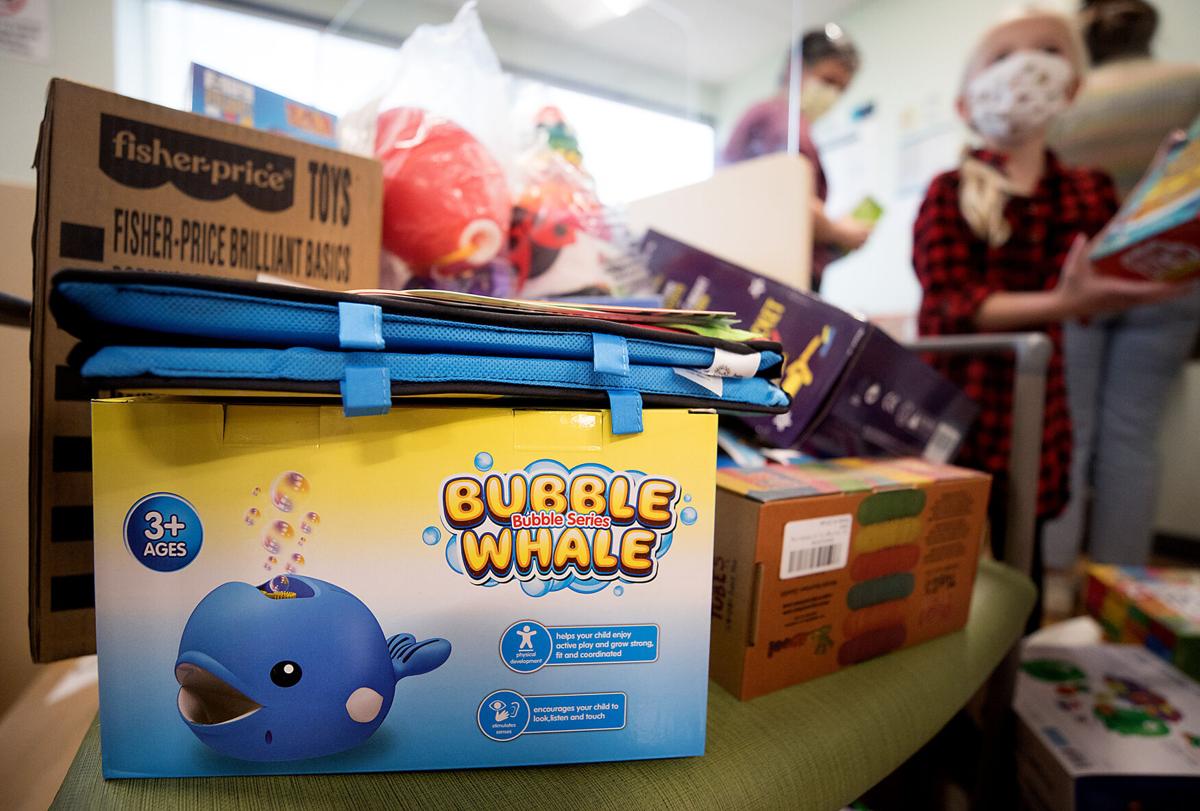 Gifts collected for Tucson Medical Center by 10-year-old Brylee Binger ranged from bubbles to board games to baby dolls.

For her 10th birthday, Brylee Binger knew she needed to do something special.

After spending her entire life receiving treatment at Tucson Medical Center Pediatric Therapy, Brylee wanted to give back in a big way.

With help from the community, Brylee and her family donated 91 new toys for the patients at the pediatric therapy center on Wednesday, bringing some Christmas cheer to TMC.

“We posted on Facebook: something’s coming soon,” Brylee said. “They were all wondering if we were going to have a baby, adopt, all that stuff, but no, we decided to do this and it’s just really fun.”

Shari Binger, Brylee’s mother, said she has always been a very sweet, loving and generous girl. When she was a baby, she suffered a stroke and developed hemiplegic cerebral palsy, making her left side of her body weak.

Despite only being a baby, Brylee said she remembers being really nervous the first day she went to the pediatric therapy center.

Now, Brylee goes to the pediatric therapy center every other week.

Charlene Fregosi, a pediatric physical therapist at TMC, has known Brylee since she was a baby. She has helped her with everything from working on holding her head up to sitting, crawling and walking.

“For each one of those milestones, her parents, her sister and all of us were cheering her on,” Fregosi said. “We didn’t know what the end was, but we were going to shoot for the stars, and look at her now.”

After going live on Facebook, Brylee started receiving donations from a handpicked list of toys specifically targeted to help patients at the pediatric therapy center. Out of a list of 100, Brylee received 91 toys.

“As parents, we were very excited and very humbled that our daughter would think about giving back to others,” Binger said. “All of these things are toys and tools that are going to help other kids at TMC. We're just one family that has been helped in the last 10 years, there's thousands and thousands of others and this is just going to help.”

When Brylee told Fregosi about her big birthday plan, Fregosi couldn’t help but shed some tears.

“She takes everything in that has been given to her and turns it into something better,” Fregosi said. “She is going to do something in this world.”

On Wednesday, Brylee and her little sister Tatum excitedly opened multiple Amazon packages of toys, ready to be used by other patients just like Brylee. The toys ranged from board games to baby dolls.

As other pediatric therapists watched the unboxing, Brylee greeted each of them with a big hug.

“We’re just a really grateful family,” Brylee said. “To all my family, all my friends, my loving sister and the therapists: thank you.”

The wishes scribbled and stapled to Winterhaven's popular Wishing Tree each year actually double as data for a science project that began in 2000.

Things to do this weekend Dec. 22-26 in Tucson, Arizona include holiday events such as lights displays, shopping, live music and more.

Find seven holiday book recommendations and our favorite spots in Tucson to read them, including the MSA Annex, Fourth Avenue and Silverbell Lake.

Ring in 2022 with these local celebrations and late-night New Year's Eve parties in the Tucson, Arizona area.

Tucsonan Allona Mulkey was crowned Ms. Arizona 2022 last October. Now, she's headed to Las Vegas in February to compete with nearly 50 other competitors for the national title of "United States of America's Ms."