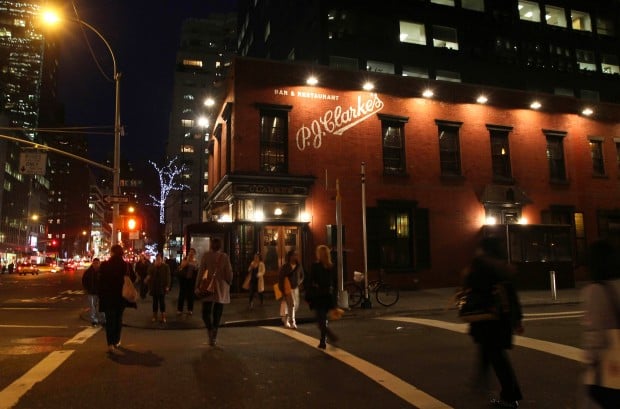 P.J. Clarke's bar at East 55th Street and Third Avenue in New York is one of many bars and restaurants in Manhattan featured on the AMC show "Mad Men." 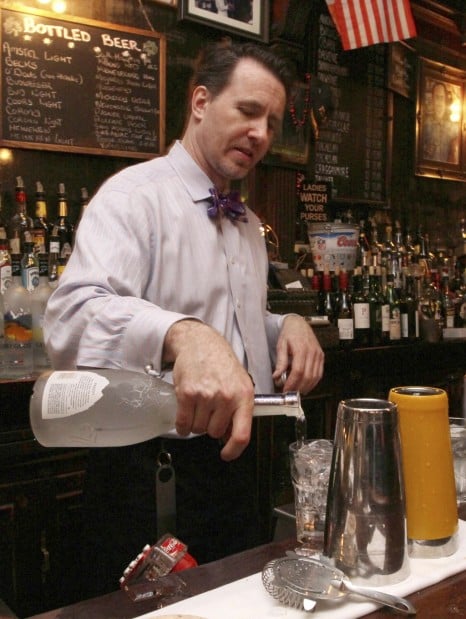 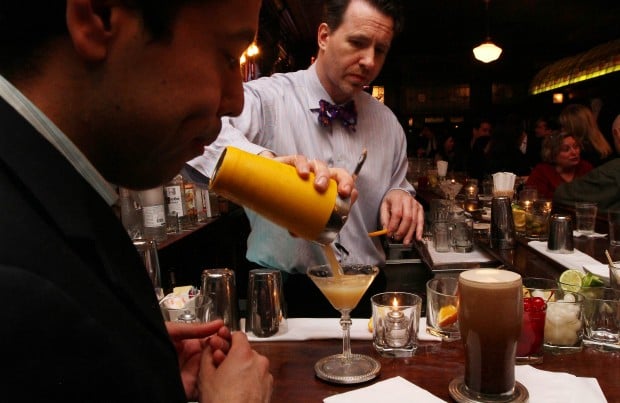 The return of the AMC show next Sunday after a hiatus of a year and a half is cause for celebration, and there's no better place to raise your glass than in Manhattan at one of Don Draper's favorite haunts.

While many of the places name-dropped in "Mad Men" no longer exist - Lutece, the Stork Club, Toots Shor's - there are plenty that do, among them P.J. Clarke's, the Roosevelt Hotel and Sardi's.

Of course, the series is filmed in California, so what you see on TV are well-researched sets, not real Manhattan bars. But "Mad Men" fans will not be disappointed by reality.

Judy Gelman and Peter Zheutlin, authors of "The Unofficial Mad Men Cookbook," provide "A Handy List of Mad Men Haunts" in their book along with recipes from them.

"Some of these places just never go out of style, like the Grand Central Oyster Bar," said Zheutlin.

"Mad Men" aficionados know the Oyster Bar at the landmark train terminal was not mentioned by name on the show, but it's believed to be the place where Don takes Roger Sterling for a martini-and-oyster lunch.

P.J. Clarke's, at Third Avenue and 55th Street, manages to appeal to a trendy 21st century sensibility while channeling the classic cool that got the crowd from "Mad Men" ad agency Sterling Cooper drinking and doing the twist. P.J. Clarke's "was the site of many 'Mad Men' parties," Gelman said.

According to its real-life bartender, Doug Quinn, P.J. Clarke's "was a joint often frequented by Madison Avenue advertising executives during the 1960s. Our bar and restaurant continues to be a destination for this crowd."

Quinn says he'd recommend a sidecar cocktail to any "Mad Men" fans dropping by - "one part sweet, one part sour and one part strong." For food, try a medium-rare bacon cheeseburger, once named "the Cadillac of burgers" by singer Nat King Cole. "It continues to be one of our most ordered menu items," Quinn said.

The Roosevelt Hotel, 45 E. 45th St. at Madison Avenue, where Don stayed after his wife, Betty, threw him out, is offering a "Mad Men in the City" package, starting at $425 a night through June 30, so guests can "experience New York City as Don Draper would," according to Kevin Croke, the hotel's director of sales and marketing.

The package includes accommodations, '60s-era themed cocktails at the hotel's lobby-level Madison Club Lounge or its rooftop bar, called mad46. Guests also get a DVD of the show's fourth season, a copy of "The Unofficial Mad Men Cookbook," and tickets to the Paley Center for Media at 25 W. 52nd St., where the hotel has reserved a screening booth for viewing ads from the era.

The Pierre, a Taj Hotel, at 2 E. 61st St., which in "Mad Men" housed offices for the Sterling Cooper Draper Pryce firm, will host a party March 27 at its Two E Bar/Lounge in honor of the new season. Fans are invited to dress up in their favorite "Mad Men" outfits and try cocktails like a creme de menthe grasshopper or a "bikini martini," a gin, schnapps and blue curacao drink created in honor of the character Joan Holloway. The $14 cocktails will be offered Tuesdays, 6:30 p.m.-9:30 p.m., along with a no-cover jazz duo.

One of the best places Zheutlin and Gelman ate while researching their cookbook was Keens Steakhouse, 72 W. 36th St. They found the steak "sumptuous," and were amused to learn that Keens' top chef had no idea the restaurant turned up in "Mad Men." (It was the site of a client lunch in which Don and Pete Campbell discuss the sport of jai alai.)

Sardi's, 234 W. 44th St., was faithfully re-created in a "Mad Men" episode, right down to the framed caricatures on the wall. Other "Mad Men" scenes took place at Dublin House, 225 W. 79th St., an old Irish pub where, on the show, Joan's husband gets drunk; The Palm, 837 Second Ave., a seafood and steak restaurant; and Barbetta, an Italian restaurant at 321 W. 46th St., which Gelman says remains "absolutely luxurious and romantic. You feel like you've gone to another era."

Everyone’s going to Hawaii, and the resorts aren’t ready

After a record visitation year in 2019, the coronavirus pandemic brought Hawaii’s tourism industry to a screeching halt, delivering both residents and the environment a much-needed breather. Now, tourism has roared back—almost too loudly. For the week spanning June 1-8, the state saw 2,000 more arrivals than it did in the same period in 2019. Standard room rates at luxury resorts are pushing ...

Right now in Iceland: Hot lava and a warm welcome

In the land of fire and ice, where glaciers creep across volcanoes and fulmars soar from the sea cliffs, there are jaw-dropping natural attractions at every bend in the road.

Taking the kids: Calling all cowboys and cowgirls

The Mattsons were supposed to be in Alaska. Instead, the Kansas family were exploring the Southwest for the first time, riding horses, rock climbing and, honing their archery skills at White Stallion Ranch outside Tucson, and despite temperatures in the 90s, they couldn’t be happier.

Measures such as wearing a mask are important for immunocompromised travelers who may not have had a normal response to a COVID-19 vaccine.

Airstream unveils a camper van that you can take off-road

With a starting price of about $214,000, the Interstate 24X has knobby off-road tires and all-wheel-drive, allowing it to crawl along muddy rutted trails with less chance of getting stuck.

A Chicago writer traveled across COVID country USA, following the fabled Route 66. On his bicycle

What sort of person decides, standing in a foot of Chicago snow in February, that it would be a good idea to ride a bike from Chicago to the West Coast, following the storied Route 66?

After a near-eternity spent hidden away in their burrows, they’re about to crawl out, take to the skies and make a loud nuisance. Yes, vaccinated American tourists are ready to…

Caroline Lupini didn’t just break a world record, she smashed it out of the park. In May 2021, Lupini became the first documented woman to fly a small, piston-engine aircraft to all 49 states, and with her flight instructor Chauncey Crail, also set a new record for the fastest time through the lower 48 states—a […]

Americans will once again be able to travel to Ireland starting on July 19, and Tourism Ireland has launched a multimillion-dollar campaign to help people get there.

P.J. Clarke's bar at East 55th Street and Third Avenue in New York is one of many bars and restaurants in Manhattan featured on the AMC show "Mad Men."