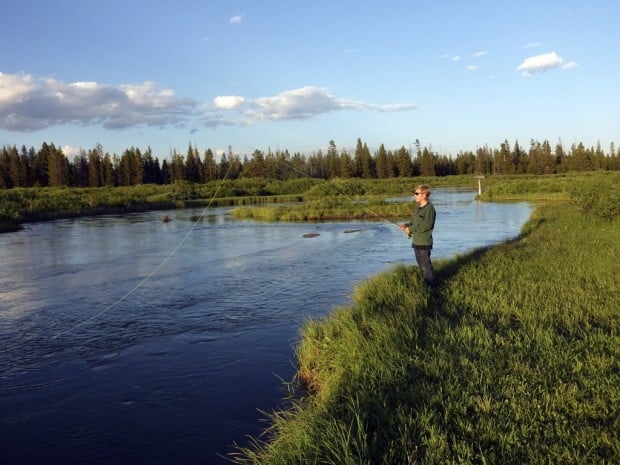 The author's cousin, Evan Butler, fishes along the South Fork of the Madison River near West Yellowstone, Mont. The river gave up three dozen brook trout on this pristine day. 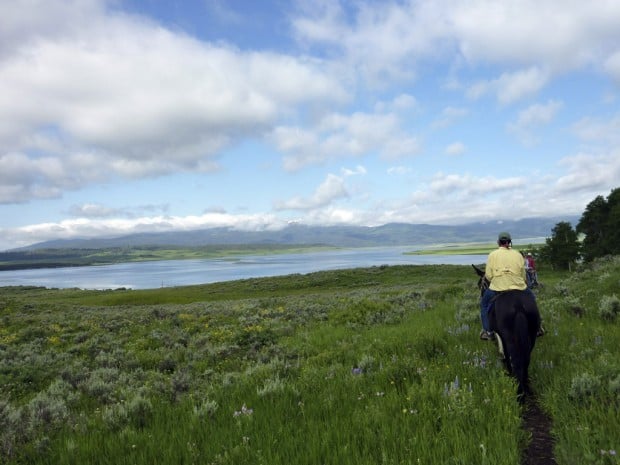 A visitor rides a mule through a meadow at Parade Rest Ranch, which nestles in the foothills of the Gallatin Mountains overlooking Hebgen Lake about 10 miles from the touristy bustle of West Yellowstone, Mont. 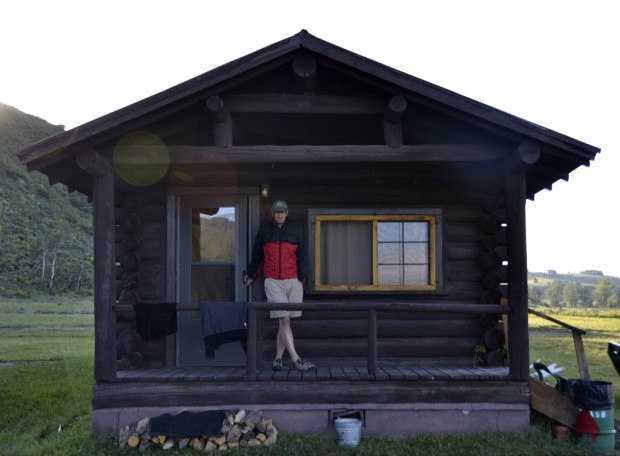 The author, Desmond Butler, pauses on the porch of a rental cabin at Parade Rest Ranch. He fished a little creek just steps away.

TWIN BRIDGES, Mont. - Ahead of my fishing trip to Montana in early July, my old fly-casting instructor gave me some troubling advice.

"Cancel your trip," said Dusty Wissmath, who guides in the region. "Rebook for September - it's going to be epic."

It was the end of June, and the fabled rivers of southwest Montana - the Big Hole, the Madison, the Gallatin - were swollen and impenetrably brown from the runoff of huge snowfall that had left them nearly unfishable.

I winced, but I knew better than to listen. Except for the coldest winter months, there is no bad time for fishing where I was headed.

I was lucky enough to be going fishing during the warmest month of the year in a place so full of beautiful water and big trout that I daydreamed about it for weeks. Floods, storms, grizzly bears and even a warning from a mentor were not going to get in the way.

For some of us, fly fishing is an obsessive sport that drives the afflicted to bouts of monomania. A psychologist I know, who likes to fish, compares it to gambling.

My wife has come to accept my hobby so long as I indulge in it only at times when she won't be outnumbered by our two children. She kindly let me go to Montana with my mother and nephew while her mother was in town.

My plan was to land in Bozeman, drive to our family place near Twin Bridges, fish six days with pauses to sleep and eat, then come back replenished.

Dusty was right that the big snows had limited where I could fish. I would have loved to hunt fat brown trout on the Madison near Ennis, for instance, but in fly fishing parlance, that part of the river was blown out. All the churning water makes it hard for the fish to see a fly and dangerous to navigate the river. In late June, a man apparently drowned when his raft flipped while he was fishing the swollen Big Hole. His body was found two weeks later.

Luckily, Twin Bridges has many options for fishing locations. It sits at the confluence of some of the greatest trout water on Earth. In town, the Beaverhead, Big Hole and Ruby rivers join to form the Jefferson, which flows about 80 miles before meeting the Madison and the Gallatin to become the Missouri. Aside from these renowned rivers, there are smaller spring-fed creeks, mountain streams, lakes and reservoirs. Plus Yellowstone Park's lifetime of fishing is only two hours away.

In my week, I fished five big rivers, three creeks and a mountain lake, all stretches I had never seen before. Even with all the unsettled waters, my choices seemed unlimited.

By the time I arrived, a beautiful thing had happened: The Big Hole had dropped and cleared. It was not just fishable but fantastic. I was a happy man because the river has the greatest combination beauty and bounty of any I have ever fished.

A lot of big rivers take weeks to clear after mountain snows begin to melt. But I learned that the Big Hole heals quickly and fishes most days.

One day, I fished with Greg Smith, the owner of the Four Rivers fly shop in Twin Bridges. We picked a section lined with red rock canyons, cottonwood groves and ranches that were lush and green from all the water.

Greg, who has fished the Big Hole since the late '80s, says its landscape and waters are more diverse than any he knows.

Happily, we saw an abundance of the kinds of bugs that trout (and fly fisherman) like. Two kinds of stoneflies were hatching from the river's depths along with caddis flies and a large mayfly called the brown drake.

Fly fisherman watch the bugs that are hatching, because trout will often key in on one kind of offering at a time. If you can figure out what that is and match it with an artificial fly, you might catch a lot of trout. Many trout fisherman prefer to imitate airborne insects that land on the water. The bigger the insect, the better, because it is fun to track a large fly and to watch a big trout smash through the surface and take it back down.

That day, despite all the flying bugs, the fish seemed more interested in what fishermen call nymphs: immature caddis and mayflies yet to emerge from the river. We drifted them under a bobber that dipped at the pull of a fish. Once my fly seemed to hook on the immovable bottom. Then it moved hard downstream and bent my rod.

"There is something heavy on there," I told Greg.

But then there wasn't. Whatever it was (a giant brown, I suspect) had bent my hook and got away. Those are the ones you remember, more than the other brown and rainbow and mountain whitefish we brought to net. Alas, we didn't see any of the last remaining native arctic grayling in the lower 48 that swim the Big Hole.

That day was enough to make a great trip, but I had plenty more adventures. Another day was spent on a creek called the Bloody Dick. Its lazy current wound through an open meadow that was a perfect spot for my nephew to practice his cast. It also gave up three dozen brook trout.

We spent time wading the Beaverhead and hunting wary trout on a tributary called Poindexter Slough. And since we could, we slipped down to Yellowstone, where the abundant snow offered an unexpected gift: the Firehole River, with its incomparable geysers and steaming banks, was still fishing. Normally, thermal springs make it too warm for trout by July.

In over my waist on the upper Madison one afternoon, I wondered whether I would have to risk deeper, faster water if a bear wandered down the bank. A few days earlier, a mother grizzly had killed a man in the park. Luck gave me a beautiful rainbow trout and no bears, but when we drove past the same section later, two grizzlies bumbled along the opposite bank.

The next day, my mother dropped me off for four hours of fishing on the Gibbon. A half-hour later, a storm came in and I took shelter under a skimpy tree as the temperature dropped 30 degrees, rain and hail pelted down and lightning struck nearby. A kind family that had driven from Maine gave me a ride out of the storm.

While in the area, we stayed 10 miles outside the touristy bustle of West Yellowstone at the Parade Rest Ranch, nestled in a stunning spot in the foothills of the Gallatin Mountains. We fished a little creek steps from our comfy cabin and rode horses through meadows of wildflowers.

On my last fishing day, I headed back to the Big Hole. I floated in a drift boat with a group of friends until the day's last light. This time, we caught fish on dry flies while the air was thick with caddis and the big drakes.

It was a fair day for bounty. For beauty it was close to perfection. The huge snowpack that had menaced my trip left the looming Pioneer Mountains capped white over the aspen trees that flickered in the breeze. Hawks and bald eagles flew overhead. Kingfishers strafed the water, stealing bugs from the trout.

As we cast to rising rainbows, I asked my friend Will Casella whether he knew a prettier trout river. Though he has guided and fished around the world from Russia to Mongolia to New Zealand, he was stumped.

My old teacher Dusty, it turned out, was half-wrong. But all the extra water draining down from the mountains will also make him half-right: The rivers will fish well this year long into the autumn.

September will certainly be epic.

The season runs through early November. The most popular spots include Twin Bridges, Dillon and Ennis, with access to the Big Hole, Beaverhead, Ruby, Jefferson and Madison rivers.

• The Stonefly Inn in Twin Bridges offers fly fishing information for the area on its website: http://bit.ly/n0DYLA

The nearest airport is Bozeman. Cheaper flights may be available to Denver, about 500 miles or a day's drive away. Yellowstone National Park is about two hours by car from Twin Bridges.

Rates vary depending on type of accommodation, dates and whether meals, fishing and other activities are included, with online offers ranging from $88 a night at Rainbow Valley, to $186 per person, per night at Parade Rest Ranch for a minimum three-night stay, including three meals, fly fishing and horseback riding, to $1,675 per person for three nights, double occupancy at Healing Waters, including guided fishing.

• Phasmid, a fly fishing tailored car rental agency based in Bozeman equips four-wheel-drive rentals with gear and can help plan your trip: phasmidrentals.com

These plants are toxic for your dogs and cats

Free hotel breakfasts are getting bigger and better

While some travelers cringe at the thought of greasy sausages and bland eggs served at the free hotel breakfast buffet, others say free breakf…

The Highest Value Airline Rewards Program Surprised Us, Too

Airline reward programs offer a simple proposition: If you fly with our airline a bunch, you’ll get paid back in the form of miles or points t…

Are Resort Fees Ever Worth It?

The Andaz Maui at Wailea Resort, a Hyatt resort on 15 beachfront acres in Hawaii, is far more than a place to sleep. There are multiple pools,…

Why your dream European vacation is already booked solid

The bounceback of international travel in the post-pandemic landscape shows little signs of slowing.

The author's cousin, Evan Butler, fishes along the South Fork of the Madison River near West Yellowstone, Mont. The river gave up three dozen brook trout on this pristine day.

A visitor rides a mule through a meadow at Parade Rest Ranch, which nestles in the foothills of the Gallatin Mountains overlooking Hebgen Lake about 10 miles from the touristy bustle of West Yellowstone, Mont.

The author, Desmond Butler, pauses on the porch of a rental cabin at Parade Rest Ranch. He fished a little creek just steps away.