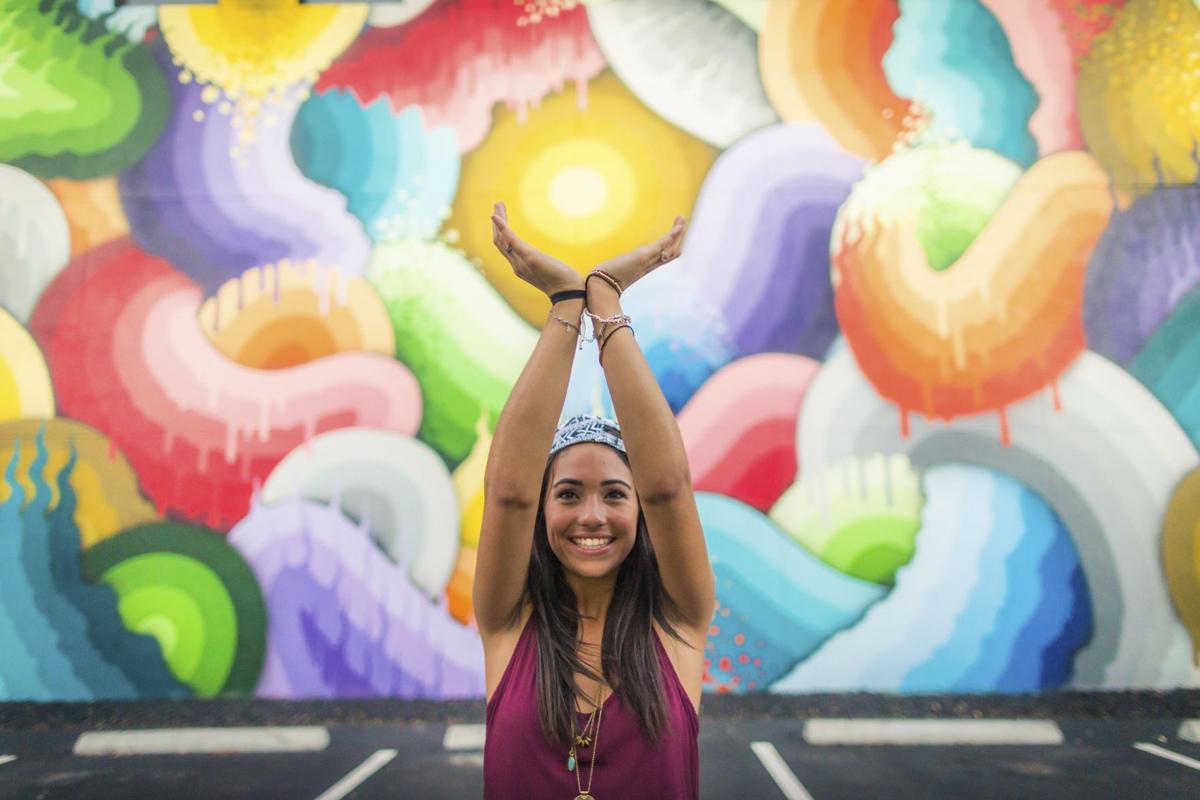 St. Petersburg's artistic side is evident in the city's catalog of 500-plus murals, including this one by Ricky Watts, called "Eye of the Storm," at 600 1st Avenue North. (VisitStPeteClearwater.com/TNS) 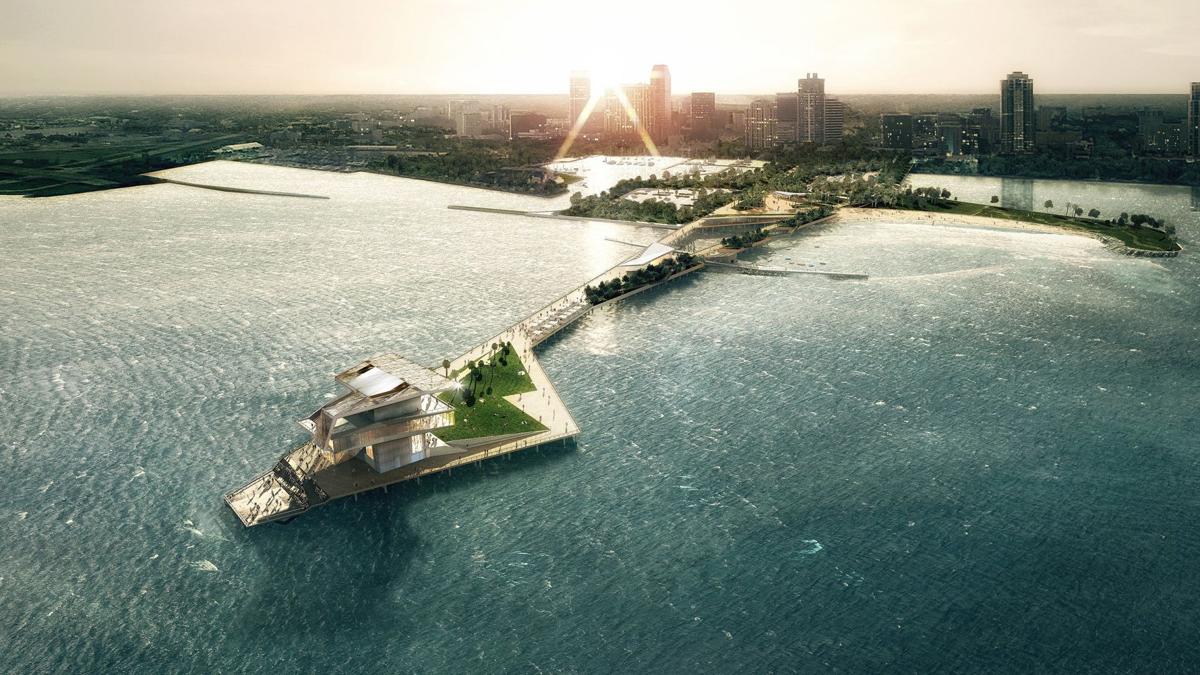 The 3,122-foot St. Pete Pier, shown here in a rendering, will multiple restaurants, a marketplace, a marine discovery center with an aquarium and lots of space for concerts, events and outdoor recreation. City officials say the $92 million project is expected to open in late spring. (St. Pete Pier/TNS) 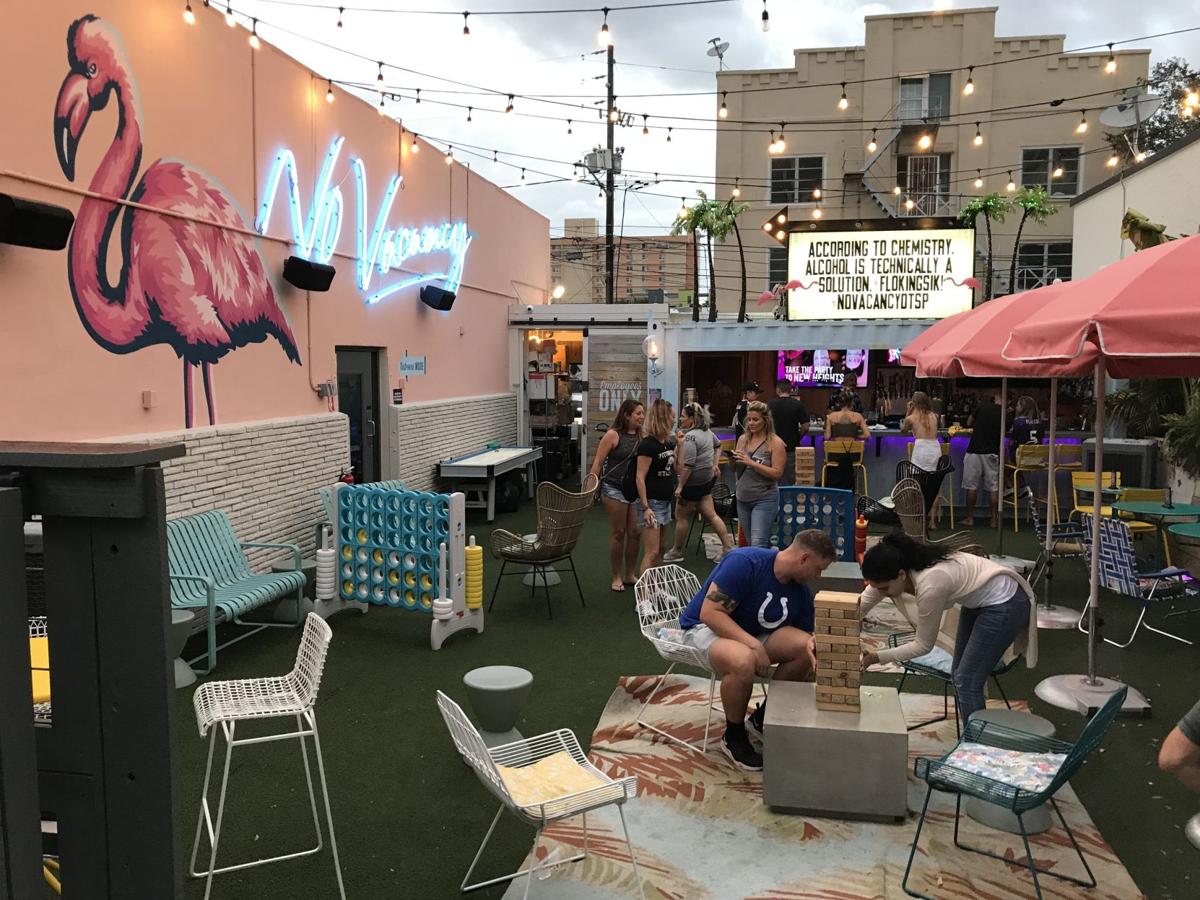 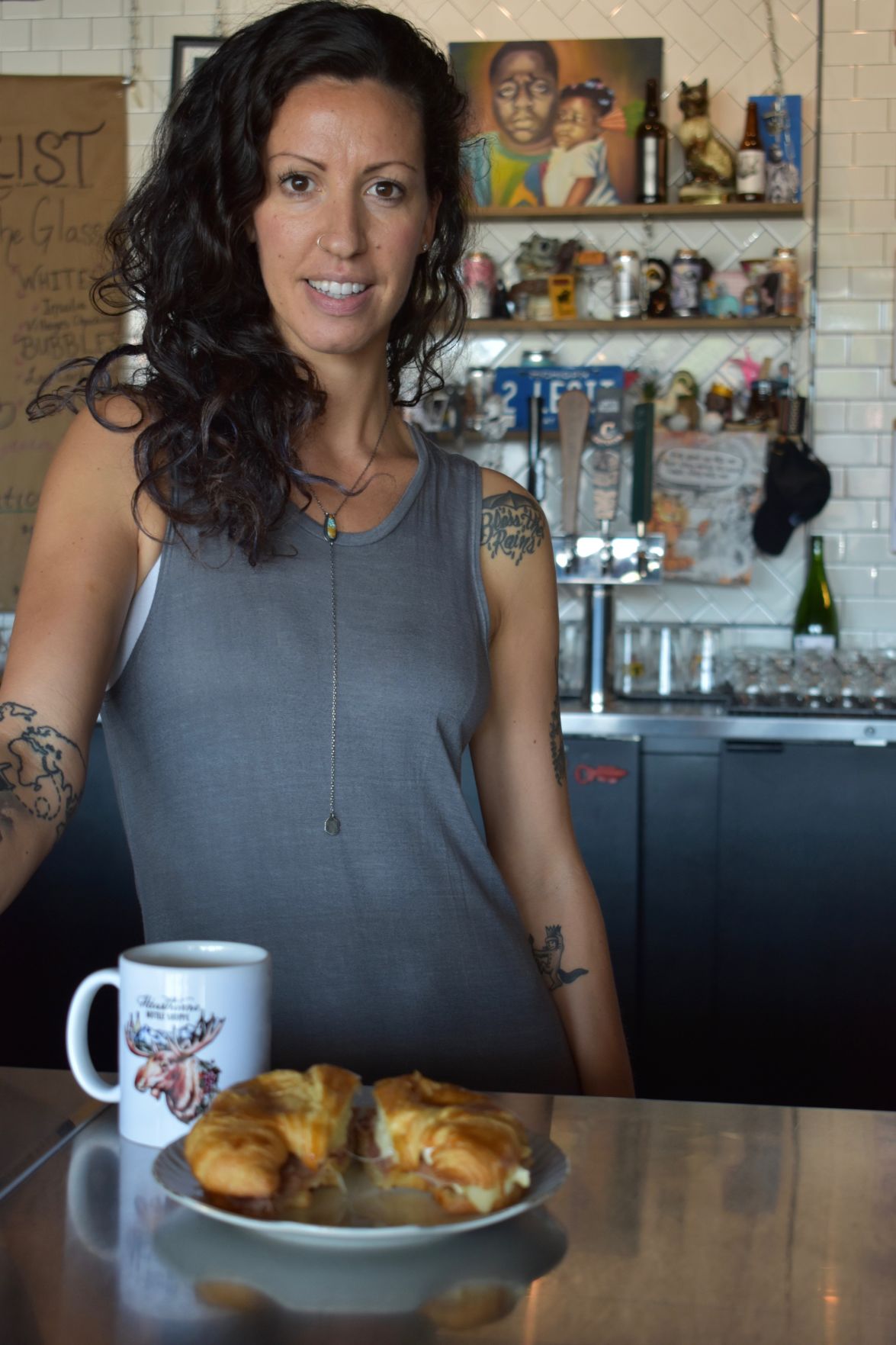 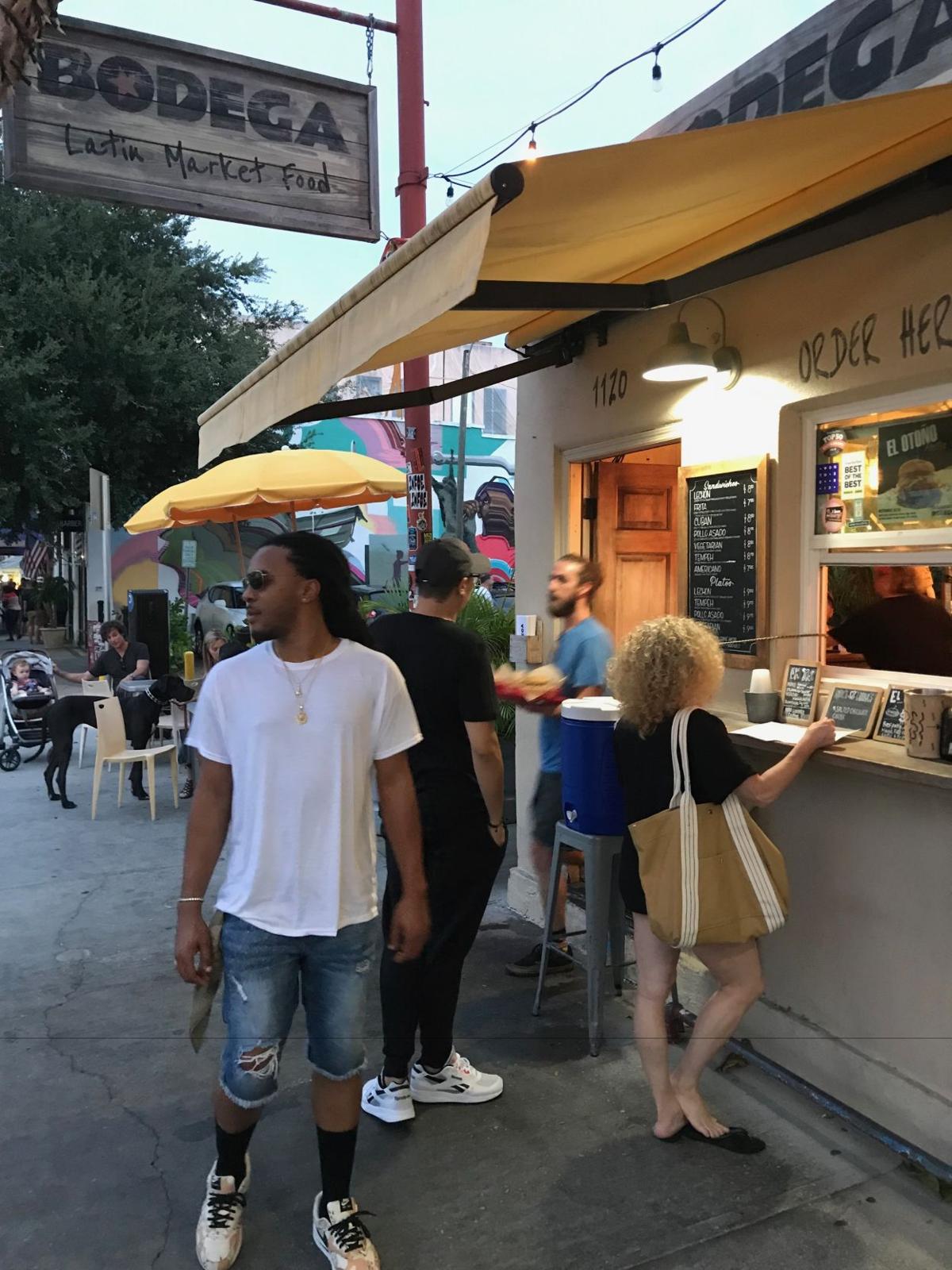 One of many popular eateries on Central Avenue, Bodega serves tasty Latin street food  the Cuban sandwich is a top seller  from its sidewalk spot at 1120 Central Ave. (Lori Rackl/Chicago Tribune/TNS) 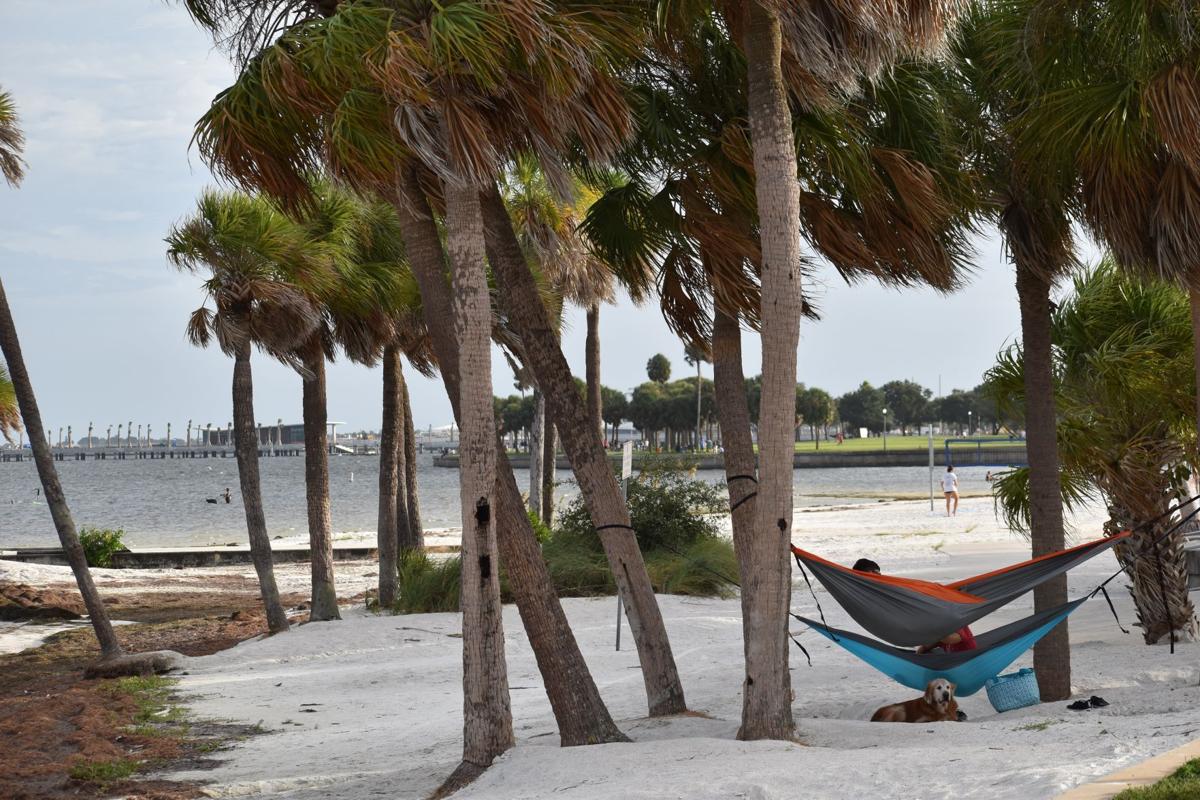 A squad of 20-somethings took turns pushing pucks down a shuffleboard court, giving each other congratulatory fist bumps and dipping into their cooler to fish out another can of White Claw.

A guy with tattoo sleeves dropped his skateboard on a patch of sand, hung a hammock between a pair of palm trees and gently swayed to the sounds of Tampa Bay.

In an alley, a few teenage girls armed with iPhones staged a photo shoot in front of one of the city's 500-plus murals.

And on what was once a desolate stretch of Central Avenue, the bar scene was bumpin'. Closer to downtown, diners at a vegan restaurant sat at sidewalk tables and tucked into their garden lasagna and falafel burgers.

This is not your grandfather's St. Petersburg.

Well, maybe it is. Plenty of gray-haired snowbirds call this peninsular city in west-central Florida home. Your grandpa might be one of them.

But there's no denying the Burg has undergone a reboot in recent years. A youthful energy is palpable. Artsy and hip, the city exudes a creative vibe and independent spirit - all the stuff that's landed St. Pete a seat at the cool kids' table, passing the hot sauce between Portland, Ore., and Austin, Texas.

"There certainly was a reputation for St. Pete being a sleepy, retirement, coastal community," said lifelong resident and Deputy Mayor Kanika Tomalin, adding that the population has been trending younger. The city's latest State of the Economy report notes a median age of 41.2 in 2018, compared to 48.1 in 1970.

Downtown revitalization has been chugging along for years, but it really took off in the last decade, Tomalin said, bringing a flurry of new bars, restaurants, condos and apartments along for the ride.

Pedestrians have returned to Central Avenue, the city's north-south dividing line where funky boutiques, craft breweries and hip cafes coexist with tattoo parlors and pawn shops held over from another era.

The action keeps spreading west on Central, much to the delight of Tegan Foster. The St. Pete transplant opened Hawthorne Bottle Shoppe at 2927 Central Ave. with co-owner Amanda King three years ago, when the location was more on the fringes. Their uber-chill bar that doubles as a wine and beer store is named after Hawthorne Boulevard, an eclectic street in Foster's hometown of Portland.

"There's definitely a bit of Portland in St. Pete," Foster said from behind the bar, where a shrine to late rapper Biggie Smalls hangs above the craft beer taps. "All of the small, locally owned businesses. The passionate, independent entrepreneurs. They're similar cities. But we're flat and hot."

St. Pete's arts and culture scene has had a growth spurt, too. Old favorites upgraded to fresh, new digs (hello, Dali - and the Chihuly Collection). Rookies joined the ranks, with 2018 welcoming new museums devoted to contemporary studio glass and Western and wildlife art. This summer, the massive Museum of the American Arts and Crafts Movement is slated to open.

"St. Pete is experiencing a renaissance like none in the history of the city," Tomalin said, citing a huge project that's literally on the not-so-distant horizon: St. Pete Pier.

Billed as the Southeast's largest waterfront playground, the $92 million development is supposed to debut in late spring. This latest iteration of the pier - St. Pete has had several, dating back to the late 1800s - casts a wide net, aiming to attract everyone from fishermen (and women) to foodies.

"The most significant difference with this pier compared to the others is we created an entire pier district that starts on Beach Drive, the preeminent corridor of our downtown, and runs 26 acres over the water and into the pier-head attractions," Tomalin said. "There are points of discovery all along the way."

St. Pete Pier will have a $1 million children's playground, a sandy beach, a marine discovery center with an aquarium, multiple restaurants and a rooftop bar serving Tiki cocktails along with sweeping views of Tampa Bay. A marketplace will act as an incubator for local businesses lacking a brick-and-mortar presence. Concerts and festivals will be held at the pier, which also will show off some high-profile public art, the biggest being a $1.4 million, 428-foot-wide aerial sculpture commissioned from Boston artist Janet Echelman, a Tampa Bay area native.

Tomalin expects St. Pete Pier to attract about 1.7 million visitors a year - 700,000 of them from out of town.

"It really is a game-changer," she said.

In the meantime, Sunshine City has plenty to keep tourists busy. Some of the country's best beaches are an easy drive away on a string of barrier islands along the Gulf Coast.

Back in town, you have museums, mural tours and Major League Baseball at Tropicana Field. Another entry under the letter M: market. From 9 a.m. to 2 p.m. Saturdays, October through May, roughly 10,000 people turn out for the St. Petersburg Saturday Morning Market.

Started in 2002 with a few booths on a city street, the market kept growing, eventually moving to its current spot in downtown's Al Lang Stadium parking lot. The market feels more like a festival, with live music and lots of ready-to-eat fare representing food from more than 15 countries. Farmers, makers, artists and others fill the 130 highly coveted vendor booths.

"We've turned down over 1,400 applications; that's how selective we are," market director Mark Johnson said. "We cherry pick somewhere between 5 and 10% to join us each year."

Another St. Pete specialty: shuffleboard. The city boasts the longest-running and largest shuffleboard club in the world.

The St. Pete club was on the verge of extinction when leaders decided in 2005 to open play to nonmembers on Friday nights. Now it's a BYOB hotspot, with newbies and veterans alike borrowing the club's equipment to compete on 74 courts from 7 to 10 p.m. Fridays. Admission is free; a $2 donation is suggested. The public also can play from 6 to 9 p.m. Tuesdays and Thursdays for $5 per person.

Or spring for a membership and play whenever you want.

"It's $40 a year," executive director Christine Page said. "We just raised it."

St. Petersburg's artistic side is evident in the city's catalog of 500-plus murals, including this one by Ricky Watts, called "Eye of the Storm," at 600 1st Avenue North. (VisitStPeteClearwater.com/TNS)

The 3,122-foot St. Pete Pier, shown here in a rendering, will multiple restaurants, a marketplace, a marine discovery center with an aquarium and lots of space for concerts, events and outdoor recreation. City officials say the $92 million project is expected to open in late spring. (St. Pete Pier/TNS)

One of many popular eateries on Central Avenue, Bodega serves tasty Latin street food  the Cuban sandwich is a top seller  from its sidewalk spot at 1120 Central Ave. (Lori Rackl/Chicago Tribune/TNS)