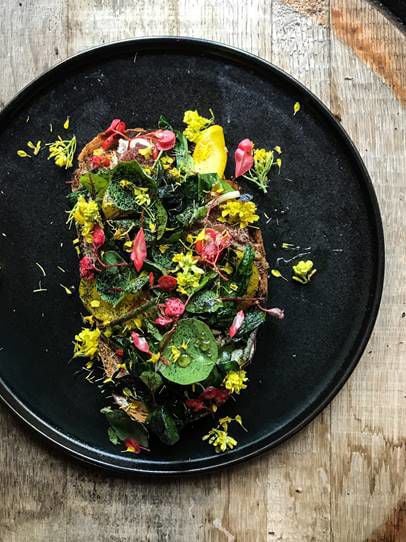 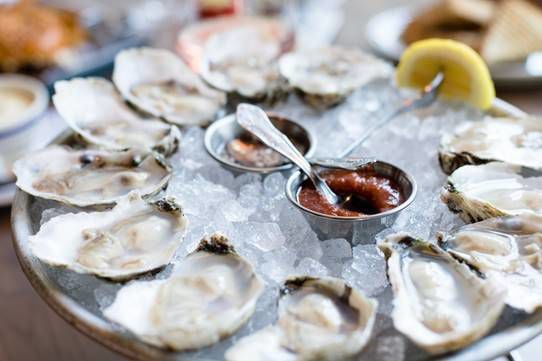 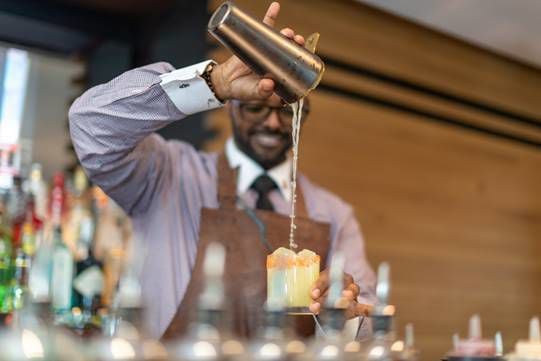 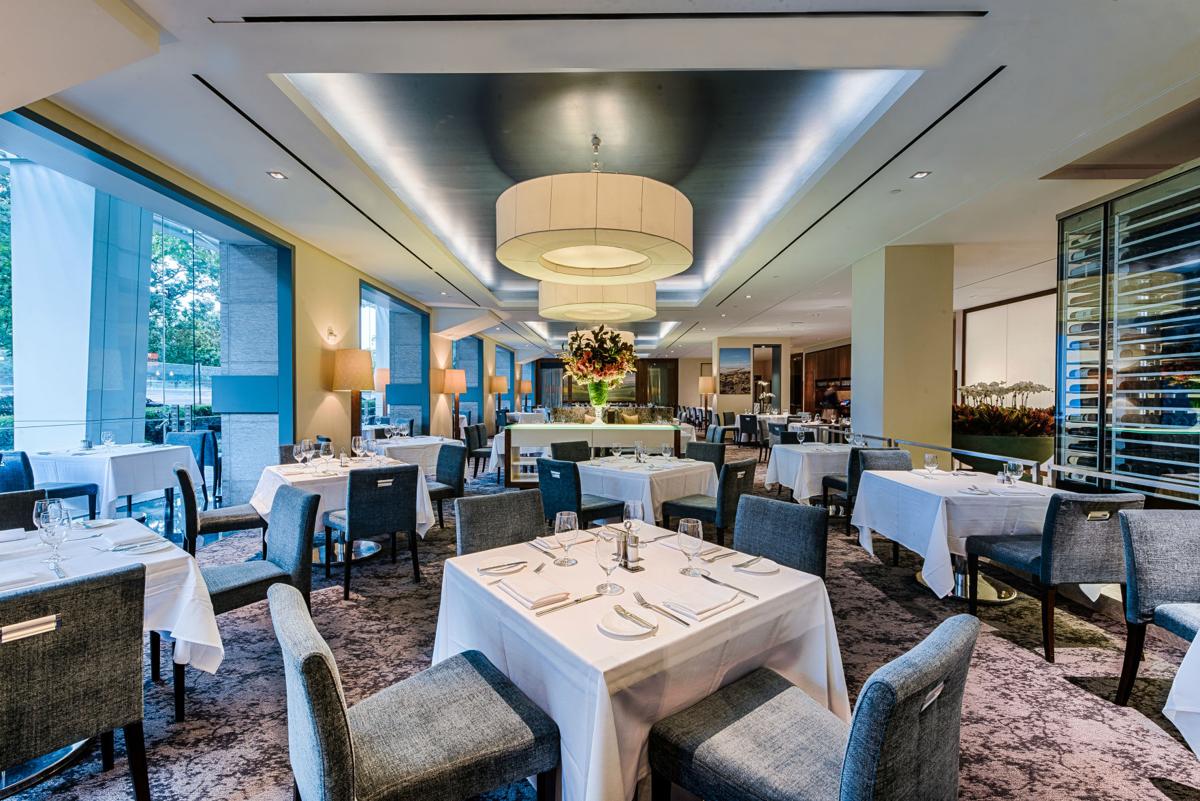 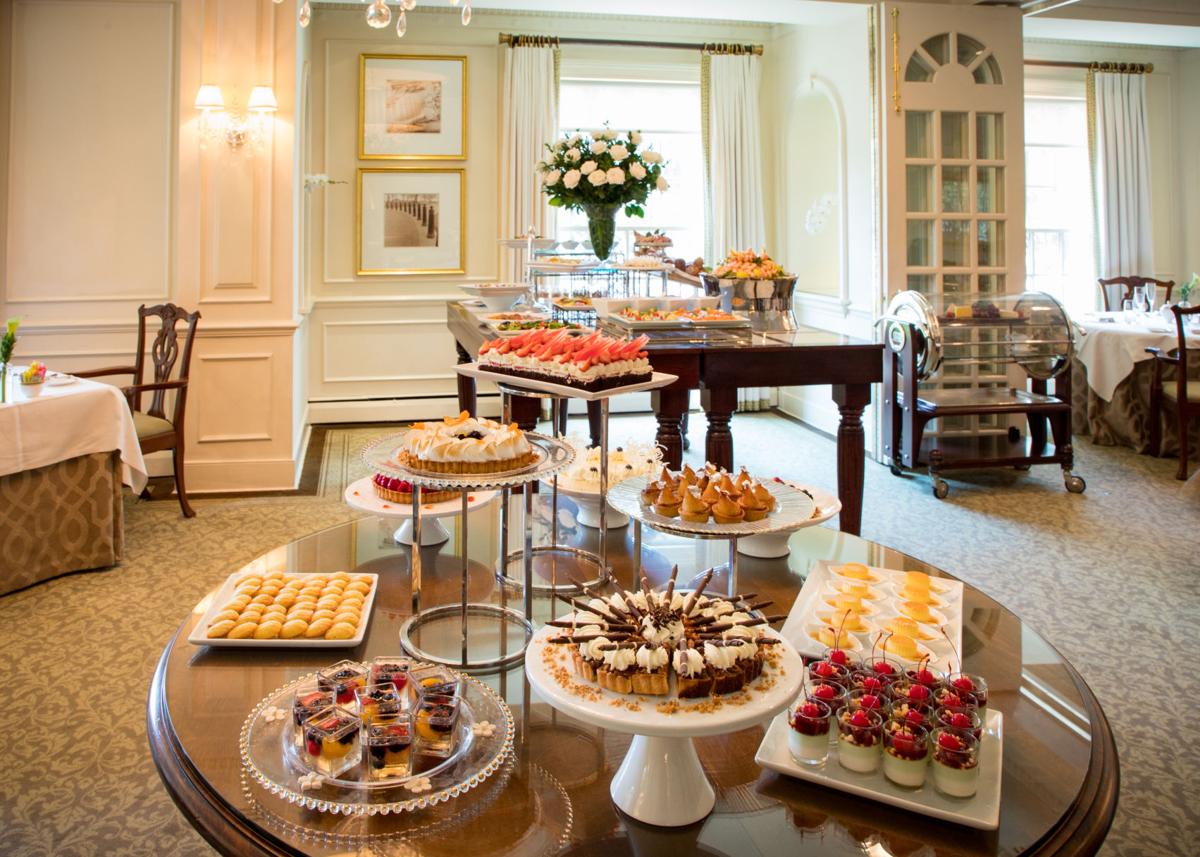 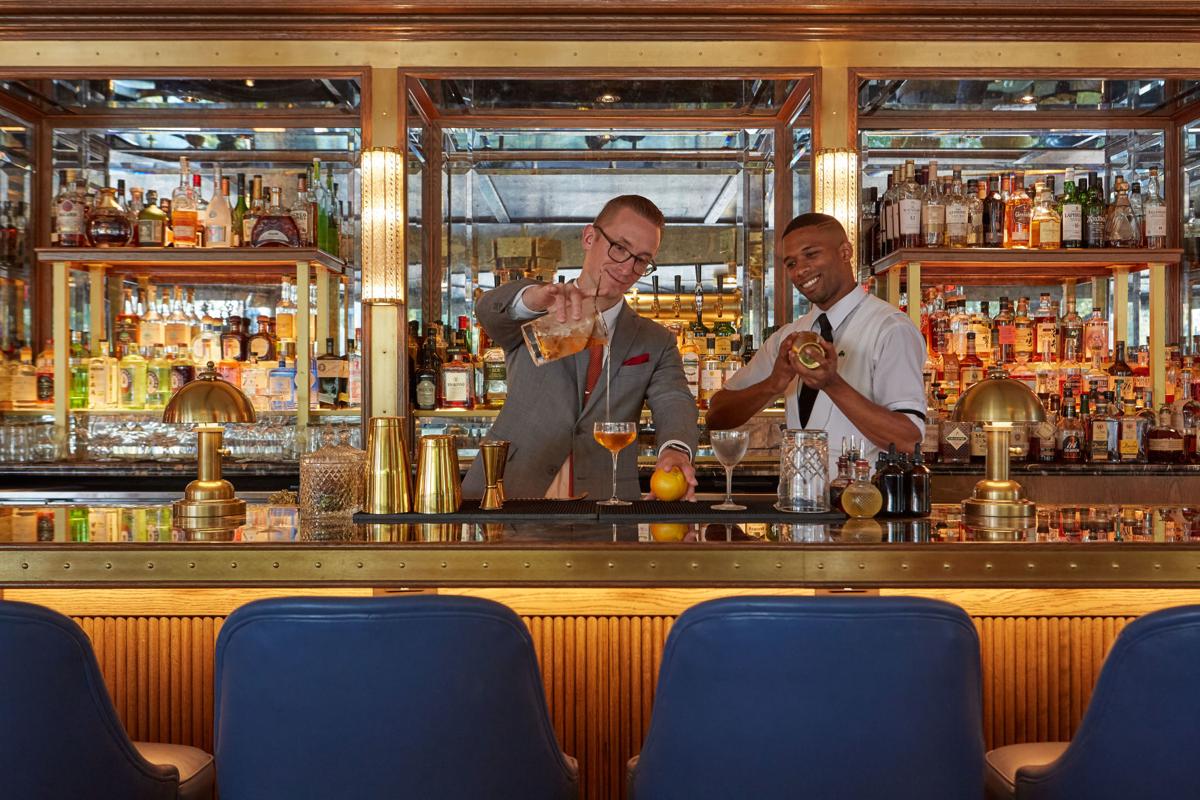 WASHINGTON - Much attention has been focused on Washington in recent weeks as the impeachment hearings have played out. The president may have been impeached, but there is one unimpeachable fact regarding our nation's capital. It has developed quite the reputation for world-class cuisine. From sizzling steaks to spicy Afghan kebobs, Washington has it covered.

I found out for myself on a recent visit dedicated to eating (with a few sightseeing jaunts to work off the calories.) Making my base the newly refurbished Dupont Circle Hotel (part of the Doyle Collection, which also has properties in London and Dublin), I found it ideally situated for exploring all the nation's capital has to offer.

The renovation has given the hotel a touch of class befitting its location in the Embassy Row area. In addition to a stunning lobby and well-designed guest rooms, it has a fine dining restaurant, The Pembroke, described as "cut from a different cloth" by Washington Post food critic Tom Sietsema.

I don't know what kind of cloth he was referring to, but my dinner of red snapper with forbidden rice, red curry and coconut veloute accompanied by whole Boston lettuce with Dijon vinaigrette and grilled asparagus with lemon chili exemplified chef Harper McClure's farm-to-table fare tinged with global influences.

While I liked the restaurant, I was enchanted by the bar, a throwback to the classic cocktail lounge of the 1940s and 50s with dim lighting, discreet seating and soft music that provides a backdrop for conversation rather than drowning it out with ear-shattering music as so many of today's bars do.

With atmosphere to spare plus classic cocktails (you can even sign up for a mixology class with the bartenders), it's no wonder the Pembroke has become a sort of clubhouse for the Dupont Circle set.

Washington is no stranger to a cocktail culture. After all, it was Kentuckian Henry Clay who introduced the mint julep to the barkeep at the venerable Willard Hotel two centuries ago (they still use his recipe today), but it was another hotel that provided me with a unique experience.

The Watergate in Foggy Bottom is infamous for being the site of the scandal that led to the resignation (before he could be impeached) of President Richard Nixon. If no one is occupying Room 214 - aka the Scandal Room - curious visitors can get a peek at where G. Gordon Liddy and E. Howard Hunt orchestrated the break-in at Democratic National headquarters, then located next door to the hotel.

There's nothing scandalous about the craft cocktails expertly presented by head mixologist Kal Lemma in the hotel's Kingbird bar. Kal, a native of Ethiopia, is nothing short of an alchemist when it comes to turning unusual ingredients into a perfectly mixed cocktail and then pairing it with dishes from the kitchen.

No doubt if they had downed a few of these, Liddy and Hunt would have been unable to focus on masterminding the break-in.

It's romantic to think of the corridors of power being dark, dingy back rooms in shadowy buildings, but in truth, perhaps more of the nation's business is conducted in trendy restaurants than in Senate and House chambers.

The place for a power lunch in D.C. is Charlie Palmer Steak on Constitution Avenue. With its proximity to the Capitol, it's known as "Congress' dining room." Legislators sit around the central fountain and nosh on jumbo shrimp cocktails, Jerusalem artichoke bisque, grilled Spanish octopus with avocado puree, and of course, the signature steak cuts. If their expense accounts are sufficiently large, there's the 44 Farms Bone-on Ribeye ($66) with a choice of five sauces,

Another power dining spot is the Lafayette Restaurant at the Hay-Adams Hotel, where select tables offer a framed view of the White House from the windows. Subdued and elegant in decor, the menu perfectly complements the setting.

Known for their Sunday brunch, I found it lived up to the hype. Over a glass of chilled Taittinger Brut champagne, I pondered a menu that featured dishes such as Lobster Omelet with White Beech and Shiitake Mushrooms; Crab Cake Benedict with Tarragon Hollandaise; Brioche French Toast with Cinnamon & Brown Sugar Caramelized Pears and Toasted Almonds and Ricotta Pancakes with Lemon Mascarpone, Toasted Almonds and Fresh Berries.

In the end, the pancakes won, and they were so filling that to my disappointment, I wasn't able to indulge in the very indulgent dessert cart.

Don't presume you need a coat and tie (and a Secret Service agent) to fully experience some of D.C.'s best eating. There's plenty of lip-smackingly good spots that cater to John Q. Public. One of the best is The Salt Line right on the Potomac riverfront within walking distance of Nationals Park, home of the 2019 World Series champs.

The experience here is that of a New England seafood house influenced by the bounty of the Chesapeake. That means hearty clam chowder; coddies (salt cod and Yukon Gold potatoes with yellow mustard and crackers); Johnny Cake (honey butter, smoked whitefish salad and marinated salmon roe), and for the really hungry, a Waterman's Platter featuring fried fish, oysters, shrimp and scallops accompanied by fries, onion rings and cole slaw.

The raw bar is epic, with seafood towers constructed from oysters, clams, lobster, crab, shrimp and a seafood charcuterie of the chef's daily specialties. If there are two of you, the Kraken, priced at $100, should suffice. If there are more, you'll have to shell out $155 for the Leviathan.

For a completely different experience, make your way to the Adams Morgan District for lunch at Lapis Afghani Restaurant. Always packed with lively locals looking for a reasonably priced ethnic meal, you may have to wait for a table and it may be tightly squeezed into a corner when you do get one, but believe me, it's worth it.

Some may find the decor a bit kitschy, but I found it charming with colorful Oriental rugs and brass fixtures. It feels as if you're in a modest home, which in a sense you are. The owners were forced to flee Afghanistan four decades ago after the Soviet invasion, leaving behind all their possessions. Lapis feels like their American home.

I started with Aushak, afghan dumplings stuffed with leeks and topped with ground beef, yellow split peas and strained garlic yogurt. From their dessert menu - cleverly labeled Sweetistan - I chose the pancakes with rosewater, cardamom and pistachios and drizzled with warm rosewater syrup. This was so good that - had I been in town another day - I likely would have gone back.

Finally, if you're looking for the perfect spot for a nightcap (and maybe some tasty noshes to go with it), check out the bar at Bourbon Steak in the Four Seasons Hotel in Georgetown. With its stylish decor - I loved the glass bubbles in the courtyard designed for intimate dining; 24 different cuts of prime beef and celebrity diners (it was a favorite of the Obamas), it's no wonder this is a coveted ticket to come by - as well as an expensive one. As the name would suggest, one thing that's sure to appeal is its impressive list of bourbons.

FOR IN BETWEEN MEALS

While you could fill up an entire weekend in Washington treating your taste buds, if you want to work off some of those calories and get a little culture in the bargain, here are three suggestions:

- National Geographic Museum. Dedicated to looking at the world through an anthropological lens, the museum, like the magazine that inspired it, gives us a better understanding of the planet we live on. Exhibitions are first rate. Women: A Century of Change (running through spring of 2020) displays stunning photographs of women in every part of the world by (mostly) female photographers.

Examining women's lifestyles across world cultures, the photos range from exhilarating (women racers in Alaska's Iditarod) to humorous (a 1940s cowgirl in El Paso, Texas, depositing a nickel in a meter to hitch up her pony) to politically provocative ( a woman having her head shaved on the steps of the West Virginia Capitol to protest mountaintop removal.) www.nationalgeographic.org

- The Phillips Collection. A short walk from the Dupont Circle Hotel, the museum, founded in 1921, occupies a beautiful Victorian-style building and offers a modern art collection in an intimate setting. There are paintings by Renoir and Rothko, Georgia O'Keefe and James McNeill Whistler, Gustave Courbet and Claude Monet as well as a respectable decorative arts collection. On select Sundays the museum hosts classical music concerts in one of the galleries. www.phillipscollection.org

Couple sought to be summer caretakers on Irish island

Great Blasket, on Europe's Atlantic fringes, is seeking a couple to become summer caretakers and sole full-time residents of the unoccupied island.

Singapore and Switzerland, islands in the storm

This past summer, seeking some sanity, I flew to Singapore and from there to Switzerland. I struggle to think of any other two countries where the citizenry is as contented. In my imagination, the two countries meld into a single entity: Swissapore.

Think your profanity-laced T-shirt would be fun to wear on your next cruise? Carnival Cruise Line says no.

Americans have mixed feelings about travel and climate change

Many people love to travel. Many people also have concerns about climate change.

Contemplating the growth of spiritual tourism at a peaceful, if sometimes odd, Santa Fe resort

Before flying to my Santa Fe, N.M., resort, I received a list of at least 20 activities available during my stay. Yoga Nidra. Zen Qi Flow. Sound Healing Journey. Meditation in Motion. Temazcal Sweat Lodge. Petroglyph Art Hike. Awakening the Elements Within. Chicken Chats. I circled the boxes for hiking, chi gong, visual arts - and put a question mark next to chicken chats. I was laying the ...

Norfolk's varied virtues are sure to enchant

NORFOLK, Va. - The expression on my face must have shown my sheer frustration. I had been waiting half an hour for Fred - make that F.R.E.D. (Free Ride Every Day.) This eco-friendly taxi comes equipped with battery power and solar roof and is available on request for those in need of a ride to a specific Norfolk destination. As luck would have it, I needed F.R.E.D. on the day it was scheduled ...

Travel solutions: Is there an exception if she missed her luggage claim deadline?

I recently flew from Iowa City, Iowa, to Providence, Rhode Island, on Delta Air Lines. While we were on a stopover in Detroit, the luggage han…

You go to select a seat for your flight. Everything's taken — except the upgrades. Now what?

LOS ANGELES - My husband, Joe, and I went to Chicago at Christmas to visit my family. Often, you can fly round-trip from Los Angeles International Airport to O'Hare International Airport for about $250 to $300, but the price goes up by at least a couple of hundred dollars closer to Christmas. We found a $499 fare on United in October and bought tickets. We could choose our seats on the ...