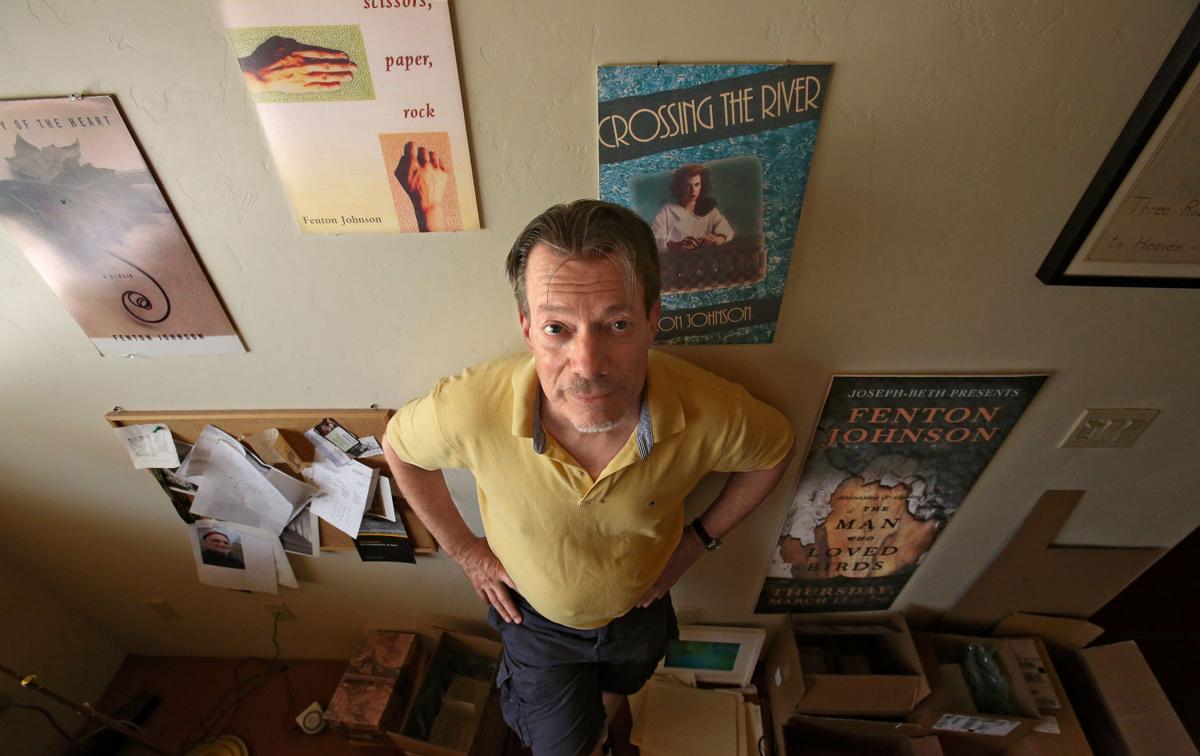 Several book covers from Kentucky-born author Fenton Johnson adorn a wall at his Tucson home. Johnson is an associate creative writing professor at the University of Arizona. 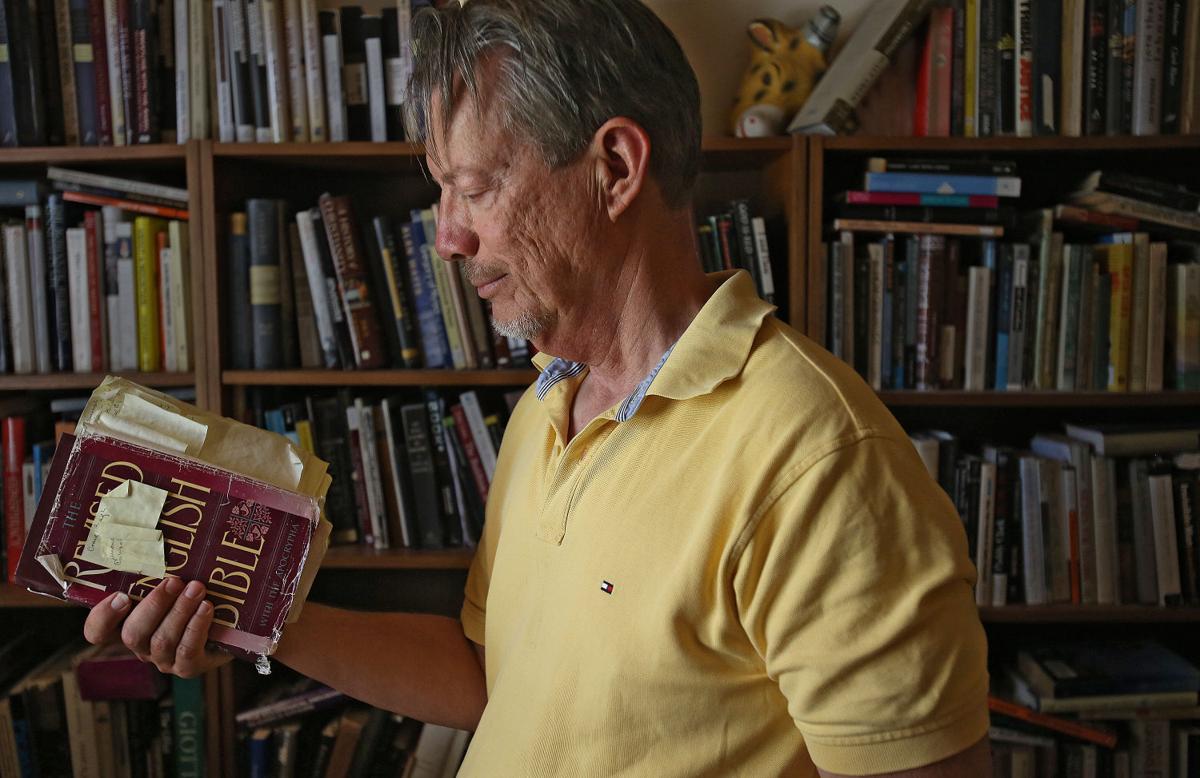 Fenton Johnson uses the Bible as a reference and says the principal character in his most recent book, “The Man Who Loved Birds,” is based on Jesus. 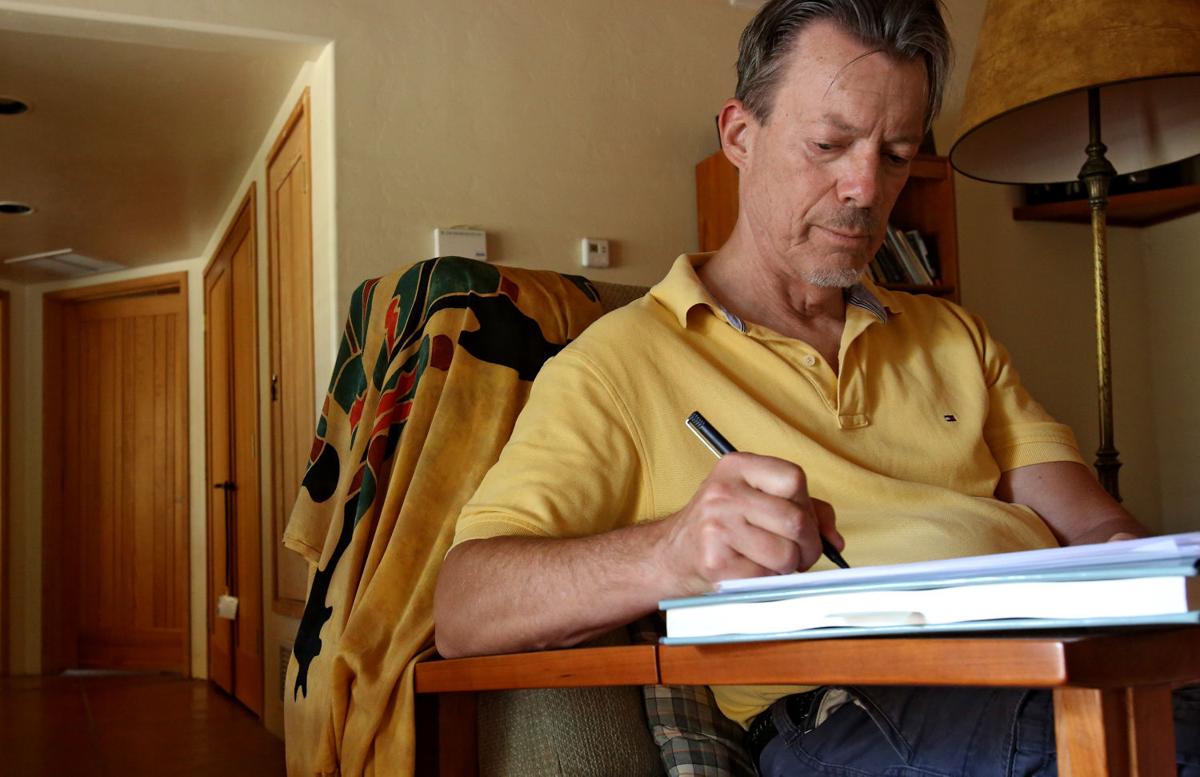 When he gets serious about his writing, Kentucky-born author and teacher Fenton Johnson breaks out a pen and paper and writes in long hand in his Tucson home on June 29, 2016. His most recent book is called, "The Man Who Loved Birds." 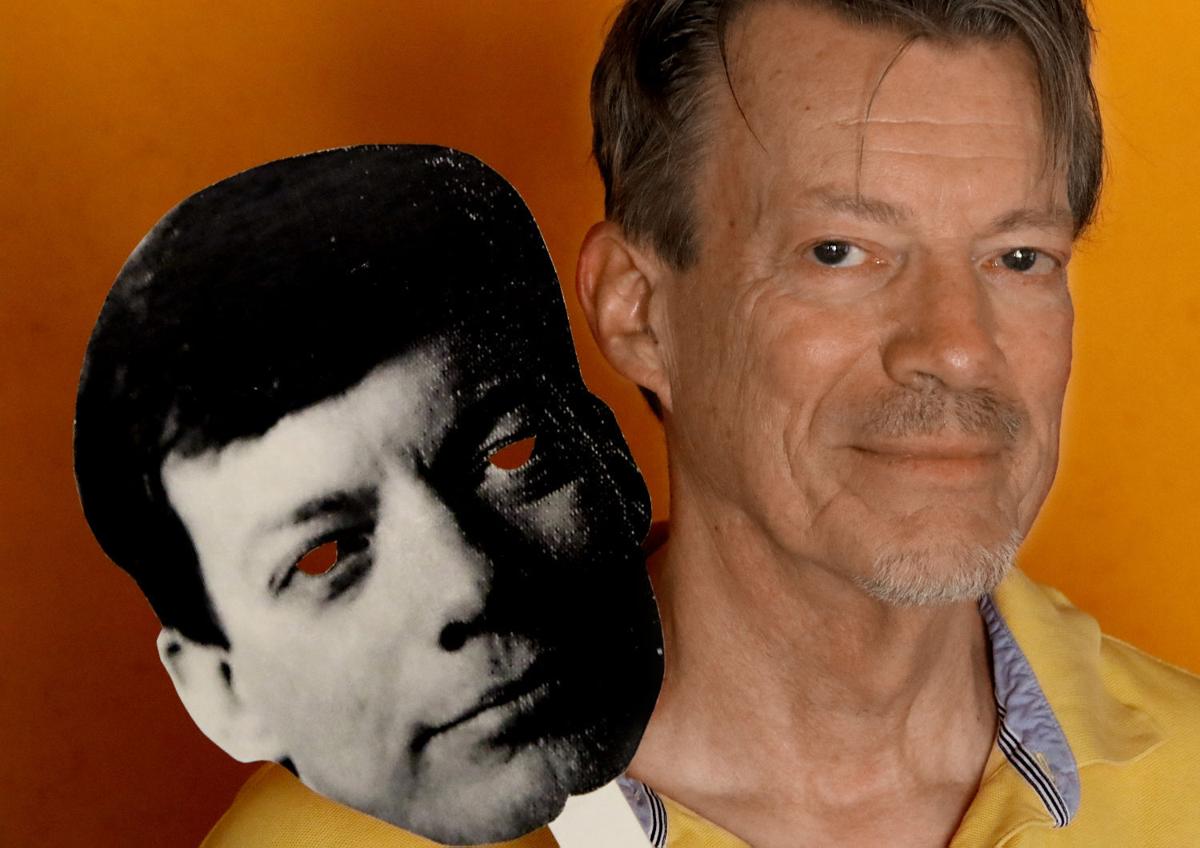 Fenton Johnson holds an image of himself from his novel “Crossing the River,” which introduced themes he would continue to explore: the struggle to reconcile religious and cultural differences.

By Christine Wald-Hopkins Special to the Arizona Daily Star

It was mid-May, and the courtyard in Fenton Johnson’s midtown Territorial was getting warm. Pouring a couple of grapefruit spritzers, and offering one to a visitor, he admitted to feeling slightly “frazzled.”

An associate creative writing professor at the University of Arizona, he had just finished the semester and was about to leave town for a month.

The semester had been rewarding but hectic for Johnson. In addition to teaching an advanced fiction class and a contemplative literature course he’d designed, he’d had three novels released, and he had two essay collections to prepare for publication.

Johnson, who’s racked up a slew of awards for his work over the years, gestured toward a thick manuscript on a coffee table.

“The working title of that collection of essays,” he said, “is ‘Everywhere Home.’ We were going to subtitle it New and Selected Essays,” but he was leaning toward “A Life in Essays or Autobiography in Essays.”

It may be,” he continued, “that I’ve been writing one long book my entire life.”

Home in the “Knobs,” faith reconciliation

Johnson was born the ninth of nine children in the rural “Knobs” region of central Kentucky. “There was a lot of drama,” he says of his childhood, “but one of the benefits of being the youngest is there were no expectations put on me.” In the family spirits-distribution tradition, his father worked for a local whiskey distillery. His mother, who attended college briefly, pushed college education for her children. She also pushed books and charm. The last “didn’t take very well on the other three boys,” Johnson says, but Southern charm has stood him in good stead.

His Protestant mother’s marrying a traditional Catholic laid the foundation for his first novel, “Crossing the River” (1989). It also introduced a theme he would continue to explore — the struggle to reconcile religious and cultural differences. The novel’s feisty Martha Bragg Picket flouts her family’s Baptist strictures only to find herself mired in her husband’s patriarchal ones. Martha’s ultimate rebellion is reflected in the attitude and actions of her son Michael Miracle, who escapes the Knobs at the end of the book.

Johnson himself escaped the Knobs to attend university when he was 17. Anxious to leave behind the conservatism and racism of Kentucky, he set his sights as far west as he could go — to California with its reputed tolerance and “magic and sense of allure.” But his family had no experience in higher education and hadn’t even heard of Stanford University when he applied to it. In fact, the sister who recommended it thought the name “Leland Stanford Junior University” meant it was a two-year college.

To say Johnson suffered culture shock at Stanford is an understatement. “It was shameful,” Johnson says now, about his experience. “Stanford didn’t understand at all that class was an issue, but it’s interesting to compare it with today’s students, where it’s all about security.”

Other students mocked his accent — which Johnson would beat himself up to eradicate — and they were as flummoxed about his life as he was theirs (What? “Didn’t everyone have a father who made whiskey and monks who danced on the kitchen table?”)

It took Johnson an early year abroad in France and then a $1.80-an-hour summer job working in a sewing factory to convince him it was worthwhile finishing his degree. By that time, he didn’t care what the others thought.

There’s only faint Southern left in the accent of the urbane professor Johnson, but he says he still avoids referring to “steel mills.” Articulating those “two diphthongs in a row,” he says, constitutes more work than it’s worth.

and the AIDS epidemic

“Family” runs deeply through Johnson’s “one long book.” His award-winning 1992 novel “Scissors, Paper, Rock” and 1996 memoir “Geography of the Heart” address the nature of family—the one we’re born to and the one we choose.

They also deal with the AIDS epidemic of the ’80s, with memory, and with the nature of dying.

The central character in “Scissors, Paper, Rock,” goes home from San Francisco to the Kentucky Knobs ostensibly to assist his failing father, but also because he is suffering from AIDS. Johnson, who admits drawing liberally from family members to create characters, broadens “family” beyond blood relations in this book.

The nonfiction “Geography of the Heart” chronicles Johnson’s life in San Francisco with a partner dying from AIDS, and deals with family that’s chosen. Describing the devastating effects on his community as one friend after another dies, it is an affecting meditation on love, community, memory. At one point he writes of memory as his sixth sense—his “sense of the poignance of time passing.”

Johnson says he suspects the gay community is uneasy categorizing him as a gay writer because he doesn’t set his characters in exclusively same-sex environments. “I’ve always been interested in LGBT politics,” he says, but in fiction, he situates his gay characters in broader social contexts — “among a panoply, a range of characters” in “the whole range of human experience”

His Catholic/Protestant home experience led Johnson to examine other faith practices. In his 2003 memoir, “Keeping Faith: A Skeptic’s Journey,” he explores the notion of solitary spiritual practice by embedding himself with monks of two traditions—Buddhist and Christian. Entering a skeptic, he came away appreciative of both traditions, and resolved to practice both.

Asked how embracing those two practices has worked for him these 13 years later, Johnson pauses. He attends a liberal Episcopal church, he says, but he’s “the surly guy in the back” who avoids coffee hour. Like “those luke-warm people” Jesus refers to, he says, “who get spat out of the mouth because they can’t decide what to do,” he also meditates with a local Buddhist group. And about the Christianity/Buddhism conundrum:

“The stories are better.”

“The Man Who Loved Birds”

Johnson’s newest novel, “The Man Who Loved Birds” brings together issues of culture, faith and religion, duty and responsibility, and — most significantly — the “eternal struggle between love and the law,” with which Johnson says he has been grappling to some degree in all his writing.

The “Man” of the title is Johnny Faye — “No ‘mister’; just Johnny Faye” — a Vietnam vet and marijuana farmer at roguish odds with local law enforcement.

Johnson based Johnny Faye’s story on renowned Knobs renegade Charlie Stiles, who was killed by the state police he’d taunted. Johnny Faye, too, taunts. We first see him burying a golf cart on land slated to be turned into a golf course development. He hijacks a shipment of air conditioners and one mysteriously shows up in a sweltering doctor’s office. Over the course of the book, he teaches a Trappist monk how to play pool and skinny-dip, and a female doctor how to identify birds by their calls. And he loves both of them — as they do, him — along with his dog, the natural world of his Knobs, and his beloved birds.

However unlikely the occurrences of this book, they’re all based on real events, according to Johnson. A woman from Pakistan did come to the Knobs to practice medicine. Charlie Stiles did steal a shipment of air conditioners that showed up at the Sisters of Charity Hospital.

And the Trappist monk Johnny Faye teaches to play pool? Johnson’s family has had lifelong interactions with monks from a Trappist monastery three miles away. Some monks would need a place to light when they decided to go “over the wall” to leave the community. Some bought Johnson’s father’s whiskey for their fruitcakes; some were regular dinner guests; and Johnson himself was named after two of them. When monks came to dinner there was always plenty of good Kentucky bourbon, and when some after-dinner activities involved dancing on the table (sometimes in a grass skirt), they were often joined by Johnson’s mother.

You can’t make this stuff up. If you’re a writer, you’ve got to use it. “I am lucky,” Johnson says of this material. “It was given to me.”

And his family showing up in his fiction? “They’re proud of having a writer in the family,” he says, “even if I give them fits. Never — not once — have they told me not to write what I’m writing.”

Johnson planned to visit the Knobs during his month off. He could get to Basil’s pool, where real-life monks are no longer allowed to skinny-dip, and where fictional Brother Flavian learns to love. He will probably hang out with some family members whose stories haven’t yet showed up in his work. And he should relish the early summer “palette of every shade of green, from the gray-green of the sycamores lining the creeks and rivers to the chartreuse of the locust trees dripping long cones of honey-scented white blossoms to the emerald maples with their whirligig seeds.” (“The Man Who Loved Birds”)

Christine Wald-Hopkins is a book critic and former TUSD, PCC and UA writing teacher. Her work has appeared in the Arizona Daily Star, Tucson Weekly, Denver Post and BookStreet, USA.

Several book covers from Kentucky-born author Fenton Johnson adorn a wall at his Tucson home. Johnson is an associate creative writing professor at the University of Arizona.

Fenton Johnson uses the Bible as a reference and says the principal character in his most recent book, “The Man Who Loved Birds,” is based on Jesus.

When he gets serious about his writing, Kentucky-born author and teacher Fenton Johnson breaks out a pen and paper and writes in long hand in his Tucson home on June 29, 2016. His most recent book is called, "The Man Who Loved Birds."

Fenton Johnson holds an image of himself from his novel “Crossing the River,” which introduced themes he would continue to explore: the struggle to reconcile religious and cultural differences.