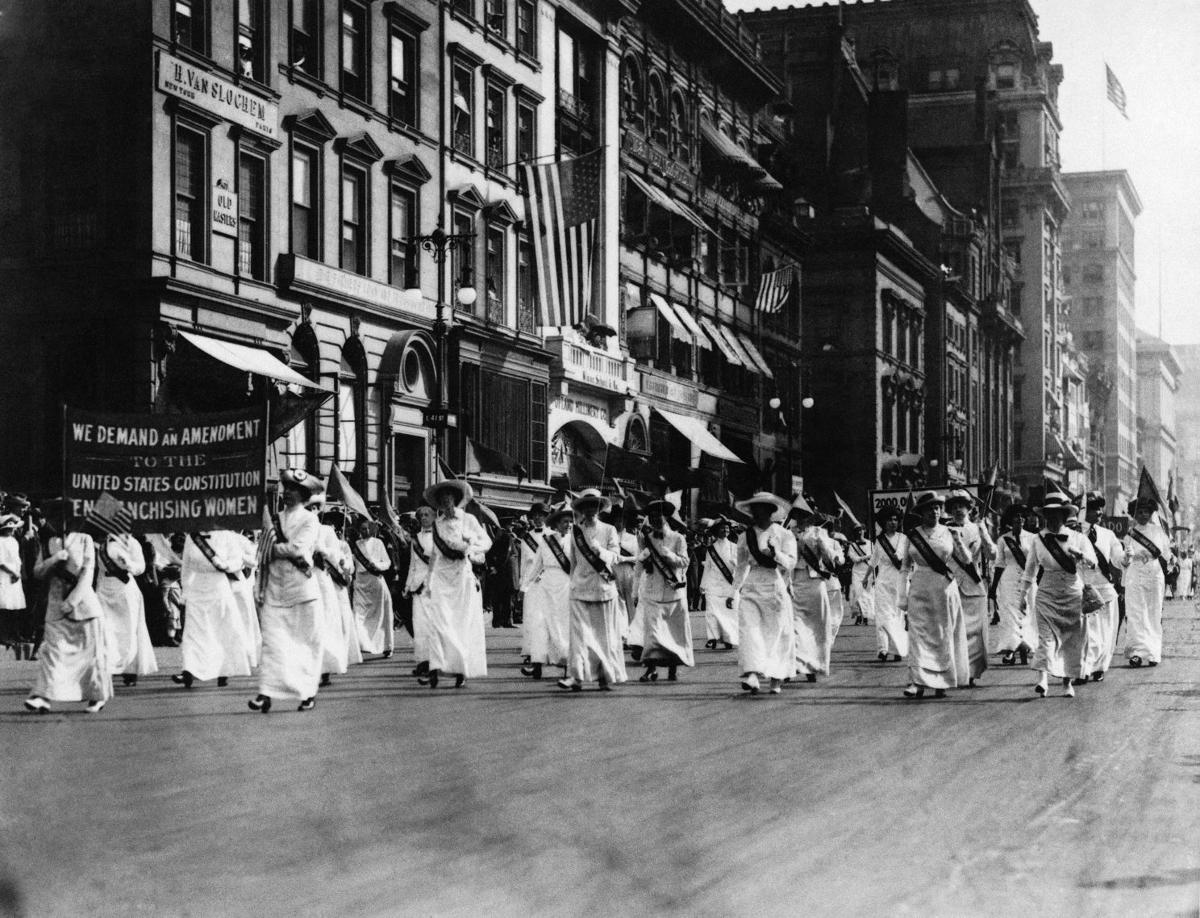 A women's suffrage parade is shown here in an undated photo. (AP Photo) 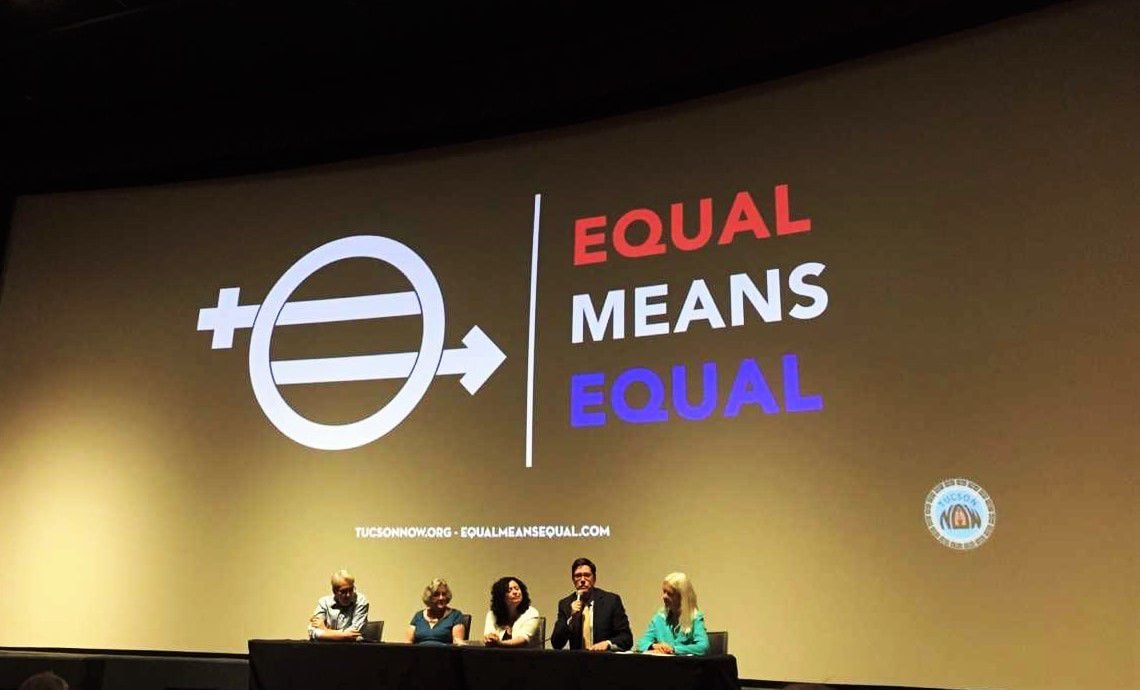 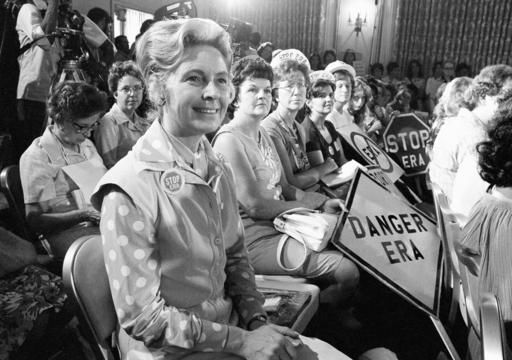 FILE — In this Aug. 10, 1976, file photo, women opposed to the Equal Rights Amendment sit with Phyllis Schlafly, left, national chairman of Stop ERA, at hearing of Republican platform subcommittee on human rights and responsibilities in a free society in Kansas City, Mo. Schlafly, who helped defeat the Equal Rights Amendment in the 1970s and founded the Eagle Forum political group, has died at age 92. The Eagle Forum announced her death in a statement Monday, Sept. 5, 2016. (AP Photo) 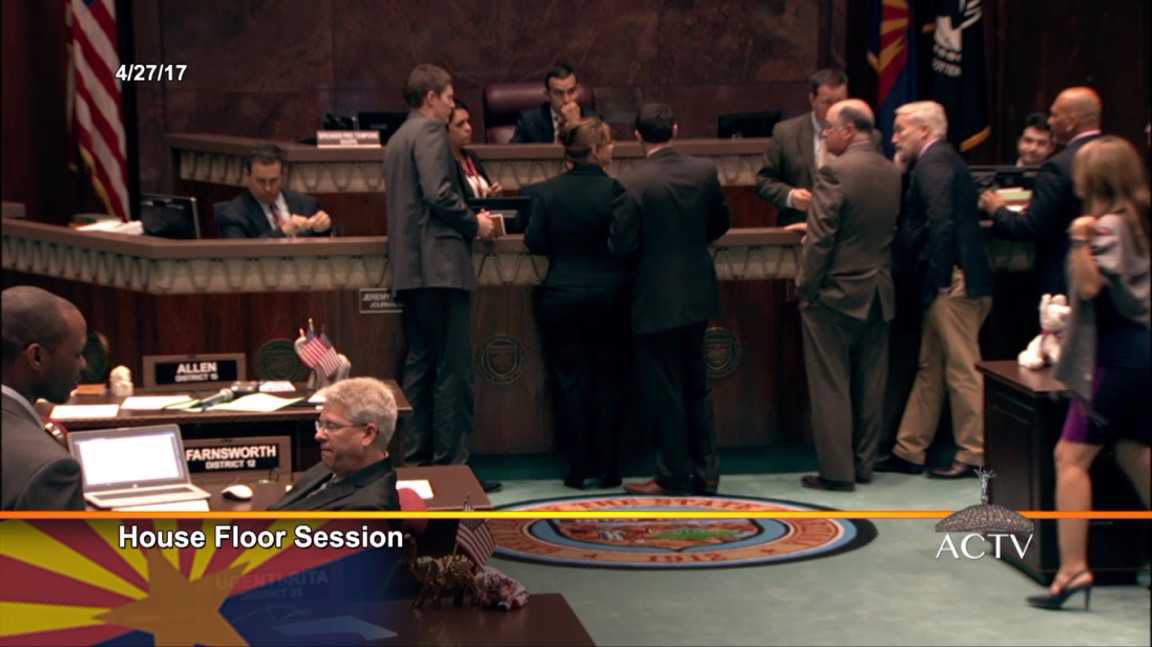 You probably didn't know that Arizona has a higher percentage of women in its state Legislature than any other state.

The appointment of Goodyear Democrat Geraldine Peten to the Arizona House of Representatives in August nudged the percentage of women in the state Legislature up to 40 percent, according to Rutgers University's Center for American Women and Politics.

Peten was appointed following the resignation of former Rep. Jesus Rubalcava due to controversy over his use of campaign-finance funds.

That high percentage has Rep. Pamela Powers Hannley, D-Tucson, hopeful that this Legislature might pass a bill to approve the Equal Rights Amendment, a proposed amendment to the U.S. Constitution that guarantees equal rights under the law to men and women. Supporters consider this a continuation of the women's suffrage movement.

In case you haven't heard of the decades-old ERA proposal, this is what it says:

"Section 1: Equality of rights under the law shall not be denied or abridged by the United States or by any state on account of sex.

"Section 2: The Congress shall have the power to enforce, by appropriate legislation, the provisions of this article.

"Section 3: This amendment shall take effect two years after the date of ratification."

Proponents such as Powers Hannley insist the amendment is necessary to eliminate the pay gap and would give courts a better frame of reference for dealing with cases of sex discrimination, among other things.

Powers Hannley and other supporters discussed the ERA after a showing of "Equal Means Equal" at The Loft Cinema Thursday night.

"It must be crystal clear. There can be no question that women are human and we are all equal," said Rep. Randy Friese, D-Tucson, Thursday night. "The push back is that it might already be (in the Constitution) ... so let's just put it there for sure, so there is no question."

Here's where Arizona comes in, and why, whether you agree or disagree on the necessity of the ERA, you should know what it is.

Give me some background:

The Equal Rights Amendment has been around in some form since a reworded version was proposed in 1923 as part of the 75th anniversary of the 1848 women's rights convention in Seneca Falls. In 1972, Congress passed the version you just read, giving it a seven-year deadline for ratification.

One of the ways for an amendment to officially become part of the Constitution is that three-fourths (38) of state legislatures have to ratify the proposed amendment. Thirty-five states did so by the 1979 deadline. Several states actually rescinded their support, and even when Congress voted to extend the deadline until 1982, no other state jumped on board.

That is, until Nevada made a move this March, 35 years after the deadline set by Congress.

With Nevada's ratification of the Equal Rights Amendment this year, supporters hope they can win two more states — the required 38 — and then push Congress to change the deadline again.

That's why Powers Hannley in the House and Democrats in the State Senate tried to get Arizona's Legislature to debate and vote on a bill ratifying the amendment this past April.

It's legislative lore that Sandra Day O'Connor, who served on the Supreme Court, supported the amendment during her tenure as a state senator, Steele says. In a 1974 form letter to constituents regarding the ERA, O'Connor expressed her support of equal rights under the law but acknowledged that the broad language of the amendment could cause legal issues. She suggested referring the amendment to Arizona citizens for an advisory vote.

That never happened, but you can read her letter here.

During this past legislative session, House and Senate Democrats planned to bring the amendment before their respective houses yet again. When the bill did not get a hearing in committee, Powers Hannley and her seatmate Rep. Friese decided to work a loophole.

Even though HCR 2012 was stopped in committee, Powers Hannley brought a bill to the floor, using the loophole, supporting the amendment. House Speaker J.D. Mesnard, R-Chandler, met that with a proposal to recess.

Cue the debate. Democrats advocated for equal pay for their daughters and granddaughters, Republicans cited the amendment's passed deadline and the need for the bill to go through proper legal proceedings (Powers Hannley already tried that).

The vote to recess (and not vote on the ERA) broke down party lines, with Republican representatives Heather Carter and Michelle Ugenti-Rita voting against the recess, Powers Hannley says.

Arizona has not voted on equal rights proposal approved by Congress in 1972.

A coordinated effort in the state Senate also failed.

"This deserves a full vote and a full debate," she says.

What do opponents say?

When the debate ensued, House Republicans cited concerns about the long-since gone deadline for ratification and the potential of greater intervention by the federal government, according to a report by Capitol Media Services.

Critics also point to existing laws such as Title VII of the Civil Rights Acts of 1964 and the 14th Amendment with its admonition that no state can "deny to any person within its jurisdiction the equal protection of the laws." Laws such as these, they say, do the job.

In the 1970s, Phyllis Schlafly, a conservative political activist and lawyer, campaigned aggressively against the ERA and the harm she believed it would do to family life and traditional gender roles.

She feared ratification would hurt women in areas such as divorce and alimony, and she saw wider reaching ramifications such as making women eligible for the draft and paving the way for same-sex marriage and increased abortion rights, according to the Eagle Forum, an organization Schlafly founded, originally called Stop ERA.

What do supporters say?

Today, supporters of the ERA rally around the battle cry of equal pay for equal work.

A report released in September by the United States Census Bureau noted a 1.1 percent increase in the "female-to-male earnings ratio," meaning women collectively earn 80.5 percent of what men receive, according to the report. Women of color make even less — and because of Tucson's significant Latina population, a pay bump could have a big impact here.

Supporters make the case that current legislation doesn't have the teeth to make substantial differences and point to statistics on pay differences, the prevalence of domestic abuse and rape and the constant unveiling of sexual harassment in the workplace.

Jami Parrish, the committee chair for the constitutional equality committee of the Tucson chapter of the National Organization for Women, says that history illustrates how the law can contradict reality.

"The 14th Amendment defines citizens, and you would think by definition it would apply, but women still weren't able to vote at that time," she says.

This takes us back to the beginning — Powers Hannley says the number of women in the state Legislature has the potential to change the conversation.

"A lot of those women are moms or grandmas and despite party affiliation, ran on a platform of helping family and education," she says.

Away from the state capital, activists are finding that many young women are unfamiliar with the ERA — a fact evident at the Loft Thursday when many in the crowd sported graying hair.

Ideally, Powers Hannley would like to see a Republican woman propose the bill next year. The high percentage of women also means that if enough Republican women get on board, a bill could pass without needing substantial support from Republican men.

"I think it will be a really good example of the power of women if we could pass it with Republican women and none of the good ole boys," she says. "I think that would send a powerful message."

This YWCA fundraiser brings together women chefs, bartenders and artists

Get ready for girls' night out.

Two University of Arizona organizations are hosting a local version of the worldwide protest SlutWalk on Thursday.