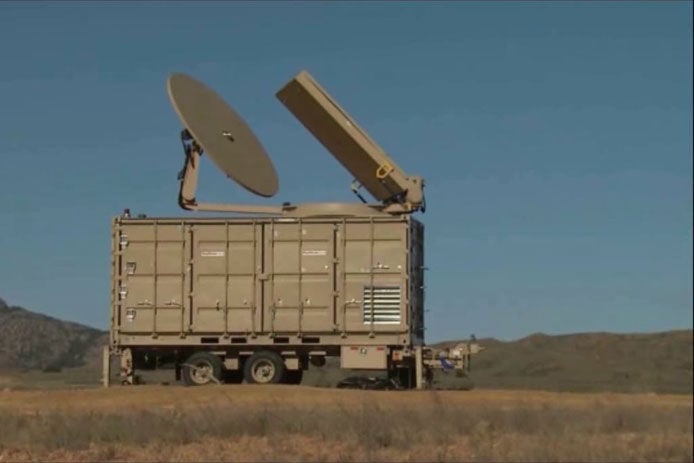 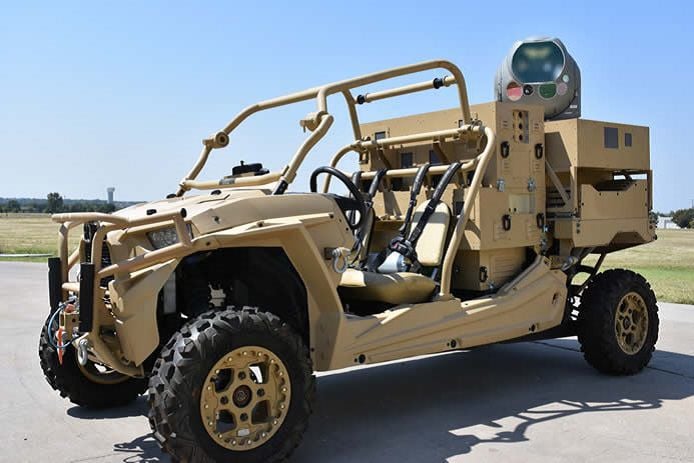 Raytheon’s laser dune buggy, which combines a sophisticated sensor package with a high-energy laser mounted on a Polaris MRZR vehicle, could bring down drone aircraft.

Raytheon is amping up development of its directed-energy weapon systems as the Pentagon looks to electromagnetic pulse devices and weaponized lasers to defeat drones and other airborne threats.

The defense contractor recently announced it scored 45 drone kills in an Army demonstration, using an advanced high-power microwave and a laser weapon mounted on an all-terrain vehicle.

The microwave system, made by a division of Tucson-based Raytheon Missile Systems based in Albuquerque, knocked down 33 small drones — two and three at a time — in a December test at the U.S. Army Fires Center of Excellence at Fort Sill, Oklahoma.

In the same test, a high-powered laser mounted on a Polaris MRZR ATV shot down 12 airborne, maneuvering small and medium-sized unmanned aircraft, and destroyed six stationary mortar projectiles. The laser system was developed by Texas-based Raytheon Space and Airborne Systems.

Raytheon announced the drone-downing demo last week at a conference of the Association of the U.S. Army in Huntsville, Alabama.

The high-powered microwave weapon is being developed by Raytheon Missile Systems’ facility in Albuquerque, where Raytheon arrived in 2011 when it acquired the directed-energy assets of Ktech Corp.

Susan Kelly, site director at what is now known as Raytheon Albuquerque, said the system uses existing radars and a variable-width beam to electronically disable drones in its path with a zap of high-powered microwave energy. The system also has an optical sensor to view and identify targets.

“Our beam width is very, very wide relative to lasers, and lasers have to dwell on a target for a number of seconds,” Kelly said. “We fire once or twice and everything within our path comes down.

“We’re capable against swarms instantaneously, instead of having to dwell on a single target and then move on to the next target, which takes time.”

During one scenario in the December test, Kelly said, the Raytheon microwave systems downed eight drones coming from different directions.

Raytheon’s microwave systems use far less energy than high-powered lasers, allowing the systems to be run on small generators or batteries, Kelly said.

Directed-energy weapons are much cheaper to use than firing off air-defense missiles costing tens of thousands of dollars and up.

““They’re very inexpensive, they have an unlimited magazine, so you can fire as many times as you have power to the system,” Kelly said.

Raytheon and the U.S. Air Force Research Laboratory at Kirtland Air Force Base in Albuquerque worked under a $2 million contract to test and demonstrate the high-power microwave’s counter-drone capabilities.

The Army, Navy, Air Force and defense contractors have been working for years to develop so-called directed-energy weapons for short-range air defense and other applications.

Since 2014, the Navy has been operationally testing a ship-mounted laser for defense against drones, small aircraft and high-speed boats.

The fiscal 2017 defense authorization act mandated that the Defense Department accelerate development of directed-energy weapons, according to a recent report by the Congressional Research Service.

In the fiscal 2018 federal budget signed into law recently, Congress added $25 million to the Army’s budget for high-energy lasers, with about $155 million allocated to demonstrate laser weapons on trucks and the Army’s Stryker wheeled armored vehicle, according to the CRS report.

An earlier vehicle-mounted laser system developed by Northrop Grumman and Israeli contractors shot down more than 30 rockets and artillery and mortar shells during operational testing in the early 2000s.

But the chemical-based laser system was deemed too large for vehicle use and the program was canceled, according to the CRS report.

The nonpartisan research group also noted that high-powered microwave systems may be hampered by moist air, their effects through structures are unpredictable and they could be defeated by radiation shielding.

More recently, Raytheon, Lockheed Martin and Boeing have been developing solid-state lasers — which are a fraction of the size of chemical-based systems — to mount on Army vehicles for short-range air defense.

And the Army and Raytheon successfully tested a laser weapon mounted on an Apache attack helicopter in a first-of-its-kind test in June 2017.

But Kelly said the Air Force may be the first customer for Raytheon’s high-powered microwave system.

Last year, the Air Force developed a directed-energy “flight plan” and issued a request for information from industry partners for prototypes for experimentation and demonstration.

“This system would be a perfect for their requirement,” Kelly said of Raytheon’s microwave drone zapper, adding that the company has told the Air Force it could build a field-ready system in 18 months.

Raytheon also has been involved in the Air Force’s Counter-electronics High-power microwave Advanced Missile Project, or CHAMP, to develop an air-launched directed-energy weapon that can deliver massive electromagnetic pulses to disable electronic systems on a wide scale.

Between 2002 and 2010, Raytheon worked with the Air Force Research Lab to develop the “Active Denial System,” a high-powered microwave system that uses a millimeter-wave energy beam to cause a burning sensation in the skin, to use as a crowd-control tool.

The mobile system was deployed to Afghanistan in 2010, but it was subsequently withdrawn without being used and hasn’t resurfaced.

Tucson Electric tax-credit plan would save customers $3 a month

But after a year, TEP plan would withhold some federal tax-cut windfall as a hedge against future rate hikes

Raytheon’s laser dune buggy, which combines a sophisticated sensor package with a high-energy laser mounted on a Polaris MRZR vehicle, could bring down drone aircraft.