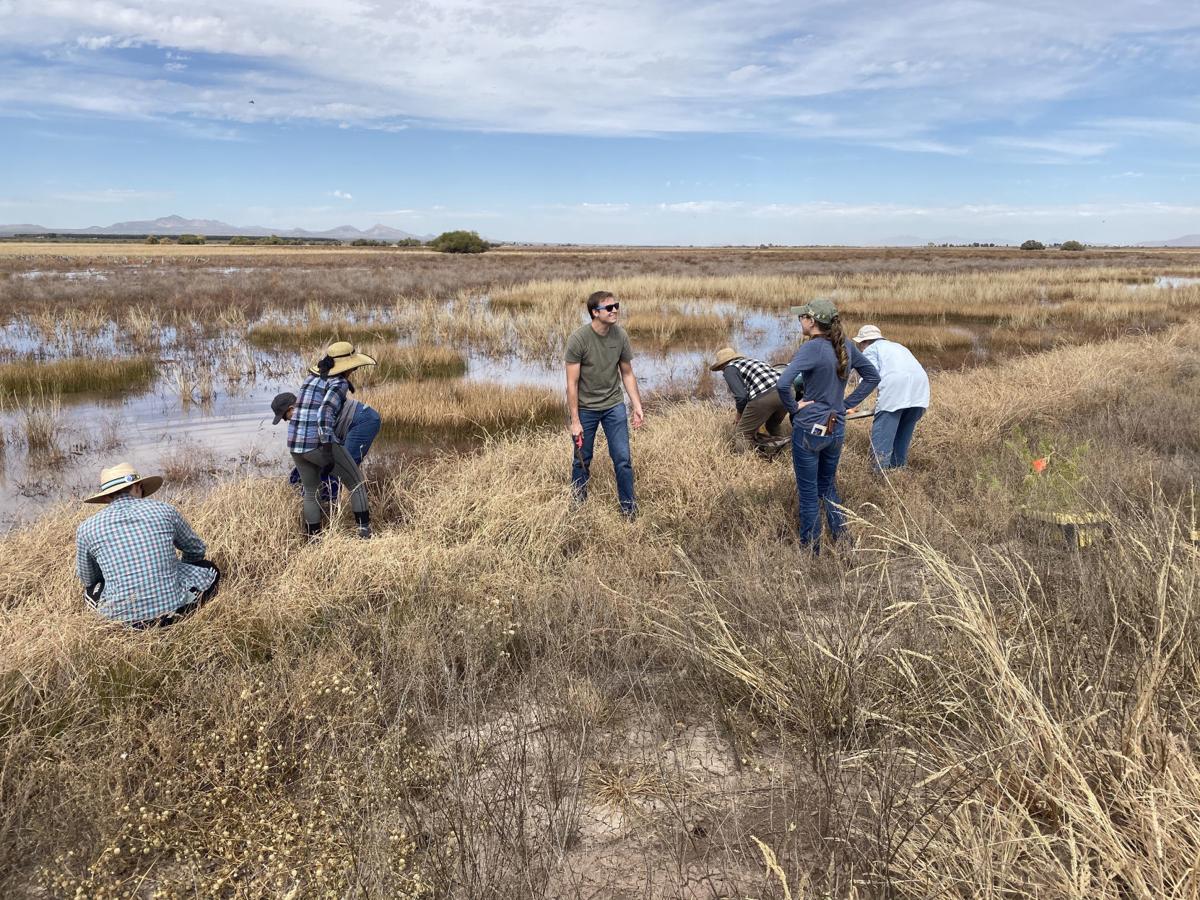 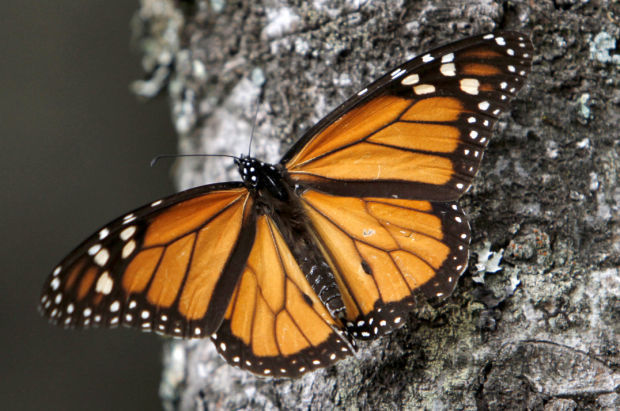 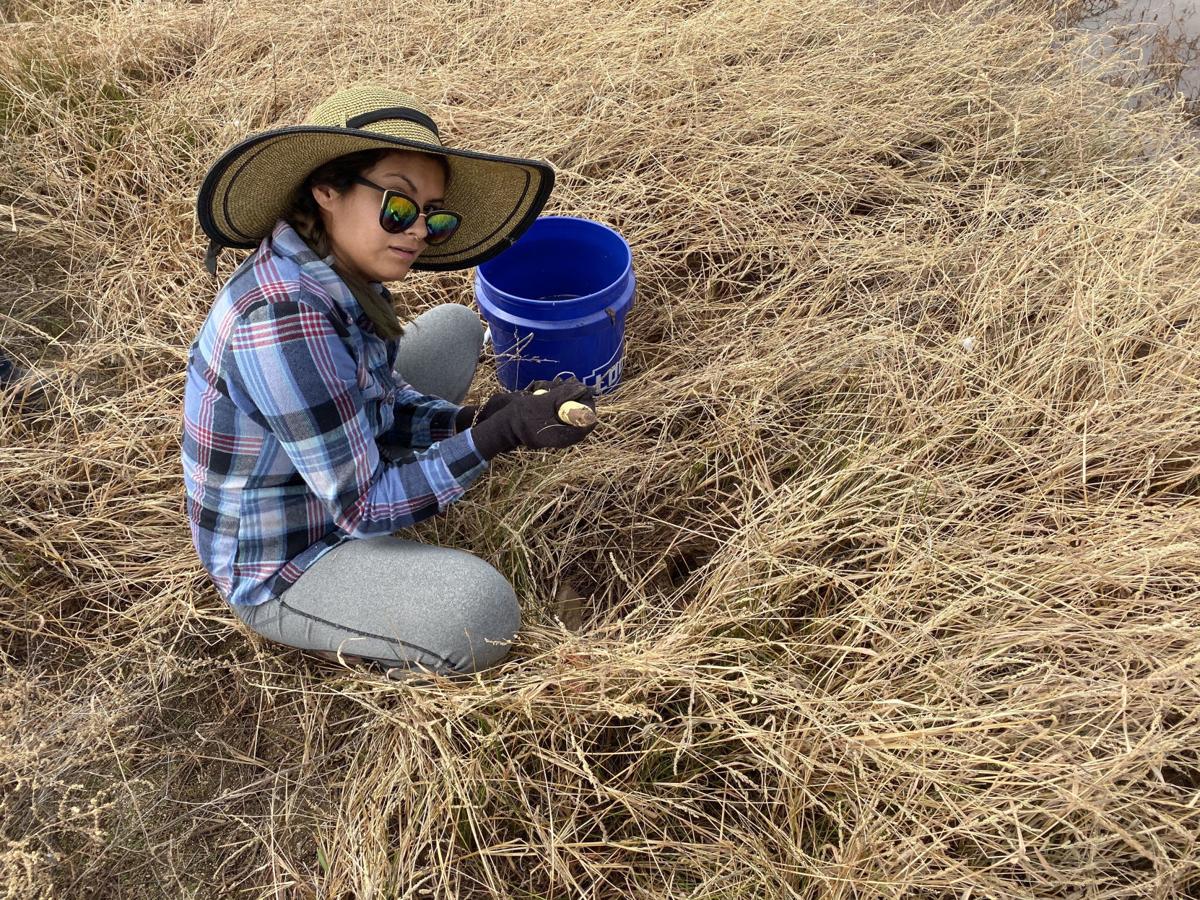 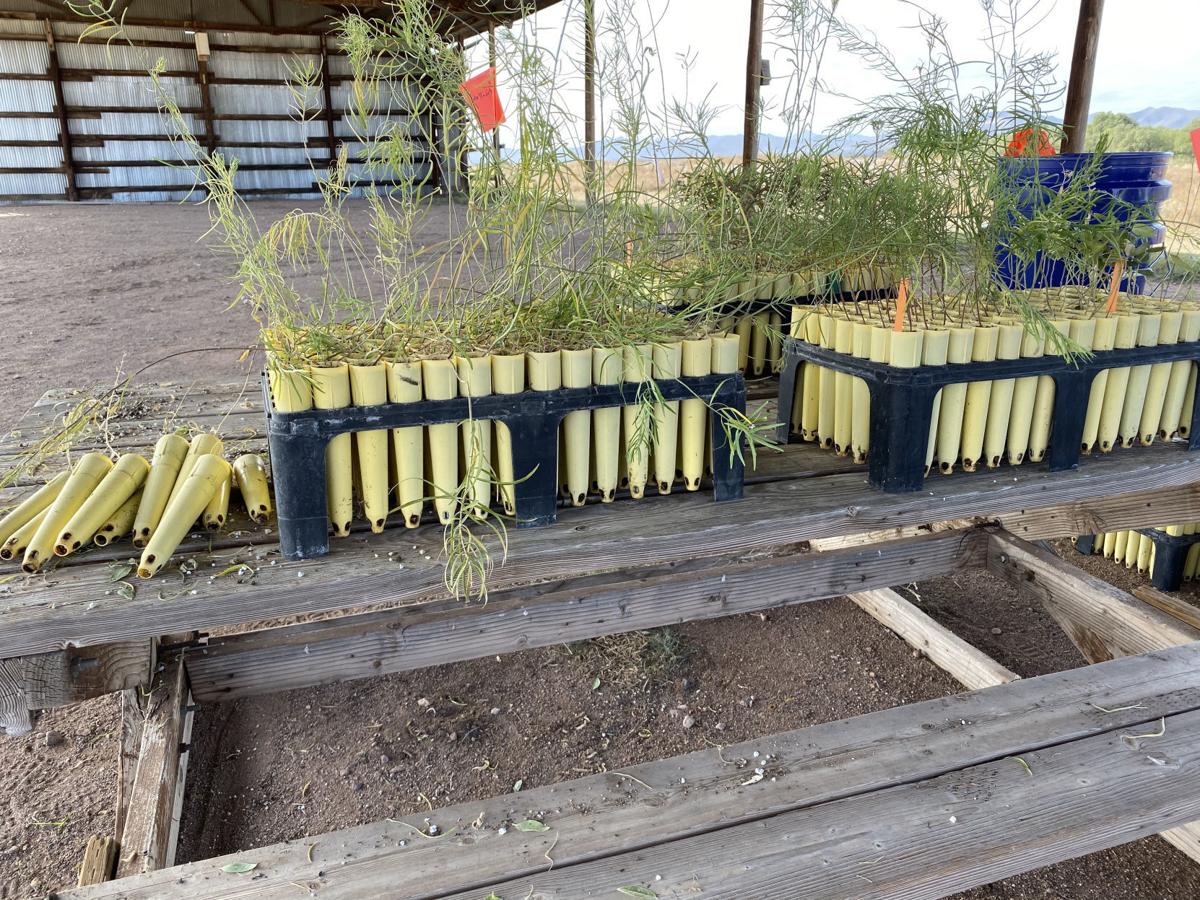 Volunteers recently planted five species of milkweed, each adapted to a different level of moisture in the soil, at the Whitewater Draw Wildlife Area near McNeal. 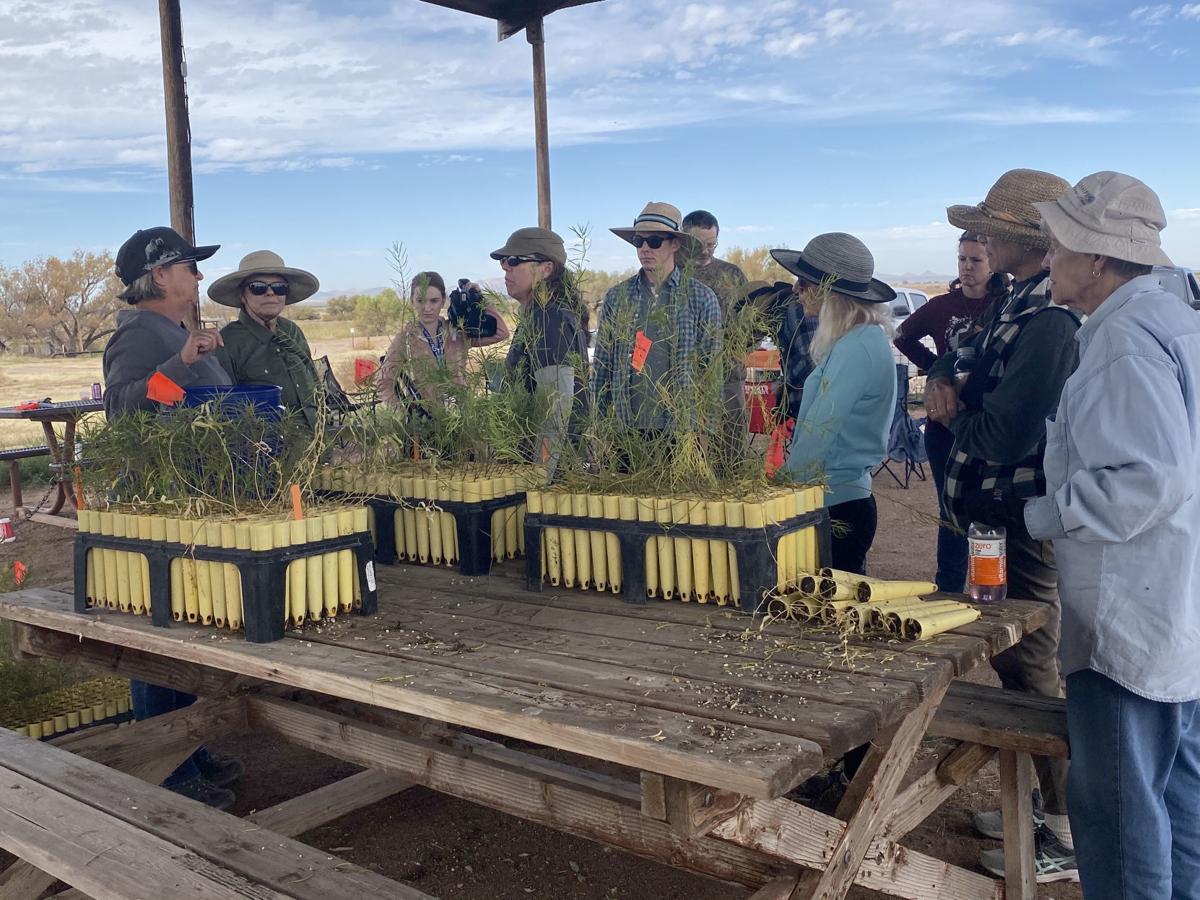 Volunteers split up to cover planting areas in the Whitewater Draw Wildlife Area, about 100 miles southeast of Tucson. Game & Fish plan to plant more milkweed in Cornville, Springerville and Safford in January and February.

McNEAL — For monarch butterflies, it’s all about milkweed. Without it, the iconic butterflies have no place to lay eggs and no place for their larva to feed — especially on their stupendous annual migrations.

To reverse the trend, the Western Association of Fish and Wildlife Agencies in January instituted the Western Monarch Butterfly Conservation Plan, a 50-year effort to help the monarchs bounce back.

Some of the first steps are being taken in Arizona.

At Whitewater Draw Wildlife Area near McNeal recently, 25 volunteers spent a day planting milkweed to create waypoints for monarchs migrating to Southern California and west-central Mexico from the northern U.S. and Canada — a trip that can stretch 3,000 miles each way.

The wildlife area — which is the winter home to more than 20,000 sandhill cranes — is a wetland nestled amid the arid plains of Southern Arizona, about 100 miles southeast of Tucson. It has damp soil in places — ideal for several species of milkweed, a stalky, green wildflower of the genus Asclepias.

Monarchs leave the northern U.S. and Canada in early fall to spend the winter on the California coast and in the Sierra Madre Occidental in Mexico, the U.S. Department of Agriculture says. Each trip takes four generations of butterflies to complete.

The planting project was set up by Arizona Game & Fish Department as its part in the overall Western Monarch Butterfly Conservation Plan. The plan is meant to help reverse the 74% population decline of the monarch in Arizona, California, Idaho, Nevada, Oregon, Utah and Washington.

“What these states did is came together, to come up with ideas to try to boost populations and give them areas for nectarine or feeding, and then waystations or layover areas and to take their next step on their migrations,” Van Pelt said.

Other regions where the monarch populations are more permanent, such as California, focused on building out roosting areas — rest stops for the migrating monarchs, which only travel in daylight. For Arizona, it means planting several varieties of milkweed through a collective effort among Game & Fish, the Southwest Monarch Study and the Gila Watershed Partnership.

Whitewater Draw was the first of several Arizona locations where milkweed will be planted, but that wasn’t originally planned. A dry monsoon season for Arizona delayed the planting at every other location, but Whitewater Draw is a special case, said Cheri Boucher, a project evaluation program specialist for Game & Fish.

“We had originally planned to do a number of these during monsoon season and, you know, August, September, October, but this past monsoon season was one of the driest in history,” Boucher said. “So we have postponed most of the events that we had planned until December, January, February.”

Whitewater Draw already has a maintained water source for the sandhill cranes, which spend their time in shallow, muddy waters, socializing and avoiding predators. Not needing to rely on rainfall to ensure the milkweed survives makes Whitewater Draw special, but the process of planting will be the same for all the six other locations.

The morning starts with a quick orientation from Steve Plath, the nursery manager for Gila Watershed Partnership, about milkweed and what it takes to get the plants to grow. Gail Morris, a coordinator and conservation specialist for Southwest Monarch Study, also explains how milkweed fits into the monarch life cycle.

The process itself involves taking immature milkweeds and planting them in moist soil on the edge of a water source.

The five different varieties of milkweed have adapted to different amounts of water, meaning they get planted in a ring type formation along the banks.

The plants survive best in moist dirt, so digging the holes is a muddy operation.

“We’re all having fun, you know, digging in the mud and planting milkweed,” Boucher said.

Since the Southwest Monarch Study began actively monitoring the monarch population in 2008, Morris has seen a heavy decline, even considering normal population fluctuation.

Climate change affects the butterflies, he said, but the impact is really felt through the decline of milkweed and other native plants.

“Climate change isn’t directly ... like, the sun isn’t killing the butterflies,” Morris said, “but it’s killing the plants that they eat, right? It (climate change) can affect the monarchs if the temperatures get too high, it can affect it in two ways.”

For the volunteers, the idea of helping make a better future for the butterflies was more than enough to get them to come out. Ariana Tamayo remembers seeing monarchs in Mexico as a child, an experience she wants future generations to have.

“They hang out in trees and it’s almost like a honeycomb of them,” Tamayo said. “It’s pretty amazing.”

For Boucher, the volunteer reaction has far exceeded expectations.

“I couldn’t have anticipated how many people were excited about this program,” she said. “When the press release went out, all of the volunteer slots were filled within a matter of hours, and that’s over 250, you know, volunteers that have signed up to help out various wildlife areas around the state.”

Arizona Game & Fish hopes all the milkweed survives from these plantings, but as the first year of this program, it’s also about learning.

Boucher said the department will be back out next year to learn and adapt.

“With any habitat rescue duration effort, you do expect a certain amount of mortality,” she said, “but we’re hoping to learn from the plants that we’ve put in today.”

They plan to record how many of each species survived in each location, which will help them adjust their planting to have a higher rate of survival for the plants, Boucher said.

Weather permitting, Game & Fish will plant milkweed in Cornville, Springerville and Safford in January and February. Other planned sites are near Buckeye, Black Canyon City and Bullhead City.

How to design your Tucson pollinator garden

Where do you find native, pesticide-free plants in Tucson? What features does your pollinator garden need? Learn how to design your Tucson pollinator garden and get resources for learning more about the process.

About 1:45 a.m. Sunday, police were dispatched to the area of West Speedway and the Interstate 10 frontage road for the crash.

Agency: Despite steep decline, monarch butterflies aren’t as endangered as other species

The U.S. Fish and Wildlife Service concludes that although the monarch butterfly warrants protection, dozens of other species face more urgent situations and have a higher priority.

Volunteers recently planted five species of milkweed, each adapted to a different level of moisture in the soil, at the Whitewater Draw Wildlife Area near McNeal.

Volunteers split up to cover planting areas in the Whitewater Draw Wildlife Area, about 100 miles southeast of Tucson. Game & Fish plan to plant more milkweed in Cornville, Springerville and Safford in January and February.