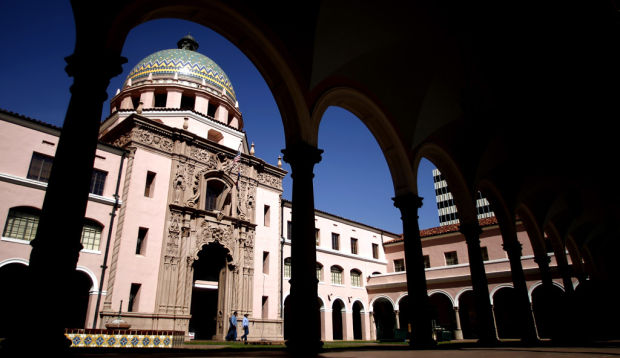 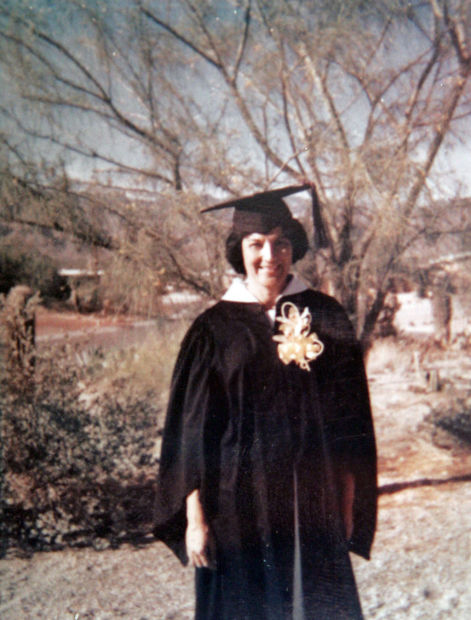 When retired Pima County Superior Court Judge Lillian Fisher took the bench in 1975, she held court among the beer kegs and spigots in the the old bar of the fire-damaged Pioneer Hotel.

One of her first cases involved go-go dancers. It was "hilarious" given the nature of the case and the setting, said Fisher, now 91.

"There was very graphic descriptions of what they were not wearing and what was not covered and everybody's looking at beer kegs," she said.

For nearly a year her chambers were a small janitor's closet where she did her research alongside brooms and mops in the pink Pima County Courthouse at North Church Avenue and West Pennington Street.

She said walking to and from her courtroom with her bailiff, clerk and other staff members made her feel like Snow White and the Seven Dwarfs.

Fisher and several other retired judges and still-practicing attorneys gathered last week in what's now called Courtroom 8, to share memories of their time in the courthouse.

Like many of those same judges and lawyers, the courthouse will "retire" next year.

The invitees were asked to share the recollections of the courthouse to be used in a project documenting the history of the courthouse undertaken by Justice Court Judges Anne Fisher Segal and Jose Luis Castillo Jr., presiding Superior Court Judge Sarah Simmons and University of Arizona graduate student Abigail Wine.

Like former Arizona Supreme Court Justice Stanley Feldman, who was caught with his pants down when he was a trial lawyer in then-Superior Court Judge Alice Truman's chambers.

Before closing arguments in an injury case presided over by Truman, Feldman went to the bathroom and he couldn't get his zipper back up. The bailiff came to find him and when he explained the situation, he was summoned to Truman's chambers.

Feldman's opponent came in while Truman was fixing the zipper.

When the pink building, designed by architect Roy Place, was completed in 1929, most of the county's offices fit inside. It was expanded in 1955.

The court and those offices will move to a new county complex near North Stone and East Toole avenues, expected to be completed in 2014.

The court has 10 courtrooms in the pink building and two in another building at 160 N. Stone Ave., where the civil unit, the IT staff and records, once kept in a room under the mosaic dome, are also located.

The pink courthouse has only one jury deliberation room, which doubles as a staff conference room, and keeping the concrete building at a comfortable temperature with an old heating and cooling system is difficult, Kooi said.

The new complex will allow all court services to be in one building, and will allow for improved security and technology, which can be a challenge in an old and aging building, Kooi said.

"It'll be a big benefit to people who appear in our courts or people who work in our courts to bring a new level of technology. But also it will be a safer place too because it won't be as porous as this building is," Kooi said.

Future plans for the building include converting the ground floor into an expansion of the Tucson Museum of Art that features a Western art collection, moving the Board of Supervisors offices and the County Administrator's Office to the second floor and the Clerk of the Board's Office to the third floor, said County Administrator Chuck Huckelberry.

The historic Courtroom 8, with its ornate hardwood decor and bench, would be preserved and likely used as a space for meetings and ceremonies, Huckelberry said.

What's now known as Courtroom 8 is the only one from the original building still in use as a courtroom. It's also where John Dillinger was arraigned when he was arrested here in 1934.

The courthouse will need to be renovated to accommodate the changes.

The county has done architectural planning and programming studies to see if the changes are feasible, and the next phase is determining the cost of the renovation, Huckelberry said.

The renovation costs will be part of the next bond issue in November 2014, he said.

"We just look forward to a lesser-impact use of the courthouse and preserving its historical integrity because it's an icon of Pima County," he said.

• The Pima County Courthouse was listed on the National Register of Historic Places in 1978.

• The sheriff charged members of the public a fee to come to the jail, then part of the courthouse, for a peek at John Dillinger.

• The courthouse was featured in the TV series "Petrocelli" and the film "Silver Streak."

Gunman in deadly Tucson Amtrak shooting was on the run, facing violence charges

The gunman in the deadly Amtrak shooting that left a DEA agent dead had bonded out of jail in California where he was facing violent charges.

For Star subscribers: The University of Arizona will lead the newly launched Precision Aging Network, which aims to recruit 350,000 people to participate in the largest-ever study of normative aging brains.

In general, the program is intended to promote ownership of marijuana establishments among residents of certain communities.