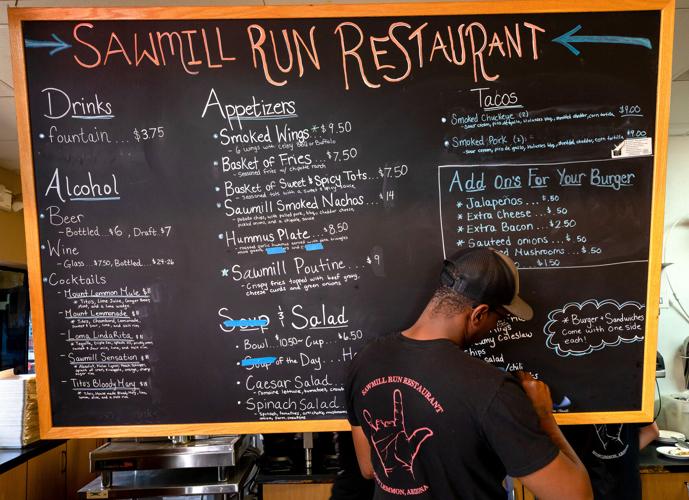 Byron White, back-of-house manager, removes tape off the menu after an order arrived at Sawmill Run in Summerhaven outside of Tucson, Ariz. on July 20, 2022. 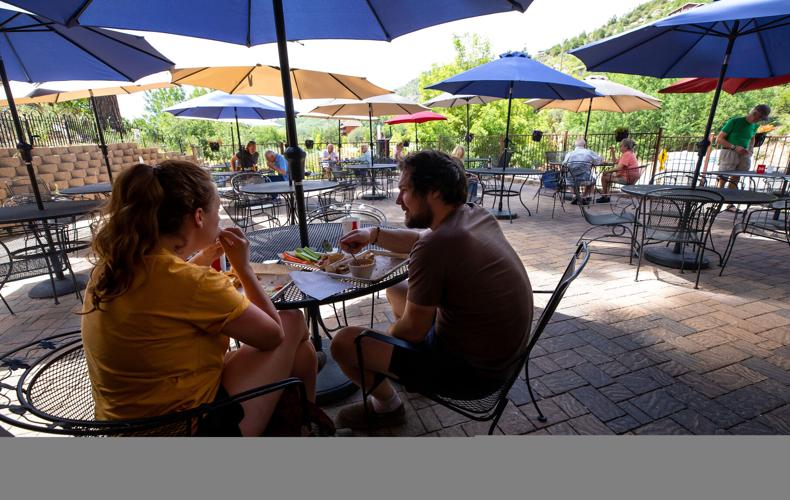 Andrew Lane, right, talks with his girlfriend Deanna Sherman while they eat their food on the patio at Sawmill Run in Summerhaven outside of Tucson, Ariz. on July 20, 2022. 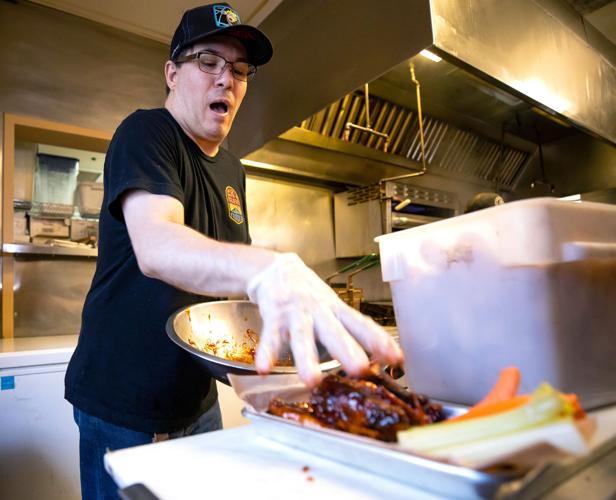 Michael Beal, fry cook, reacts while placing hot wings on a tray for a customer's order at Sawmill Run in Summerhaven outside of Tucson, Ariz. on July 20, 2022. 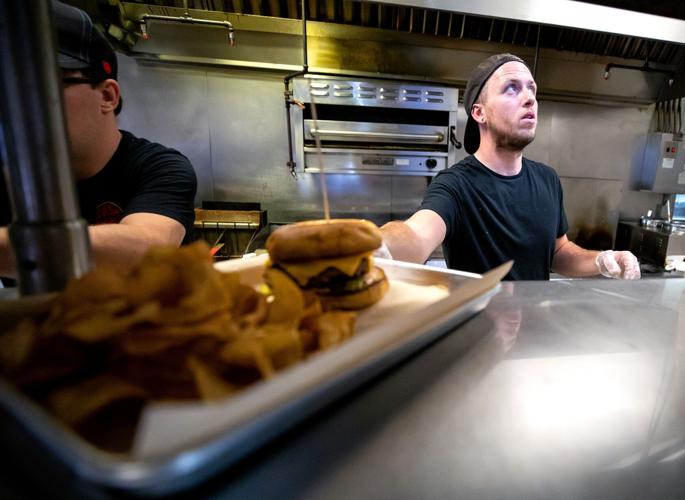 Adam Herrell, line cook, looks at the order screen while placing a customer's order on a shelf for the servers at Sawmill Run in Summerhaven outside of Tucson, Ariz. on July 20, 2022. 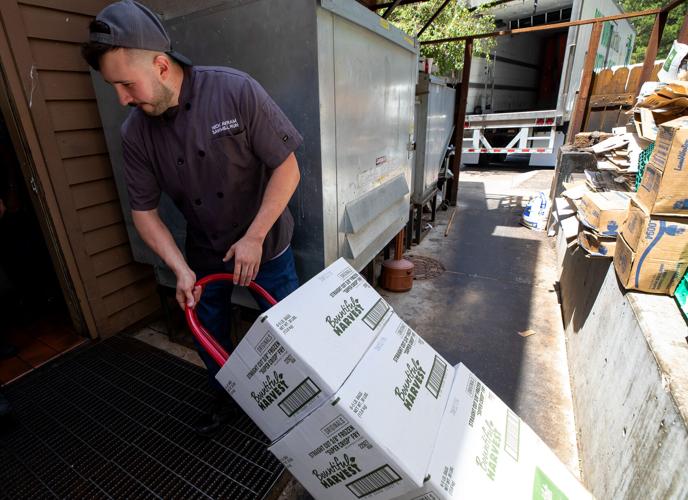 Nick Avram, manager and grandson of owners, pulls in some items from a recent order at Sawmill Run in Summerhaven outside of Tucson, Ariz. on July 20, 2022. 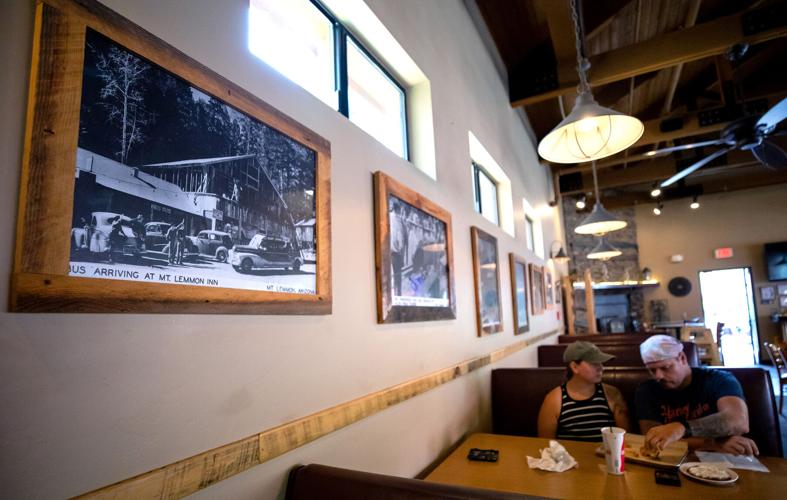 An old photo from the 1950s of a bus arriving at the Mt. Lemmon Inn hangs on the wall along other old photographs while customers Wayne Farley, right, and his wife Heather Farley eat their food at Sawmill Run in Summerhaven outside of Tucson, Ariz. on July 20, 2022. 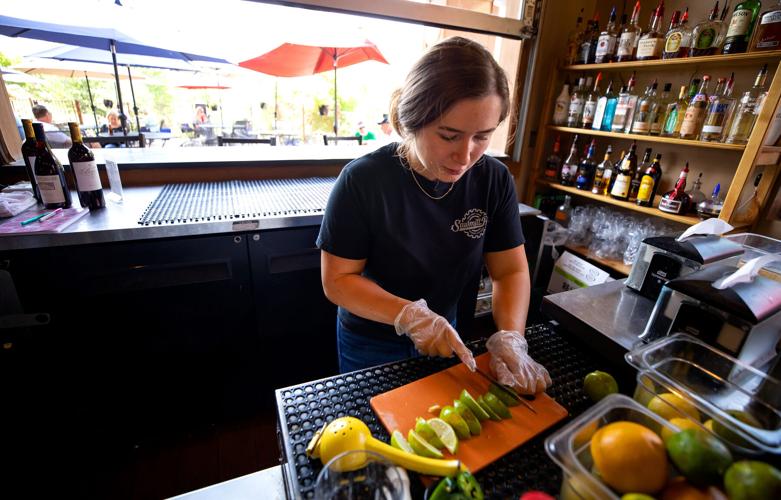 Stephanie Avram, bartender and granddaughter of owners, cuts limes for the bar at Sawmill Run in Summerhaven outside of Tucson, Ariz. on July 20, 2022. 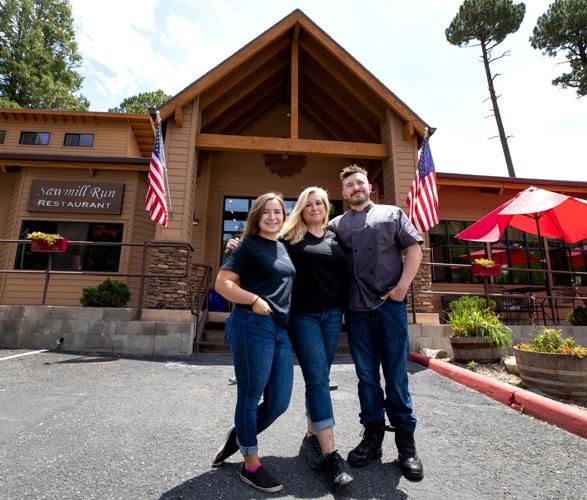 Jenni Zimmerman, center, front-of-house manager, stands for a picture with her daughter Stephanie Avram, left, and her son Nick Avram in front of Sawmill Run in Summerhaven outside of Tucson, Ariz. on July 20, 2022. 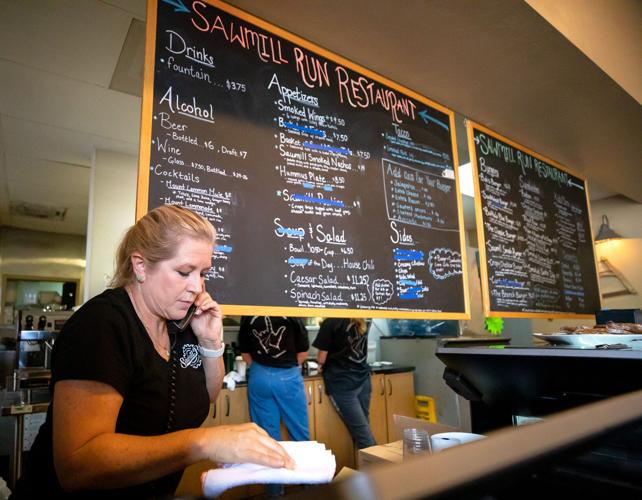 Jenni Zimmerman, front-of-house manager, talks on the phone at Sawmill Run in Summerhaven outside of Tucson, Ariz. on July 20, 2022. 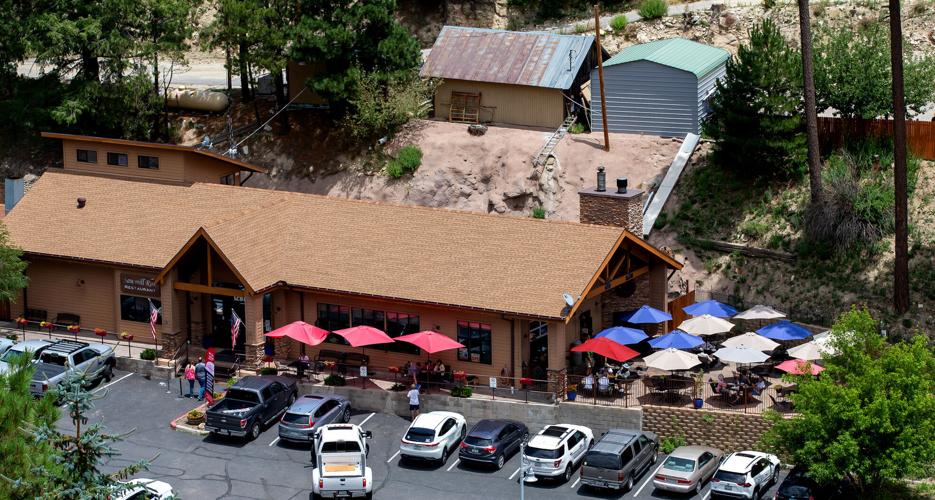 The Sawmill Run restaurant can be seen from North Phoenix Avenue in Summerhaven outside of Tucson, Ariz. on July 20, 2022.

Byron White, back-of-house manager, removes tape off the menu after an order arrived at Sawmill Run in Summerhaven outside of Tucson, Ariz. on July 20, 2022.

An old photo from the 1950s of a bus arriving at the Mt. Lemmon Inn hangs on the wall along other old photographs while customers Wayne Farley, right, and his wife Heather Farley eat their food at Sawmill Run in Summerhaven outside of Tucson, Ariz. on July 20, 2022.

Jenni Zimmerman, front-of-house manager, talks on the phone at Sawmill Run in Summerhaven outside of Tucson, Ariz. on July 20, 2022.

The Sawmill Run restaurant can be seen from North Phoenix Avenue in Summerhaven outside of Tucson, Ariz. on July 20, 2022.

“The shipment is ruined.”

In an industry with notoriously tight margins, it’s a major setback for any restaurant. But when you’re operating 25 miles up a mountain road, there’s no safety net.

“If we run out of something, there’s no running out to Restaurant Depot to stock up,” said Nickolas “Nick” Avram. He’s the manager of the Sawmill Run Restaurant in Summerhaven, the town at the top of Mount Lemmon.

Last Monday — Sawmill Run’s equivalent of a Saturday — the food distributor was in a foul mood. He threw all the inventory haphazardly, the stacks disorganized and some product crushed. But most crucially, he put the frozen food into the walk-in fridge, and the refrigerated food in the freezer. When staff arrived Wednesday morning, they were welcomed by nearly $4,000 of unsafe food, thawed in the fridge.

What was an emergency on the restaurant’s end — frantic calls to the food distributor, who sent a replacement shipment up the same morning; all free hands moving the shipment into the correct freezer — appeared to customers as blue painter’s tape, crossing out the menu items that relied on products that were spoiled. Visitors, who were lined up out the door within minutes of the restaurant opening at 10:30 a.m., were quick to point out inconveniences.

When I have visited Mount Lemmon, I’ve had my own questions. Why aren’t there more dining options when there’s so much demand? Why does this restaurant run somewhat differently than what I’m used to in the city of Tucson?

But having worked in service, I had a feeling that there were pressing reasons behind these business decisions. I spoke to the manager to find out: what challenges does a restaurant on a mountain face that others in town might not?

“We don’t have as many logistical difficulties as you might think,” Nick said. “We rely on Shamrock [the food distributor]. My inventories have to be tight.”

Supply chains are cheaper the more efficient they are: if a delivery truck can make more deliveries on the same tank of gas, it’s better for everyone. When there are only a handful of restaurants, separated from the rest of a metro area by a 25-mile commute on a small, windy mountain road with thousands of feet in elevation gain, with diesel costing over $5 a gallon, it’s not in a distributor’s best interest to cater to that community. Shamrock is one of the few that have stepped up.

The crisis they faced that morning was an extreme outlier, the result of a single disgruntled delivery man. Usually, their trust is tight — and Shamrock sent another shipment the same morning Sawmill Run called.

The hardest part of the job is the commute: not only for each of Sawmill Run’s nine employees, but for Nick, who needs to retain staff despite this challenge.

The commute is also extended by housing realities: most food service workers cannot afford to live in the Catalina Foothills closest to the road that goes up the mountain. They’re driving halfway across town.

The team also needs to adapt to extreme weather. “The Bighorn Fire shut us down for two months,” he said of the 2020 blaze.

In the slower winter season, Nick reads the asphalt for snow cover.

“When it starts snowing, we have to see if it’s going to stick, if people can get home safely,” he said. “But one year it snowed six feet so quick, there were 30, 40 people stuck on the way down … They were bringing people to the community center to keep warm.”

Summerhaven by the numbers

When you’re eating at Sawmill Run, 12976 N. Sabino Canyon Parkway, you might notice that things are run slightly differently than in town. A server doesn’t take your order; you order at the cashier and are given a number for your table. Food is served on a tray lined with wax paper. Few entrees require utensils. The menu is simple and focused on the grill. Every one of these choices is intentional — to make the jobs of workers as easy as possible.

Potential cooks don’t need to be trained in French techniques to grill hamburgers. Dishwashers can focus on the industrial kitchenwares that need cleaning, rather than handling delicate porcelain plates. Servers can focus on running meals and keeping customers happy.

But the most crucial strategy Nick uses to maintain staff is paying workers well.

“We start dishwashers at $17 an hour. A lot of people aren’t going to come up for anything less than that,” he said.

This isn’t just because gas prices are soaring — though he gives every worker a $100 monthly bonus for the pump — the decision also involves the wear that accumulates on the car, and the labor of the drive itself.

It’s not just staff who are spending money on gas up the mountain: literally everything needs to be brought up or down individually, using a lot of gas. Trash services cost $1,500 a month, to get their dumpsters emptied twice. The largest portion of that expense is for the diesel fuel for the garbage truck.

If you ever wonder why there aren’t more options on Mount Lemmon, it’s because the startup fees to get everything brought up the mountain — whether that’s construction materials or premiums on services like plumbing and electricians — are prohibitive.

“It’s a labor of love,” said Jenni Zimmerman, a third-generation resident of Summerhaven and president of the Mount Lemmon Business Economic Association.

Her family has owned five businesses over those three generations. The fourth — her daughter and son — work at Sawmill Run as the bartender and manager, respectively. They do it for their family’s legacy, to honor what their great-grandfather started in 1935, when he moved to Summerhaven and eventually built a sawmill and the old Mt. Lemmon Inn.

Those who have lived in Summerhaven, the connection to the mountain is essentially what draws us tourists there, but deeper: the peace of nature, the close-knit community, the beautiful setting. When I asked staff what brought them back to Sawmill Run despite the commute, they affirmed all these things.

Byron White is the back-of-house manager and the family’s longest-tenured employee at a little over a year. What keeps him coming back, he said, was his connection to the mountain.

“Best job I’ve ever had,” said Cassidy Hilliard, a server. “It pays well, it feels more like a family. You feel less taken advantage of,” Cassidy said.

It might feel like a family, in part, because it is: Jenni is manager Nick’s mom. The bartender, Steph Avram, is her daughter, his sister. One-third of the employees are literally family.

Nick worked his way up to managing from starting as a dishwasher at age 15. His sister, Steph, started helping out at age 12, but he encouraged her to slow down during high school so she didn’t get burned out at a young age.

While his family’s connection to the mountain — and the cabins that they have, which make staying overnight, if need be, easier — has kept him going for a decade, he doesn’t expect that level of commitment from his workers.

He wants them to feel like this is a relaxed workplace, one that understands if you’re 15 minutes late because you were stuck behind the school bus, one that gives you the freedom to make your own decisions as long as you’re being safe and getting food out there.

The biggest perk of the job, according to Nick — who, in nearly 10 years, has worked them all — is the slow season.

“When we’re busy, we’re busy, but when we’re slow, we’re not going to cut your hours,” he said. “We’d rather keep you on staff. In November to December, we usually lose money, but it’s something we accept.”

Better than Eegee’s?! A foodie day trip to Nogales, AZ

Looking for a day trip in Southern Arizona? Here, we're making the argument for a visit to Nogales, Arizona. The small town packs a big punch. Here are our recommendations for food and things to do!

A new Thai restaurant just opened on Tucson's east side

Nattha's Bann Thai Asian is located in the former Peking Palace on Tucson's east side. The new restaurant serves Thai and Chinese dishes.

NOW OPEN: A new cafe is tucked in this bike shop right off The Loop

Tucson cyclists rejoice! A new cafe is coming to The Loop! Hello Bicycle bike shop is opening an espresso bar with pastries, pour-overs and tea in their cycling community in midtown Tucson.

Life at the station: How Tucson firefighters eat

Firefighters spend half their week at the station, for 24 hours a day. So how do Tucson Fire Department (TFD) firefighters feed themselves? They cook in teams, clip coupons, and prep meals that can be eaten cold or on-the-go.

The Tucson, Arizona chefs had one hour to create four dishes using the secret ingredient — cherries — as a central component. Here's what they came up with.