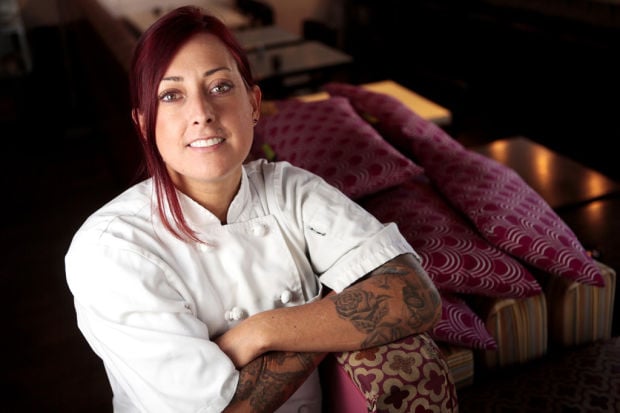 Virginia "Ginny" Wooters is known for her creative takes on comfort food and Southern specialties like chicken and waffles. 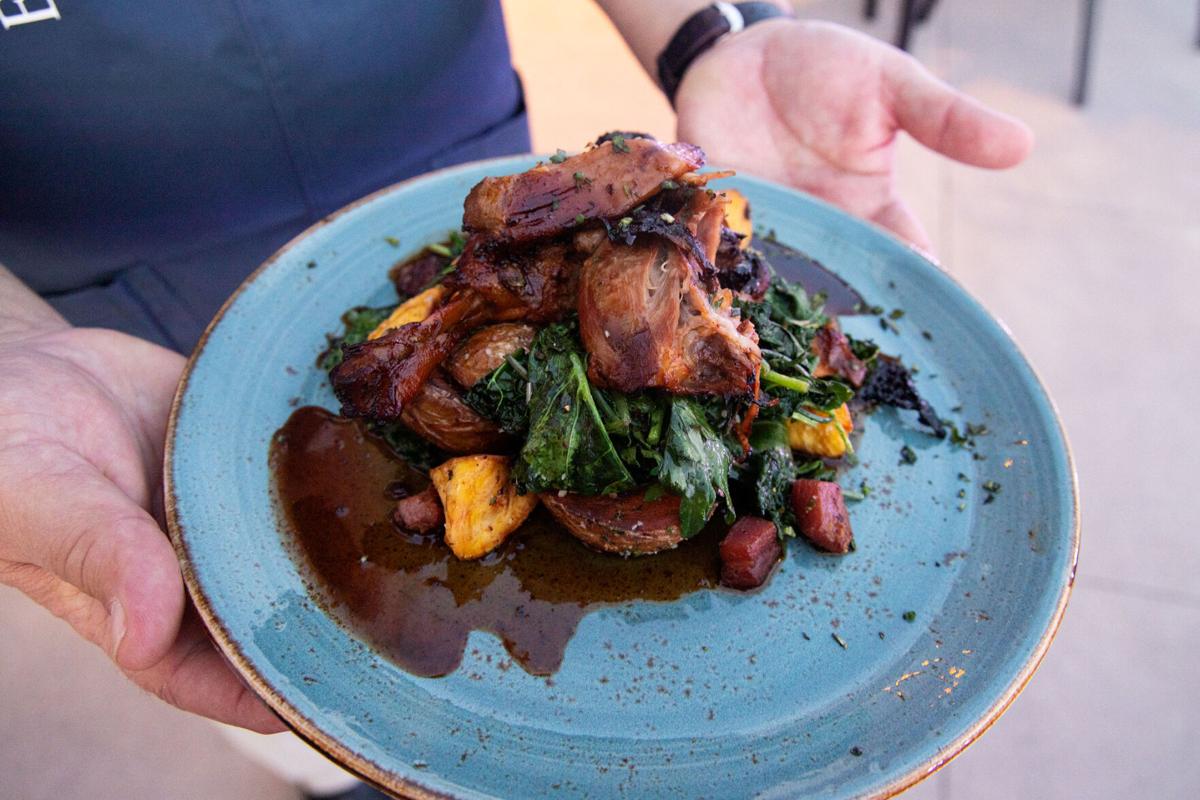 The confit of pata de pato, or duck confit, $24, is paired with potatoes, plantains and bacon. 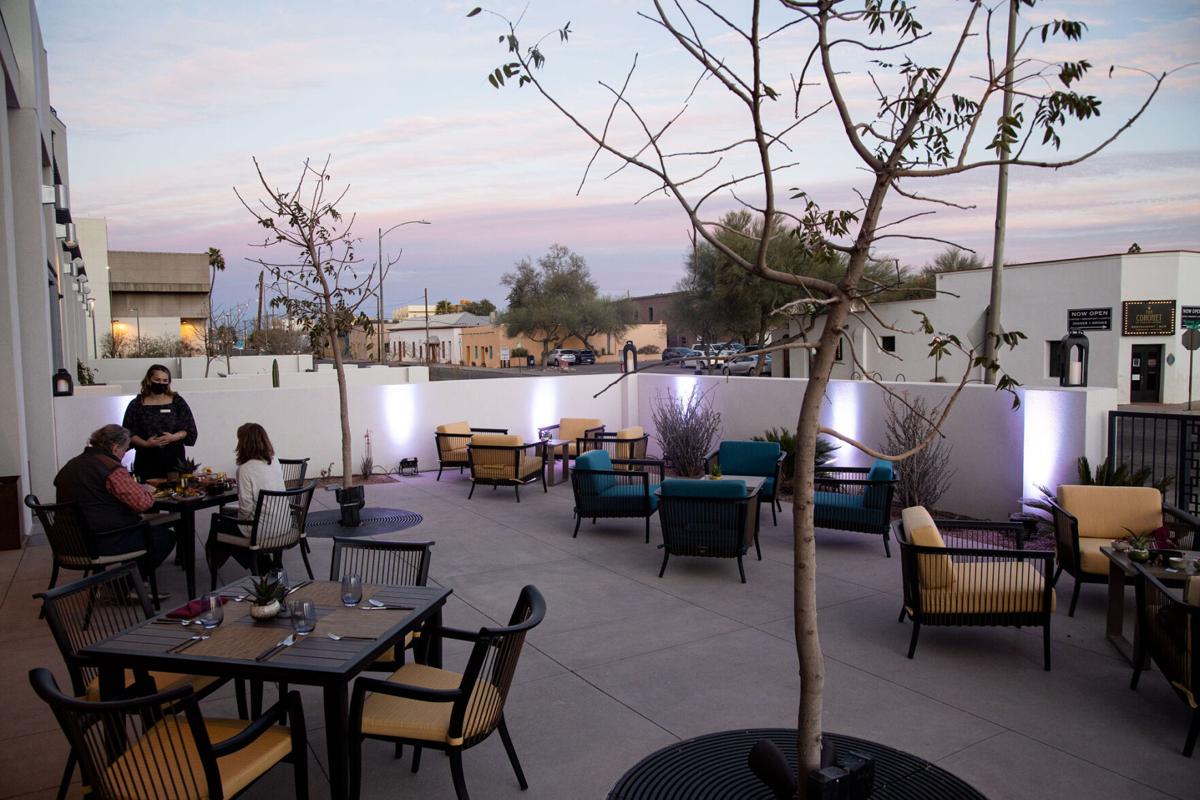 Sunset on the patio at El Mezquite, with lounge chairs and a soft pink view. 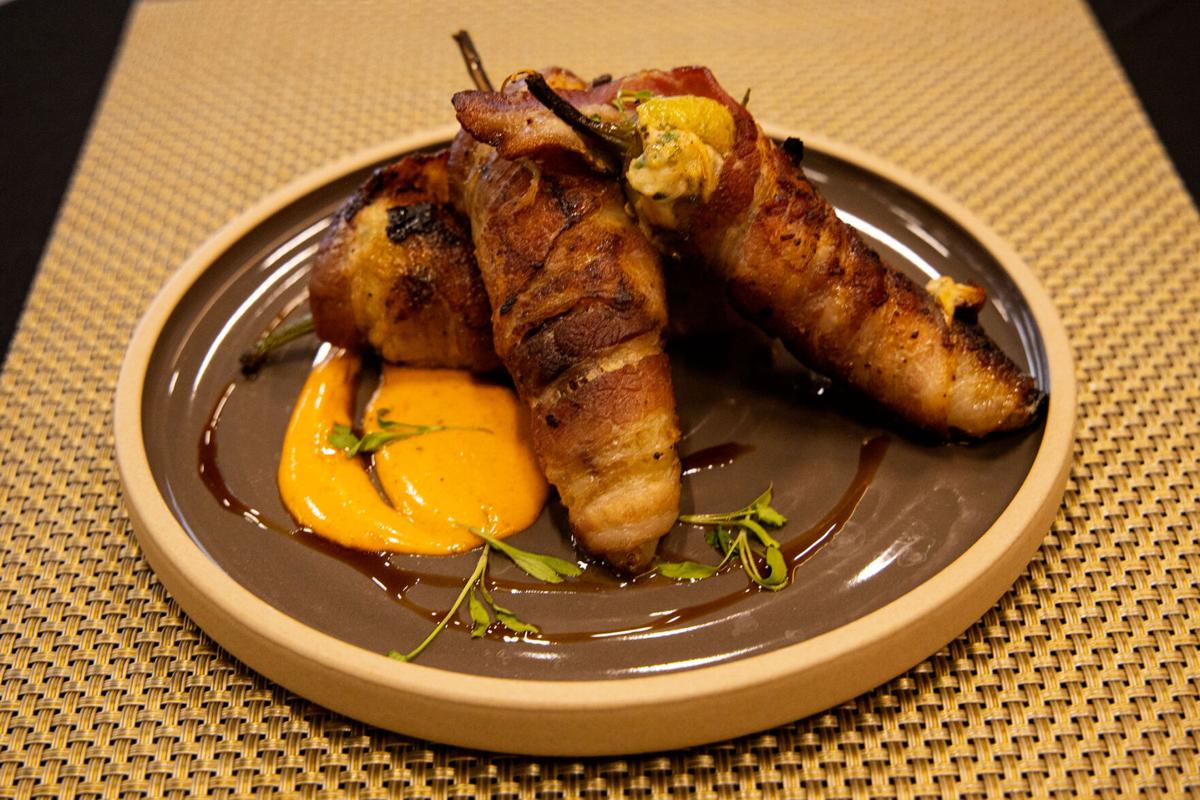 Downtown Tucson's culinary scene is in serious need of a star chef.

The past year has not been kind to gourmet restaurants, with the departure of Janos Wilder's Downtown Kitchen + Cocktails and upscale Mexican restaurants Cafe Poca Cosa and Elvira's. (Not to mention, the temporary closures of Penca, Reilly Pizza, Maynard's and La Cocina.) Now that diners are getting ready to venture back out in the world, where will they go?

Idea! One of Tucson's most respected chefs is leaving her home at an east-side Hilton to head the kitchen at the new DoubleTree Hilton, next door to the Tucson Convention Center. Virginia "Ginny" Wooters spent much of her career leading various Brian Metzger projects like The Abbey and Jax Kitchen, and most recently mastered gourmet Italian cooking at the Hilton Tucson East's Alloro D.O.C Italian Trattoria.

Now she's trying her hand at Latin cuisine with the new El Mezquite Grill and Taqueria. The restaurant, which opens Tuesday, March 23 at 4 p.m., features a menu of gourmet Mexican staples as well as continental Spanish and French dishes. While the mesquite in the name refers to the smoky wood grilling popular in Sonora, Wooters casts a wider net with dishes like duck confit with a chipotle-agave glaze.

"It's definitely a mixture of all the different types of cooking that I've done," Wooters said. "It's a take on Mexican food, but not what you're normally used to ... different textures and ingredients, á la minute, that's kind of my style."

Aside from the chef, one of the main draws of the restaurant is its spacious patio, which looks out onto the historic adobes of Barrio Viejo. We had an opportunity to enjoy the breezy spring weather during the restaurant's soft opening this month, where we tasted everything from tacos to steak tartare with plantains and chimichurri sauce.

Based on this initial visit, Wooters seems to be a natural at cooking Mexican food. Some of the highlights were her sensational take on Sonoran toritos, a popular street food appetizer that usually consists of a yellow caribe chile wrapped in bacon and stuffed with pieces of shrimp and melted cheese. Wooters' version flairs it up with herbed goat cheese and soft chunks of crab, which give the peppers a silken touch of California cuisine.

Budget diners might do well by grabbing a couple tacos from the bar menu and hitting the patio; I especially enjoyed the masa-battered mahi that was topped with shredded kale and pickled onion. Their corn tortillas are housemade and brilliantly colored with natural flavorings like purple hibiscus and blue butterfly pea flower.

"You can cook anything as long as you put your heart into it: Every culture has a fried dough, every culture has a thing with potatoes. It's just about doing it different and putting your own twist on it," she said. "I'm cooking what I like and hoping that everybody else likes it."

New cafe at Tucson Botanical Gardens has a great patio, and all the plants

Run by the Westward Look resort, Edna's Eatery is a casual breakfast and lunch spot located on the grounds of the historic property. They serve salads, sandwiches and root beer floats.

Where to find and how to buy recreational marijuana in Southern Arizona and Tucson now that it has been legalized. Find out about the different indicas, sativas and other pot products they're selling, as well as edibles, and how to partake legally and safely.

A traditional recipe, salsa macha or salsa de aceite, is gaining popularity at Tucson restaurants and food trucks. Here's where to get this spicy chile condiment.