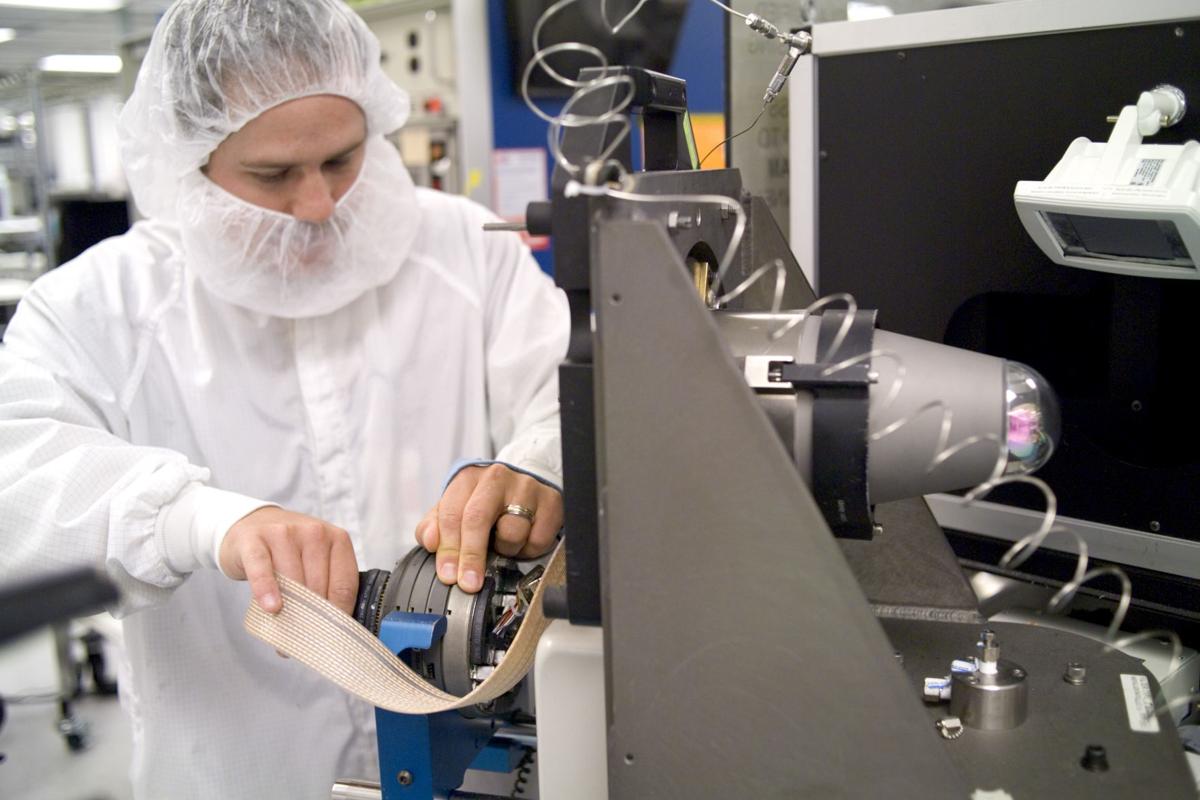 Raytheon Missile Systems is the Tucson region’s largest employer, with about 13,000 workers and an economic impact of about $2 billion. 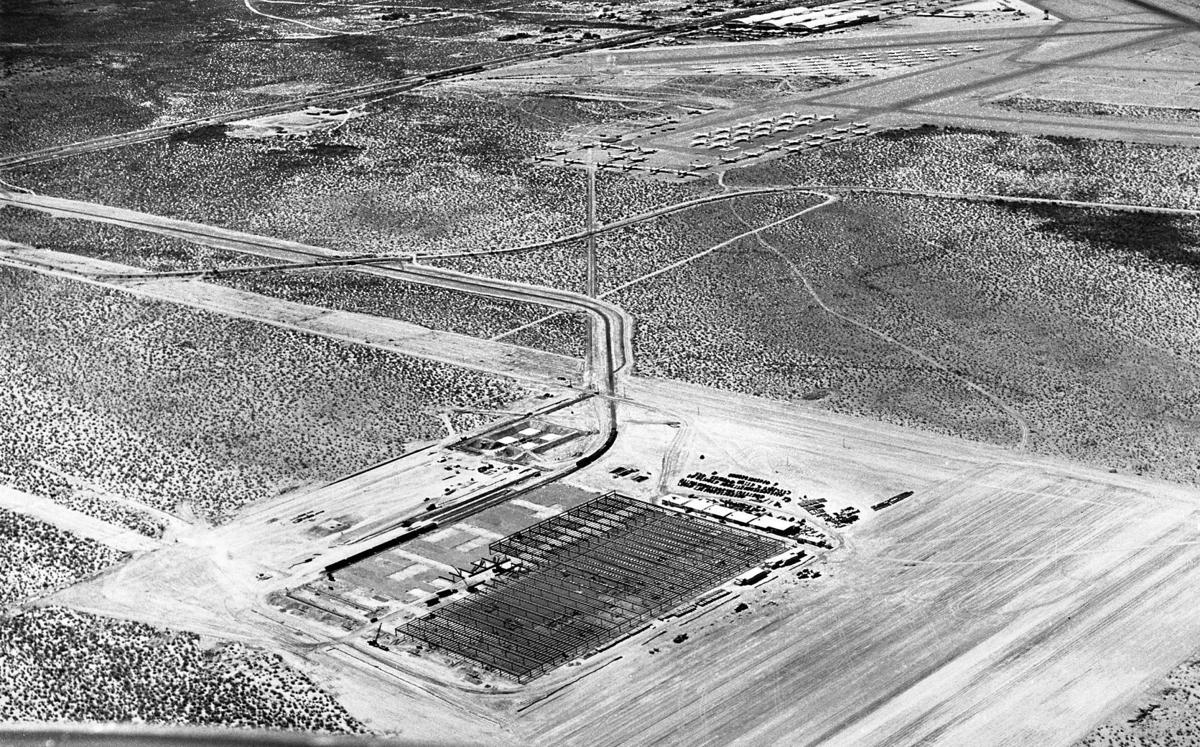 Hughes Aircraft plant under construction south of Tucson in June 1951. It is now Raytheon Missile Systems. 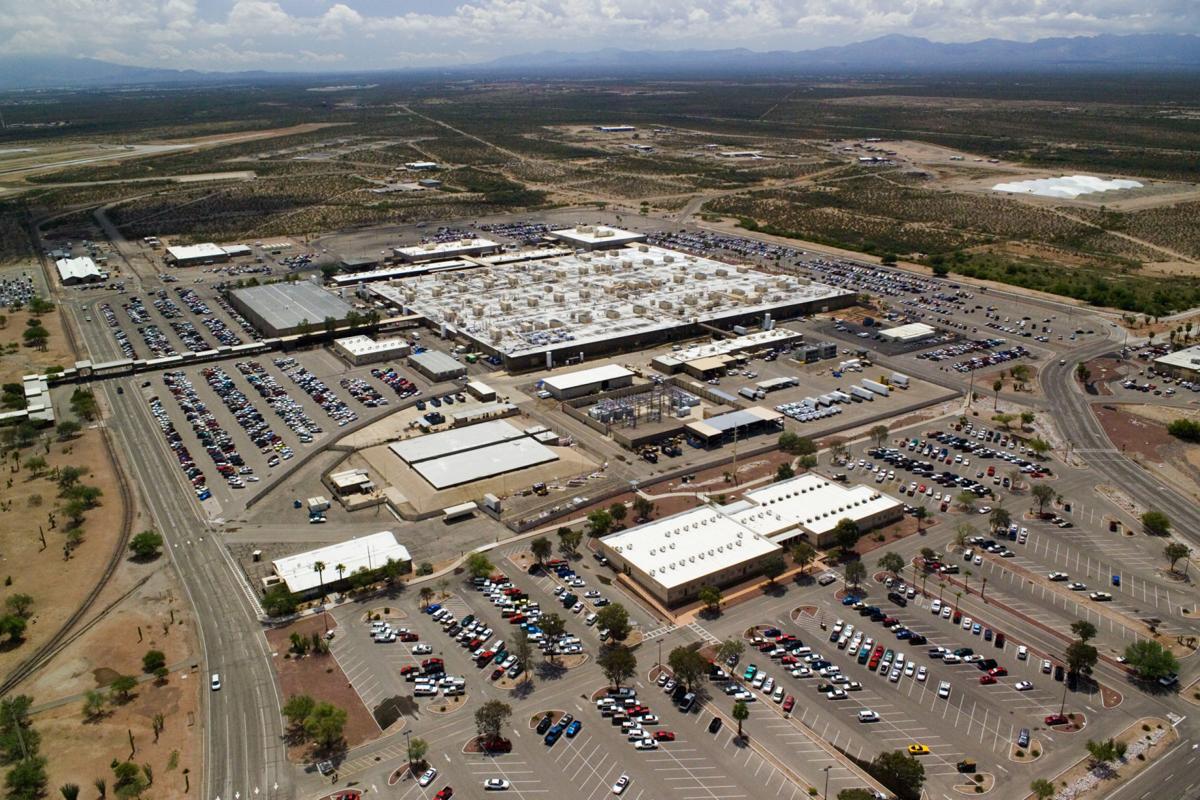 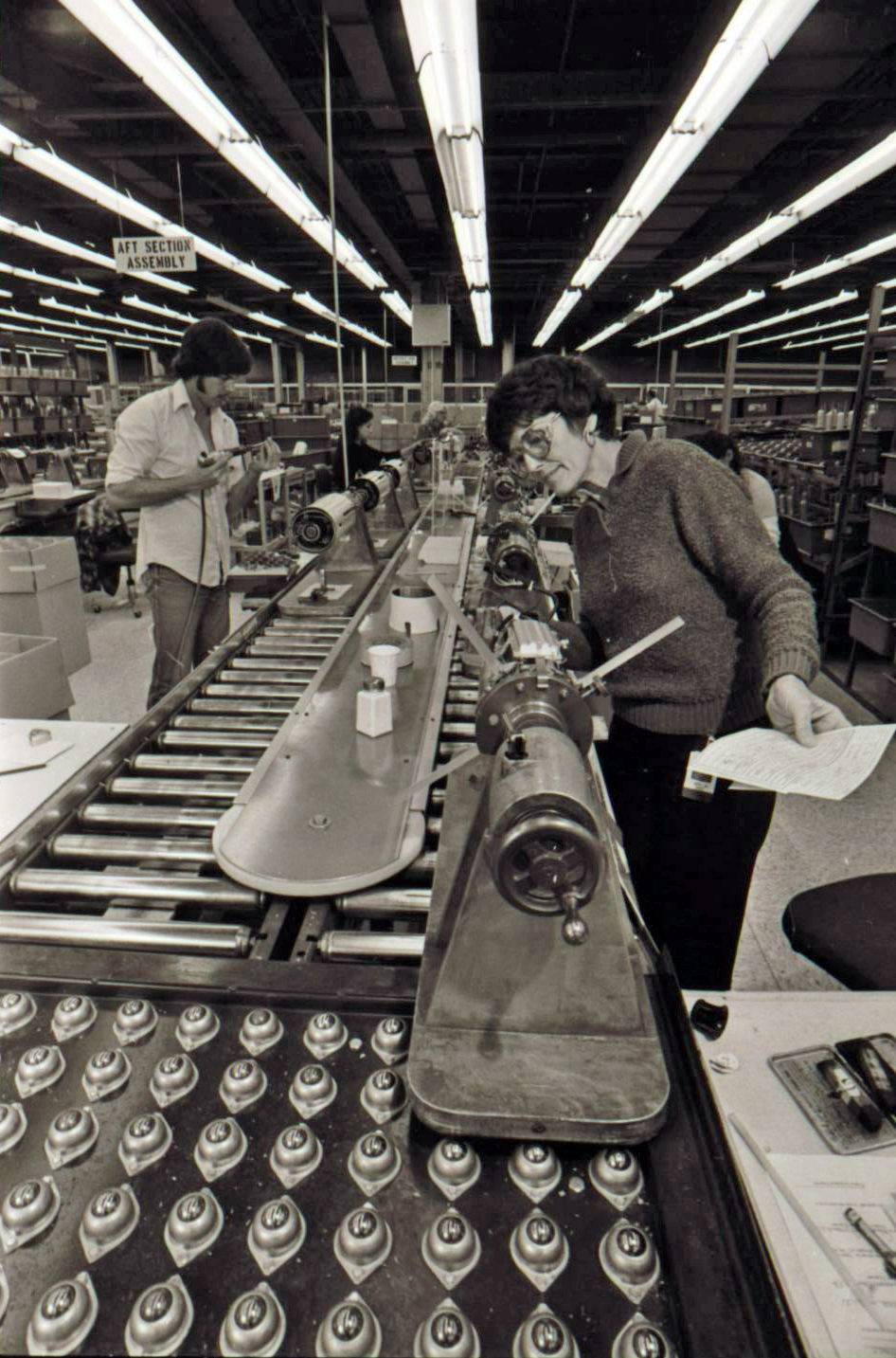 The planned mega-merger of Raytheon Co. and United Technologies Corp. poses some risks to employees, shareholders and communities like Tucson that host Raytheon and UTC operations.

Though no immediate operational changes are foreseen, Tucson could lose some high-level jobs if the merged company decides to relocate the headquarters operations of Missile Systems as it is folded into a business unit of the merged company, Raytheon Technologies Corp.

Mergers often result in layoffs as operations are consolidated, but the CEOs of both companies say there is little overlap in their product and service offerings, and note that both companies are adding thousands of jobs.

Raytheon Missile Systems is in the process of a major expansion to add about 2,000 jobs here.

The planned merger would create the world’s second-biggest aerospace and defense company after Boeing Co.

The merged companies will continue to operate their current product lines, which at Missile Systems include the Tomahawk cruise missile and more than a dozen other front-line U.S. weapons systems.

Another business will be formed from Raytheon’s Space and Airborne Systems and Intelligence, Information and Services units, and UTC Mission Systems and Raytheon’s Forcepoint cybersecurity unit. Together with two of UTC’s current businesses — engine maker Pratt & Whitney and Collins Aerospace — they will form the four main business units of the merged company.

“The No. 1 question for regulators is whether this is going to reduce competition,” said Loren Thompson, chief operating officer of the Lexington Institute. “And the short answer is, product by product, there’s not much evidence of that.”

UTC makes jet engines for both commercial airliners and military planes through Pratt & Whitney and aircraft avionics and communications equipment through Collins Aerospace, which it formed from its $30 billion acquisition of Rockwell Collins last year.

To focus on aerospace, UTC is in the process of spinning off two non-aviation businesses, Otis Elevator and heating, ventilation and air conditioning provider Carrier Corp.

Raytheon is predominantly a defense contractor, though it also makes avionics and air-traffic control equipment for the commercial market.

Michael O’Hanlon, senior fellow and research director with the Brookings Institution, said the Raytheon-UTC merger is just the latest example of consolidation in the defense industry that traces to at least the 1990s, partly because of the high cost of new military technologies.

Now, it’s not unusual for the Pentagon to have just one choice in contractors bidding to supply things like aircraft carriers and tanks, O’Hanlon said.

“Nothing jumps out at me that should prevent the merger relevant to the criteria we’ve used in the past,” he said. “My guess is, this will not face major objections, but there could be something that proves me wrong.”

As Raytheon and UTC seek to wring some $1 billion in “synergy” savings from the merger, Raytheon’s Tucson operation could see some executive and administrative jobs move away if the merged company decides to consolidate headquarters to Raytheon’s Integrated Defense Systems’ home in Tewksbury, Massachusetts, for example.

The stakes are high for Tucson, where Raytheon reigns as the region’s biggest employer, with more than 13,000 employees and contributes an estimated overall annual economic impact of about $2 billion.

“I’m hoping it’s good for Tucson, and I think it should be good for Tucson,” said Mayor Jonathan Rothschild, adding he’s not too worried about massive job cuts. “Those tend to be (cuts to) administrative offices. I don’t see them moving manufacturing out of the area because they have so much investment sunk in here.”

The city has approved conditional tax incentives potentially worth $1.5 million over four years for Raytheon, based on its job growth and investment of more than $230 million in new facilities.

Joe Snell, president and CEO of the local economic-development group Sun Corridor Inc., said that despite the obvious concerns, the merger is “fraught with opportunities,” noting the companies have little apparent overlap in products and services and are in high-growth mode.

“There’s always risk associated with mergers, but people forget there are also opportunities,” Snell said. “I see this new company being a real big force, globally.”

“Of course, we would like to have the headquarters here, but we will have a lead site executive here if that happens,” Snell said, noting that Missile Systems’ new president, Wes Kremer, would be a perfect choice to lead the new business unit. “We just want to be ready to accommodate any expansions that they do have going forward.”

Kremer took the company’s reins in March after spending more than four years as president of Integrated Defense Systems. Before that, he spent several years as a program manager and product-line vice president in Tucson.

“Anything with Raytheon concerns us; they’re an important employer,” Moffatt said. “But there’s not much overlap between the two companies, and there’s no overlap with what Raytheon Missile Systems does here. I see it as a stretch that they would be moving jobs someplace else — it’s a complementary merger rather than one that’s going to see consolidation, layoffs and all that sort of things.”

Moffatt said he is concerned about current headquarters operations potentially moving from Tucson in the wake of the merger.

“In my opinion, that’s the only risk I see, and we’re going to be working hard to bring them here,” he said.

Rothschild said the city also stands ready to vie for the headquarters.

“I think we should put together that pitch, and make sure they see our advantages,” he said.

Before any final restructuring takes place, the merger deal must win approval from federal antitrust regulators, either the Department of Justice or the Federal Trade Commission, as well as from shareholders of both companies.

President Trump weighed in quickly the day the deal was announced, expressing concerns that the deal could curtail competition.

The merger deal also is facing scrutiny, and some early opposition, from Congress.

California Democratic Rep. Ro Khanna, whose Bay Area district is home to many Boeing workers, has vowed to seek congressional hearings on the planned merger.

Arizona Sen. Martha McSally, R-Tucson, who sits on the Senate Armed Services Committee, said she has asked the companies for more information about the merger and is reserving judgment for now.

“I feel confident that Raytheon, or whatever it’s called in the future, is still going to be very strong job creator in Tucson, but as we look at the defense industrial base, we have to make sure that we’ve got a robust capability to meet America’s needs,” McSally said Friday during an appearance in Tucson.

The possible negative effect on competition is “potentially part of it, but we’ve got to take a look at it,” she said.

The boards of both Raytheon and United Technologies unanimously approved the merger, but it must still win approval from shareholders holding a majority of each company’s stock.

Though it’s billed as a “merger of equals,” UTC is much bigger, with a market capitalization, or total share value, of about $111 billion and annual revenue of nearly $70 billion, to Raytheon’s market cap of $51 billion and revenue of about $28 billion.

Some big investors have already objected to the deal.

Activist UTC investor John Ackman of Pershing Square Capital has vowed to fight the merger, saying it could curtail UTC’s aerospace business and dilute the value of current shareholders’ stock.

But Pershing Square owns less than 1% of UTC’s shares.

Three major investment firms – State Street Corp., Vanguard Group and hedge fund manager BlackRock — are the biggest institutional owners of stock in each company, together owning about 25% of UTC shares and about 20% of Raytheon stock.

Chris Lamoureux, Diamond professor of finance at the University of Arizona’s Eller College of Management, said it’s not a given that shareholders will approve the merger.

He also noted that shares in both companies fell significantly the day the merger was announced, perhaps because it took both firms off the table as potential takeover targets. The shares have recovered somewhat since then.

“In terms of the likelihood of success, the time frame is long enough and there are enough contingencies — specifically the carving out of Carrier and Otis — that it is unclear,” Lamoureux said. “It’s not even obvious what effects market turmoil would have on the deal.”

Electric companies under the purview of the Arizona Corporation Commission are blocked from shutting off power to residential customers who do not pay their bills from June 1 through Oct. 15.

University of Arizona scientists have formed a new company to commercialize a new blood test that already has seen success detecting lung cancer.

Crash closes I-10 eastbound near Picacho

Interstate 10 eastbound closed in Picacho due to a crash around noon Sunday, according to the Arizona Department of Transportation.

This weekend offered a bit of a break, but temps will begin climbing again today.

A new proposal by Ajo Improvement would phase in major increases over 10 years instead of seven, but customers sewer and electric rates would go higher.

The deal to create nation's second largest defense firm is still on track to close in the first half of 2020.

United Technologies board approves spinoffs needed for merger with Raytheon

UTC was required to divest its Carrier heating and cooling and Otis elevator units as part of its multi-billion-dollar merger with Raytheon Co.

Raytheon Missile Systems is the Tucson region’s largest employer, with about 13,000 workers and an economic impact of about $2 billion.

Hughes Aircraft plant under construction south of Tucson in June 1951. It is now Raytheon Missile Systems.