On a recent Friday afternoon, while Tucsonans ate lunch at their desks, filled in potholes along East 22nd Street and went about any other number of mundane daily activities, Edward Oyarce-Solomon and Madeleine Kuebler were at their day jobs, doing something a little bit different: creating beauty through movement.

Working out of a studio with plain white walls on one end and floor-to-ceiling mirrors on the other, Oyarce-Solomon and Kuebler, soloists with Ballet Tucson, moved like poetry around the room, making their way through a series of lifts, spins and graceful, intertwining motions.

For that brief moment in time, the duo embodied star-crossed lovers, dancing a “Romeo and Juliet Pas de Deux” to the music of composer Sergei Prokofiev — a classical piece that will be performed at Ballet Tucson’s Winter Concert in February.

Kuebler, who joined Ballet Tucson in 2021, said being tapped to perform the role of Juliet was like a dream.

“It is such a timeless tale with possibly one of the most beautiful scores ever written,” Kuebler said. “It is heart-wrenchingly beautiful no matter how many times you listen to it.”

For Margaret Mullin, new artistic director for Ballet Tucson, the piece helps achieve her vision: a company that moves seamlessly between the traditional and contemporary, giving local ballet fans a chance to enjoy the art form’s past while looking ahead toward its future.

Ballet Tucson’s 2022-23 season, which starts with the company choreographer-driven “Footprints at the Fox” on Oct. 7 at Fox Tucson Theatre, is a testament to that vision.

Its Fall Concert, Nov. 11-13 at the Leo Rich Theater, touches on the classics with excerpts from the 1898 ballet “Raymonda,” choreographed by associate artistic director Chieko Imada after Marius Petipa.

But it also features “In Creases,” a work by modern marvel Justin Peck, the Tony-award-winning resident choreographer for the New York City Ballet, whose work can be seen, among other places, in Steven Spielberg’s 2021 on-screen revival of “West Side Story.”

“Justin is one of the people pushing the dial forward,” Mullin said. “He has been called the successor to George Balanchine, to Jerome Robbins. He is the next wave of that level of brilliance and creativity.”

The season will see the company performing time-honored gems, such as “The Nutcracker” with live musical accompaniment from the Tucson Symphony Orchestra in December and two Balanchine works: the Ballet Tucson premiere of “Allegro Brillante” at its winter concert and “Walpurgisnacht Ballet” at its spring concert.

But there also will be pieces by contemporary names, including Seattle-based Price Suddarth and South African-born Andrea Schermoly, currently the resident choreographer at the Louisville Ballet Company.

“It is rewarding for the audience,” Mullin said. “A lot of people end up really enjoying mixed repertory programs more than they think they will. It is a foreign idea coming in. You aren’t really sure what some of these things are. Then you get to sit down and experience this whole sample platter of dance.”

Mullin looked to the connections she made in her own career as a dancer to bring together her first season as artistic director.

Born and raised in Tucson, Mullin was trained at the School of Ballet Tucson from the age of 9 to 19. The brunt of her professional career as a dancer took place at Pacific Northwest Ballet in Seattle, where she spent 14 seasons learning works by Balanchine, Robbins, Peck and others, to perform at home and at festivals around the world.

Mullin’s passion and focus made her a favorite amongst choreographers.

“Knowing that I was a vessel for their vision, I took it seriously,” she said. “I was able to forge some amazing relationships with people.”

She tapped into some of those relationships, including her friendship with Peck, when she came back to Tucson, first as associate artistic director for the 2021-22 season. She took the reins as artistic director this past June.

“Anytime (Peck) brought a work (to Pacific Northwest Ballet), I was one of his lead dancers,” Mullin said. “He trusted me. He knows I know his vision and style. He was so supportive when I approached him about bringing a piece here.”

In addition to securing new contemporary works, Mullin has also put an emphasis on looking at what Ballet Tucson has created over the years; particularly the pieces by Chieko Imada, who has been with Ballet Tucson more than three decades and who now serves as the company’s resident choreographer.

“People love the classics that we have,” Mullin said. “I love those, too. You don’t have to ignore your past to celebrate your future. They can work hand-in hand.”

Several pieces created by Imada are spread throughout the season, including the world premiere of “Himiko” at Ballet Tucson’s winter concert, which will feature live musical accompaniment from Duo Chinoiserie, a husband-and-wife team who play the classical guitar and Chinese guzheng.

“Cheiko and I have been very close for many years,” Mullin said. “She was my teacher when I was growing up dancing. She has been my coach, mentor. Now working with each other in this capacity, it is really thrilling.”

Mullin’s direction for Ballet Tucson has been an overall positive for the company’s 30 dancers, including its Romeo and Juliet, Oyarce-Solomon and Kuebler.

Kuebler, 21, was born in Denver, trained at the Academy of Colorado Ballet, and danced for two seasons at the Colorado Ballet Company before the pandemic shut the world down.

Her focus has historically been on classical ballet. She was excited to hear about the company’s two Balanchine pieces for this season.

But she was also looking forward to experiencing some of the more contemporary works.

“The ballet and dance world is changing so much,” Kuebler said. “The audience members that I know don’t always want to see the same thing. Classical ballet is undisputed and beautiful and will never go away. But there is so much new stuff out there that is very exciting.”

Bay Area-born Oyarce-Solomon, 23, dabbled in modern dance as a student at the University of Southern California.

Having names like Suddarth and Peck on the season schedule is a big deal for him.

“Justin Peck’s piece is going to be incredible for the growth of the company,” he said. “It is very deep, contemporary ballet.”

Mullin remembers how she felt as a dancer experiencing new works.

“It is such an adventure,” Mullin said. “You don’t know what’s ahead of you, what the possibilities are going to be.”

She believes Tucson audiences will appreciate it, too, during this season and beyond.

“I hope to constantly walk that line, looking backwards and forwards at the same time,” she said.

What: Ballet Tucson's Footprints at the Fox

After a brazen theft, UA painting to have homecoming celebration

For Star subscribers: Nearly 37 years after a couple stole Willem de Kooning's "Woman-Ochre" from its frame on the Tucson campus, the priceless painting will be reintroduced at UA Museum of Art exhibit.

A DJ, a Ronstadt and a metalhead join 165 of their fellow Tucson artists in the Tucson Musicians Museum Hall of Fame.

Graciela Iturbide took up photography in the early 1970s and has been documenting, mostly in black-and-white images, the lives of Indigenous and Mexican people.

4 film festivals to catch this fall in Tucson

Travel the world, laugh, cry and think about new and different perspectives at these Tucson film festivals this fall.

So many events, so little time: Tucson fall arts is packed

The 2022 fall arts season is filled with concerts, plays and art exhibits to fit everyone's tastes and budgets.

A big list of trivia nights in Tucson, separated by weekday

Test your knowledge at these trivia nights! Pub quiz nights can be found at bars and restaurants throughout the Tucson, Arizona area nearly every night of the week.

A new basement bar is opening in downtown Tucson this fall

For Star subscribers: The owners of a popular downtown spot are making their mark on the area, with a second bar planned and a new boutique bottle shop.

Try these new foods, experiences at Tucson Meet Yourself

The annual event returns with all of the music, eats, and folk art you know and love, and some new stuff, too.

These Old Blind Dogs are bringing the 'Circus' to Tucson

The Scottish folk and Celtic group is touring the U.S. with its 14th album, "Knucklehead Circus."

Shiyeon Sung will lead the Tucson Symphony Orchestra in a concert of fairytales and firebirds.

For Star subscribers: The folks behind Borderlands Brewing are teaming with Tucson Chef Maria Mazon on another restaurant concept that will feature a speakeasy.

The musical, which feels more like a pop concert, is on stage at Tucson's Centennial Hall and has a big youthful following.

After selling her soul to the devil, a woman is determined to do good in the world in the Scoundrel and Scamp production of "Faustus: That Damned Woman."

This Tucson record show will have thousands of albums for sale

Sellers from across Arizona will have albums ranging from classic rock to jazz to hip-hop.

Arizona Arts Live was among the commissioners for the film, which connects sounds to the human experience through a host of famous and not-so-famous characters.

What to expect from this year's All Souls Procession in Tucson

Theatrical and dance performances, live music and elaborate visuals are planned for the annual Tucson event that honors loved ones lost.

Learn how to properly wear a kilt, try some Welsh baked goods and enjoy Celtic rock at the Tucson Celtic Festival and Scottish Highland Games.

Dance Theatre of Harlem, UA Dance and Ballet Tucson all have concerts through Sunday.

Red Wolverton has had roles in more than 100 films and was heavily involved in the Southern Arizona film industry during its heyday.

"The Wickhams: Christmas at Pemberley" opens in Tucson for three-week run through November.

Tucson holiday concerts, events to put you in a ho-ho-ho mood

There's pop shows of all shades, a play that takes us back to Pemberley estate and the wartime musical "All is Calm" heading to Tucson stages this holiday season.

Two bands from across the pond play Tucson on Saturday

Watch The Longest Johns at 191 Toole or head down the street to the Fox to watch the traditional Irish band, Altan.

Moves in a Minute: “The Fabelmans” 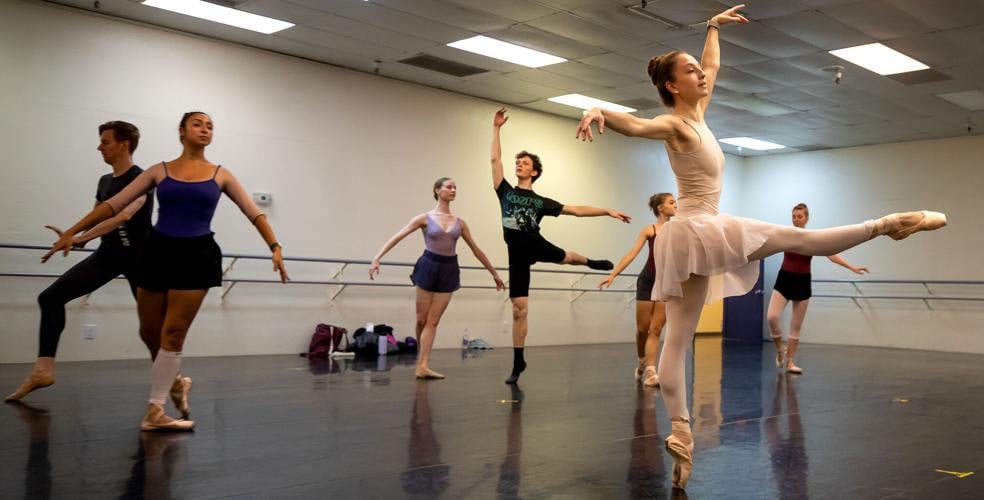 Danielle Cesanek, right, practices with fellow dancers during the beginning of their rehearsal for Ballet Tucson's season opener showcase "Footprints at the Fox" at Ballet Tucson. 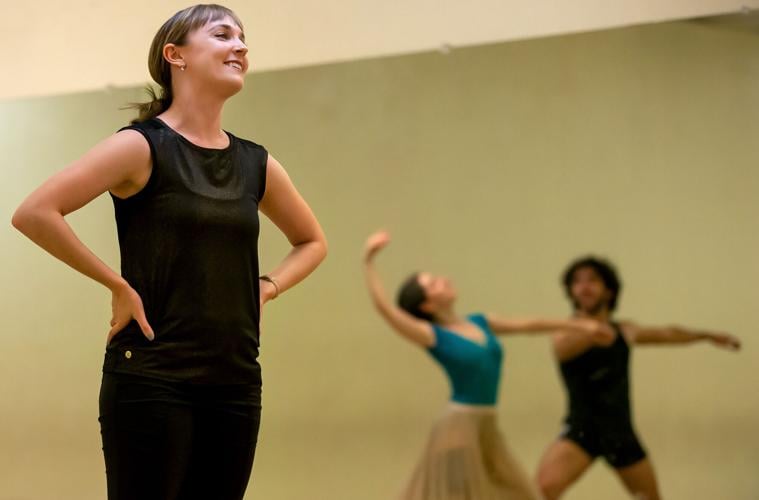 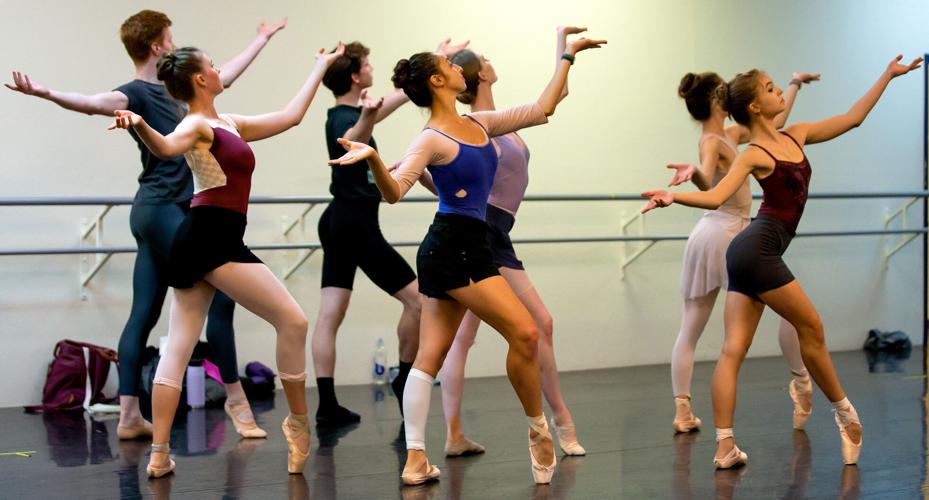 Francesca Poznanski, center, practices with fellow dancers during the beginning of their rehearsal for Ballet Tucson's season opener showcase "Footprints at the Fox" at Ballet Tucson. 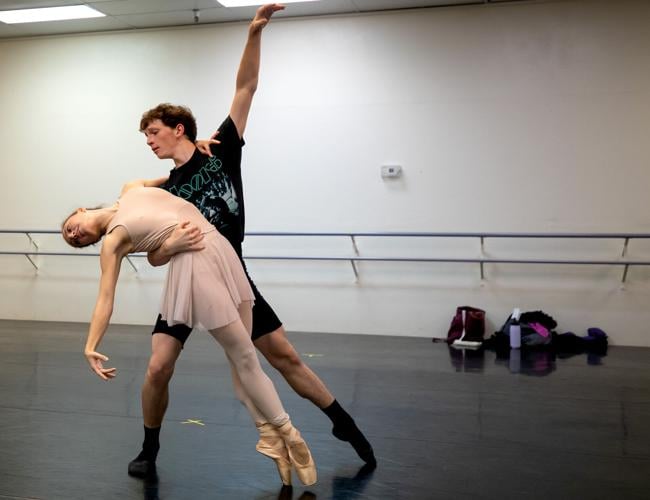