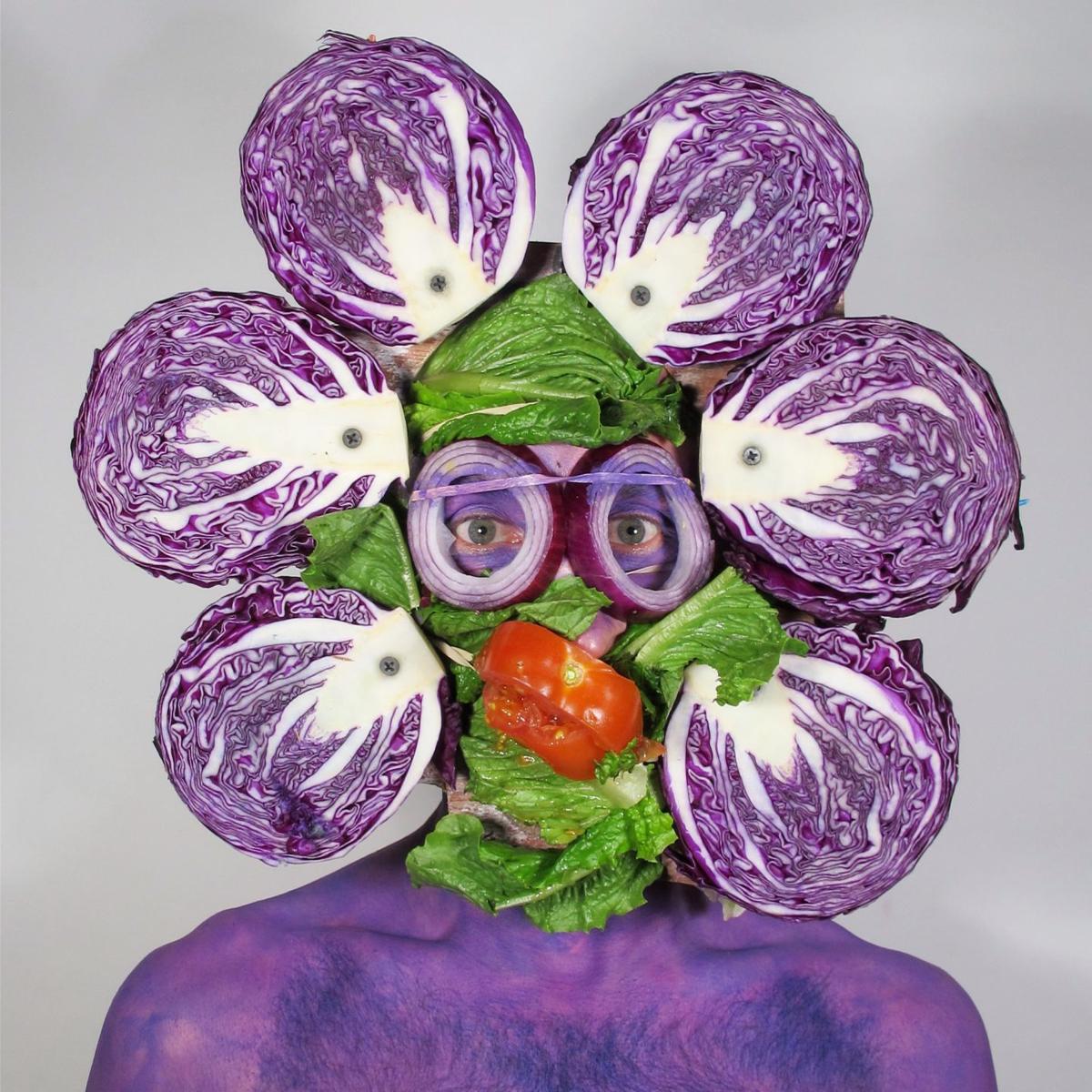 Schitzo Salad, a wearable food-based kinetic sculpture by artist David Henry Nobody Jr. The food is attached to the body of the performer. 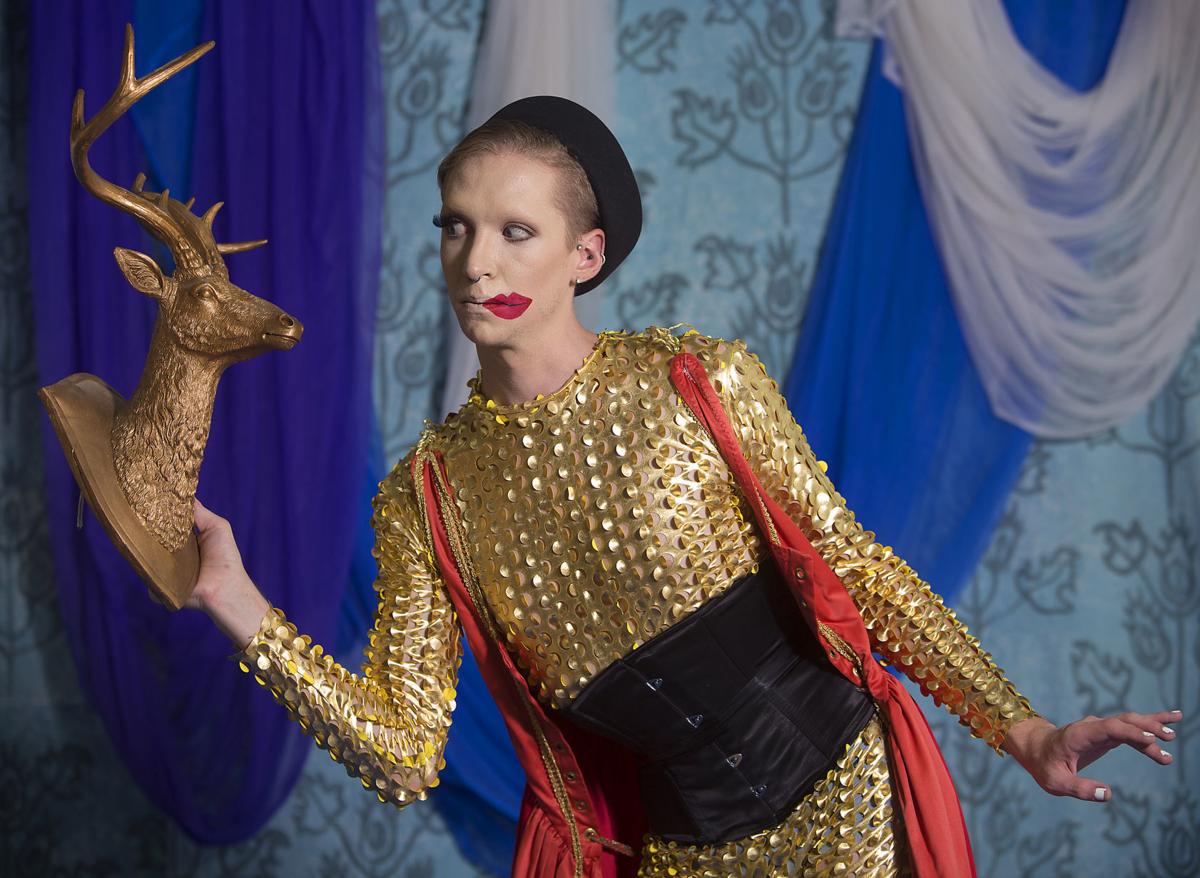 Sarah Catherine, a drag queen, dresses in her interpretation of surrealism at the Museum of Contemporary Art. The upcoming dinner event “will be a mix of highbrow and lowbrow, everything from burgers and a whole roast pig, to hot dogs and a human-shaped cake,” says the museum’s Ginger Shulick Porcella. 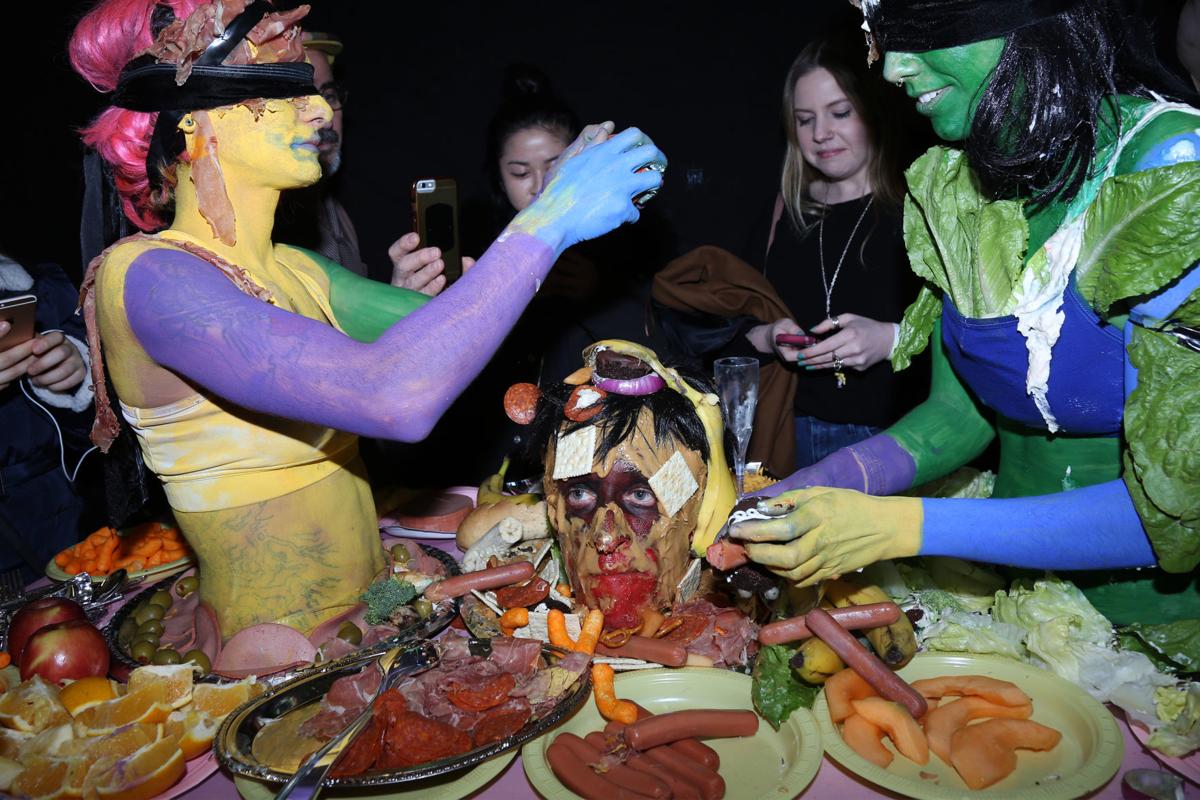 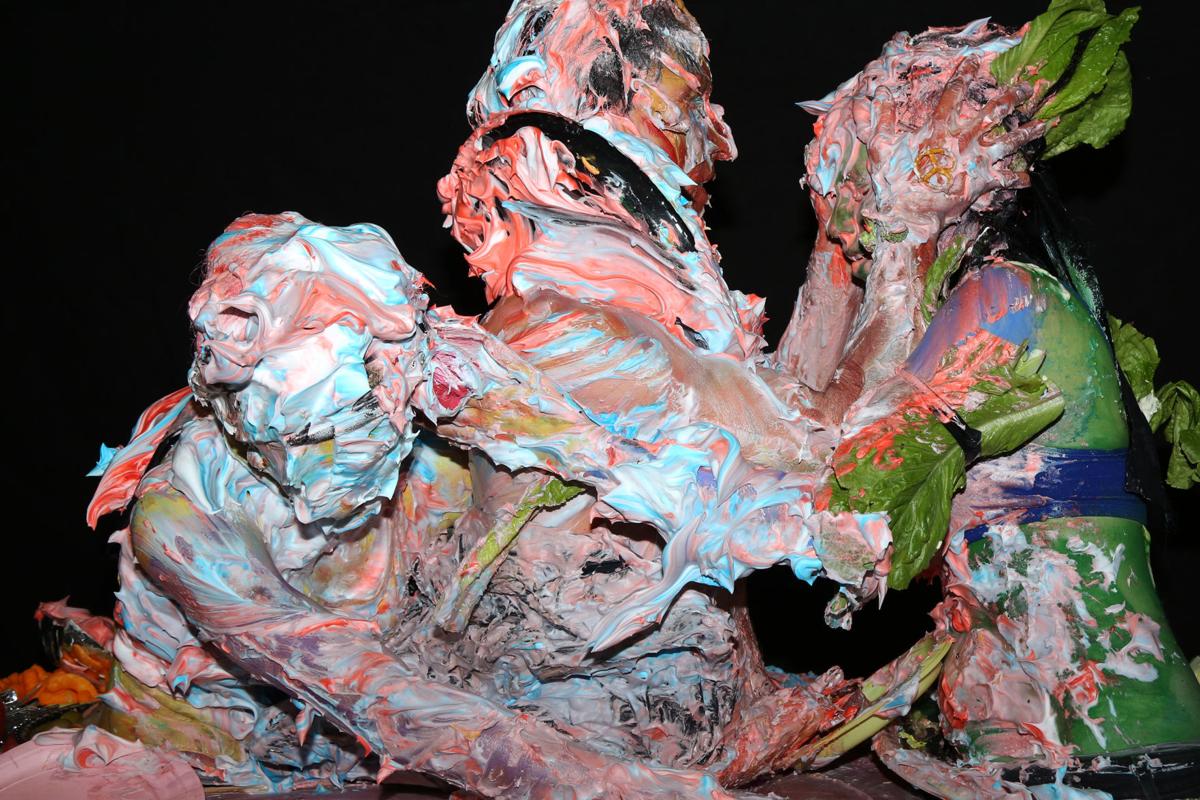 By Ann Brown Special to the Arizona Daily Star

Salvador Dalí and his wife, Gala, served fish plated inside satin slippers at one of their opulent, outlandish, sensual dinner parties.

The surrealist artist chronicled the legendary dinners in a 1973 cookbook with 136 avant-garde recipes and rich illustrations, “Les Dîners de Gala,” which was reissued in 2016. The cookbook is the inspiration for the Sept. 8 Museum of Contemporary Art Tucson fall fundraiser — Surrealist Dinner Party.

MOCA’s great hall will be a platter heaping with food, fashion and frivolity.

“The entire event will be food as art, and art as food,” says Ginger Shulick Porcella, the museum’s executive director and chief curator.

“There will be very surreal food, though all very edible,” says Porcella. “The event will be a mix of highbrow and lowbrow, everything from burgers and a whole roast pig, to hot dogs and a human-shaped cake.”

It is not a formal sit-down dinner, Porcella says. Guests can interact with food and artists, play games and dance.

The fall fundraiser pushes boundaries in fun, playful ways, says Alexis Page Smith, the museum’s director of culture and administration. It aims to be provocative, yet engaging and accessible.

“There will be pop-up performances throughout the night by David Henry Nobody Jr., who will be curating a 15-look fashion show out of wearable food-based kinetic sculptures,” Porcella says.

Foods will be physically attached to the human body/performer and may be set in motion by motors or motorized toys, says David Henry Brown Jr. At the event he will assume the role of David Henry Nobody Jr., “the name of my character who is the creative and shapeshifting force on @davidhenrynobodyjr on Instagram.”

“There will be live spontaneous creativity happening right on the red carpet, in front of the audience,” Brown says. “It will be transformative and radically transgressive.”

Guests are being asked to dress in surrealistic costumes or expressive outfits. Any outfit, hat, hairstyle — fun, funky, gaudy, simple, sweet, weird or whatever — that guests feel comfortable in will be appropriate.

That could be a Dalí-like thin, curled mustache or an outfit covered with melting clocks, reminiscent of Dalí’s 1931 “Persistence of Memory,” or a bowler hat and an apple in the face, reflective of Rene Magritte’s “The Son of Man.” You get the drift.

Surrealism allows one to step outside the self, says Smith.

Surrealism emerged in the early 1920s. It expresses the subconscious and dreams, and whisks ordinary objects out of their usual places or away from their everyday functions and plops them in unusual spaces and juxtapositions. Surrealism rises from the unexpected and aims to evoke emotions or new perspectives.

Surrealism shows that things are not what they seem, says Angela Kapp, a business adviser and MOCA supporter. Kapp, who volunteered to dress for photos prior to the event, will be decked out for the dinner but hasn’t decided on her outfit.

The surrealist dinner is also a “chance to introduce people to who we are,” as well as build community, says Porcella. Participants of three previous fall fundraisers, which had different themes, have told her it was the “best time ever” and a “transformative experience.”

The fundraiser is aimed at engaging a younger audience, says Porcella. The spring gala is the museum’s more formal tux-and-gown event.

A hot-dog eating contest and music by Tucson’s The Pork Torta are also on the menu. Seis Kitchen will provide the food, and Barrio Brewery is donating beer, says Smith.

About 250 people are expected at what Porcella says will be an edgy party.

Ann Brown is a former Star reporter and editor.

Nobody plans to play with food

David Henry Brown Jr. might have egg — or peanut butter and cheese — on his face during MOCA’s fall fundraiser.

And there might be cabbage on his head and onions on his eyes.

Brown, who assumes the persona of David Henry Nobody Jr., is a New York-based performance artist who uses his body as one of his mediums. He will present “Edible Wardrobe Malfunctions” at the Sept. 8 event.

While Brown’s work may seem silly and frivolous on the surface, he aims at taking deep dives into serious social issues.

Brown’s different artistic periods have included stalking Donald J. Trump in 1999, in a performance art role of a “conservative, run-of-the-mill white guy” for a year during which he ingratiated himself to Trump and his inner circle.

Brown attracted national attention and notoriety when he impersonated socialite Alex Von Furstenberg in 2000, crashing parties, and meeting and mingling with the rich and famous. Brown documented his experiences in an exhibit of about 60 photographs shot with 35mm point-and-shoot cameras handed to nearby strangers.

Most recently, his work has played out in visual-collage selfies on Instagram, titled “Resemblagè”. His pieces slam Instagram clichés, stereotypes and an image-obsessed society, Brown says. “Resemblagè,” is a word he coined combining the words “resemble” and “collagè.

“It means physically collaging, painting upon the body and face,” he says. “I view 'Resemblagè' as a portrait of person, turned inside out, in real life. It exposes our irrational and animal selves. It is how people look in my bizarre dreams.”

Brown says he carries the name of Nobody because of his philosophy of the Fantastic Nobody (a loser who acts like he or she is famous but who is not) that has pervaded his work for the last 25 years. It is also a nod to the Fantastic Nobodies, a five-person performance/conceptual art collective which he was part of for more than a decade.

In the context of this body of work, however, “Nobody means, not having a body,” says Brown. “I feel that when we are on our phones on the web, you are just consciousness with no body.”

At the MOCA fundraiser, David Nobody will be presenting a live fashion show of his Instagram looks taken to full body. “The performance will be surreal and full of sudden curveballs and surprises,” he says.

He says he’s attracted to junk and fake foods because “they are the byproduct of brainwashed corporate advertising campaigns.”

“They are also very, very visual being that they are entirely engineered to play into human desire.”

He says he uses healthy foods sometimes. “I am interested in how we as humans are part of the food chain.”

Overall, Brown says the outcome of the performance is ultimately unpredictable. “I am taking art off of the canvas and into life itself.

“It will also be just really, really fun. I want to play like a child, with the performers and the audience.”

Ginger Shulick Porcella has been executive director and chief curator of the Museum of Contemporary Art Tucson a little more than a year. She talks to the Star about what's been done and what she hopes to do.

Liven up your yoga routine with these 5 unique Tucson classes

Tucson yoga studios have gotten creative with their offerings.

“Les Miz,” which is coming to Centennial Hall, was first produced in Paris in 1980.

Brandi Milloy-Simon, who grew up in Sierra Vista, brings her love of food and storytelling to national audience.

Rock legend Joan Jett is coming to Tucson on September 2

Looking for something to do this Labor Day weekend?

Aarthi Jude, 30, hopes to turn fabric from her grandmother’s saris from India into household and clothing items.

The new MOCA executive director doesn't want people to feel like they don't "get" the art.

Center for Creative Photography shows 80 images from its extensive collection.

Schitzo Salad, a wearable food-based kinetic sculpture by artist David Henry Nobody Jr. The food is attached to the body of the performer. 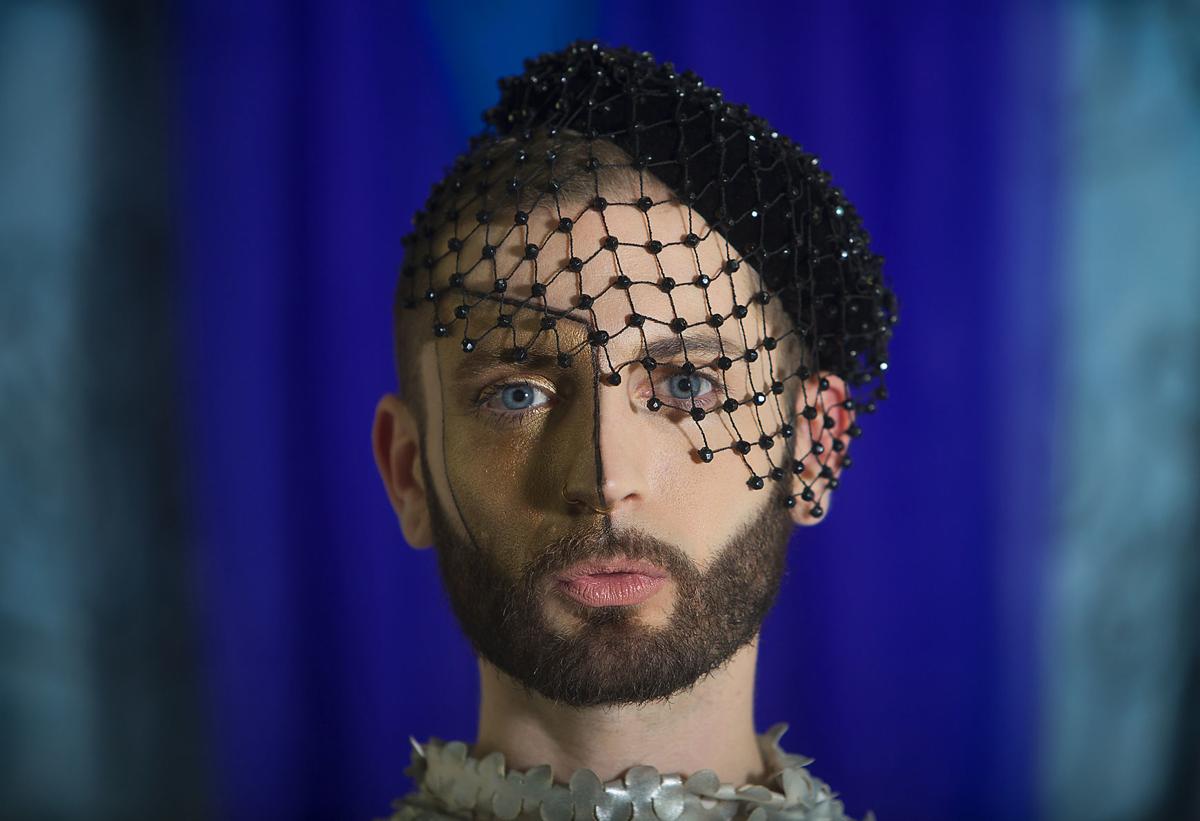 Topeka Bodega, a Tucson drag queen, dresses in her interpretation of surrealism for a portrait at the Museum of Contemporary Art, 265 S. Church Ave. The fall fundraiser gala on Sept. 8 is inspired by the Salvador Dali cookbook, “Les Diners de Gala.” The cookbook features avant-garde recipes from the dinner parties Dali hosted with his wife.

Sarah Catherine, a drag queen, dresses in her interpretation of surrealism at the Museum of Contemporary Art. The upcoming dinner event “will be a mix of highbrow and lowbrow, everything from burgers and a whole roast pig, to hot dogs and a human-shaped cake,” says the museum’s Ginger Shulick Porcella. 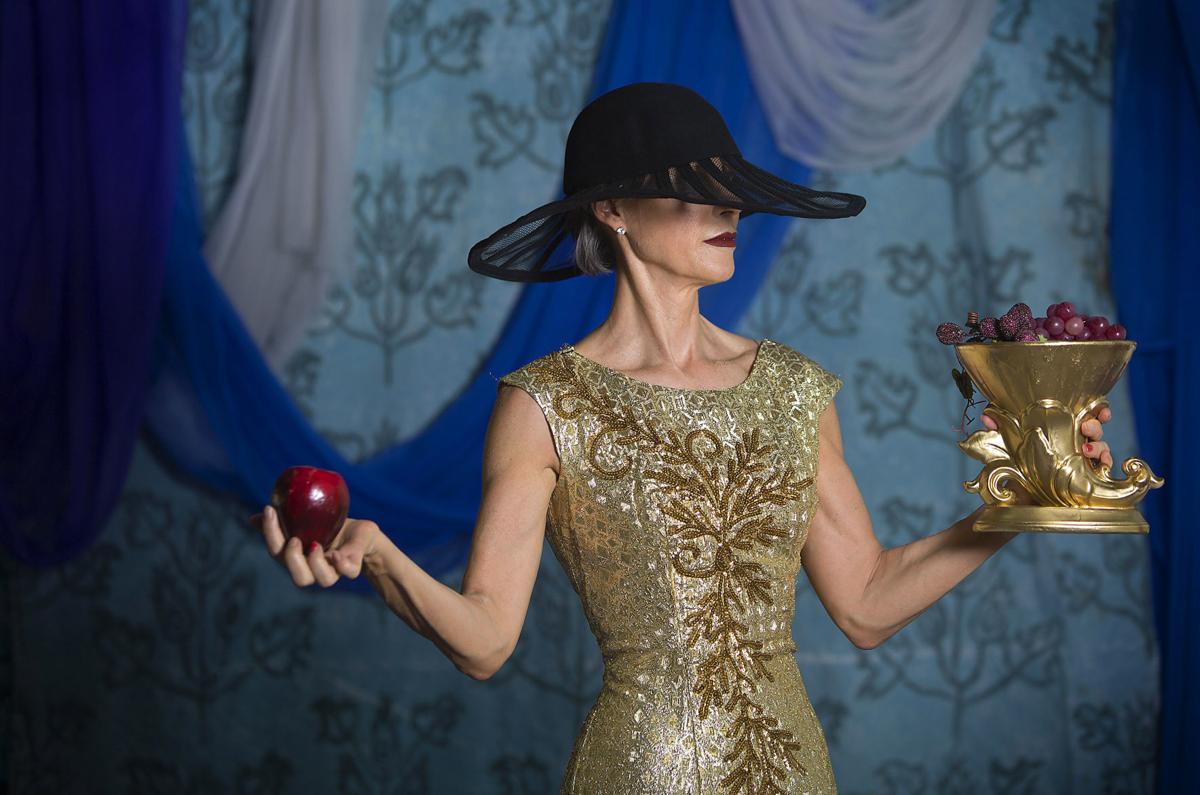 Angela Kapp, a MOCA member, says surrealism shows that things are not what they seem. The event will include a hot-dog eating contest and music by Tucson’s The Pork Torta. Seis Kitchen will provide food and the beer will be courtesy of Barrio Brewery. 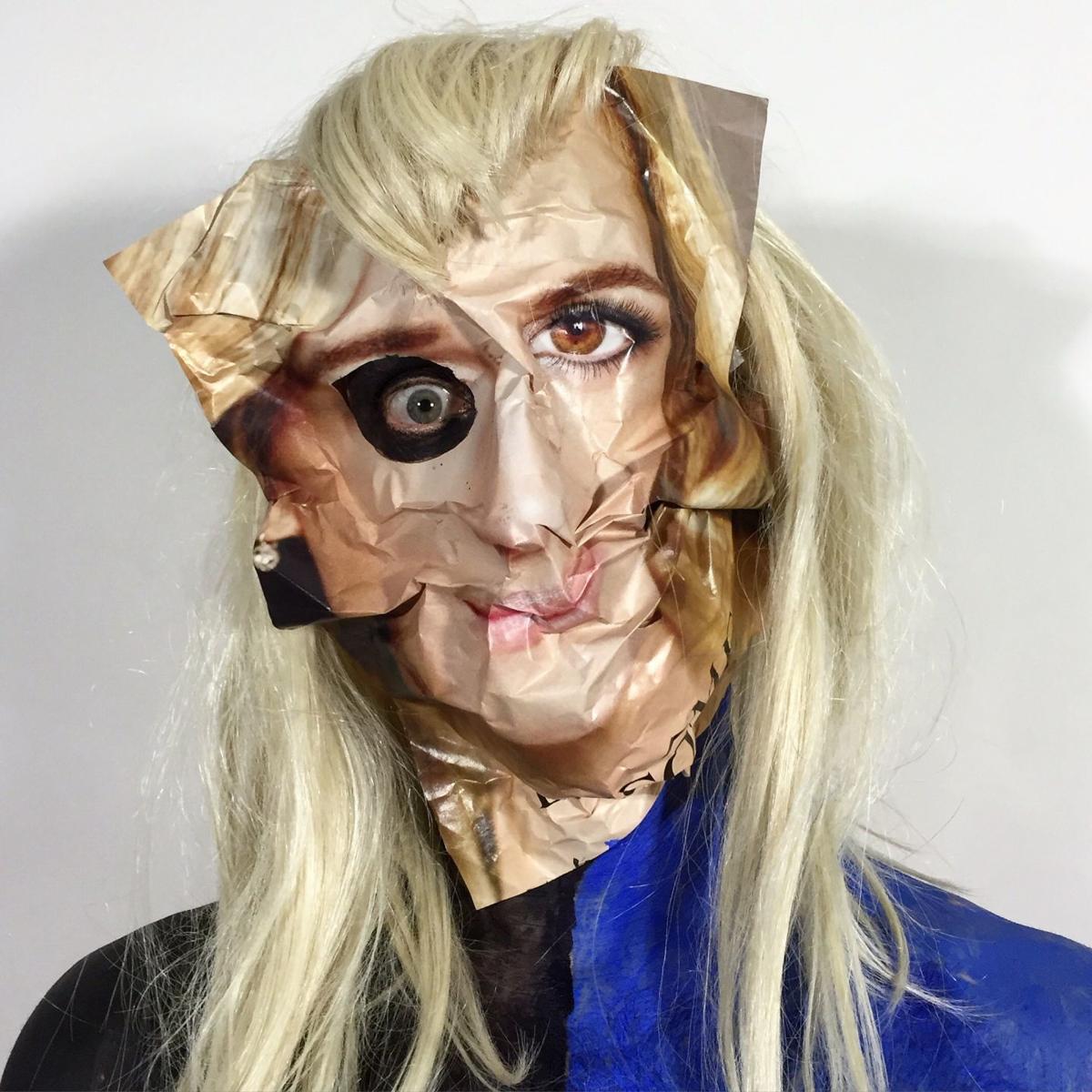 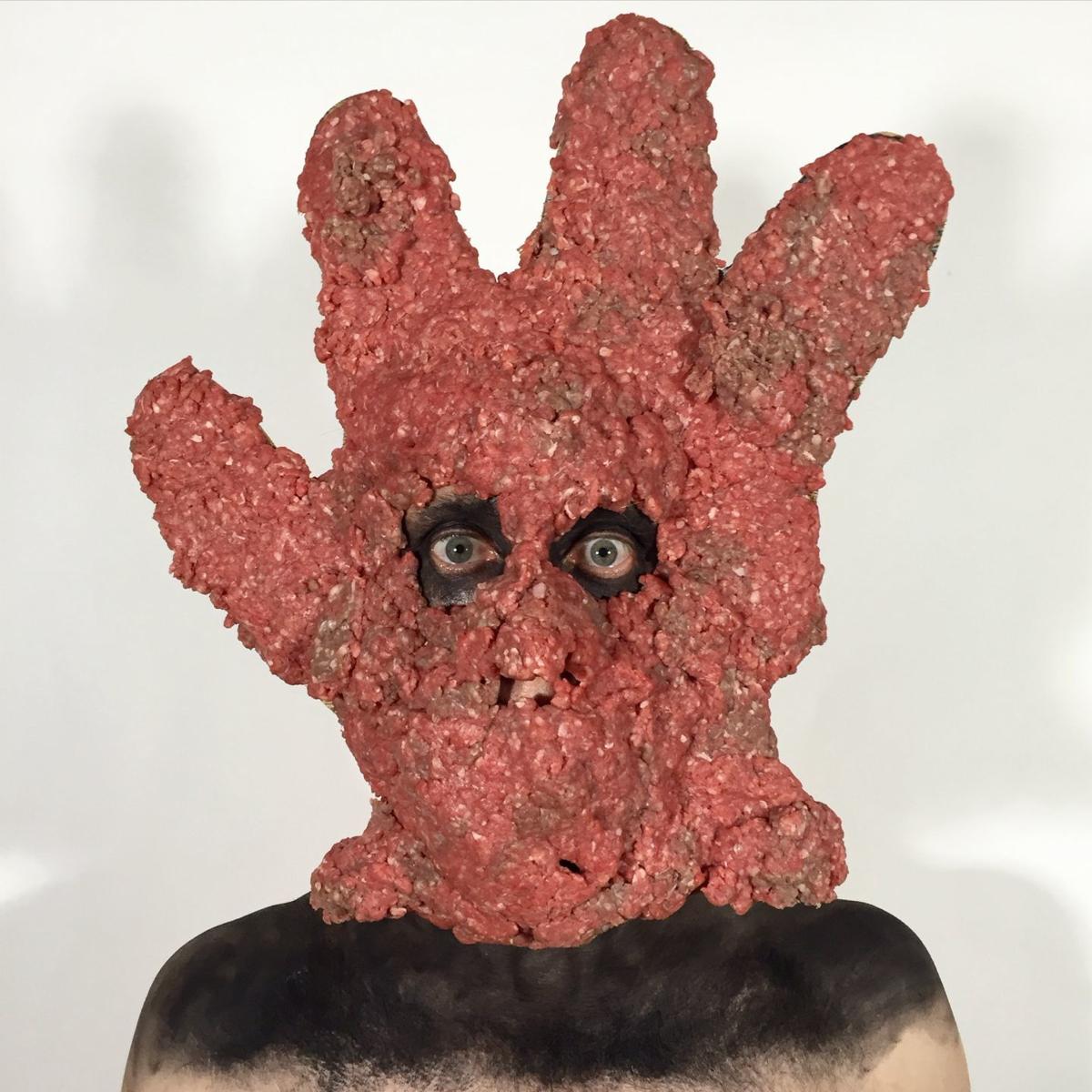 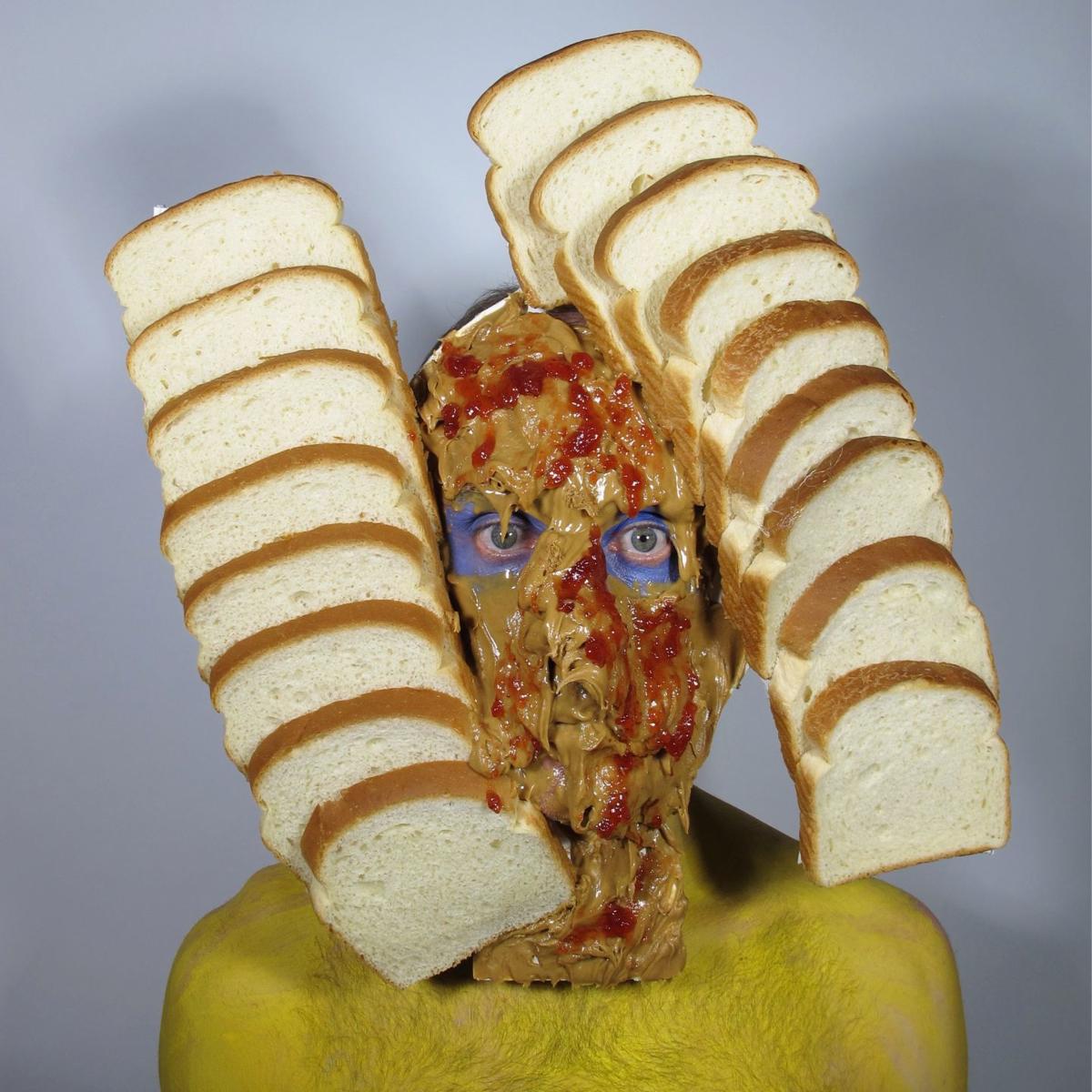 PB+J Is My Jam, a food-based kinetic sculpture by artist David Henry Nobody Jr.