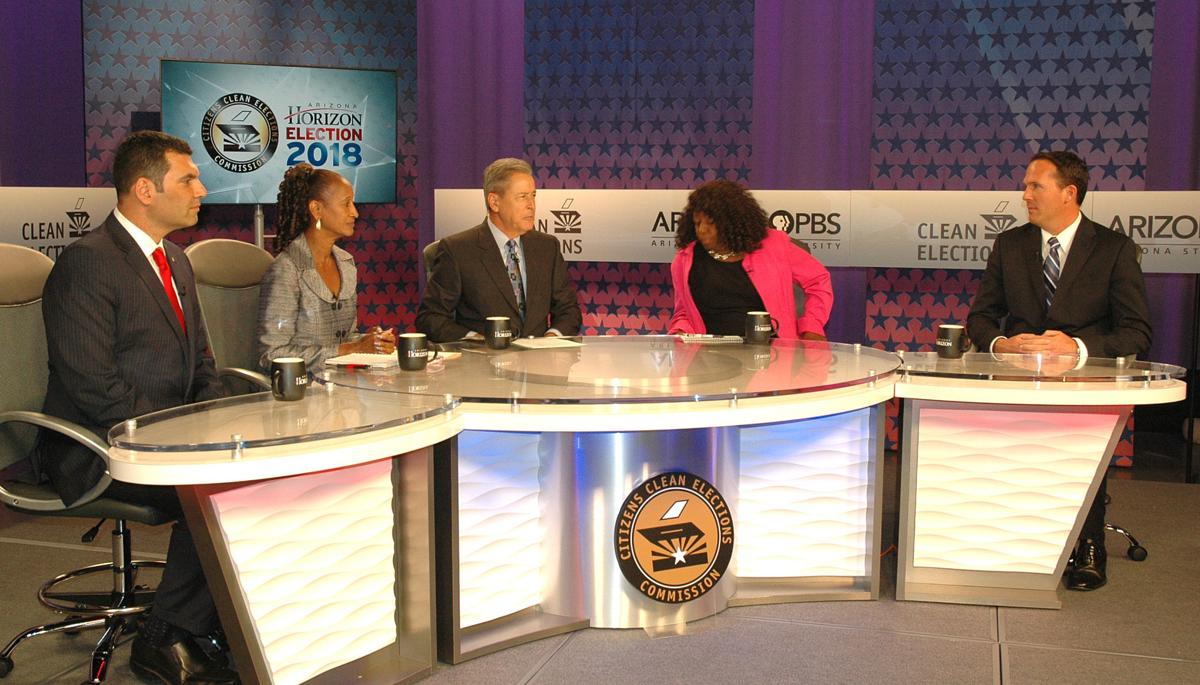 Arizona Corporation Commission candidates Rodney Glassman, Sandra Kennedy, Kiana Sears and Justin Olson debate in Phoenix. In the center of the photo is Ted Simons, host of the Horizon show who moderated the debate. 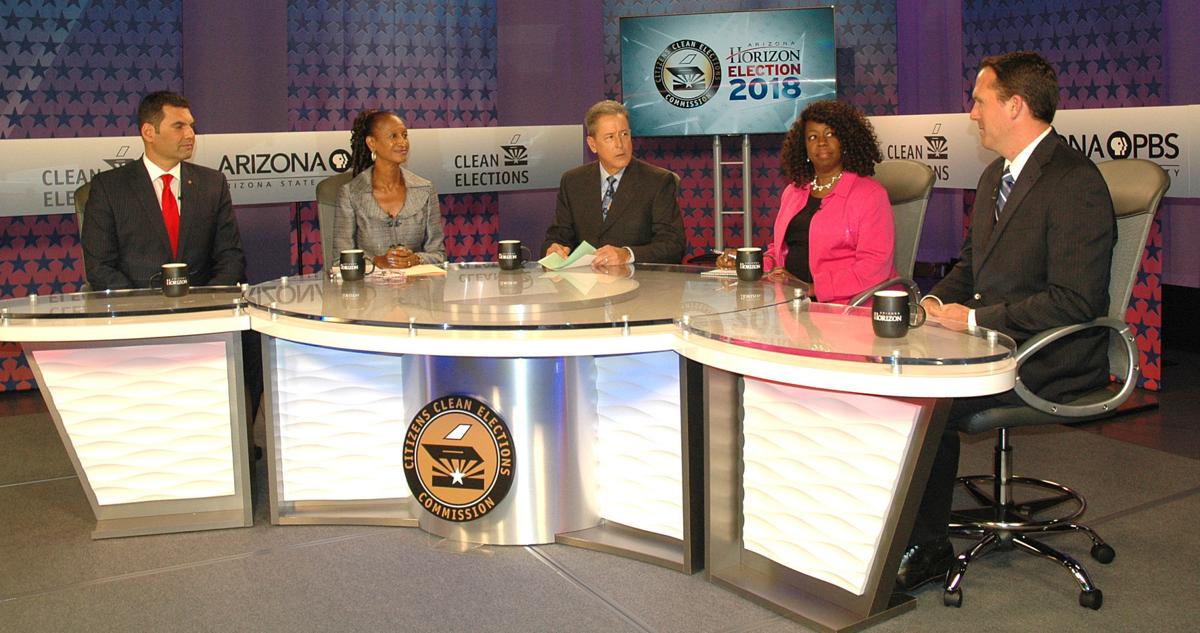 PHOENIX — Democrat Sandra Kennedy said in an ACC candidates’ debate Thursday there would be no need for voters to impose a renewable-energy mandate if state utility regulators did their jobs.

Kennedy, one of four contenders for two seats up for grabs on the Arizona Corporation Commission, said she supports Proposition 127. That measure on the November ballot would require utilities regulated by the commission to generate 50 percent of their electricity from renewable sources by 2030.

That would override the standard set by the commission of 15 percent by 2025.

“The renewable-energy standard has been stalled for more than a decade,” said Kiana Sears, the other Democrat in the race and a former commission staffer. She said the Republicans who have controlled the panel since that time, and now have all five seats, have failed to revisit and revamp it.

Both Republican contenders, Justin Olson who was appointed to the commission last year and attorney Rodney Glassman, oppose the initiative.

“This is a mandate that wasn’t even written by Arizonans,” Glassman said, pointing out it is being advanced by Californian Tom Steyer, whom he called a “leftist billionaire.” He argued — as has utility Arizona Public Service Co., which is financing the opposition — that the mandate would double and possibly triple what customers pay for electricity.

“That is a facade,” Sears responded.

“We know that solar energy costs less,” she said, citing costs as low as 2.5 cents per kilowatt hour versus double that for carbon-based sources.

Olson agreed that the cost of solar has plummeted so much “that it actually is the most cost-effective way of generating electricity — while the sun is shining.”

“The problem is that folks get home from work and the sun fades below the horizon and they still have an expectation that when they turn on the switch that the lights are going to come on,” he said.

Olson acknowledged the developments in battery technology to store what is generated during the day. But he said that when you add the current cost of those batteries, solar loses its financial edge.

He said Arizonans should take a lesson from the record in California, where he said electric rates are 50 percent higher than here.

Kennedy said she’s not buying the argument that the initiative would mean higher rates.

“It’s propaganda,” she said. “It’s the same propaganda that APS is spewing.”

She said surrounding states not only have more aggressive renewable standards than now exist in Arizona but are increasing them.

But Glassman said there’s more to that story.

He said that California, which already has a 50 percent renewable energy mandate, generates so much power in the middle of the day from solar it is paying Arizona utilities “to take that solar off their grid.”

“Their failed policies in California have created excess supply to our benefit,” Glassman said. “And so I do not support giving up our economic development competitive advantage by putting these mandates forward.”

Kennedy, who served for four years as a commissioner from 2009 through 2012, said the initiative was born out of frustration with the standards not having been revisited since the current version was adopted in 2006.

“If the commissioners were doing their jobs, the people of this state would not be going to a ballot measure,” she said, saying 80 percent of people want renewable energy. “Why can’t Arizona be the solar capital of the world?”

All four contenders did agree on one key point during the hourlong debate on KAET-TV, the Phoenix PBS affiliate: There is low voter confidence in the current commission.

The panel came under public scrutiny most recently with the indictment of former Commission Chairman Gary Pierce on charges of being bribed by the owner of Johnson Utilities. A jury split 7-5 to acquit and federal prosecutors chose not to retry the defendants.

Kennedy said she was on the commission when the panel first approved a change in rates for the water and sewer company, saying the plan had “some teeth” to ensure adequate customer service. It was only after the panel became an all-Republican affair, she said, that Pierce moved to revisit the case, removed the restrictions “and gave Mr. Johnson everything that he wanted.”

Debate moderator Ted Simons pointed out it also was the all-Republican commission that voted to allow APS to raise its rates, a move that has provoked an outcry and a call to revisit the approval after many customers found their bills had gone up far more than had been advertised.

But Olson, who was not on the commission for that vote, said what happened in the past should not deter voters from putting him back on the commission and electing Glassman, a move that would keep the panel under GOP control.

Olson also pointed out that he attempted to get the commission to adopt some strict rules, including a ban on accepting donations from regulating utilities. But Kennedy noted the majority of the panel refused to go along and yet Olson supported what was left.

He countered that it would make no sense to oppose some new restrictions just because he didn’t get everything he wanted.

Glassman, for his part, said he has proposed that the commission live under the same rules that govern judges who must recuse themselves if any party in an issue that comes before them has been a contributor.

Simons, however, noted the fact that under Arizona law utilities can simply give money anonymously to third parties who in turn can wage political campaigns to elect the regulators they want.

That is precisely what APS was accused of doing in the 2014 campaign when outside groups put $3.2 million into electing Republicans. APS will neither confirm nor deny it was the source of those funds.

PHOENIX — Secretary of State Michele Reagan found herself unable to hold onto her office Tuesday night, after spending the campaign defending …

Primary candidates all say they want to restore integrity to a regulatory panel rocked by scandal in recent years.

Arizona Public Service details how it spent $10 million on elections

The report does not disclose information about spending on the 2014 race.

With a renewable energy initiative ready to be filed next week, regulator is filing proposal which electric companies are likely to find more attractive.

All 12 jurors told judge Tuesday they were "hopelessly deadlocked'' in efforts to reach a verdict in case involving ex-Arizona utility regulator.

The group's ire is over wording the Attorney General's Office added to the description of Prop. 127 that will appear on the ballot.

Proposition 127 becomes the most expensive ballot fight in Arizona history

Some $18 million has been spent in support and nearly $22 million against the renewable energy measure so far.

Group will try to counteract big campaign spending by the state's largest utility.

Arizona Corporation Commission candidates Rodney Glassman, Sandra Kennedy, Kiana Sears and Justin Olson debate in Phoenix. In the center of the photo is Ted Simons, host of the Horizon show who moderated the debate.