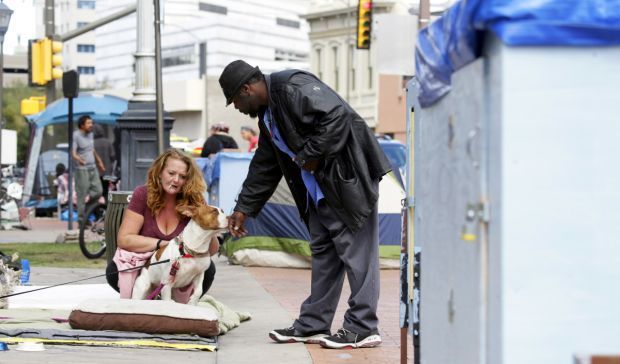 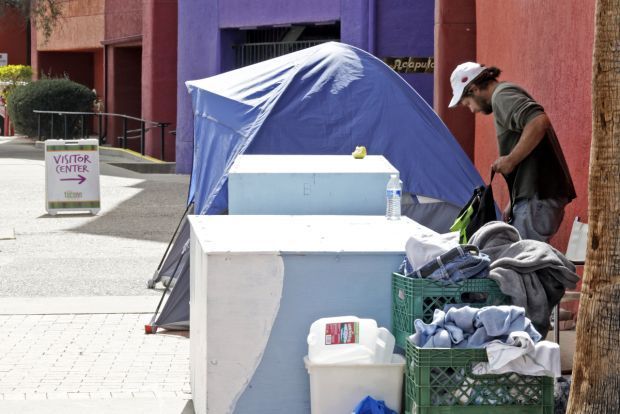 Plywood pods and a tents for the homeless are lined up near a sign for a visitor center along the La Placita office complex on Church Street in Tucson.

The city will look for a new site for the ongoing “protest” that has homeless people living in plywood boxes and tents on the sidewalks downtown.

The City Council voted Tuesday to find a new place for the people living in and around Veinte de Agosto Park, and to explore a new urban-camping ordinance modeled on a Denver law. The new law could prevent camping on public property.

Neither the cost of a new location, nor where the money will come from, was discussed.

“While the city is doing all it can to maintain safety and sanitary conditions during the protest, it is clear that we need to work on both a short-term and long-term solution,” City Manager Martha Durkin told the council.

The city already spends $16 million on services for the homeless, and has offered services at Veinte de Agosto Park, she said.

However, the 3,100 beds in Tucson homeless shelters are mostly full, with only 35 beds open Monday night, she said, and demand outweighs supply for places for couples, people with pets, and addicts.

As part of the short-term solution, Councilwoman Regina Romero is talking to the Salvation Army about a possible new site. No details on when or where were given.

Jon McLane, an organizer of the encampment dubbed Safe Park, said he’d prefer several new sites, one in each city ward and each with bathrooms, to avoid overcrowding.

Durkin said the city staff will continue to monitor activity at the park and enforce laws. Representatives from the Downtown Tucson Partnership again asked the council to step up police presence at the site.

To get started on a long-term solution, the council directed staff to draft a new ordinance about urban camping. They selected a Denver law as a model for what they’d like to see in Tucson, and they also reviewed ordinances from cities in Idaho and California.

Council member Steve Kozachik said he likes the Denver model because it states homelessness is not a crime while addressing conduct.

If the 3-year-old Denver policy were in place in Tucson, a person would not be allowed to have a plywood pod in the public right of way, Kozachik said.

The Denver ordinance defines “camping,” but it also details questions that a police officer would have to ask a homeless person before removing him or her from a campsite. Those include whether the person needs medical or social services. And the Denver model includes a number of warnings before a person may be arrested.

McLane warned any new laws that seem to target his group could result in more legal action. The group has an ongoing lawsuit against the city, accusing police of violating their free-speech rights. A federal judge ruled the protesters can stay on the sidewalk.

McLane said the current Tucson city ordinance is good, and that his group is “occupying” the sidewalks in a round-the-clock protest, which includes activities like camping.

He said he loves living at Veinte de Agosto Park.

“You have a handful of people here that live at Safe Park, and they certainly like it a thousand times better than just sleeping in a sleeping bag and a blanket and a pillow on the sidewalk,” he said.

“It’s a protest against the criminalization of houselessness,” McLane added. The city makes it a crime by making it so there’s nowhere to sleep or go the bathroom between the hours of 10 p.m. and 7 a.m., making it against the law to feed people without a permit, and citing houseless people for trespassing on public property.

The city has a hearing next week on a motion to clarify the federal court order of what is allowed on the sidewalks, and it has filed an appeal of the ruling limiting police enforcement with the Ninth Circuit Court of Appeals.

A walk through #SafePark in Downtown Tucson

See the "dream pods" and tents at the protest sites along Broadway, Church Avenue and Congress Street

Tucson is making incremental progress, but we need to move faster.

Efforts to help them find jobs and housing are mostly rebuffed.

Plywood pods and a tents for the homeless are lined up near a sign for a visitor center along the La Placita office complex on Church Street in Tucson.