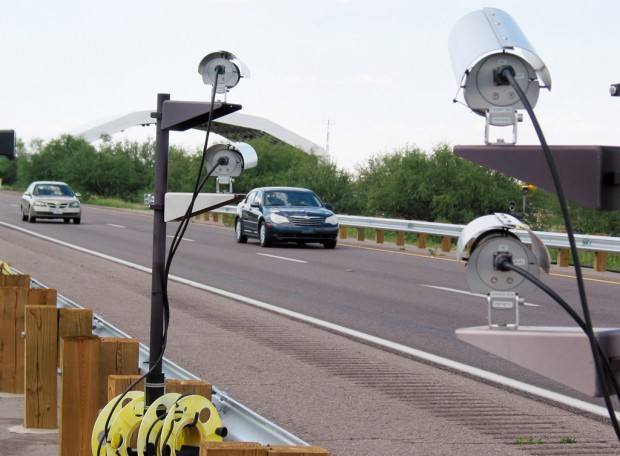 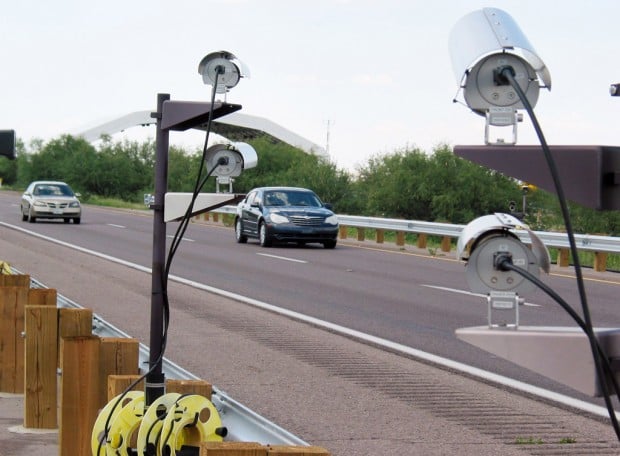 When you drive the highways of Southern Arizona, the government may be taking a picture of your license plate, recording where you were and when.

The U.S. Drug Enforcement Administration has installed automatic license-plate readers along Interstate 19 and uses them along other highways, like Arizona 86. Some local agencies in Arizona, such as Tucson police, also sometimes use readers in patrol cars.

The agencies using the devices say they are largely for detecting stolen cars and drug loads, and that information on innocent vehicles goes nowhere. But some people worry that the readers are ripe for abuse.

"They take pictures of everyone who goes past the camera," said Anjali Abraham, public policy director for the American Civil Liberties Union in Arizona "Everybody's sharing in this pool of information about us, about how we move around in our day. It's being accessed at all levels of government, perhaps quite easily."

For residents of the border area, the readers are just the latest element of surveillance added to daily life, along with checkpoints on the highways, sensors in the ground and drones in the air.

Last week, the ACLU filed public-records requests in 38 states seeking detailed information about how law enforcement agencies are using the license-plate readers and the data they collect. In Arizona, the group filed requests with the Tucson, Chandler and Phoenix police departments, as well as the Pinal County Sheriff's Office and the Arizona Department of Public Safety.

However, the DEA may be the most visible user of the readers. The agency has installed one set of equipment along southbound Interstate 19, just south of the Border Patrol's checkpoint at kilometer 40. It's a set of a dozen devices that look like cameras and lights on stands, powered by a generator attached to a trailer.

"We cannot provide specific locations of the scanners, only that they are located in the Southwest border states including Arizona; doing so can potentially compromise ongoing investigations and threaten the safety of our agents and the public," a DEA spokeswoman, Special Agent Ramona Sanchez, said in an email.

License-plate readers "are used to monitor and target vehicles commonly used to transport bulk cash and illegal contraband along U.S. interstates," she wrote. "They promote information sharing and coordination" through a mechanism that notifies authorities when common links between investigations are identified.

The DEA has also used clusters of readers along Arizona 86 and other highways on the Tohono O'odham Nation, an area frequented by smugglers.

A Tohono O'odham spokesman did not return emails seeking comment.

The DEA has reduced the length of time that it keeps the information collected from two years to 180 days, an agency spokesman told the California Watch news agency last month.

Tucson police don't retain any of the information collected by the readers they use, said Sgt. Maria Hawke. They use readers as part of an auto-theft task force operated by Arizona DPS, often by driving through apartment-complex parking lots and checking for stolen cars.

"What essentially happens is the reader is a mechanism used to do those queries. The reader doesn't retain the information," she said.

Members of a group that raised concerns about the Border Patrol's checkpoint on I-19 were not especially worried about the privacy considerations involved in license-plate checks, said Rich Bohman, president of the Santa Cruz Valley Citizens Council. They were more concerned about the lights used with the scanners at night, because they can distract drivers, especially elderly ones, Bohman said.

"From my own personal standpoint, if this is effective in helping stop money and guns from traveling into Mexico, I think our citizens would support it," he said.

There is some public resistance to license-plate readers. In June, public protests forced the DEA to drop a proposal to install readers along Interstate 15 in southwestern Utah.

But things like this are just the way of the future, said David Shirk, director of the Trans-Border Institute at the University of San Diego.

"Governments and law enforcement have so much capacity today, thanks to technology, to monitor our every day movement," Shirk said. "To me, license plate readers on freeways is the least of our problems.