Read Today's E-Edition
Share This
Tim Steller's Friday Notebook: Time for Arizona senators to stand up to Trump
Share this
1 of 2 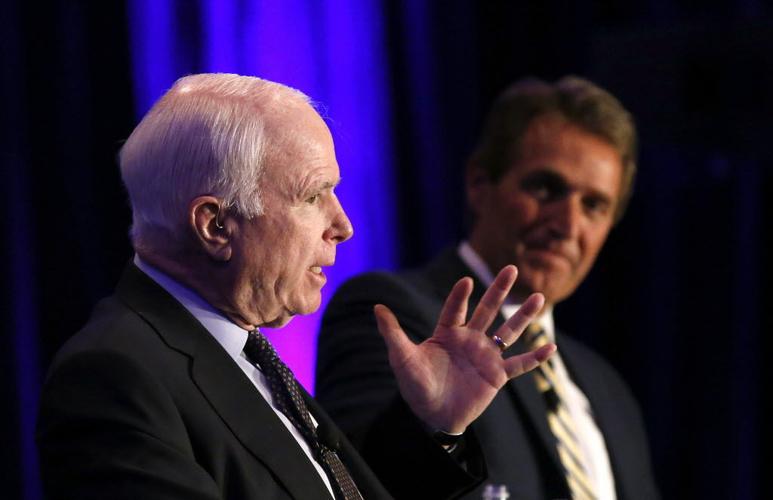 Sen. John McCain said he was “disappointed,” and Sen. Jeff Flake said he could find no “acceptable rationale” for the president’s decision.

At least McCain went a bit further and reiterated his demand for a “select committee” of Congress members to investigate Russia’s interference in the 2016 presidential campaign, and any possible collusion with Trump’s campaign.

Flake, on the other hand, has said essentially that everything is OK as it is. The FBI should keep investigating, sans Comey, and so should the Senate and House intelligence committees. That’ll work out just fine.

Our two Republican senators’ responses to Comey’s firing have been largely characteristic of their broader responses to Trump’s candidacy and presidency. Both have expressed stern disagreement with Trump’s behavior, positions or appointments at times, but neither has done much of anything about it.

McCain expressed severe doubts about Secretary of State nominee Rex Tillerson, for example, then voted to approve him.

The point is, talk is cheap. It’s easy to vocally disagree with the president’s decision to fire somebody who is leading an investigation into the president’s campaign. But what are you going to do about it?

Both say they are deeply, seriously concerned, as always, but only McCain has any mild plan for action. It’s crucial that however the investigation proceeds, Congress keeps the pressure on, because it is the one body outside of the executive branch with the power to ensure justice is done.

McSally a target in Tucson

He invaded a fellow member’s district to do it — breaking congressional norms — and it didn’t seem to have much point except to keep stoking the pent-up anger among Democrats.

But a poll conducted Monday may help explain why Democrats are pushing McSally so hard. The survey of 628 voters conducted by Public Policy Polling, on behalf of the pro-Obamacare group Save My Care, suggests McSally is vulnerable.

Of those surveyed, 56 percent said the fact that McSally voted in favor of the American Health Care Act made them less likely to vote for her. Thirty percent said they were more likely.

That’s perhaps part of what made Gallego more willing to break the unwritten rules. The rest is the unprecedented atmosphere of division that came in with Trump’s presidency.

“The norms have been broken by Donald Trump and the involvement of a foreign government in this election,” Gallego told me during a break in the event. “Once the other side starts breaking the norms, until things go back to normal, you have to also start upping your ante.”

Among those who attended the Gallego town hall at Rincon High School were several Democrats who are considering running against McSally.

The one many have whispered about is Ann Kirkpatrick. The former congresswoman representing District 1 has moved to Tucson, she told me, and is considering a run in CD2.

Kirkpatrick lost badly in her challenge of McCain last year, winning 41 percent of the vote to McCain’s 54 percent.

While the Democratic Party establishment seems excited by the idea of having a tested candidate like Kirkpatrick challenge McSally, at least four other possible Democratic challengers also attended.

One was Dr. Matt Heinz, who was standing in his scrubs by the exit door when we spoke. Attendee after attendee stopped to shake his hand and say “I voted for you.”

He couldn’t help but be a little encouraged.

Former state Rep. Bruce Wheeler was there and gave a bit of a stump speech during the question-and-answer period. So were newcomers Billy Kovacs and Joshua Polacheck.

Jeff Latas, a JetBlue pilot who has launched an exploratory committee, said he was at LAX when the event occurred.

One talked-about contender who wasn’t at the Gallego event is state Rep. Randy Friese. That could be because Friese was at the Legislature, where the session was winding down.

But it also could be because that’s not where Friese has cast his eyes. The Tucson Democrat told me he is considering running for U.S. Senate against Flake next year.

That’s the seat that U.S. Rep. Kyrsten Sinema was rumored to be pursuing, until she told KTAR that she wasn’t. But then she walked those comments back, so she may still be interested as well.

Here’s the weird thing about Justice of the Peace Paula Aboud allegedly taking the test questions and answer key from her mentor during a January training session, as my colleague Murphy Woodhouse reported Thursday: She didn’t need to pass the test.

Aboud, a Democrat and non-lawyer, had won the election over attorney Jeff Rogers. No test or training assessment could stop her from assuming her place at the bench.

That fact — that the test was not really a test — might lend itself to the explanation by Aboud that she was playing a prank on her mentor.

But even that is a really bad explanation. We should want an elected non-attorney to take her judicial training as seriously as possible. If this were a “prank,” that would suggest Aboud isn’t taking the job seriously enough.

Worse: I don’t believe the explanation. It’s the judicial version of “the dog ate my homework” and will hang over her judgeship.

Who runs the state

In the waning days of the legislative session, Arizona Capitol Times reporter Ben Giles got a rare glimpse into how power really works in Phoenix. Senators were debating HB 1290, a bill related to the formula for teacher and principal evaluations.

Giles was on the floor when he saw Sen. Debbie Lesko approach fellow Republican Sen. Steve Smith with a concern — that the Arizona Chamber of Commerce didn’t support the bill.

“I don’t think the chamber’s on board with this,” Lesko said.

“Sure they are,” Smith replied. “We run everything through them. Everything.”

Flake laid the foundation for an argument that can be made against him from the right and the left in 2018.

State ruling does not affect her judgeship but she will have to take ethics training and pay for legal proceedings.