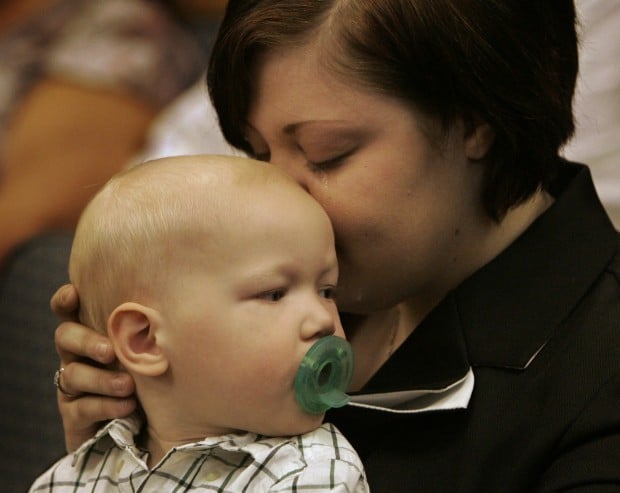 Melissa Royce, the fiance of Tim Royce, holds her and her fiance's son, Timothy Royce, age 1 1/2, as the judge reads the sentence, life without the possibility of parole, to Ruben Archunde for the murder of Tim Monday April 5, 2010. 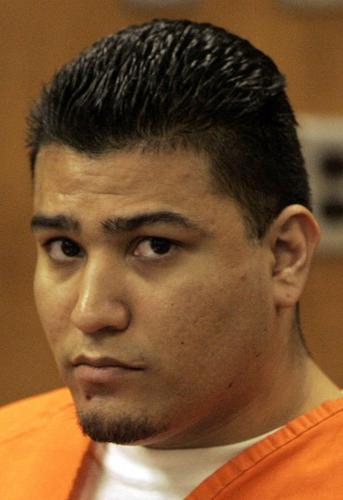 A Tucson man who shot and killed a local cabdriver to get money to bail a friend out of jail was sentenced Monday to life in prison without the possibility of release.

Ruben Archunde, 22, was also sentenced to 34 years in prison for armed robbery and aggravated robbery, but those terms are to be served concurrently with the life sentence.

Archunde pleaded guilty two months ago to killing Timothy Royce, 27, but rather than have a jury sentence him, he agreed to have Pima County Superior Court Judge Richard Fields decide if he should be sentenced to life in prison or receive the death penalty.

The judge decided prosecutors proved "beyond a reasonable doubt" that Archunde shot Royce for money and that he did so shortly after being released from jail to the county's Pretrial Services Division on a car-theft charge.

Prosecutors did not, however, prove that the slaying was "especially cruel, heinous or depraved," Fields said.

The judge sentenced Archunde to natural life, in part because Archunde "was subjected to a hell on Earth childhood" and was only 20 at the time of the March 2008 slaying.

"The family oral history and rumor is rife with physical, emotional and sexual abuse of a level incomprehensible to most," Fields said. "Additionally, drug and alcohol abuse appeared commonplace among Mr. Archunde's primary caregivers."

Royce's body was found near his car in an alley near the University of Arizona. The defendants were arrested within a week.

• Archunde's mother gave birth to five children between the ages of 14 and 21. Archunde was the second-eldest.

• Archunde's father was sent to prison when Archunde was 6, for child molestation.

• Archunde's mother moved to New Mexico when Archunde was 8, leaving her children behind with a grandmother.

• Archunde became a ward of the state at the age of 12 and made his first suicide attempt.

In sentencing Archunde, Fields said Archunde "was abused and abandoned more than anyone would wish upon their least favorite creature," and that led to his creating "street families" to fill the void.

Melissa Royce, the fiance of Tim Royce, holds her and her fiance's son, Timothy Royce, age 1 1/2, as the judge reads the sentence, life without the possibility of parole, to Ruben Archunde for the murder of Tim Monday April 5, 2010.