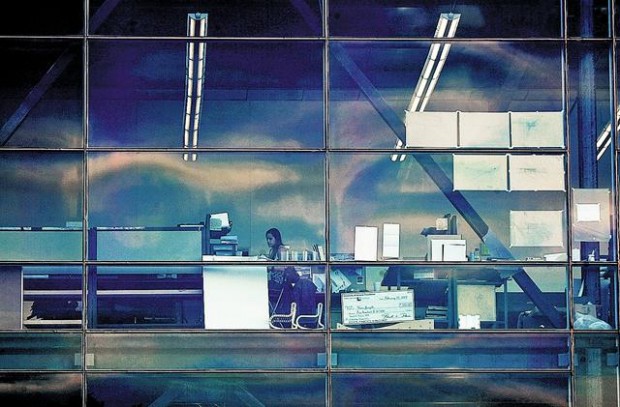 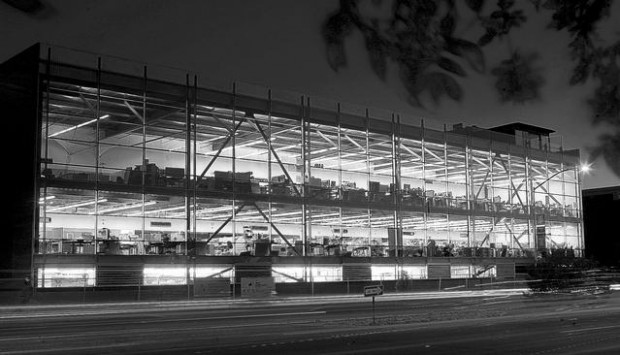 These University of Arizona buildings talk to you.

The Stevie Eller Dance Theater's architects used choreographic notation to place the columns beneath a glass-fronted practice studio that leaps from the building with a balletic defiance of gravity. The metal scrim shielding its east wall mimics the dancers' muscled movement.

The architect of the new Poetry Center has encrypted a line of Richard Shelton's poetry in binary code (like a computer punch card) into a block wall that will shield the center's bamboo and river-rock contemplation garden and the glass-walled poetry archive behind it.

The architect of the Meinel Optics Building drew his inspiration for the faceted glass wall on its north side from the Fresnel lens, the optical configuration that increases the reach of lighthouses and your car's headlights.

The addition to the UA's Architecture and Landscape Architecture College reveals its skeleton, allowing you, and its students to comprehend how the building is put together.

The buildings announce their functions. They are meant to symbolize, inspire and teach.

They have another thing in common that sets them apart — their meager use or total lack of red brick on a campus where brick has been the building material for more than a century.

"Brick is the historic material of choice and should remain the primary building material," reads the design section of the UA's campus plan.

These buildings are exceptions, not a trend, said Bob Smith, director of UA Facilities Design & Construction.

Over the past 100 years, the university has developed a handsome style that shouldn't be neglected in new buildings, he said. But in the right space, for the right reasons, with a unique design, exceptions to the red-brick rule can be made, Smith said.

Chuck Albanese, Architecture dean, remembers a conversation he had with a prominent UA donor when his college was planning its startling new addition.

He told the donor that the see-through building was a bridge between the two red brick buildings it connects on Speedway. Its south face, screened now in rusted metal, would soften with the vines his landscape architecture students plan to coax up the three stories of metal, glass and concrete.

"I told him: 'This is not just compatible but complemen- tary.' "

"It's a good story," the donor told him, "but the building still needs some brick."

The architects of the addition were ultimately able to sell the story to the various committees that pass judgment on design on campus. There is not a brick to be found amid the exposed rivets, welds, pipes and ducts. "In my mind," said architectural historian Anne M. Nequette, "this building is about what can you do with the smallest budget imaginable."

Nequette, co-author with R. Brooks Jeffery of "A Guide to Tucson Architecture," said the $9.3 million project used "off the rack" industrial materials to "get the most sustainable space for the least amount of money."

Rainwater from its roof and gray water from its sinks will be collected in an 11,500-gallon tank and used to fill the ponds and water the plants of the Landscape Architecture program's experimental gardens on the south side.

Its north window wall of double-paned low "E" glass allows students in the second- and third-floor studios to work with natural light, slices daytime lighting bills and is a much better insulator than brick.

"Brick is nice," said Nequette. "It gives the campus a unified feel. At the same time, it's not the best material for our climate."

Brick is also an additional expense. That's been a winning argument for not using brick in some recent projects.

Les Wallach, architect for the Poetry Center, set for completion this summer, said he planned to use red brick but switched to a dark-gray block to save money.

He put the money into other features of his "Desert-style" design, which attempts to erase the lines between the building's interior and exterior spaces, a hallmark of Wallach's Line + Space architecture firm.

The sliding glass wall of the Humanities Seminar Room will open to an interior courtyard and double the space available for presentations. An angled glass wall on the south simultaneously invites light and offers shade for an outdoor recitation space.

The need to provide climate-controlled rooms for the center's rare books also ramped up costs. At one point, a legislative committee balked at the square-footage cost of the center, for which the state is providing $1.9 million. The rest of the $6.8 million price tag is being raised from private contributors, headed by Helen S. Schaefer, for whom the building is named.

For the Meinel Optics addition and the Eller Dance building, brick exemptions were given for exceptional design, said Smith.

The decision was eased by their placement at the east end of campus, a quarter mile from the campus historic district, where Tucson architect Roy Place set the tone in the 1920s and 1930s with 40 red-brick variations of Classical architecture.

Nequette has high praise in her book for the "masterful brick detailing" of Place's buildings.

She said she is not so fond of some of the campus's post-midcentury buildings. "The problem with brick is we don't have the craftspeople to do a high level of craftsmanship," said Nequette.

Meinel and Eller, said Smith, are "examples of buildings far away from the historic core that have an excellence in their programs to express. Sometimes that's tough to do with a red brick box."

The Meinel Building "floats" on a cantilevered floor, said May Carr, the UA's project manager for the building. "If done in brick, it was going to look too heavy." Architect Jim Richärd of Richärd + Bauer chose copper cladding for three sides of the building, with lensed glass on the north face.

This year, it became the first Southern Arizona building to receive an honor award from the American Institute of Architects — recognition that should make it easier for the next outstanding design to argue for a pass on red brick, said Albanese.

The architectural firm of Gould Evans of Phoenix received a Citation Award from the Arizona chapter of the American Institute of Architects for the Eller Dance Theater.

The public seems to like both buildings, Albanese said.

The Architecture addition, designed by the Phoenix firm of Jones Studio, Inc., might have a tougher time selling itself, said retired architect Dick Williams, who was a member of the university committee that oversaw its design. "It hasn't been dolled up visually," Williams said, adding, "I think our building is a work of art."

Whether people love it or hate it, said Albanese, the building fulfills its purpose. "The building is a teacher. It informs the students of how it's built. Everywhere they walk, everything they touch, all the materials are as naturally expressed as possible.

"You can sketch a diagram of how it's built just by walking through it."

The addition was occupied in January, but it's still under construction. It is more crowded than it will be next semester, when renovations to the existing building are completed.

That overcrowding, and the window wall on the north, expose the customary clutter of a student architectural studio to the passing public along Speedway. "It's a little messy," said Albanese. "I'm going to send out a memo: 'The glass is not a pinboard.' "

The man most responsible for the red-brick look of the University of Arizona is architect Roy Place.

Place (1887-1950) is probably best known for the Old Pima County Courthouse, whose colorful ceramic-tiled dome is as much an icon of the Old Pueblo as the towers of Mission San Xavier.

He made a larger imprint on campus, where he designed or oversaw construction of more than 40 buildings, including the north and south buildings of the Arizona State Museum at the campus's Main Gate and the auditorium now known as Centennial Hall.