The Pancho Villa statue in downtown Tucson withstood another challenge last week after a dozen Tucsonans spoke in its defense.

The most recent challenge to the statue was framed as a 37-year-old procedural error. Judicial Watch, a conservative watchdog group based in Washington, D.C., said city of Tucson records indicated no public hearing was held to hear complaints about the statue before it was unveiled in 1981 and therefore the statue should be removed.

The request did not fare well at Wednesday’s meeting of the Public Art and Community Design Committee, which manages the city of Tucson’s public art collection. The 18 members of the committee unanimously rejected the request, saying it did not meet any of the 10 criteria used to consider removing public art, such as damage or a request from the artist.

The vote came after Tucson residents took turns saying the statue was beautiful and pointing to its role in celebrating local Mexican-American culture.

“We don’t want to forget that history, that history that is grounded in Mexican-ness,” said Lydia Otero, a professor of Mexican-American studies at the University of Arizona.

“Each person that walks up to the statue has to ask questions about why this statue is here, right downtown,” Otero said. “And they have to come up with their own answers. You know why? Because we are Tucson and it is complicated.”

Alejandro Escamilla, a teacher in the Tucson Unified School District, said seeing Villa’s statue “always made me feel proud that there was a statue of a Mexican right there in downtown, right across the street from a community that was destroyed,” referencing the barrio that was leveled for the construction of the Tucson Convention Center and other buildings in the 1960s.

Spencer said he was approached by three Tucsonans who wanted the statue removed, but needed help voicing their complaint.

“It’s never too late to do the right thing,” Spencer said. Rather than “allowing the mob to rule,” he said holding a public hearing is “the healthy course of action here.”

After the meeting, Spencer said he would consult his legal team to see if the committee had adhered to city policies.

In addition to the procedural question, Spencer said the statue “needs to go” because “Pancho Villa did great harm to people.”

Villa was a leader in the Mexican Revolution who was lionized in Mexico as a champion of oppressed peasants.

North of the U.S.-Mexico border, he was best known as a bandit who ordered the 1916 attack on Columbus, New Mexico, located a few miles north of the border, in which at least 17 residents were killed.

Villa’s clearest connection to Southern Arizona was a 1915 battle in Agua Prieta, Sonora, just across the border from Douglas.

In a historical essay handed out to the committee last Wednesday, Otero said no definitive history exists of Villa’s connection to Tucson, but some stores in Tucson sold arms to various factions in the revolution. In 1913, Villa was said to have spent four days in Tucson to buy weapons.

For nearly four decades, drivers who leave Interstate 10 and head into downtown on West Congress Street have been greeted by Villa sitting astride his horse.

The 14-foot-tall bronze statue stands in the middle of the trees in Veinte de Agosto Park, which splits Congress and Broadway. The plaque at the statue’s base says it was a gift made “in friendship” from Mexican President Jose Lopez Portillo.

The Arizona Daily Star’s archives show the statue was a gift to Arizona from the Mexican government and a Mexican press group.

It originally was intended for Guadalupe, in Maricopa County, but ended up in Tucson. The statue was the work of Spanish-born sculptor Julian Martinez, who also made the Father Eusebio Francisco Kino statue on South Kino Parkway.

Five council members attended a May 11, 1981, study session to discuss a recommendation from the arts council to put the statue where it stands today, as well as any potential safety issues with children crossing the street to get to the statue.

The five council members present voted unanimously to install the statue, according to city records turned over to Judicial Watch through a records request and obtained by the Star from the arts committee.

As Judicial Watch noted in its request to remove the statue, the city received more than a dozen public complaints about the statue. One was sent prior to the council’s study session in May 1981 and 12 were sent afterward.

Some of the complaints came from veterans groups saying the city should not celebrate someone who fought against the United States. Private citizens echoed that sentiment or said the statue was in “bad taste” or a “disgrace.” Others said “Tucson is Mexified enough” and, “This place gets so Mexicanified.”

The last complaint to the Mayor’s Office was dated June 29, 1981. Within about five months, the mayor’s office had stopped getting mail about the statue, according to Star archives.

In June 1981, Tucson businessman Byron Ivancovich sued the city in Pima County Superior Court to have the statue removed.

“Statues are put up to honor worthy recipients,” Ivancovich told a Los Angeles Times reporter in an October 1982 news story that spread across the country.

“In this case, we have a statue to a murderer and a bandit.”

Ivancovich argued the statue brought down the value of his downtown real estate holdings.

A man who joined his suit, Bernardo Acedo, said the statue was an affront to families who suffered at the hands of Villa at a massacre in the Sonoran town of San Pedro de la Cueva.

A Superior Court judge ordered a summary judgment in favor of the city in April 1983, the Star reported.

In June 1983, Jack B. Frost, a Show Low resident and veteran, protested the statue, according to Star archives. Frost said his father was wounded in the Columbus raid and eventually died from lead poisoning from shrapnel.

“It destroyed our family,” he said. “I have suffered the pain of it all my life.”

Another man, Richard Sense, held an annual one-man protest of the statue until at least 1990, the Star reported in March 1990.

The move by Judicial Watch came as statues of Confederate officers are being removed across the country, often sparking controversies over which historical figures should remain.

In contrast with Confederate statues, the Villa statue was “not put there to scare people” nor was it erected under a racist legal system, Mari Herreras, who works for YWCA Southern Arizona, told the committee last Wednesday.

Spencer said after the meeting the only connection with the Confederate statue issue is how decisions are made about which statues should remain.

Spencer said he had not made similar requests about removing any other statues in Tucson or around the country.

“We are not in the statue-removing business,” Spencer said.

Frank Hartline: Why we shouldn't remove Confederate or other controversial memorials

Memorials are important: They force us to remember our sometimes ugly past.

Trade in Pancho Villa for a true hero

Finding the mettle to face the truth about monuments, massacres and memories

Charles Tampio: Removal of Confederate monuments will help us heal

Every memorial ​is designed to make a ​political statement. ​ ​ 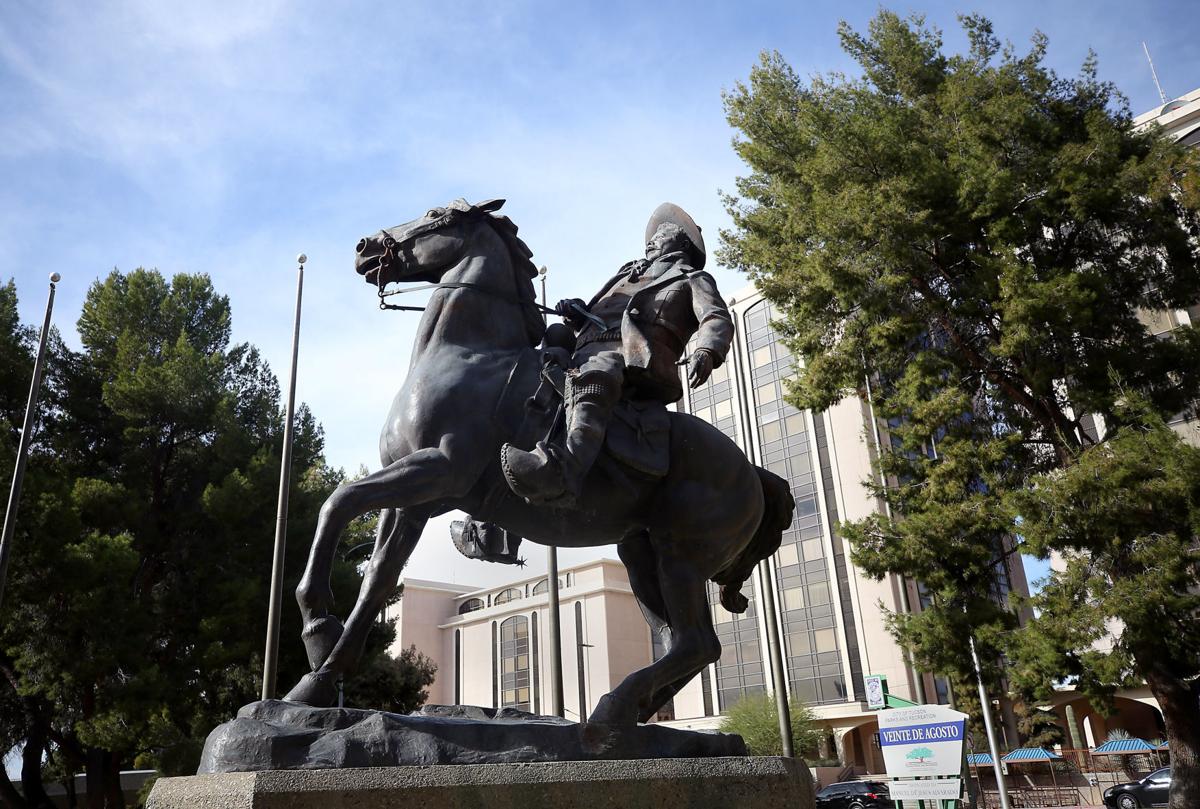 The Pancho Villa statue in Veinte de Agosto Park downtown has been there since 1981. There have been several requests over the years to have it removed. 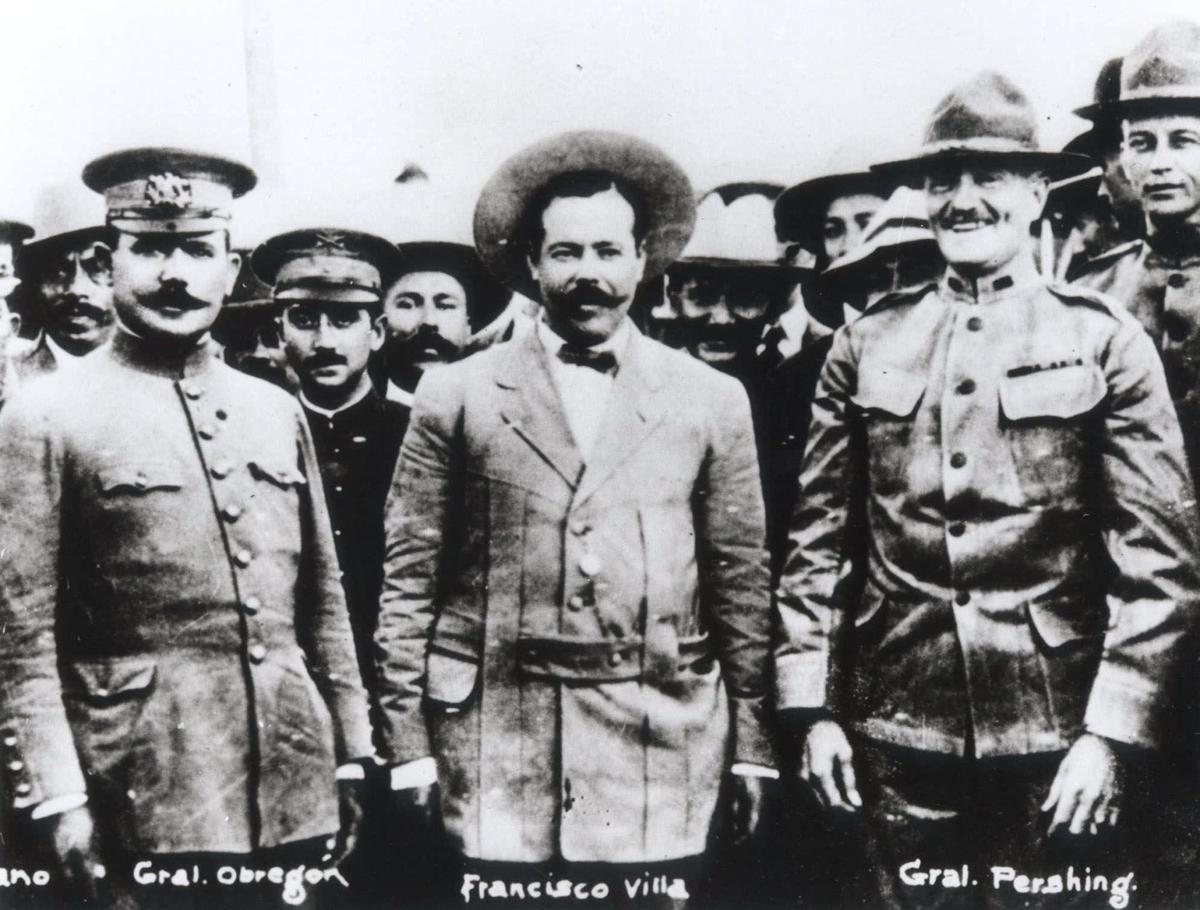 This picture, taken at the border at Nogales, Ariz., in 1916, shows left to right, Gen. Alvaro Obregon, Gen. Pancho Villa and Gen. John J. Pershing in a friendly meeting. A few months afterward the three generals became “enemies on the field” as Pershing dashed into Mexico in pursuit of Villa. According to documents, Villa stole 122 bars of silver from a Wells Fargo train in 1913, then secretly struck a deal to sell most of the loot back to the bank.