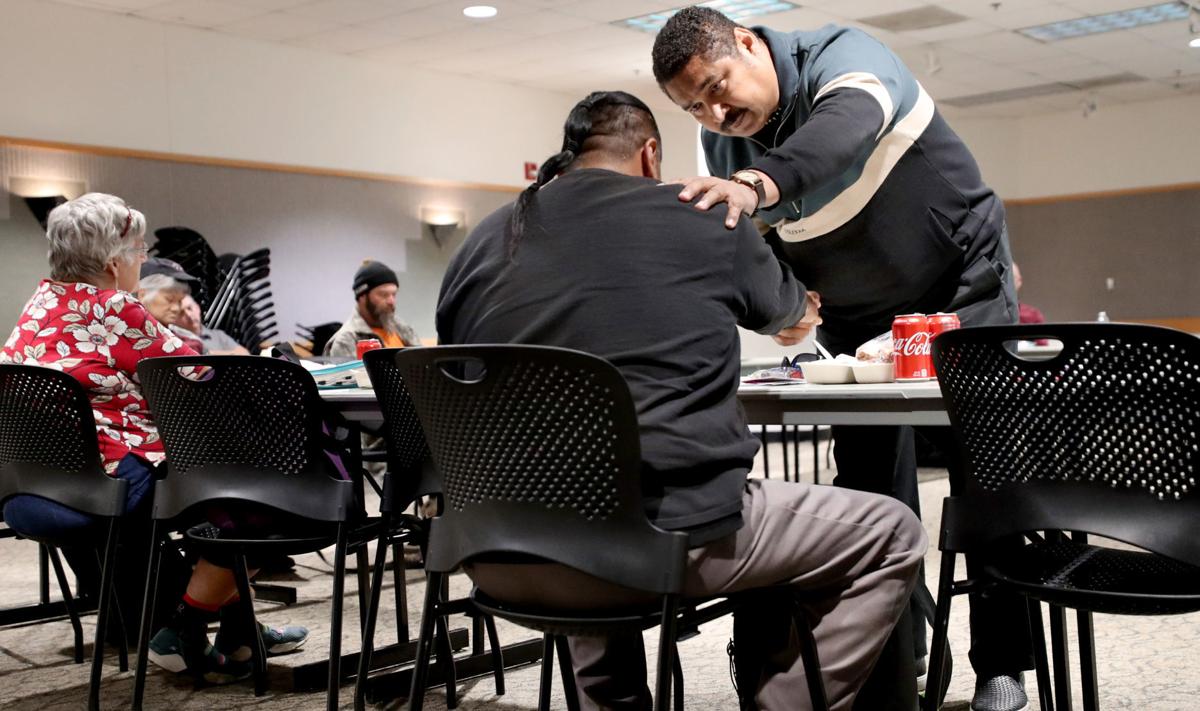 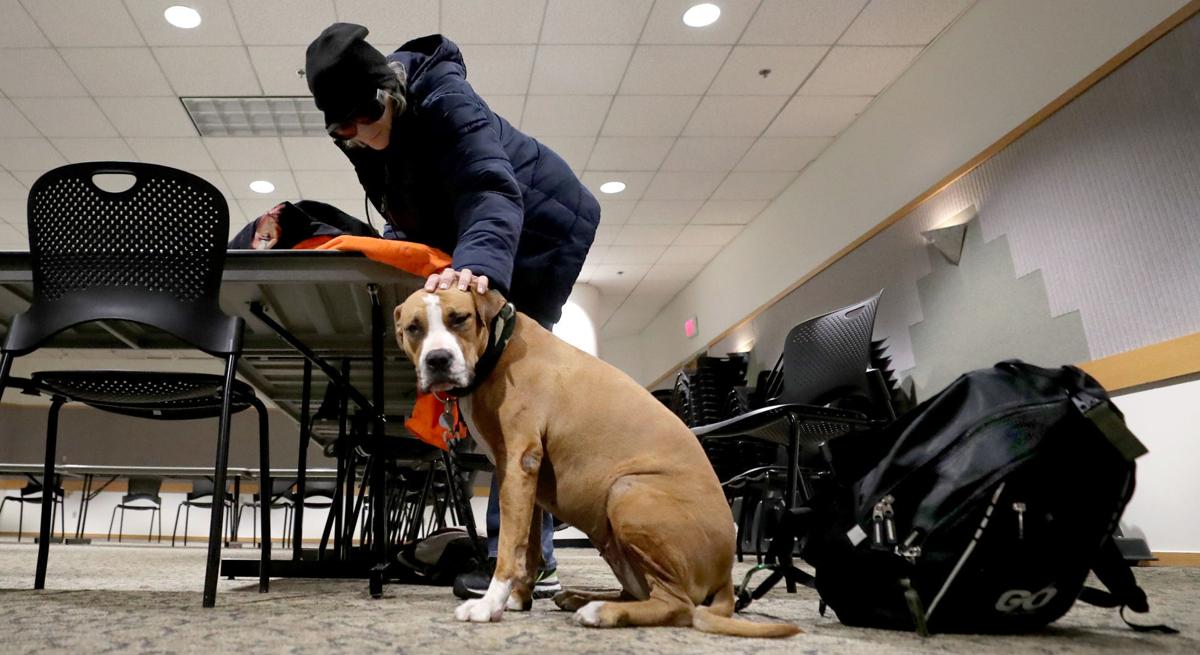 On the Saturday before Christmas, a few dozen men and women gathered in a downstairs conference room at the Joel D. Valdez Main Library for a free meal and a meeting that had nothing to do with books.

Several people arrived with bulky backpacks and grocery bags stuffed with their possessions. Two women brought dogs with them.

Many who came grabbed their food and quickly left. The dozen or so who stayed sat facing each other at tables arrayed in a square and shared their hopes for the new year. Then the lights were dimmed so a counselor could teach them some stress-relieving meditation techniques.

“In a way, this is a port in a storm for people who are looking for connections,” said Jo, a homeless woman who declined to give her last name. “Some people come for the food. Some people are hungry for more than food.”

Tucson’s downtown library launched the monthly On the Streets meetings in November 2018 to engage with people who are experiencing homelessness, find out what they need and help connect them to possibly life-saving services.

The program is an example of the increasing role public libraries nationwide play as social service providers in their communities.

Expanding the reach of “the last public spaces”

The American Library Association even offers a pamphlet of tips on its website for libraries looking to help their homeless customers. The Pima County Public Library was one of seven “model programs” singled out by the association nationwide.

Starting in 2012, the main library and several area branches partnered with the Pima County Health Department to provide an on-site nurse for people in need of medical or mental health services.

“It’s not just about the books. The library always tries to serve everyone, and we always try to identify underserved populations,” said librarian Meggin Kitterman, who helped start the On the Streets program. “We try to get to know all of our customers.”

According to a 2018 report by the Arizona Department of Economic Security, an estimated 4,673 people in Pima County were homeless last year.

Some homeless people see the library as a place to get in out of the elements and use the bathroom, but they also stop there for the same reasons everybody else does: To use a computer, lose themselves in a book or just sit somewhere quiet and think.

“Libraries are the last public spaces that are truly public. You don’t have to have money to come here,” said Kate DeMeester, library services manager for Pima County and branch manager at Joel D. Valdez.

DeMeester said the idea behind On the Streets is so simple, so obvious, that she wonders why they didn’t do it a long time ago: The best way to build relationships with the people who frequent the library is by talking to them.

“Every new idea is radical until you try it, and then it’s, ‘Oh, this is the most natural thing in the world,’” she said.

Program offers a place to eat, talk and vent

Librarian Matt Landon, who runs On the Streets with Kitterman, said the Dec. 21 meeting drew a smaller crowd than usual, possibly because the cold weather drove more people into the shelters.

The monthly sessions typically draw about 50 people, roughly half of whom will stay to eat their meals and take part in the conversation.

The agendas are largely set by the participants.

Kitterman said it’s a common misconception that homeless people are chronically unemployed by choice rather than circumstance. “Many people do want a job, and there are a lot of barriers to getting one,” she said, from a lack of transportation and proper identification to shelter curfews that sometimes force people to chose between working a late shift or getting to sleep indoors.

On the Streets also serves as a place for people to vent their frustrations. Occasionally, arguments break out, but the meetings are generally civil, Kitterman said.

Among the suggestions made at recent meetings: a library bulletin board with up-to-date weather forecasts, greater access to bus passes and first-aid supplies, more places to shower or use the restroom, and lockers or storage bins, so people don’t have to haul all of their stuff to job interviews or risk losing their IDs and other important documents to thieves and bad weather.

“We don’t have a place to keep anything, even something we treasure,” said a woman at the November meeting who gave her name as Erica.

She did not return for December’s On the Streets program.

“At every single meeting, about half the group is people we’ve never seen before and half are familiar faces,” Kitterman said.

Early on, participants were given bags of food purchased from a grocery store.

Now the meals are prepared and provided by the Community Food Bank of Southern Arizona’s Caridad Community Kitchen and stored in a commercial refrigerator the library bought specifically for On the Streets.

The meetings are held on Saturdays because that’s a day when few charitable organizations are handing out food downtown. No one is required to stay and participate in order to get a meal.

“These are obviously drops in a very large bucket of need, but we want to do what we can,” DeMeester said.

The library gets something out of it, too. So far, DeMeester said, On the Streets has successfully “reduced the friction that we’ve had at the branch at times,” when people violate policies against sleeping, bathing or bringing too many personal items into the building.

“If we know someone from having come for the program, it’s easier to have conversations about the rules. We’re not just enforcers,” she said.

In return, library staff is taking a more flexible, less confrontational approach to enforcement, though the overall conduct policy has not changed, DeMeester said. “We do want the library to be a welcoming place for everyone.”

Mindfulness counselor tells group, “This too shall pass”

Jo said she discovered On the Streets early last year, and she has been a regular ever since. The woman in her 70s showed up to the Dec. 21 meeting in a Christmas shirt and a red sparkly hair band.

“I think it’s wonderful. It feeds my intelligence,” she said of the program.

After the meal, she and the other attendees received pink tickets they could redeem with the library nurse for a holiday gift such as sleeping bags, pillows, radios, flashlights, blankets, first-aid supplies and hygiene products.

Then came the meditation lessons from Tucson native and mindfulness counselor Tony Mosley.

“If someone tells you your predicament is who you are, that’s not fair,” Mosley told the group. “This too shall pass.”

Jo said she has been without a permanent home for the past 17 months. Aside from the occasional housesitting opportunity, she sleeps in her van at whatever safe, quiet place she can find to park.

She couldn’t say for sure whether she will keep showing up to the library’s monthly meetings next year. That will all depend on her living situation, Jo said.

If you enjoy reading the book before it comes to life on the big screen, check out these titles being adapted to film or television in 2020.

Diplomacy, state parks and the tracing a family's journey to America on the minds of Southern Arizona authors

“From Sadat to Saddam: The Decline of American Diplomacy in the Middle East” by David J. Dunford.

Unleash your inner dragon and celebrate “Appreciate a Dragon Day” this week with some dragon-centric stories.

At Woods Memorial Library, forming community bonds is at the forefront

This north side library is extremely busy with 300 to 500 people coming through its doors on any given day.

These book recommendations will inspire and delight.