Teachers across Tucson and the state say they don’t want to return to classrooms while the coronavirus rages.

Tucson school districts haven’t seen many teachers leave, but some educators say they would retire early or resign if forced into a classroom while COVID-19 numbers remain so high. Others say they can’t afford to quit but are terrified to go back.

Every year kindergarten teacher Karen Motl jokes with her colleagues about being inoculated by students because of how kids pass around the flu or common cold when the school year starts. The 60-year-old Borman K-8 teacher, who has underlying health conditions, said this is different.

“There’s nothing I would want more than to go back to the classroom to teach with kids, but I can’t because it’s not safe,” she said. “I don’t want to gamble my life.”

The Tucson Unified School District’s reopening plan has room for educators to work remotely, teaching kids online while monitors supervise smaller groups of students in classrooms. A recent survey of TUSD parents found that 50% would choose not to send their children into classrooms on Aug. 17, the tentative reopening date for in-person schooling statewide. How many teachers are required to show up in person ultimately depends on how many kids show up.

There are four kindergarten teachers on Motl’s team. Two are in a higher age bracket and another is close, she said. One has diabetes, another has asthma and one has children with medical issues.

“We’ve all got our risk,” she said. “So how does that decision get made. Do you draw the short straw?”

Motl said she hopes she’ll be able to teach remotely, but if asked to go back into the classroom with the pandemic surging, she’s going to retire — five years early.

TUSD Governing Board Member Kristel Foster said the district has a lot of teachers who could retire but they don’t because they love their job.

A number of teachers have told her they don’t know if they would return in person under the current conditions around COVID.

Before COVID, Vail School District teacher Sharon Goldwasser had planned on retiring in a year. But with coronavirus cases surging in the state, she decided to retire now.

“I just kept agonizing over it for probably a month,” she said. “I just did a lot of soul searching.”

Both Goldwasser and her husband are in their 60s, which puts them at higher risk for a poor outcome from the virus. The Desert Sky Middle School science teacher reevaluated her finances. She was able to get on her husband’s health insurance and found if they cut back for a year, they’d manage.

All her colleagues are wrestling with the fear of returning to an unsafe environment, she said. A couple of teacher friends told her they would retire but can’t swing it financially.

“Nobody that I’ve spoken to is of the opinion that it’s a dumb thing to retire or dumb thing to get out of the school if you can,” she said. “A lot of people are just trapped by their circumstances.”

“There’s been an utter lack of leadership nationally and statewide that could have really reduced the impact of this so we wouldn’t have these terrible choices,” Goldwasser said.

Indecision at the state level has made it hard for teachers and local leaders to plan the upcoming school year and has only contributed to rising fear, said Foster. Educators have had to plan for three or four different scenarios.

“When you’re planning for everything, you’re not planning for anything,” Foster said. “We really need to have respect for the planning that goes into teaching, and when they don’t know what to expect, that’s just fueling their fear.”

Ahead of last Thursday’s press conference by Gov. Doug Ducey, many local school leaders were anxiously awaiting further guidance on a reopening date, since the Aug. 17 date was tentative and felt arbitrary to many education officials. But Ducey kicked any decision to next week, saying he would release more guidance with additional flexibility.

Across the state, educators, parents and community members have sent letters to the governor and state lawmakers asking that schools not reopen yet. And for several weeks, teachers have been holding motor march events in Phoenix and Tucson, demanding that schools stay closed until it is safe to open.

Eight in 10 educators say schools should not reopen until it’s safe, according to an Arizona Education Association survey of 7,651 educators.

Teacher Debbie White-Black is very nervous about going back into the classroom. She’s 57, and although she’s been a teacher for nearly 30 years, retiring this early would mean a huge financial hit and going without health insurance.

White-Black, a fifth-grade teacher at Bloom Elementary, has diabetes, asthma and an auto-immune disorder. She also fears for her husband, who is 67 and has a history of bronchitis. And she takes care of her 81-year-old father, who has a multitude of health concerns.

Like so many educators and school leaders across the state, she wants the in-person return date postponed until at least after Labor Day. But if she’s required to go back into the classroom before then, she’ll have no choice.

White-Black is proud of the way teachers stepped up to deal with this crisis, as they’ve always done in times of crisis, she said.

In recent years, teachers have had to think about risking their lives to protect their students in the wake of mass shootings.

“This could be easier to take care of than a shooter in that we could stay home,” White-Black said. “Although I’m sad that we have to be ready to take a bullet for the kids — I mean taking a bullet — I’m ready. I’ve always told the kids, ‘I’m here. I will take care of you.’ But now, who’s taking care of us?”

TUSD to spend $13M to reopen schools; says monitors, not teachers, might be in classrooms

Students in the Tucson Unified School District could be supervised by monitors who will be tasked with ensuring pandemic safety guidelines while educators teach virtually from home.

Saying the presence of uniformed officers may make students of color feel unsafe, Tucson Unified board president Kristel Foster asked that the district rethink the use of school resource officers.

Official says Arizona should consider a sustained two-week drop in the coronavirus case load, which has yet to occur, in deciding when to open schools.

Tucson Unified School District spent $1.2 million on law enforcement in 2018 and 2019,to have school resource officers at schools and off-duty law enforcement at events.

Sessions for families are scheduled in both English and Spanish. A separate session is planned for Tucson Unified employees.

Arizona education and health officials are pressing Gov. Doug Ducey to only reopen schools when coronavirus cases show a consistent downward trend and when testing can yield timely results.

Arizona will leave decision on reopening to school leaders

Arizona schools will get more money to provide education during the coronavirus pandemic.

After Arizona Gov. Doug Ducey placed reopening decisions in the hands of school leaders, some education officials feel they've been left to fend for themselves during the coronavirus crisis.

Arizona has the highest ratio of students to teachers in the country and the state also has a lower share of certified K-12 teachers in public schools than almost anywhere else, a WalletHub report found.

Face-to-face learning as the coronavirus continues to be widespread in the community makes traditional classroom learning too risky, a new report from Pima County's Health Department says.

Citing record hospitalizations, a lack of rapid test results and a high number of coronavirus cases, the Pima County Health Department says face-to-face in-person learning is not safe in Tucson at this time.

Tucson's largest school district will ask the state to allow it to keep campuses closed beyond Aug. 17.

With some Tucson school districts requiring teachers to return to campuses, educators feel its an unnecessary risk. 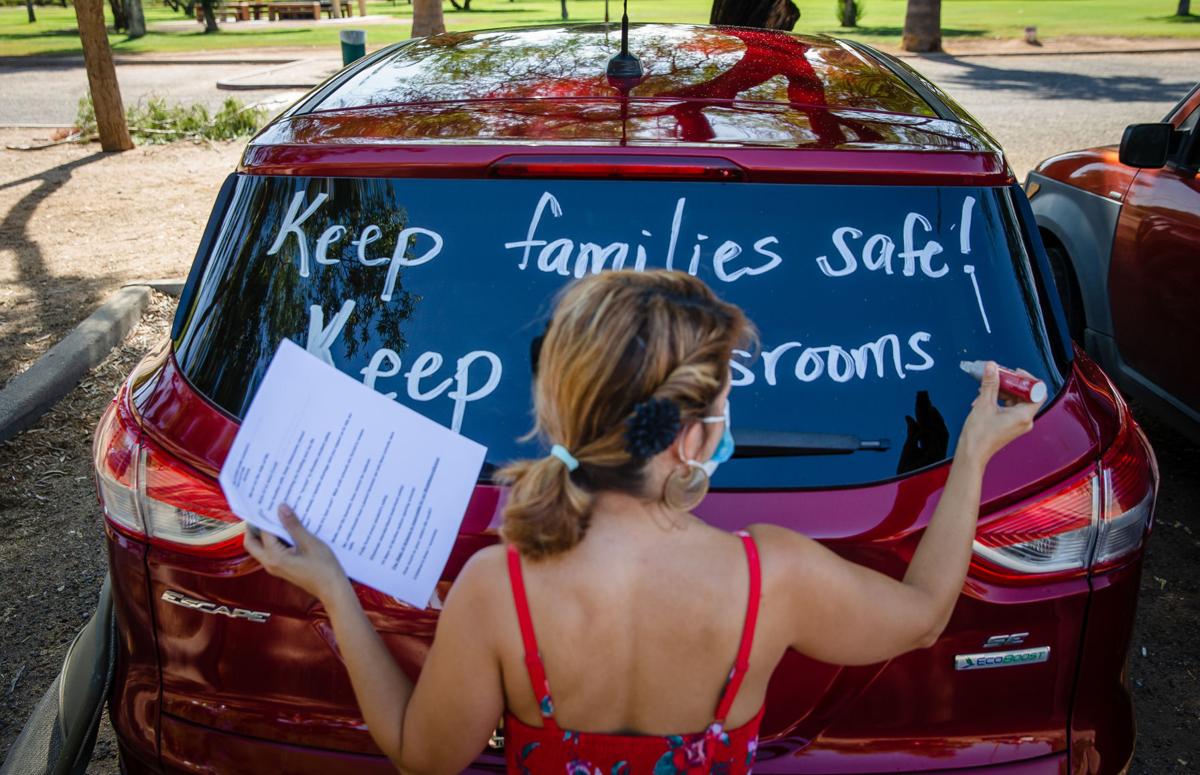 Andrea Ayala, a history and English teacher at Pueblo High School, writes messages on her car urging state leaders not to reopen schools too quickly as part of a motor march. 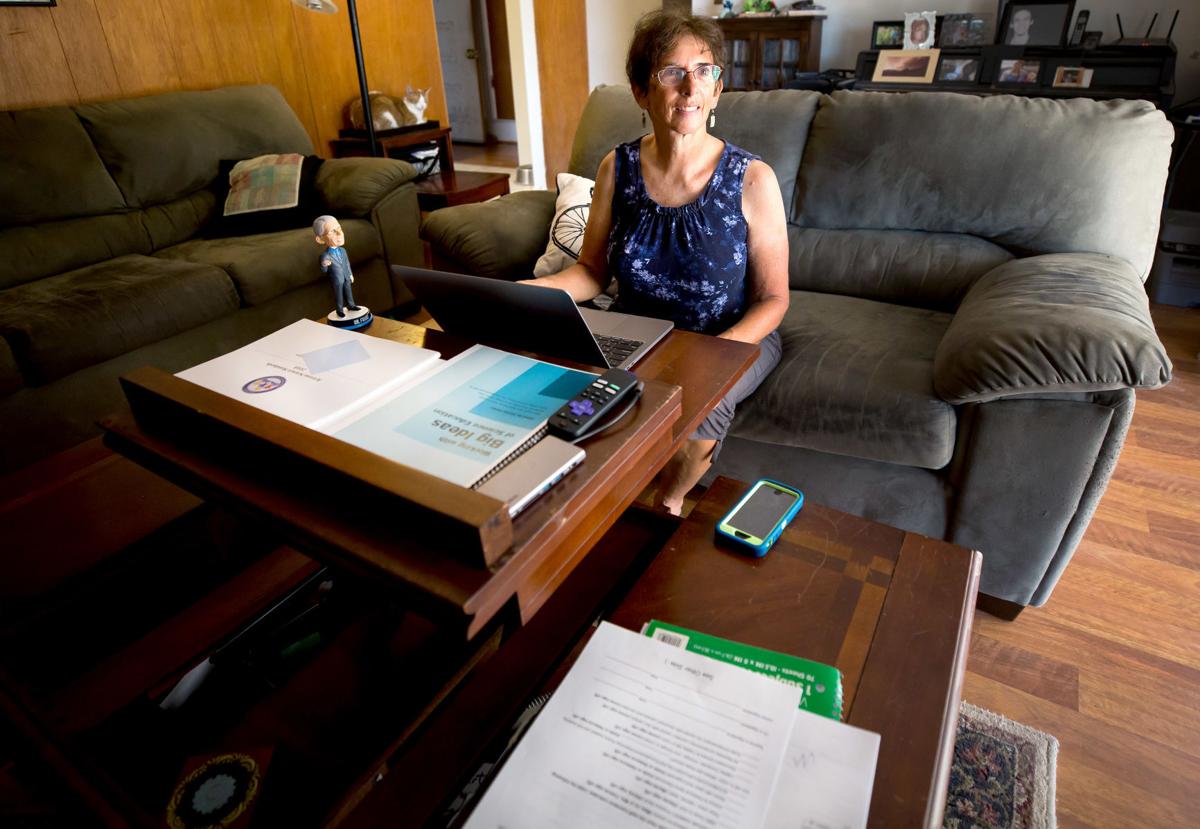 Vail School District teacher Sharon Goldwasser decided to retire rather than risk being sent back for in-person classes. “I just kept agonizing over it for probably a month,” she said. 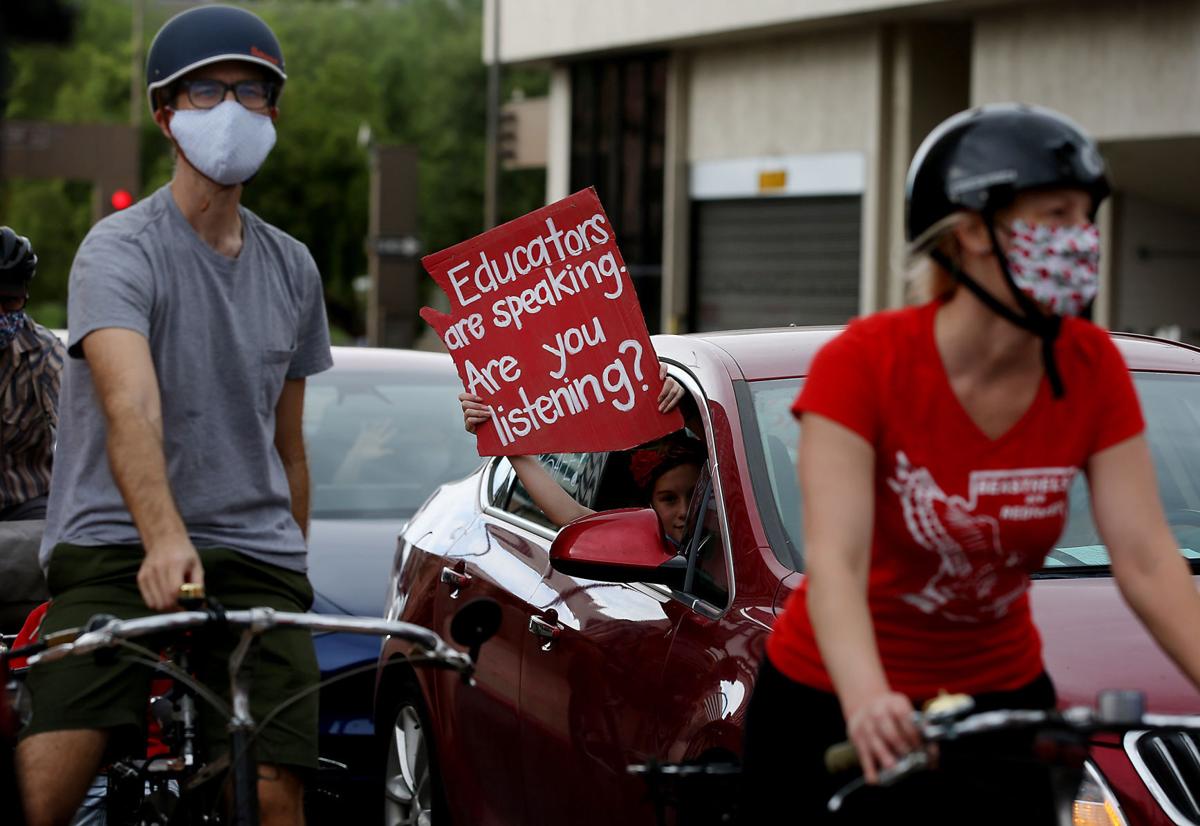 About 100 cars with Tucson Unified School District educators, parents and supporters participated in what was dubbed the Motor March for Safe Schools last Wednesday. 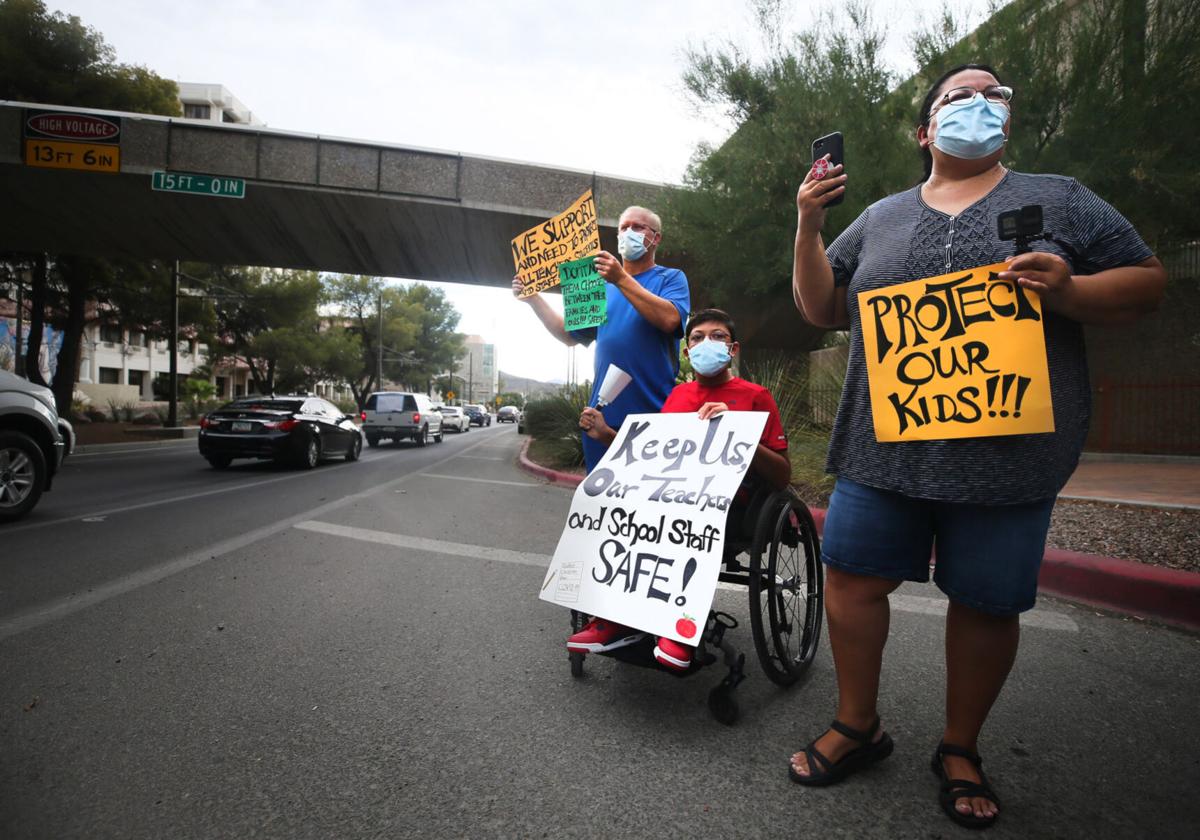 Ryan Kuchta, 13, center, is joined by parents Mark and Sonya on a downtown street in a show of support for educators during the Motor March for Safe Schools.