At age 95, Katie Dusenberry keeps on working to further the expansion of services for older adults in Tucson.

Her latest gift is a $300,000 donation to a capital campaign to raise $2.5 million to purchase, renovate and operate the new Pima Council on Aging’s Katie Dusenberry Healthy Aging Center. More than $1.8 million has been raised.

The 16,000-square-foot center at 600 S. Country Club Road — across from Reid Park — is a centrally located hub for services to support quality of life for older adults, and to advocate for them and their families. Agency staff moved into the new center recently but the private grand opening festivities are set for mid-November.

“This center means a lot to me,” said Dusenberry. “It means that we will have the priorities set to have aging as a living part of our community.”

Aging issues have always been of great importance and must remain in the public eye, said Dusenberry in a recent interview about her longstanding community service. “Our elders are extremely important in the life of our community because they have had experiences the younger generation can learn from.”

Dusenberry was nominated in 1981 by President Ronald Reagan to the Federal Council on the Aging, which advised the president, Congress and other governmental leaders about issues facing seniors as part of the Older Americans Act.

She remembers the difficulty “to keep the Older Americans Act alive and have Congress enact it every year. It was a constant fight. We were going to make a difference, and we did,” she said of the council’s tenacity to secure funding for aging services. Dusenberry recalled having the ear of President Reagan, sitting by him during lunch at the White House. She served on the Federal Council on the Aging for nearly 10 years.

W. Mark Clark, president and chief executive officer of Pima Council on Aging, described Dusenberry “as a pioneer leading the way for the improvement and expansion of aging services” throughout her career locally and at the state level while she served on the Pima County Board of Supervisors. Dusenberry, who says she is a moderate Republican, was the first woman on the board, elected in 1976.

She also served on the council-on-aging board for more than 10 years. The council “is a stronger organization because of her involvement. In fact, the aging network nationally is stronger because of her championing the Older Americans Act,” said Clark.

“We are so grateful for that legacy of service,” said Clark, expressing that it is a privilege to recognize Dusenberry’s lifetime of work by naming the center after her.

As Americans live longer, and 10,000 baby boomers will be turning 65 each day until 2030, the aging center will help handle the growth for senior services in Pima County.

Demographics in the county show 25% of all residents are age 60 and older. In 2017, Arizona’s population was estimated at 7 million, and by 2020, one in four Arizona residents will be 60 or older, according to state projections. Council officials say Tucson has the third-oldest population of all major metro areas in the nation.

The council’s home health-care company, PimaCare at Home, will be based at the aging center, and its caregiver training program will be expanded.

In addition to the aging center, the council’s administrative office — the Marian Lupu Building at 8467 E. Broadway — will remain open and programs will continue to be offered there along with exercise classes at several neighborhood centers in the Tucson area.

For Dusenberry, a native of Phoenix who moved to Tucson when she was 10, community service runs in her blood. She learned its significance from her parents, Oakley and Florence Norton. Her father was in the dairy business, and her mother worked in banking.

Dusenberry graduated from Tucson High School in 1942 and attended the University of Arizona for two years before finishing at Iowa State University, receiving a degree in nutrition and hospital dietetics. She returned to Tucson and worked with patients, including the elderly, at Tucson Medical Center before marrying Bruce E. Dusenberry in 1948.

Son Bruce L. Dusenberry recalls his mother’s energy and strength in rearing him and his three sisters while helping his father operate a moving business that was in his family since the 1920s. He was the brawn, and she ran the office doing all the administrative work. The couple was married for 69 years. Bruce E. Dusenberry died in 2017.

Horizon Moving Systems was built into the largest mover in Arizona and a major company in the United Van Lines and Mayflower Transit national systems. Their son took over the business in 1993 until 2013 when operations in Tucson, Phoenix and Flagstaff were sold.

While working for the moving business and running a household, Katie Dusenberry then served on the Tucson Unified School District board for 11 years. She ran for the board in 1963, and was elected board president in 1967 and in 1971.

She decided not to run in 1974, and later served on a desegregation committee when the federal government said the district had to racially balance it schools. She suggested magnet schools, which eventually was adopted by the board.

The Dusenberry-River Library, 5605 E. River Road, is named after her. It opened in 1991, and was the 17th library in the county public library system, says a county website. Her work included consolidation of the city and county library systems.

A key aspect of Katie Dusenberry’s life has always been community involvement — a family value passed down from her parents and grandparents, said her daughter-in-law Lynne Wood Dusenberry, recalling the importance of holidays, such as Thanksgiving gatherings at a family home near Big Bear Lake in California.

In a video tribute, her son said: “The Dusenberry family, in particular my mom, has been associated with PCOA for many, many years. This (monetary) gift that she’s making now is just a furtherance of all of that.”

He said the family is proud that Katie “continues to want to do things for the community in a very significant way.”

Donations can be made to the Pima Council on Aging's $2.5 million capital campaign to open the Katie Dusenberry Healthy Aging Center. More than $1.8 million has been raised.

Send contributions to PCOA at 8467 E. Broadway, Tucson, Az. 85710 or give online at healthyagingcenter.pcoa.org.

Donations will be matched dollar for dollar by the Connie Hillman Family Foundation and the estate of Donald and Joan Diamond, said Lana Baldwin, PCOA vice president of philanthropy and communications.

For further information, Baldwin can be reached at 305-3411.

Scoutmaster for east-side troop praised for 37 years of leadership

Former scouts traveled from across the country to attend his retirement celebration.

Two veterans enjoy each others company, including time spent outdoors.

The men are in their late 70s and became known as the Chasers in 1957.

The goal of both organizations is to raise the competency standards of health-care workers and increase the numbers of caregivers in Pima County, officials said. 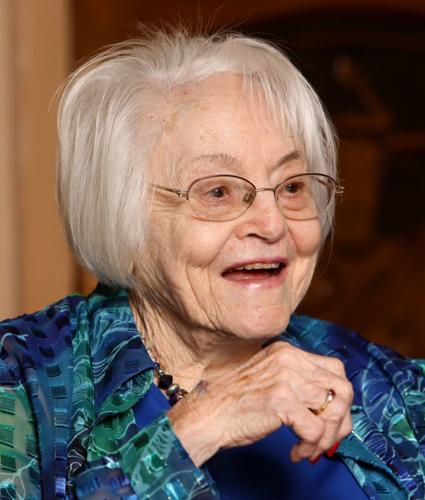 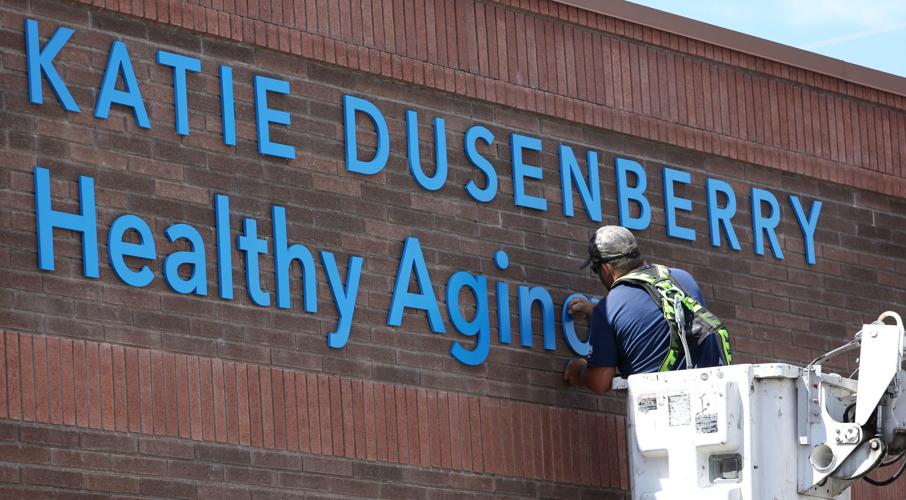 A worker installs the sign on the new Pima Council on Aging building named for Katie Dusenberry at 600 S. Country Club Road. 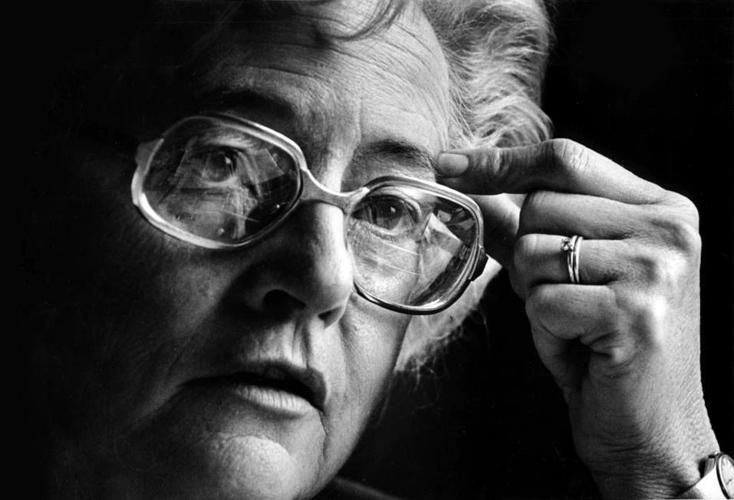 Katie Dusenberry in the 1980s. 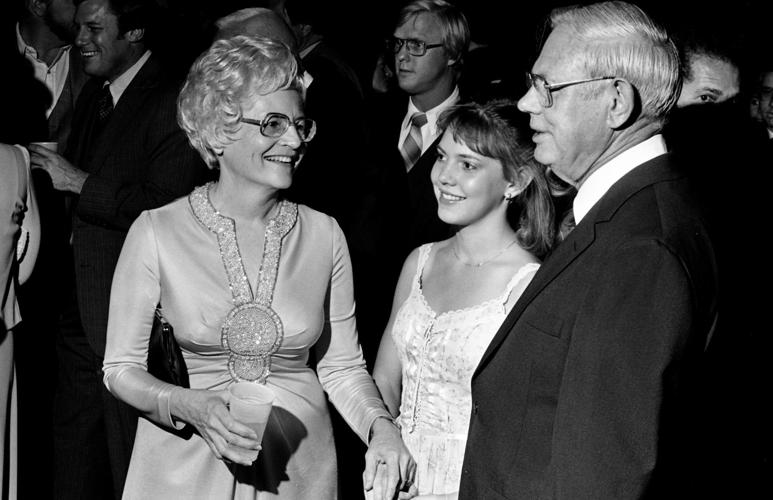 Katie and Bruce Dusenberry with daughter Janel at a fundraiser for the National Jewish Hospital and Research Center at the Holiday Inn Holidome on April 15, 1982. 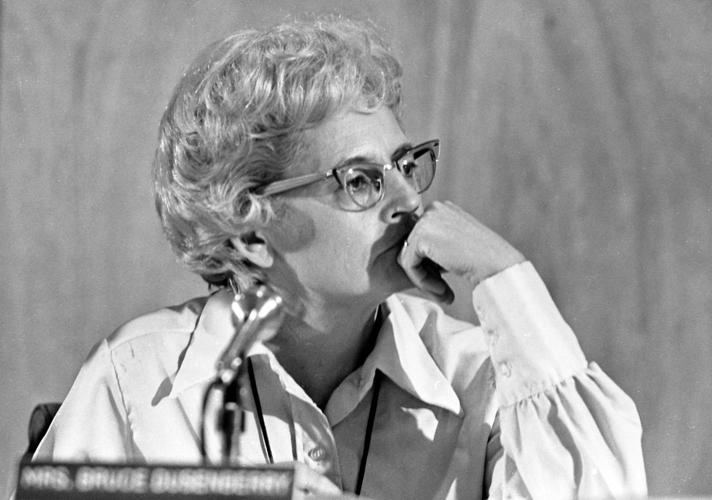 Tucson Unified School Board member Katie Dusenberry during a board hearing on May 22, 1974, concerning closure of Davis and University Heights elementary schools. 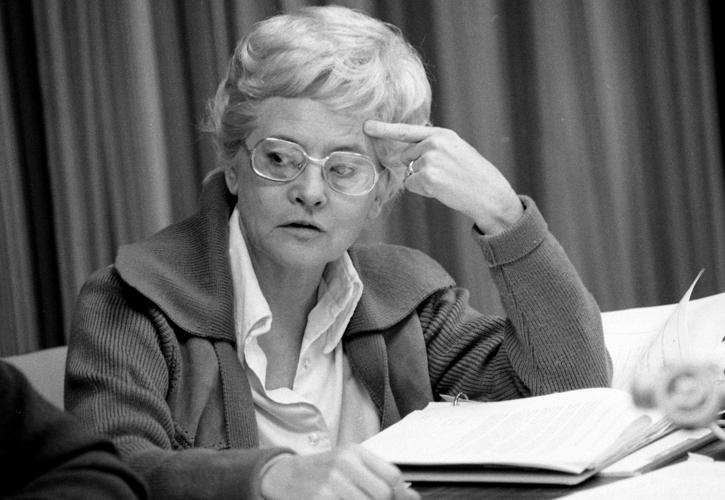 Pima County Supervisor Katie Dusenberry during a board meeting in Tucson on Nov. 3, 1978.