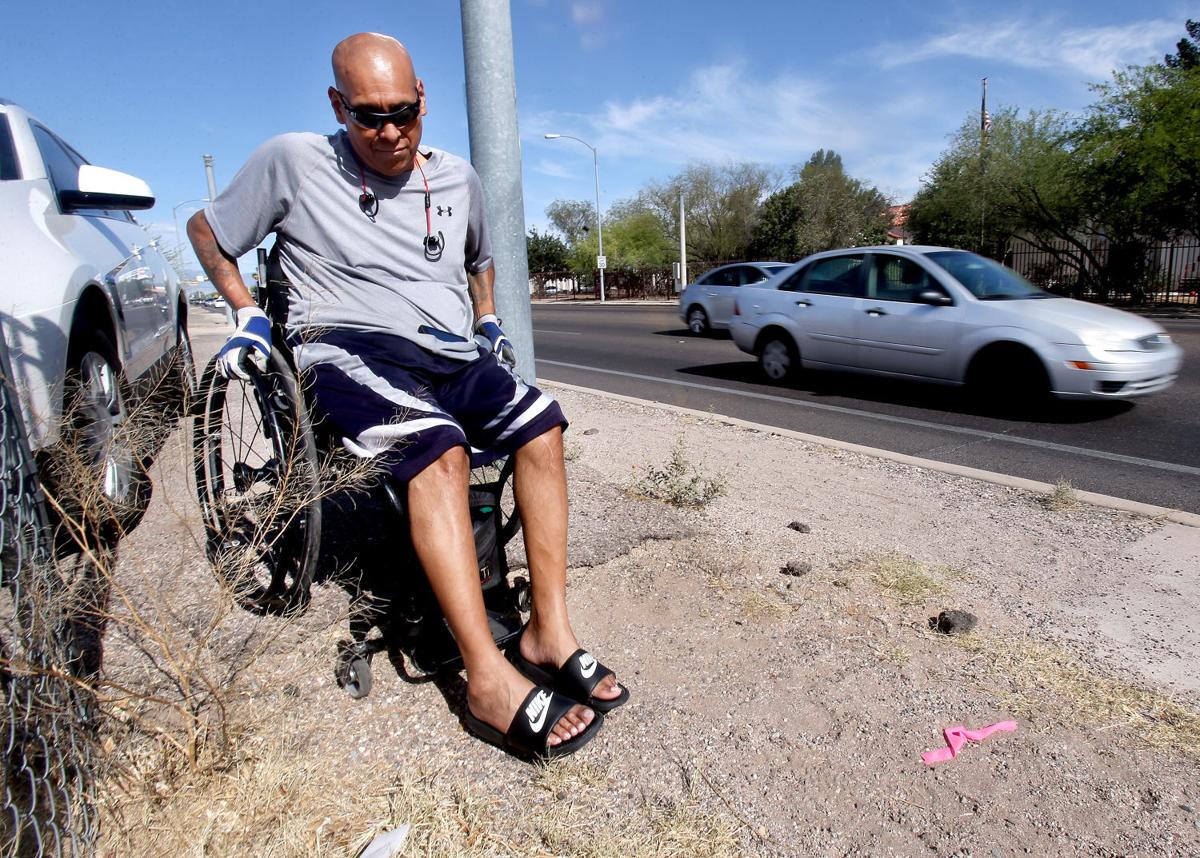 Pete Padilla navigates between a lamppost and a chain-link fence where asphalt turns to dirt along East Broadway just west of Cherry Street. 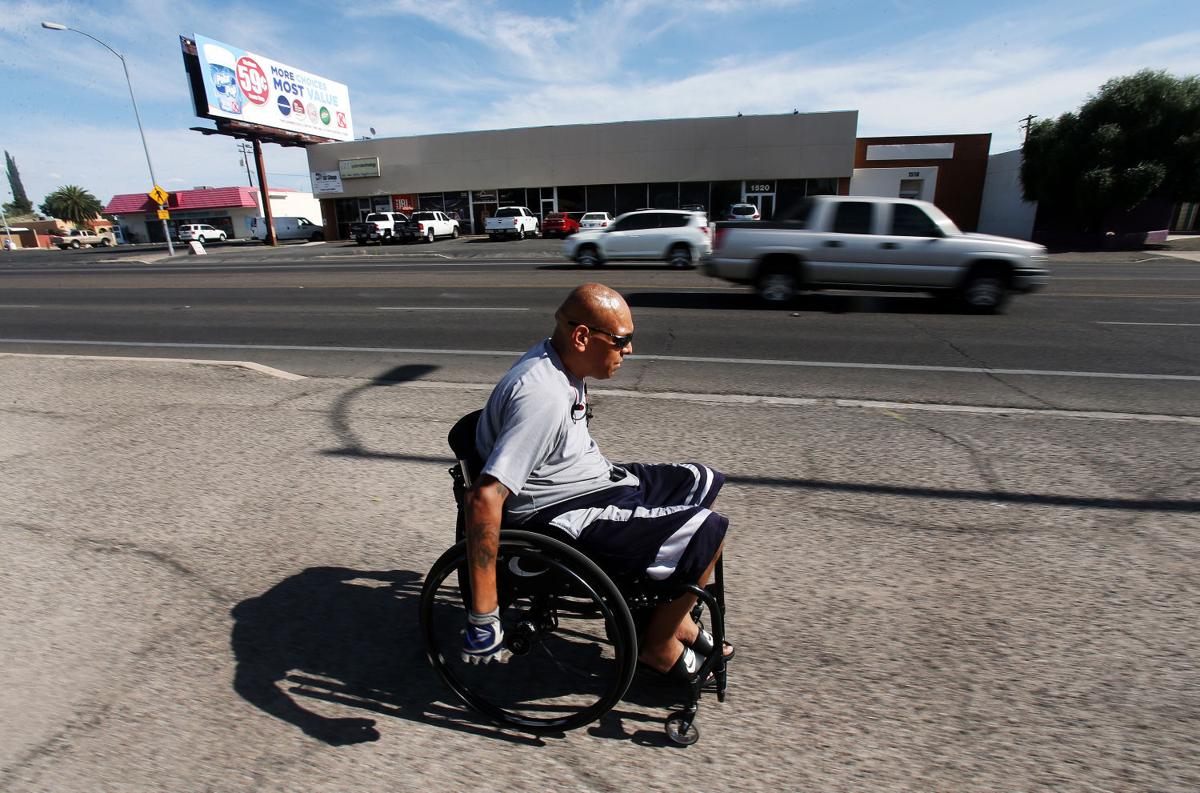 Pete Padilla, an assistant coach with the University of Arizona's wheelchair rugby team, navigates the asphalt terrain along the north end of East Broadway Boulevard, just west of Cherry Street near his home on May 12, 2016, in Tucson, Ariz.

Pete Padilla stopped his wheelchair where the asphalt dropped off to a rutted, gravel surface. He gingerly placed each foot on the gravel, pushed forward with his arms, and for a split second hung off-balance before maneuvering the wheelchair onto the gravel.

A few seconds earlier, this reporter had stepped over the lip in the asphalt without noticing it. But for people who get around in wheelchairs, the stop-and-start sidewalks on some of Tucson’s major roads and the often nonexistent sidewalks in neighborhoods are not so easily missed.

“Certain areas of town, it’s great, it’s pretty easy,” said Padilla, a 47-year-old coach for the wheelchair rugby team at the University of Arizona. But in areas like Broadway between Euclid and Campbell avenues, “it’s pretty rough at times.”

“A lot more accessibility would make life a hell of a lot easier for a lot of people, including myself,” Padilla said.

Continuous sidewalks and curb cuts, which allow people in wheelchairs to access sidewalks from roads, are lacking on South Seventh Street where Matthew Bremekamp, 37, lives.

When Bremekamp leaves his house to go to work at the UA’s Disability Resource Center, the lack of nearby sidewalks means he has to use his neighbor’s unpaved driveway and travel down the street before he can get to a sidewalk.

Looking around town, it appears that “there’s no rhyme or reason for where curb cutouts are or sidewalks maintained,” he said.

Tucson and Pima County have been looking at the issue since at least the early 2000s. Officials with both the city and the county said sidewalks are now included in major road projects, as required by the Americans with Disabilities Act.

Adding sidewalks to road-widening projects may be cost-effective, but Yetman pointed to an “interesting conundrum” created by the practice: When roads get wider, they may become less enjoyable to walk.

The lack of sidewalks is also an issue of equity, she said. In underserved areas, people walk because they don’t have a choice, and those are the places that often have terrible walking conditions.

The Living Streets Alliance worked with local governments to include a dozen projects, which would have added sidewalks to 14 miles of roads at a cost of $12 million, in the bond package that went to voters last November.

However, voters decided against approving the funds.

Funding permitting, local governments are planning to take a whack at the sidewalk deficit through the ADA Transition Plan, which follows a 2012 sidewalk inventory study of Tucson and the Pima Association of Government’s 2014 Regional Pedestrian Plan.

The 2014 report said one of the biggest challenges to building a complete pedestrian network was bringing older areas up to current standards.

“Years of rapid development at a time when pedestrian conditions were not necessarily a high priority has left the greater Tucson region with a legacy of incomplete and missing sidewalks, narrow pedestrian rights-of-way, and some roadways and intersections that are dangerous, or otherwise discourage walking,” the report said.

The Tucson Department of Transportation hired a consultant to conduct a study for the ADA Transition Plan, which is expected to be complete next spring, said department spokesman Michael Graham. When the city has the study, officials will then develop a plan to bring sidewalks into ADA compliance.

In the meantime, the city built 15 capital-improvement and road-recovery projects that laid 376,000 square feet of sidewalk from 2012 through 2015, not including developer-driven projects and maintenance. (See sidebar for a list of sidewalk projects in Tucson slated for 2016 and 2017.)

Most subdivisions in the unincorporated part of Pima County are ADA compliant, given that developers are required to install pedestrian facilities such as sidewalks, said Priscilla Cornelio, director of the county’s transportation department.

Faced with major funding issues, the county has built sidewalks through the Regional Transportation Authority bike and pedestrian programs and the Safe Routes to School federal program, she said.

The county would need $5.5 million to build the 55,000-linear-feet of sidewalk needed near schools in unincorporated areas, she said.

When asked if building sidewalks for people in wheelchairs amounted to special treatment, Bremekamp said critics may not understand how essential good sidewalks are for people who are mobility-impaired, as well as for blind people and those who use walkers.

“Otherwise, people can’t leave their houses, can’t go where they want to go,” he said. “And that’s not fair. That’s a human right.”

Bremekamp said he understands tax dollars are tight and many issues need to be addressed.

“But I can say for sure that this needs to be addressed,” he said.

This year, the city of Tucson is bringing sidewalks into ADA compliance at the following locations:

In 21st century, it's much more than road repairs, traffic lights.

No estimate was made on when the eastbound lanes of I-10 at milepost 244 will reopen.

Down for the Count one of several apps that address problem.

Where the sidewalk ends, troubles begin

Pete Padilla explains what it's like getting around Tucson in a wheelchair when sidewalks and curb cuts are lacking in many areas. Video by Cu…

Sarah Gassen: A leg carved from a tree branch

Working across borders to help people hear, get around.

Will be upgraded, given hardened surface.

Accessibility for all customers is smart business.

Information sessions about a plan to install them to be held.

Road Runner: Do electric-car owners get a free ride?

Where the sidewalk ends, troubles begin

Pete Padilla explains what it's like getting around Tucson in a wheelchair when sidewalks and curb cuts are lacking in many areas. Video by Cu…

Road Runner: If you pave Wilmot, development may come

The road project is generating interest in new southeast-side housing.

Several Tucson streets to be closed to cars during Cyclovia

Pete Padilla navigates between a lamppost and a chain-link fence where asphalt turns to dirt along East Broadway just west of Cherry Street.

Pete Padilla, an assistant coach with the University of Arizona's wheelchair rugby team, navigates the asphalt terrain along the north end of East Broadway Boulevard, just west of Cherry Street near his home on May 12, 2016, in Tucson, Ariz.