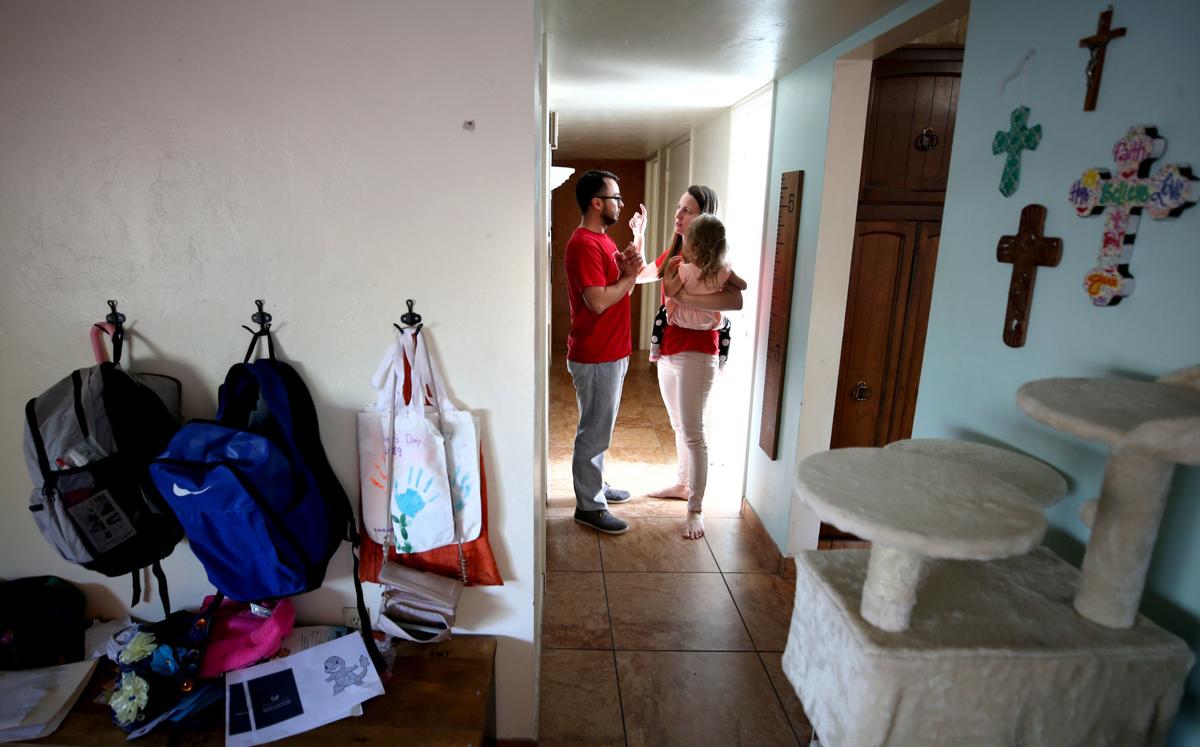 Flowing Wells High School teachers Nate and Tori Rios, with daughter Lenore, say they were able to buy a home only because a family friend rented a dwelling to them at a reduced price for five years, which allowed them to save enough for a down payment. 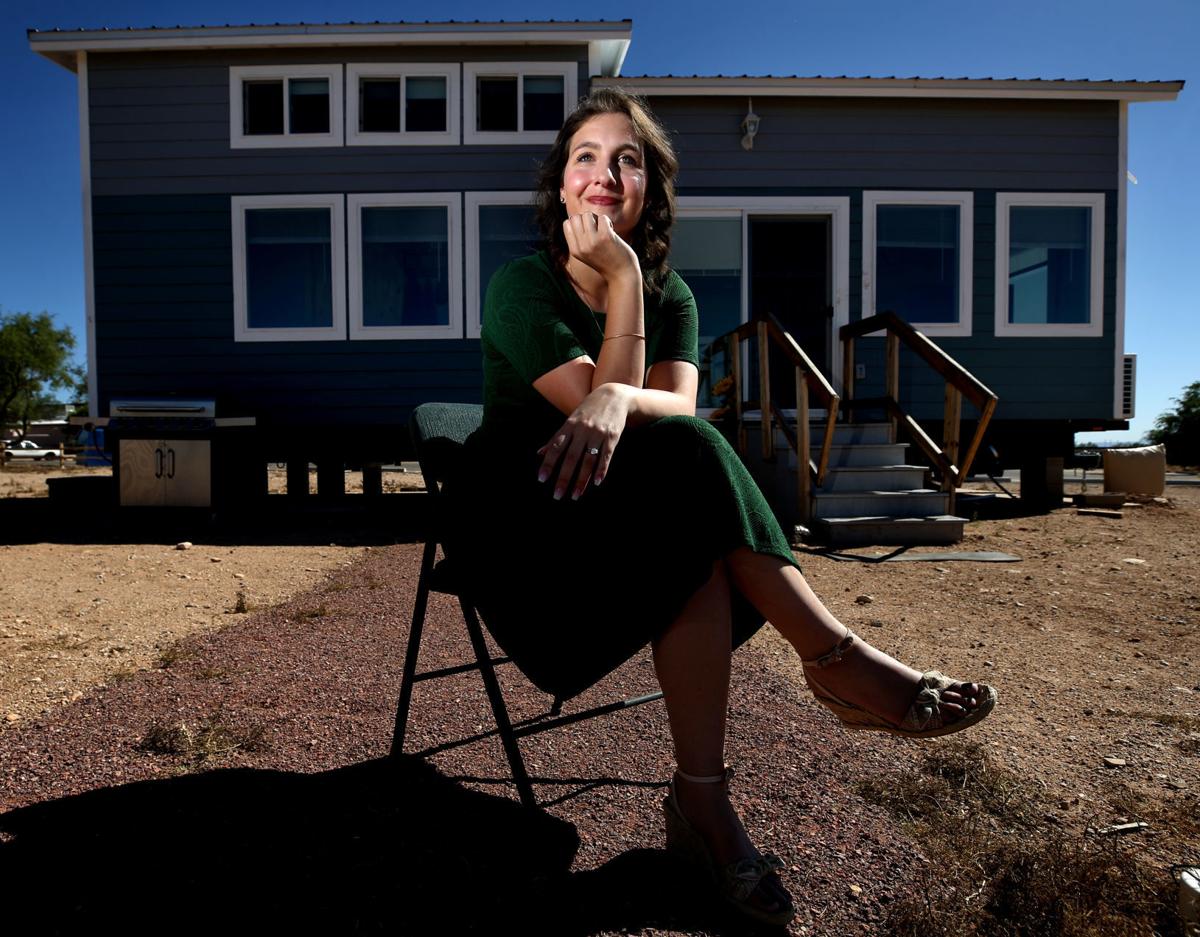 Sydney Scharer, a teacher in the Vail School District, lives with her husband in a tiny home provided by the district. The couple pay $700 a month toward the home’s mortgage and the plot it sits on.

More Tucson families are unable to achieve homeownership status as incomes have failed to keep pace with rising housing prices.

Homebuilders are sensitive to that locally, building on smaller lots and limiting amenities to stay in the low- to mid-$200,000 range.

Still, the inability to save for a down payment is hampering one segment of the population disproportionately.

According to a new study, 1 in 5 teachers is burdened by housing costs.

The median income for primary and secondary school teachers is 27.4% less than that of nonteachers with bachelor’s degrees. Teachers with a master’s degree earn 33.3% less than similarly educated professionals in other fields, housing economist Chris Salviati writes in his report for Apartment List.

“While teaching has long been a comparatively low-paying profession, rapid increases in housing costs have exacerbated the struggle of teachers,” he said. “Interestingly, these wage gaps are not directly correlated with cost of living.”

In Arizona, teachers make an average of 40 percent less than college-educated nonteachers. In New York, where the cost of living is much higher, teachers are only 13 percent behind college-educated peers who are not in the teaching field.

The average teacher salary in Arizona was $48,951 in fiscal year 2018, according to the Arizona auditor general.

“I finally have a comma in my paycheck this year,” said Ali Pierce, an English teacher at Marana High School, who has been teaching for five years. “And I only have that comma in my paycheck because I gave up my prep period to teach an additional course. That is the reality of things.”

She doubts she and her husband, David, who is a manager for Enterprise Rent-A-Car, will be able to buy a home in the near future after two unpaid maternity leaves put a dent in their savings.

“It’s so far out of the picture,” Pierce said.

University High School economics teacher James Lerch is also renting a home and is considering leaving the U.S. to teach abroad, which comes with benefits such as free housing. His wife, Amy Villagio, is a counselor at Pueblo High School.

“When you teach overseas, you tend to make a much higher income and you can save more,” he said. “We wrestle with the idea of going back overseas, as much as I love my job.”

Fifth-grade teacher Sydney Scharer and her husband, Simon Stickroth, moved into one of the Vail School District’s tiny homes because it was the only option they could afford in the area.

The couple pays $700 a month toward the home’s mortgage and the rental plot it sits on, said Scharer, who teaches at Senita Valley Elementary.

They’re saving hundreds of dollars a month in housing costs, compared with the “not nice” apartment they rented for a year in Tucson proper.

In 2017, the Vail School District told the Star of its plans to create a tiny-home village of sorts to ensure that its teachers can live in the area, which lacks affordable housing options.

The tiny homes are located on a plot of land owned by the Vail School District.

“It’s amazing,” Scharer said. “It also makes me part of the Vail community. ... I love Vail and being in Tucson, I wasn’t really part of that.”

A generous friend was the reason Nate and Tori Rios were able to buy a home.

The Flowing Wells High School teachers rented from a friend’s father at a reduced cost for five years.

“The fact of the matter is without someone’s kindness ... we wouldn’t have been able to save the money to put a down payment on a home,” he said.

Most of their colleagues who own homes have spouses in other fields.

Salviati, the housing economist, says these stories should alarm policymakers.

“This could have a tremendous impact on the future of the U.S. education system,” he said. “If not addressed, this issue may deter young educators away from the teaching profession, with significant negative implications for the quality of the American education system.”

“It is remarkable that aggregate new-home pricing has remained stable as the costs of both labor and construction have increased by about 15% in the last year,” said Kneup, owner of Bright Future Real Estate Research LLC. “Of course, builder margins also get squeezed in this equation, which should concern everyone in the industry since smaller margins make Tucson a less desirable choice for corporate capital allocations.”

Star Opinion: Tiny homes in Vail that shouldn't be necessary, but are

BUCKEYE — A former deputy fire chief with the Rio Verde Fire District has died in a car crash in Buckeye two weeks after his retirement, autho…

Lawmaker aims to give Trump free pass in 2020 Arizona primary

The House speaker said the move came at the request of the Arizona Republican Party.

Re: the May 26 article "Teachers hit especially hard by soaring home prices here."

Despite dissatisfaction, 68% of those surveyed rated the current state of economic development in Pima County as average or good.

Education Notes: Where Tucson students, parents can get free breakfast, lunch this summer

Gov. Doug Ducey and the Arizona legislature have touted their decision to invest $528 million into the state’s public education system next fiscal year as a win for educators and students.

But local school district leaders say the budget — though better than what they have had to work with in recent years — still deeply undercuts the urgent needs and issues facing Arizona’s public schools.

The decision to split the board presidency into six-month terms was made to show the community wasn't divided into alliances. However, the mid-year election wasn't without controversy.

The Tucson Unified School District shared an image of the turf field's sideline vandalized with writing.

TUSD's sex ed would be most LGBTQ inclusive locally, if update passes

The TUSD governing board is due to vote this month on a update to the sex ed or "family life" curriculum.

The leader of the Vail School District credits his success to community support.

Flowing Wells High School teachers Nate and Tori Rios, with daughter Lenore, say they were able to buy a home only because a family friend rented a dwelling to them at a reduced price for five years, which allowed them to save enough for a down payment.

Sydney Scharer, a teacher in the Vail School District, lives with her husband in a tiny home provided by the district. The couple pay $700 a month toward the home’s mortgage and the plot it sits on.