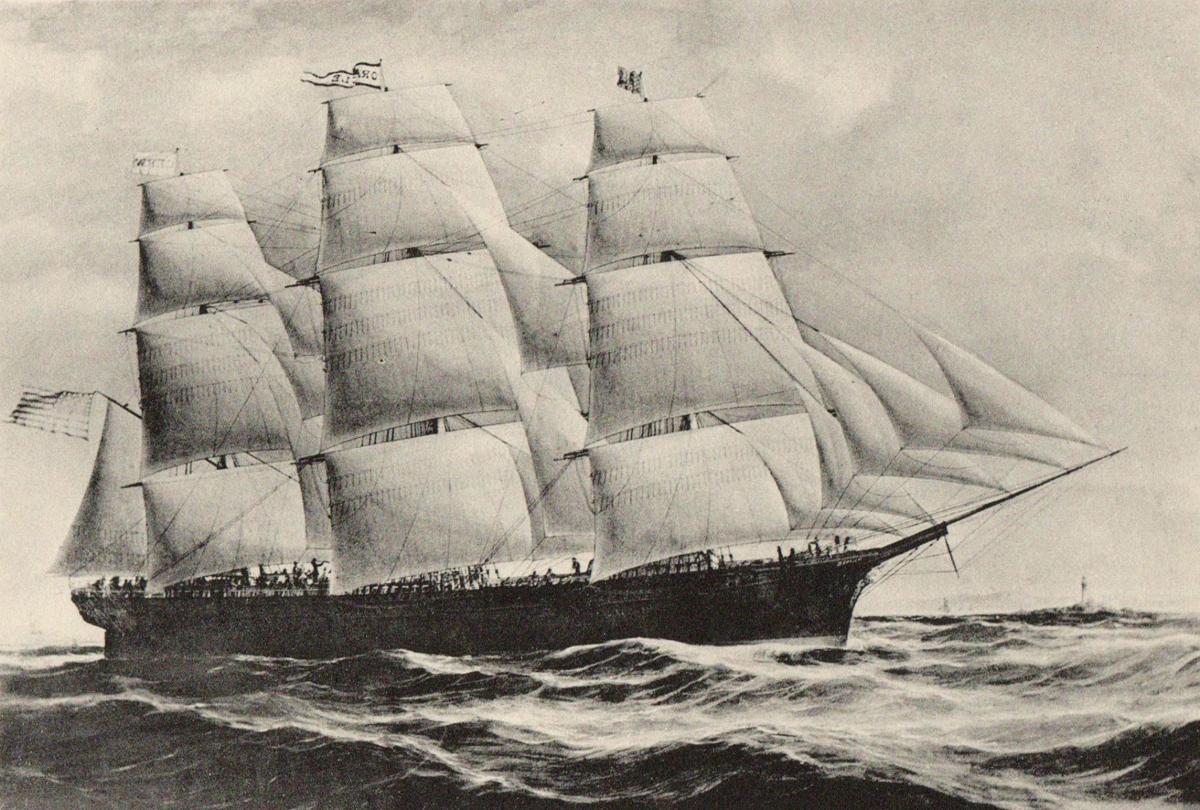 The only known image of the clipper ship Oracle, built in 1853, is found in the book “Master Mariner of Maine,” page 51, published by Anthoensen Press. 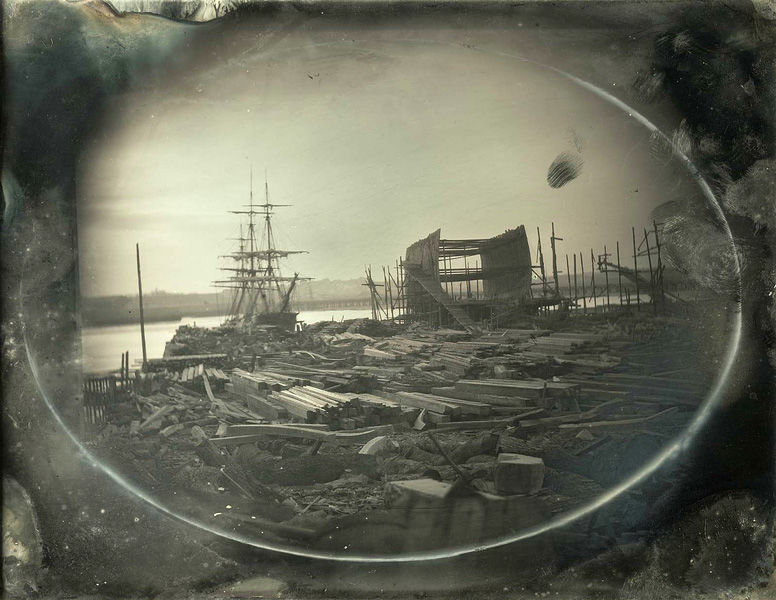 This shipyard (Donald McKays, circa 1855, Boston) is an example of what Champman & Flint’s shipyard, where the Oracle was built, looked like in 1853.

An ad for Commander Albert D. Wood and the clipper ship Oracle in the Daily Alta (San Francisco) California, Oct. 30, 1858. Note the ship is called Oracle not The Oracle. 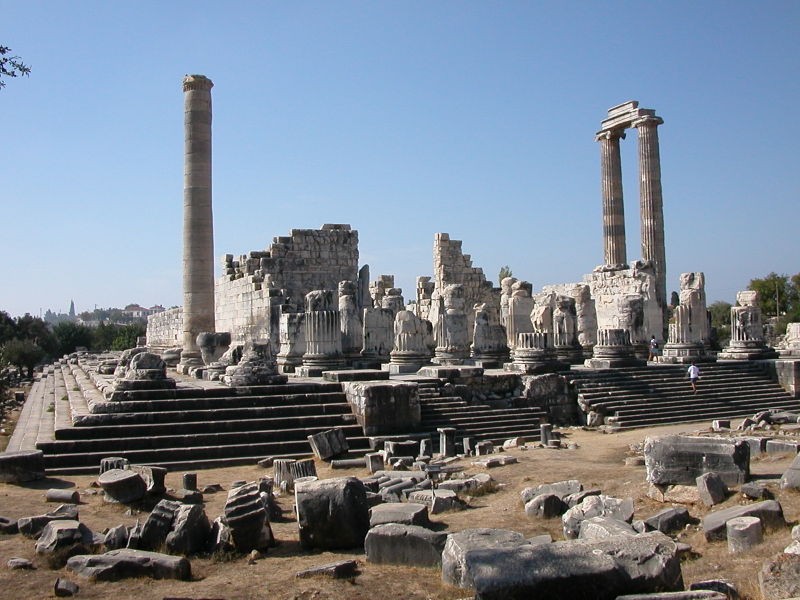 Oracle’s name may have been inspired by the Temple of Apollo in Didyma, in present-day Turkey.

By David Leighton Special to the Arizona Daily Star

Oracle Road, like the town of Oracle, wouldn’t have its mystical Greek name if a teen from New Brunswick, Canada hadn’t ridden a famed clipper ship around Cape Horn in the late 1850s on his way to find adventure, wealth, and eventual doom.

This is a tale in three sections: the history of the clipper ship Oracle and its wayfaring captains; the story of the immigrant from New Brunswick who staked claims on the north side of the Santa Catalina Mountains; and the respective, final days of the ship and its onetime passenger.

THE SHIP AND ITS CAPTAINS

In 1852, accomplished sea captain Charles Everett Ranlett, born in 1816 and first went to sea at the age of 13, returned home to Thomaston, Maine, after commanding the ships Miltiades and Ionian.

There, his friends Isaac F. Chapman and Benjamin Flint, of the ship building firm Chapman & Flint, proposed a partnership to build a clipper ship if he would supervise the construction and captain it.

The firm had built the Miltiades and Ionian and later would construct the Pactolus, but had no experience constructing clippers, so Ranlett recruited master shipbuilder John McDonald and hired naval architect Samuel Hartt Pook to design the ship.

Of the ships built by Chapman & Flint, and later Flint & Co., five had names connected with the Greeks or Greek mythology. The Miltiades was named for Miltiades the Younger, Greek ruler of Thracian Chersonese, now called the Gallipoli Peninsula, in western Turkey.

The Pactolus almost certainly derives its name from the Pactolus River that ran through or near Ionia, a Greek colony in present-day western Turkey, and the Ionian was very likely named after the Greek tribe that settled in Ionia.

The Greek colonists known as Ionians worshipped at an oracle — a shrine dedicated to a particular god where people went to consult a priest or priestess in times of trouble or uncertainty — called the Temple of Apollo at Didyma in present-day Aydin Province, Turkey.

This oracle was considered by many to be the second most important in the ancient Greek world, after the oracle at Delphi, and was visited by important people of the time including King Croesus of Lydia and King Necho I of Egypt.

The only person known to be connected with all five ships with Greek names was Flint, making him the likely choice for the naming of the Oracle.

Capt. Ranlett wrote about its maiden voyage: “The ship was launched in November, 1853, sailed for Mobile (Alabama), where I loaded for Liverpool (England), and sailing for that port I arrived after a stormy passage of thirty days.”

The Oracle traveled to many ports across the globe including Melbourne, Australia; London, England; Bombay (Mumbai), India; and Shanghai, China. The ship carried both cargo and passengers.

From China, tea and silk were loaded on the ship in the middle of the Tai Ping Rebellion, and at a stop at a port in India, cotton was stowed in the hull of the vessel by longshoremen “who had come from the coast of Africa.”

The Oracle was a temperance ship and every passenger who traveled on it signed a contract that forbid bringing “any intoxicating liquor on board.”

Ranlett made his final run in the Oracle, docking at Liverpool, on May 6, 1856.

The clipper was fast: In 1866, it was reported that on the Oracle, Wood “made the run from San Francisco to Honolulu in eleven days, the fastest run of the season. ... This is the third time the same vessel had beaten every other ship sailing with her.”

During the U.S. Civil War, in November 1862, the Oracle was transferred to British registry, possibly because sailing under the British flag prevented the ship from becoming a target of Confederate privateers.

An article in The Friend magazine in December 1864 states that Wood “is a good loyal Union man” and “well read, intelligent and business-like, and withal not ashamed to have it known that he sails his ship on the strictest tee-total (abstinence of alcohol) principles.”

Albert Weldon was born to John and Cynthia L. (Wood) Weldon around 1840 in Dorchester, New Brunswick, Canada. His father was a carpenter and his mother raised six children in a Methodist home.

At an early age Albert, the youngest, went to sea, traveling on the ship of his uncle, Capt. A.D. Wood, around Cape Horn to get to California.

Sources list different years for Weldon’s trip on the Oracle, but he probably traveled on the clipper between 1857 and 1860. His uncle commanded the ship from 1857 to 1867, and Weldon is known to have been in California by July 1860, when he was living in Sacramento County and working as a miner.

The 5th California Infantry, under Col. George W. Bowie (namesake of Fort Bowie), was attached to the California Column and traveled south to Fort Yuma, then marched up the Gila River and arrived in Tucson in July 1862.

Weldon was on duty for months at the Point of Mountain stage station, several miles northwest of Tucson, and left Tucson in December for what would be called Fort Bowie. He was honorably discharged at Mesilla, New Mexico, on Nov. 30, 1864.

After his time in the service, he returned to California and worked in the mining and lumber businesses for many years. “It was while engaged in the latter that he lost his foot by its coming in contact with a big circular saw.”

In 1876, he returned to Arizona. In the next couple of years, he partnered with Irishman James “Jimmie” Lee, who had arrived in Tucson around 1854, and traveled into the Santa Catalina Mountains, where Weldon located a mining claim on the north side of the range and named it the Oracle, in honor of his uncle’s ship.

Alexander McKay, a Scotsman who had immigrated to the U.S. in 1866 and arrived in Tucson in 1877, joined Weldon at his mining claim in late 1878.

Soon after he found two mines nearby, one on Christmas and a second on New Year’s Day, and named the mines Christmas and New Years. McKay would soon build a one-room house, the first in the area, and from there the town grew.

Among the first settlers in the area was Edwin S. Dodge, who began a lodging house. Dodge applied for a post office and wanted to call it Acadia or Arcadia, but was rejected and Oracle was suggested instead.

From the Oracle area, Weldon and his mining partner McKay would make much money in the Quijotoa Mining District, northwest of Sells.

When Weldon committed suicide on Feb. 1, 1895, in Phoenix, he had little left. It’s believed that Weldon is buried at the Pioneer and Military Memorial Park in Phoenix.

After his uncle, Capt. Wood, wrote to his sister in 1867 that he was “rather sick of the sea,” he retired, going on to run two California newspapers, The Rescue and the Sacramento Daily Record, later known as The Sacramento Union.

The Oracle was eventually sold in 1872 to a Peruvian account and was involved in transporting Chinese laborers to the guano deposits at the Chincha Islands, off the coast of Peru. The ship was finally lost around 1875.

Note: The fifth ship having a name related to the Greeks or Greek mythology was another boat named Oracle built by the same shipbuilding firm; it was launched in 1876 and is commonly mistaken for the earlier Oracle ship that brought Albert Weldon to California.

The area where Fred Roberts sold lots, near Alvernon Way and Fifth Street, was considered too far out to work.

Arizona pioneer spent most of his career in mining and law enforcement.

Faced challenges with steadfastness and humor.

The only known image of the clipper ship Oracle, built in 1853, is found in the book “Master Mariner of Maine,” page 51, published by Anthoensen Press.

This shipyard (Donald McKays, circa 1855, Boston) is an example of what Champman & Flint’s shipyard, where the Oracle was built, looked like in 1853.

An ad for Commander Albert D. Wood and the clipper ship Oracle in the Daily Alta (San Francisco) California, Oct. 30, 1858. Note the ship is called Oracle not The Oracle.

Oracle’s name may have been inspired by the Temple of Apollo in Didyma, in present-day Turkey. 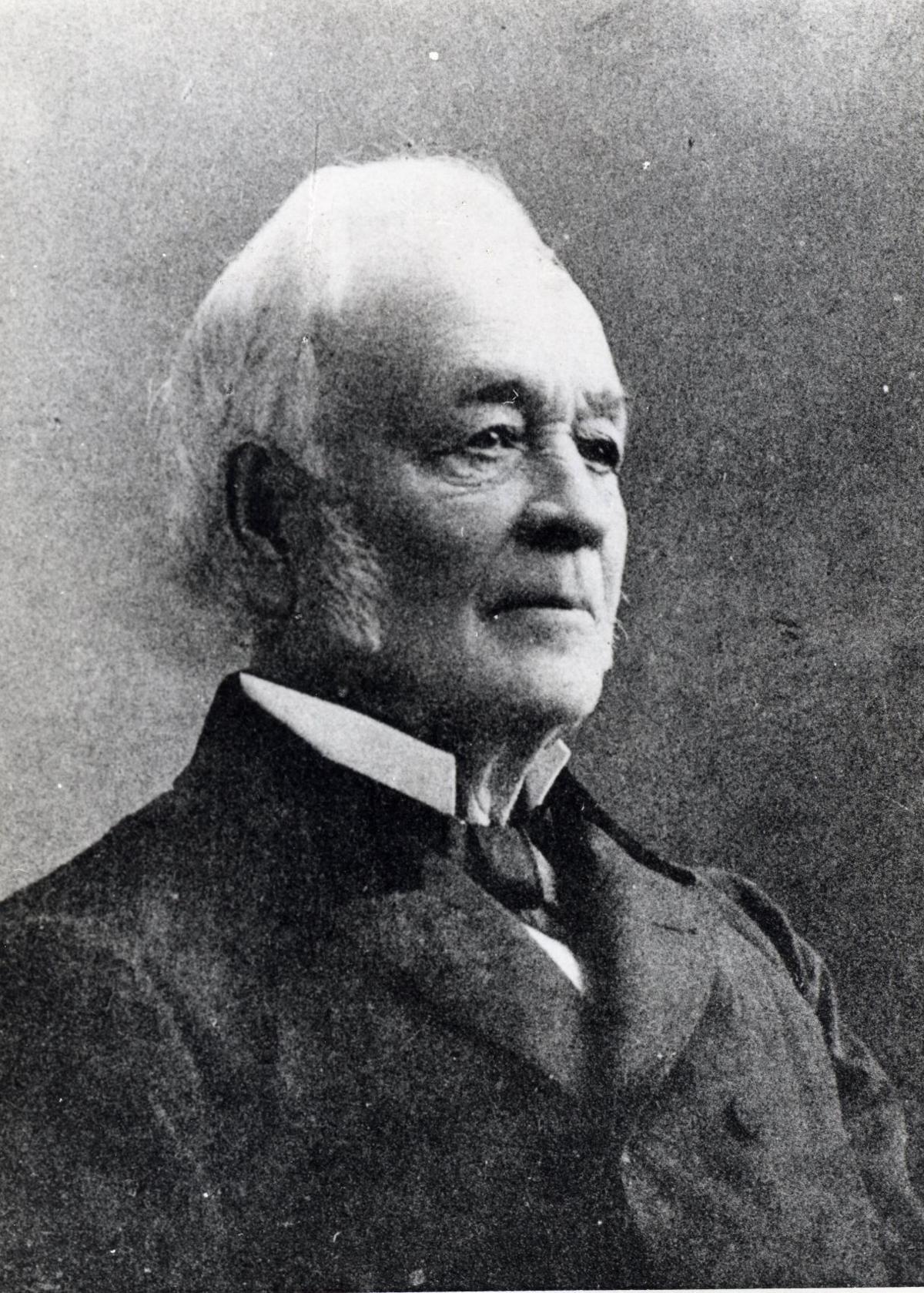