Editor's note: This story was originally published on Aug. 2, 2020.

When the monsoon misses you, it’s hard not to take it personally. Even climate scientists sometimes feel the sting of rejection.

“The monsoon can be a very emotional thing, and I’m susceptible to that emotion, too,” said Mike Crimmins, a researcher and associate professor with the University of Arizona’s Department of Soil, Water and Environmental Science. “You just feel cheated every summer, because it’s not the summer you were hoping for.”

But that annual disappointment is probably just your memory playing tricks on you. According to preliminary results from a study now underway by Crimmins and his colleagues, there are no cursed locations in the Tucson area where summer rains consistently refuse to fall.

“Everyone thinks they have a doughnut hole in their part of the city,” he said. “We don’t see a systematic doughnut hole.”

What they see instead is a lot of variability, with some parts of town getting soaked one year and left largely dry the next. Basically, Tucson is a doughnut with a hole that moves around at random.

“It does show up during the monsoon season, but it’s not always in the same place,” Crimmins said. “And it isn’t there every monsoon season.”

Meteorologist Carl Cerniglia has a highly technical term for that: “dumb luck.”

Since summer thunderstorms tend to form over mountains, people living closest to the Rincons and the Catalinas can generally expect “more precipitation in the long term,” he said. They also get more “snow events” in winter, but that’s more a function of elevation.

When it comes to monsoons, Cerniglia said, “There’s a basic pattern at play, and there’s a bit of dumb luck.”

And as famous magician and skeptic Penn Jillette is fond of saying: “Luck is probability taken personally.”

Which brings us back to the doughnut-hole question.

As part of his work at the university, Crimmins serves as an investigator for the National Oceanic and Atmospheric Administration’s Climate Assessment for the Southwest program, a Tucson-based regional collaboration between the UA and New Mexico State University.

He said he and his CLIMAS colleagues have talked about a study like this for several years, but they “turned up the gas” on the idea recently.

They’re now compiling and analyzing all of the available data from the last 20 years or so, from official weather service totals and gauge readings from the Pima County Regional Flood Control District to backyard rain observations from several volunteer networks, including one called Rainlog.org that Crimmins helped launch in 2005.

He said the website might receive more than 300 rain reports during a particularly strong storm, but it relies on a core group of 15-20 amateur observers who submit their readings religiously every day, even when they have nothing to report but zeros. That information can be just as valuable, Crimmins said. “It’s one thing to know when it rains, but it’s just as important to have a record of when it doesn’t rain.”

The crew at CLIMAS also collects weather readings at their homes as kind of a “spectator sport,” Crimmins said. If they’re not bragging about their brimming rain gauges, they’re “rage observing,” as a storm skips them and dumps on someone else’s part of town.

So far this summer, Crimmins is getting creamed.

As of last week, this year’s monsoon had only produced about three-quarters of an inch of rain at his east-side home near Broadway and Camino Seco.

Meanwhile, backyard observers just 5 miles to the northwest of him have already soaked up a full 4 inches and counting.

“A part of town already has half of their annual rainfall, and it looks like the rest of us are going to struggle to catch up,” Crimmins said.

Of course, not all neighborhoods are created equal. Tucson is dotted with “microclimates” — subtle, local differences in temperature and humidity, based on terrain and other factors.

For example, the weather service’s Cerniglia said humidity levels tend to be higher in the area along the Santa Cruz River where Tucson’s treated effluent is released.

And there’s a slightly elevated stretch of Orange Grove Road that stays warmer at night and doesn’t dip below freezing as much in winter, which is why farmers used to grow citrus there, he said.

If it’s cold you’re looking for, Cerniglia said, Catalina State Park and Tanque Verde High School regularly see some of the lowest temperatures in the Tucson area, as cool air pours down from the Catalinas.

“Cold air is much like water. It follows the path of least resistance and seeks the lowest point,” he said. “Something to think about if you’re planning to move somewhere and you want to save a little money on air conditioning.”

Some microclimates are simply the result of land use. That’s why, on a typical sunny day, the temperature will be cooler in the grass at Randolph Golf Course than it is just across Broadway in the parking lot of El Con Mall.

Put enough parking lots, roads and buildings together in one place like that, and you get what’s known as the urban heat-island effect, which is driving up temperatures — particularly overnight lows — in Tucson, Phoenix, Las Vegas and other developing Southwestern cities.

Even in undisturbed desert, Crimmins said, changes in vegetation and soil color can alter the temperature and produce some microclimatic effects.

He said not much research has been done on the microclimates of Tucson, in part because studying them requires “dense networks of instrumentation.” Besides, there’s little evidence to suggest that such small, local variations have any measurable impact on the regional and global forces that drive Southern Arizona’s summer thunderstorm activity, he said.

In other words, microclimates are not to blame for the lousy monsoon we’ve seen so far this year.

But take heart, Tucson: Crimmins insists the stormy weather will return eventually, no matter what part of town you live in. “On average, over time, it does even out,” he said.

Before long, he expects to have a study to back him up on that. Crimmins said the CLIMAS team hopes to finish its analysis by next summer, just in time for monsoon season.

Farewell, monsoon season: Photos of the 2020 season in Tucson

Not quite a sky mall: Tucson inventor setting up shop in old airliner

Retired Raytheon engineer hopes to open a one-of-a-kind aviation-themed store inside the fuselage of an actual 747 jumbo jet parked near I-10 about 30 miles northwest of Tucson.

Federal regulators have agreed to reconsider the Sonoran Desert tortoise for endangered species protection, after environmentalists sued over a 2015 decision not to list the reptile.

Both May and July 2020 set records as the hottest in Tucson. Not only that, but this summer's AWOL monsoon season is the fourth-driest on record at this point.

A research team led by the University of Arizona wants to reshape desert food production with native crops and new farming techniques tailored to global warming.

The National Weather Service says Tucson could start to see some monsoon action next week. For now, though, the forecast calls for more record heat.

Professional forecasters have nothing on this Tucson monsoon watcher 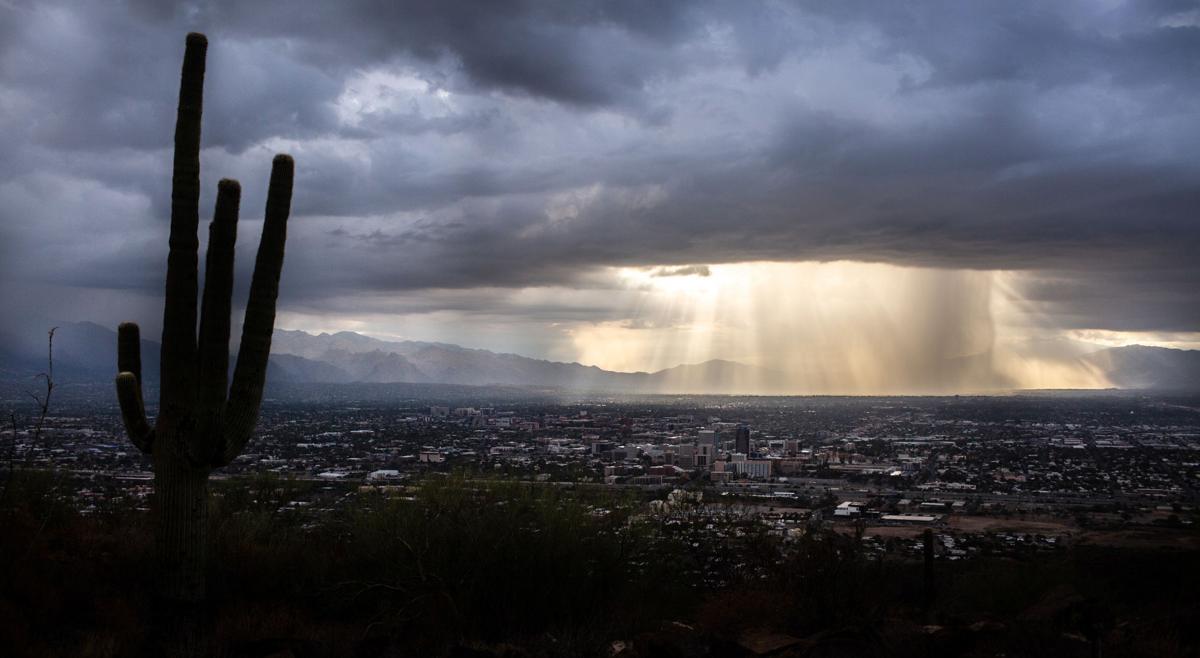 Tucson is dotted with “microclimates” — subtle, local differences in temperature and humidity based on terrain and other factors. 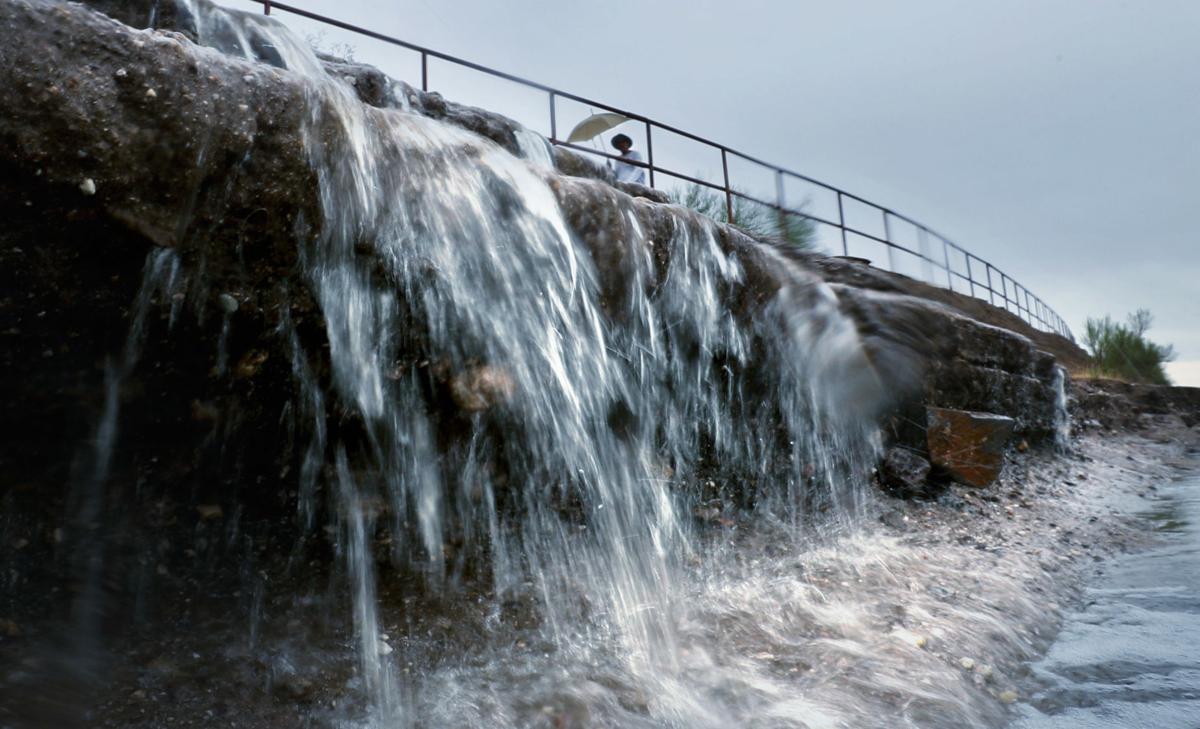 According to preliminary results from a study now underway by a local researcher, there are no cursed locations in the Tucson area where summer rains consistently refuse to fall.