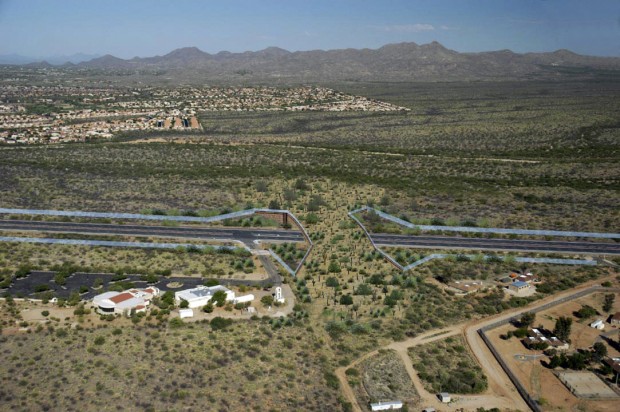 Artist's rendering of a proposed wildlife overpass looking west from the south end of Catalina across Oracle Road. 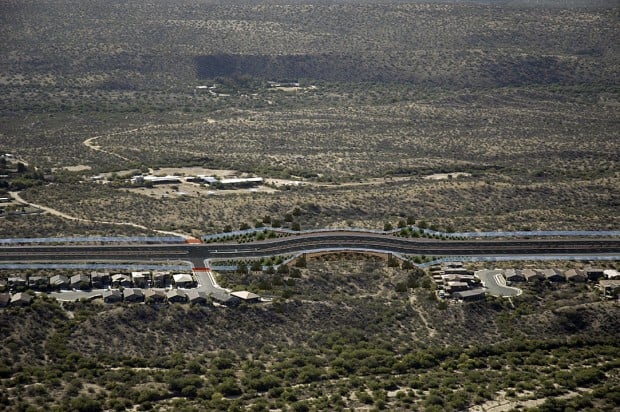 Artist's rendering of a proposed underpass at a drainage coming out of Big Wash and across Oracle Road directly into Catalina State Park.
Tony Davis Arizona Daily Star

Starting in 2013, authorities will build two steel and concrete underpasses and an overpass between the Tortolita and Catalina mountains to make it easier for wildlife to cross the highway. A three-mile stretch of Oracle, also known as Arizona 77, in that area will be fenced, to funnel wildlife into the crossings.

The crossings are aimed at maintaining traffic safety and preventing cars from killing wildlife as expected growth nearly doubles the traffic load along Oracle by 2030. They were approved by a 7-0 vote of the Regional Transportation Authority's governing board.

This is the first major project dipping into a $45 million pot of money that was set aside to protect wildlife crossings at the time voters approved a half-cent sales tax increase for the Regional Transportation Authority in 2006.

The work will be done in conjunction with a widening of Oracle from four to six lanes for a six-mile stretch, between Tangerine Road and the Pinal County line. The wildlife crossings will be about 190 feet long by 150 feet wide. Doing the crossings at the time of the widening keeps the state from having to retrofit the road later at more expense, said Siobhan Nordhaugen, an Arizona Department of Transportation special-projects manager.

"We'd like to make highways more permeable to wildlife," said Ray Schweinsburg, research program supervisor for the Arizona Game and Fish Department. That agency, along with ADOT, the RTA staff and five environmental groups, spent several years planning the crossings. "Part of what makes Arizona so unique are its wildlife values. We don't want to lose that," he said.

In particular, the crossings are meant to protect bears, deer and mountain lions that roam between the two mountain ranges.

The crossings will be flanked on the east by Catalina State Park and U.S. Forest Service land, and on the west by state-owned land that Oro Valley has committed to preserving as it helps plan the future of the huge, state-owned Arroyo Grande parcel. There, nearly 16,000 homes have been proposed.

"Arizona Game and Fish and ADOT have said we need to do a lot more in this area and that they'd do more, with more money," said Carolyn Campbell, director of the Coalition for Sonoran Desert Protection, one group involved with the crossing project. "Now that we have money, we can design them the way we want - not just what we can afford. We think we will be serving the purposes of what the voters approved, as opposed to limping along as best we can."

Repeated studies since 1986 have said the Catalina-Tortolita area is one of the key linkages in the state for wildlife movement, state officials and environmentalists said in a proposal for this project. While the area is in relatively good shape for wildlife today, within 10 years, continued sprawling development will sever this crossing "unless aggressive measures are taken at once," said a 2008 report by Northern Arizona University.

"In our work on 16 linkage designs in the state, we have not seen rates of development of natural land similar to what we have seen in this linkage. Future urbanization should not occur on private or state land" within this area, the NAU report said.

This kind of uninterrupted connection is required to sustain viable habitat, reduce pollution into washes and other aquatic areas, and reduce threats to wildlife such as pets, lighting, noise, nest predation and parasitism, said the state proposal. Without the crossings, some species in the Tortolitas may be driven out and the possibility of inbreeding increases, the proposal said.

Similar wildlife crossings are popping up increasingly across Arizona and the West. The state has built or planned 17 underpasses on Arizona 260 near Payson to accommodate elk, for instance. It is building three crossings near Hoover Dam to help desert bighorn sheep. More are planned for numerous state and federal highways in Arizona, including Interstates 40 and 17, U.S. 95 and 89 and Arizona 64.

The Tortolita-Catalina project will include the largest wildlife overpass built in Arizona and the first one built specifically for deer. Such crossings also are or will soon be in use in Washington state, Montana, Utah, Nevada and in Canada and Europe, officials said.

Artist's rendering of a proposed wildlife overpass looking west from the south end of Catalina across Oracle Road.

Artist's rendering of a proposed underpass at a drainage coming out of Big Wash and across Oracle Road directly into Catalina State Park.
© Copyright 2021 Arizona Daily Star, PO Box 26887 Tucson, AZ | Terms of Use | Privacy Policy
Powered by BLOX Content Management System from TownNews.com.
You don't have any notifications.