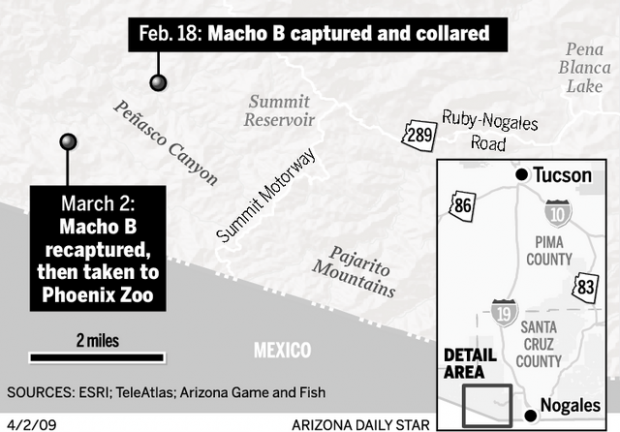 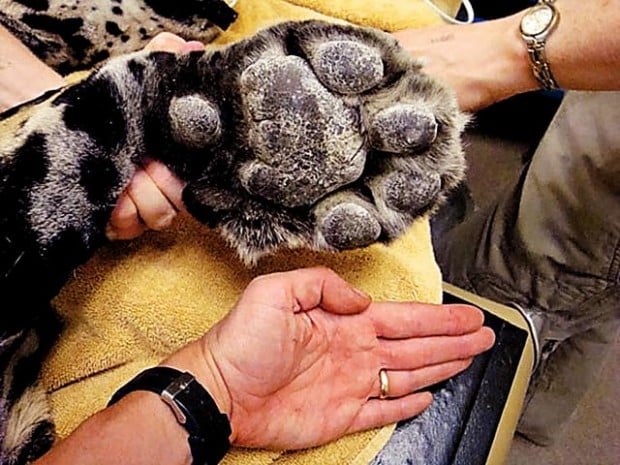 A trap the state says inadvertently snared the last known wild jaguar in the United States actually was baited with female jaguar scat, a member of the Borderlands Jaguar Detection Project says.

Janay Brun told the Star that on Feb. 4 she put the scat at the site of the trap that two weeks later snared the male jaguar, known as Macho B. He was released but recaptured 12 days later, on March 2, because he showed signs of poor health. He was euthanized that afternoon.

Brun, 37, said she spoke to the Star because she thinks she helped cause the death of Macho B. "That jaguar meant a lot to me, and the fact that I mindlessly participated in this — it's a regret I'll have for the rest of my life."

She said she put the scat out in the presence of a state Game and Fish employee and Emil McCain, a biologist for the project. Brun alleges that McCain told her to place the scat at the site.

In two interviews with the Star this week, McCain vehemently denied her allegations. On Tuesday, he said Brun was fired from the project within the last month and was "completely unreliable in the past and untrustworthy." On Wednesday, he said the project ran out of money to pay her and that he was waiting to meet with Brun to tell her that.

The Star is not naming the Game and Fish employee Brun says was present when the scat was placed because it has not been able to reach the person.

The state Attorney General's Office has taken over an investigation of the circumstances of the jaguar's capture from Arizona Game and Fish. The game department, which announced the investigation Tuesday night, would not elaborate.

Project workers have used female jaguar scat to attract jaguars, McCain and others said this week. In 2004, the project began placing scat at locations of motion-sensing cameras where they were attempting to photograph jaguars, two former volunteers said. Jaguars and other cats use scents as a way to communicate, and female jaguar feces may attract male jaguars.

The borderlands jaguar project obtained female jaguar scat from the Phoenix Zoo in November and December of last year and from the Reid Park Zoo on Feb. 18 of this year, officials of both zoos told the Star this week. They said they understood the scat would be used to attract jaguars to cameras, not snares.

On Dec. 10 of last year, in an e-mail exchange forwarded by Brun, McCain sent her an e-mail saying he "just got a package of female … jag scat. Am thinking about placing it under a certain tree. You concur?"

"Si," Brun replied in an e-mail nearly an hour later.

Brun, of Arivaca, is out of state taking care of a family matter. But she said by phone and e-mail that she is speaking up because of the guilt she feels over the death of Macho B, whom she had been studying since she accidentally saw him in 1999.

"I felt guilty as all hell that I never questioned Emil enough, that I didn't go back and set the snares off or do something to get them out of there," said Brun, who has been a paid, part-time field technician for the jaguar detection project.

McCain denied having told Brun to place jaguar scat at the snare site and said he didn't know that she had done it.

"I'm extremely shocked that she would have said that or put scat in that snare," McCain said. "That snare was obviously for mountain lion and bear purposes, not for jaguar research." Preparing for capture

E-mails obtained through public-records requests to Arizona Game and Fish and the U.S. Fish and Wildlife Service make clear that in the two weeks before Macho B was captured, McCain and others were preparing to capture a jaguar, even though subsequently officials emphasized the capture was inadvertent.

On Feb. 3, the Game and Fish employee and McCain received e-mails from veterinarians Roberto Aguilar and Sharon Deem suggesting what dosages of which drugs to use to sedate a jaguar.

McCain followed up on Feb. 5 with an e-mail to Deem and the unnamed Game and Fish employee clarifying that the employee "is not trying to catch a jaguar, but he is working on a mountain lion and black bear study in an area where he may inadvertently encounter a jaguar."

On Feb. 13, McCain wrote an e-mail to Blake Henke of North Star Science and Technology, who provided the radio collar that five days later was placed on Macho B.

"I wanted to thank you for getting the donated jaguar collar back to me so quickly," McCain wrote. "I also wanted you to know that we have again started trapping, and that there is fresh jaguar sign in the area."

On Feb. 16, McCain wrote to the Game and Fish employee and Henke: "At this point I think that for the week long trapping periods in the area where we may capture a jag, I think we should leave that collar (turned) on. Especailly (sic) given the remmoteness (sic) of the area, the lack of internet or phone access and the once in a lifetime change (sic) to collar a AZ jag, I think it is prudent to be 100% sure the collar is on." Naive about traps

As Brun described the scent-baiting event, it occurred on a cold evening, after she, McCain and the Arizona Game and Fish employee had spent most of the day hiking in rugged hills northwest of Nogales, Ariz. The trio checked sites where the borderlands project had set camera traps to photograph passing jaguars and where Game and Fish had set snares for the mountain lion and bear project, Brun said.

"Emil said to me, 'Janay, put the scat over there,' " Brun recalled, referring to the area of the snare trap. "I was very naive about what the traps were. We'd used the scat before at the (camera) traps for two months in Macho B's territory last year and no jaguars had showed up. I didn't think he would be back in the area."

On Feb. 21, three days after Macho B's capture, she said she went to the capture site and saw what she later described as a tree with jaguar claw and tooth marks running up and down it.

"They told the story of how he tried to climb the tree to pull the cable off his paw, only to be pulled down to the ground by the same cable," Brun wrote in an e-mail to the Star, describing the braided, metal cable that is used to snare an animal by a limb. "I found pieces of his claws, including a tip, embedded in the bark. The 'padding' on the cable was electrical tape. This is done to ensure that the cable does not slice through the animal's skin, bone, ligaments and joints as it fights to get free. The loop of the cable remained taut against his paw, cutting off circulation."

In his interview on Tuesday, McCain said Brun had "done a very dirty trick here to make this information public without talking about it first."

"This particular individual has been completely unreliable in the past and untrustworthy," McCain said.

Brun has worked as a volunteer and paid employee for the borderlands project since 2001. But McCain said the project fired Brun sometime in the past month.

Brun said she had no knowledge of having been fired. She provided the Star an e-mail exchange between McCain and her from March 19 and 20 in which he had asked her to go with him to Sonora for 10 days in April to set up to 20 cameras, presumably to photograph wildlife.

Brun was described as "an excellent tracker, putting in countless hours in the field each month," in the book "Ambushed on the Jaguar Trail," an account written by Jack Childs and his wife, Anna. He is co-founder and project coordinator for the Borderlands Jaguar Detection Project. He and Anna, also a co-founder of the group, have been photographing jaguars in Southern Arizona since first catching Macho B on camera in 1996.

Jack Childs, of Amado, said he knew nothing of Brun's allegations until being told of them by a reporter. He declined to comment on them.

In their book, the Childs also thanked biologist McCain, and said, "His bulldog tenacity, tracking ability and vast knowledge of the wild critters of the region elevate the status of the project far beyond our expectations."

Brun was also described as "reliable, totally honest and very trustworthy" by a federal biologist for whom she had worked as an unpaid intern at Buenos Aires National Wildlife Refuge in 2001. Brun spent a year working for the refuge, surveying, releasing and tracking endangered masked bobwhite birds — "she was my right-hand person," recalled Mary Hunnicutt, a U.S. Fish and Wildlife Service biologist.

For years, many jaguar researchers and other wildlife biologists had wanted to capture a jaguar to learn more about its movements and other behavior, particularly because of concerns that a planned fence along the U.S.-Mexican border would disrupt its movements.

McCain was among the leading advocates of capture. Some environmental groups such as the Sky Island Alliance and Center for Biological Diversity have questioned or opposed capture on the grounds that its risks to the rare animal outweighed the benefits.

But from the moment that Game and Fish officials announced the Macho B capture, they have stuck to their account that the capture was accidental. They have said repeatedly that that trap and others in the area were set to trap black bears and mountain lions to study their movement patterns and migration corridors.

"While we didn't set out to collar a jaguar as part of the mountain lion and bear research project, we took advantage of an important opportunity," said Terry Johnson, endangered species coordinator for the Arizona Game and Fish Department on Feb. 19, the day the state announced the capture.

Arizona is at the northern edge of the range of jaguars. In a paper published in the Journal of Mammalogy last year, Childs and McCain said the project "provides valuable new information" on the distribution, travel patterns, longevity and activity of jaguars in the borderlands.

Walkosak, a former Reid Park zookeeper and volunteer with the jaguar project, said she supplied McCain and the project with female jaguar scat that she collected when the zoo's jaguars were in their fertile periods.

"Using the scat was an ongoing part of the project up till when I left the zoo" in late 2006, she said. "We would give him (McCain) maybe the equivalent of one bowel movement for a large cat. He would use that for a very long period of time. He was literally putting a small smear on a rock in front of the camera."

Walkosak and Avila, who now researches jaguars for the Sky Island Alliance, said the project got more photos of jaguars when they began using female jaguar scat.

He and other project workers "used jaguar scat in 2004," Avila said. "That same year, as a result of this, we obtained four photographs of jaguars."

Said Walkosak: "Afterwards we consistently got photographs whenever that (scat) scent was used."

Earlier this year, the zoo agreed to resume supplying jaguar scat to McCain and the project for use in attracting jaguars to the cameras, Basford said. McCain requested the scat to place at camera sites, not snares, she said.

Contact reporter Tony Davis at 806-7746 or tdavis@azstarnet.com and Tim Steller at 807-8427 or tsteller@azstarnet.com.

Macho B: death of a rare Arizona jaguar

Macho B was the only known wild jaguar in the United States. State game workers twice captured and eventually euthanized the big cat. Much of …