Meet Josie, 9: No secret she's transgender
Share this
1 of 4 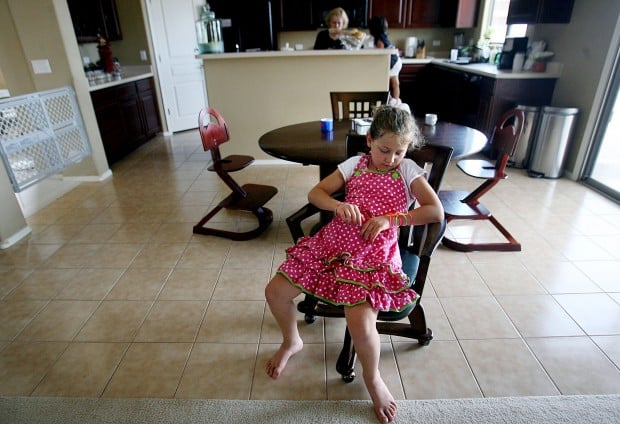 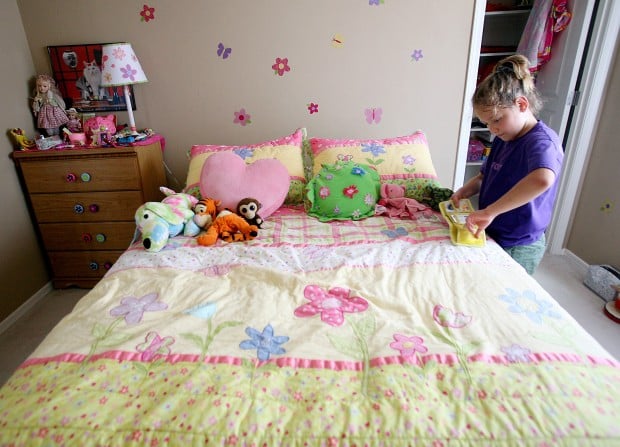 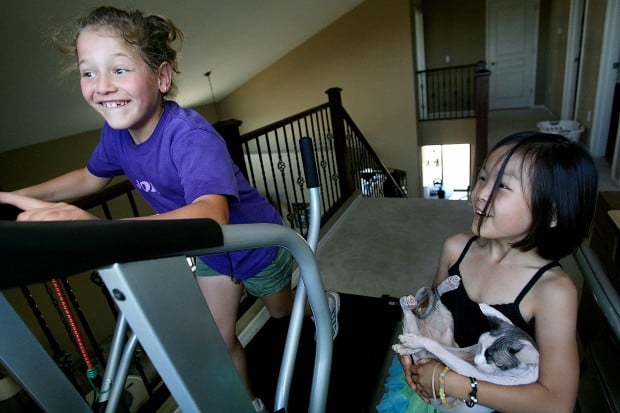 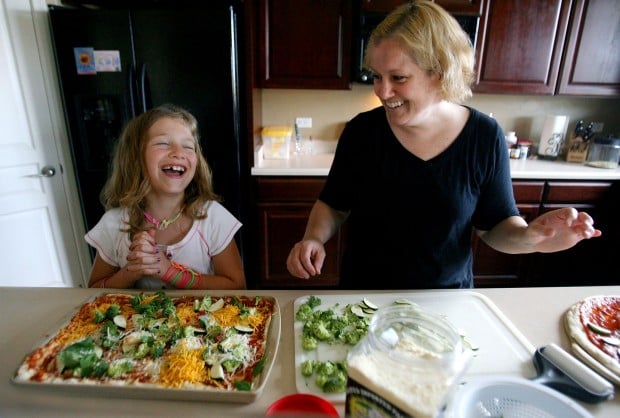 Wearing a khaki skirt and black tank top with a splash of heart-shaped rhinestones, 9-year-old Josie Romero skips across her family's living room, eager to show off her Great Dane, her little sister, and the birds in her backyard.

When asked about her necklace - a silver triangle on a black cord - she beams.

"This is a transgender symbol," she says of the circle that joins the symbols for male and female with a third symbol that combines the first two.

She whispers something in her mother's ear.

"You decide what you want to say," Venessia Romero, 42, tells her daughter.

"I haven't had my surgery yet," Josie says as she goes into the kitchen to help her mom make cinnamon rolls.

Josie Claudine Romero was born Joseph Manalang Romero in Colorado in April 2001. Her twin sister died shortly after being born. Though biologically male, "Joey" was diagnosed with a condition called gender identity disorder at the age of 5 by a U.S. military doctor in Japan, where the family was living.

No one knows how many transgender children exist.

Seven children under the age of 12 attend an informal group of Tucson-area "gender-variant" children Josie's mother organizes. Some of the kids consider themselves transgender and, like Josie, are living as the opposite sex. Others don't feel comfortable with traditional gender norms and labels.

Josie is unique not only because she transitioned from being biologically male to identifying as female at such a young age, but because she and her family are so public about it. The family has appeared on the National Geographic Channel, on the "The Tyra Banks Show" and in a British documentary. Josie does some public speaking to other transgender kids and their families.

Her parents - in particular her mother - have been harshly criticized for allowing such a young child to have media exposure. Postings on Internet message boards ask why Venessia and her husband, Joseph, wouldn't want Josie to quietly assimilate as a girl.

Some accuse Venessia of being a man hater who taught her daughter that a penis is a birth defect. Others say the Romeros should not have let Josie switch her gender at an age when she was just learning how to spell and tell time.

How could such a young child possibly know something so important? How did the family know it wasn't just a phase?

Venessia says she follows Josie's lead. And Josie is not only adamant that she's a girl, but also that she's transgender. She doesn't want to hide who she is, and her family says they respect and support that. Telling her story validates her, her mother says.

"Josie is very proud of who she is," Venessia says. "Why go through life with a secret? Where's the health in that? There should be no shame."

Until recently, there was scant awareness or discussion about children changing their gender identity, says Kim Pearson, executive director of TransYouth Family Allies, a national group that supports families with gender variant children and youths.

"I think we're seeing a generational shift right now. It used to be that children would have never even thought about telling their parents something like this. They would have had a spanking or worse," Pearson says. "Ask the person who transitioned at 50 and they usually knew when they were 5 or 6, but knew they shouldn't talk about it.

"The difference is now how parenting has changed. We talk and listen more. We're not as authoritarian."

Pearson says there's often a big downside for transgender children and their families who share their story because of the negative attention such testimonies often attract. But she says the benefits are enormous.

"This is how change is made. If everyone stays hidden, everyone will be hidden forever," Pearson says.

In addition to the public scrutiny they've had, the Romeros say their decision to allow Josie to live as a girl has cost them friends. And Venessia says her relationship with her grown son may never be the same.

Within months Josie expects to begin taking drugs to prevent her from going through puberty as a boy. As a teen she hopes to begin female hormone therapy. When she's an adult, she expects to have sexual reassignment surgery.

"If I could have transitioned at her age, I would have," says Alison Davison, coordinator of the Southern Arizona Gender Alliance. "I would have loved to have parents as supportive and understanding."

Philosophical, political and medical debates about being "out" like Josie rage on, as does controversy over how to support kids who identify as the opposite sex.

"Should treatment be given to prevent adult transsexualism? Some say yes," says New York psychiatrist Dr. Jack Drescher, a member of the American Psychiatric Association's Work Group on Sexual and Gender Identity Disorders. "They believe prevention is preferable to a lifetime of medical treatment with hormone replacement, not to mention there are also surgeries involved."

Transsexual is a term sometimes used to refer people, typically adults, who live as the opposite sex. Transsexuals are generally considered a subset of transgender, an umbrella term that refers to people who do not conform to the "norm" of their gender of birth.

Other therapists say preventing certain children with gender identity disorder from transitioning is a recipe for depression and self-harm - supporting them through transition allows them to flourish.

"Josie will change her mind on many issues in her life. Halfway through grad school she may switch her major," Venessia says. "But her blood type will never change, and she'll always be female. All through Josie's life she has persistently and consistently identified as female. Josie is a girl, has always been a girl, and will grow up to become a woman. That is just part of who she is."

The American Psychiatric Association has no treatment guidelines for gender identity disorder, meaning insurance companies can claim any treatment approach is "experimental" and refuse to cover it. That led the association to form a task force to determine whether guidelines should be developed.

Also being discussed is whether to remove gender identity disorder from the American Psychiatric Association's Diagnostic and Statistical Manual of Mental Disorders (DSM). Critics say leaving it as a mental disorder in the DSM is stigmatizing the way homosexuality once was until it was removed from the DSM as a disorder in 1973.

The psychiatric association is updating its DSM for release in 2013. The work group Drescher is part of recommends removing the word "disorder" and instead calling the DSM diagnosis "gender incongruence." The group also recommends tightening the diagnosis for children to include six rather than the previous four criteria. (The number one indicator for diagnosis is a strong desire to be the other gender, or an insistence that he or she is the other gender.)

Being "out" isn't easy for transgender children or their families.

TransYouth Family Allies regularly hears from families with gender-variant kids who are accused of exploiting their children by supporting their transition.

While Josie's birth certificate now says she's a girl, some families encounter difficulties enrolling gender-variant kids in school because their birth certificate says they are one gender but they present themselves as another..

Later this summer Josie will attend a camp called Aranu'tiq, an indigenous Alaskan word for a person thought to embody both the male and female spirit. Aranu'tiq people were often revered and thought to be lucky because their existence transcended traditional gender boundaries.

The camp's location is a secret to protect its campers' safety.

"I am a little girl"

Venessia and Joseph Romero say Josie always preferred "girlie" activities and identified with female characters in books and movies. By the age of 3 she was throwing tantrums when her mother wouldn't buy her clothes from the girls' department.

When she was 5, she put on her mother's makeup, jewelry and one of her younger sister's dresses.

"You look just like a little girl," Venessia told her.

The family did not seek out media attention. A year ago, National Geographic contacted TransYouth Family Allies seeking a family with a transgender child, and the group contacted the Romeros. Venessia says the family gave it a lot of thought, including talking with Josie. Ultimately, they decided it would be a good idea and other media appearances soon followed.

"This world isn't going to change on its own," Venessia says as Josie and sister Jade, adopted from China when she was 2 and Josie was 3, ride their pink and purple bikes. "I don't want her growing into a world that isn't ready for her."

She also doesn't want Josie's gender to consume her life. Josie talks about being an astronaut when she grows up and enjoys a wide range of sports. She completed her first triathlon last year. She says she also wants to be a mother one day.

Dad Joseph, 39, is an engineer with the U.S. Air Force and the family moved to Tucson in 2008. Though Josie and Jade briefly attended public school, they are now home-schooled, partly because of questions about which school bathroom Josie would use.

Venessia says Josie should use the girl's bathroom. Vail Unified School District Superintendent Calvin Baker says school officials would need to discuss the issue with the family, but stressed that Josie is welcome to attend school and that district officials will do whatever they can to make sure she feels comfortable and safe.

Being ridiculed and harassed is common for transgender children, says Tucson child psychologist Rich Muszynski, who works with gender-variant children and their families.

"There is going to be prejudice and discrimination," Muszynski says. "But when kids know they have the love and support of their families, it paves the way for good self esteem and good future adult relationships."

Josie's parents are now focused on raising two strong daughters. But it hasn't always been easy. Joseph, especially, mourned the loss of the son he thought he had.

People often fall in love with the idea of a child before they have him or her in their arms, Venessia says.

"Breaking those molds and shedding our preconceived ideas of who our child ought to be is a struggle, but it's the only way to allow our children the freedom to grow and discover who they truly are," she says. "Until we do that, we cannot begin to celebrate the person or their potential in a real and meaningful way.

"When you have a child you should be open to whoever that child may be."

Transgender: People whose appearance and/or behavior don't conform to the cultural "norm" for the gender into which they were born. Categories include:

Transsexuals: Born into one gender but identify psychologically and emotionally as the other.

Cross-dressers: Usually heterosexual men who identify as and are comfortable with their gender but dress and take on mannerisms of the opposite gender.

Drag performers: Dress and act like the opposite sex to entertain an audience. Some are gay, some aren't.

Intersex: Born with external genitalia, chromosomes or internal reproductive systems that are not traditionally associated with either a "standard" male or female.

SOURCE: The Southern Arizona Gender Alliance and the National Center for Transgender Equality

Josie Romero, the 11-year-old Tucson girl who the Arizona Daily Star wrote about in July 2010 , was featured on Dateline NBC tonight.