Pinau Merlin was studying quantum mechanics when she moved to Tucson 40 years ago.

“The desert turned me into a naturalist,” she says.

Twenty years ago, Merlin penned “A Field Guide to Desert Holes,” an authoritative roadmap to the holes that dot the landscape all around Southern Arizona. She spends hours at a time exploring and contemplating the desert around us, making her something of an expert on the topic.

A few hours wandering a trail with her was proof of that.

We met at Saguaro National Park East on a clear, crisp morning. Merlin, dressed in jeans and a green shirt that allowed her to blend into the environment, drove directly to the Cactus Forest Trail, hops out of the car, grabs her binoculars, packs a bottle of water and leads the way.

A few feet in, she stops.

“A little ground squirrel has been at work here,” she says, her voice loud enough to be heard but soft enough not to disturb any critters that may be around.

She points to a small, shallow hole. “Oftentimes, when holes don’t go anywhere, it’s because an animal has dug looking for a seed or following a scent.”

She knows it’s a ground squirrel because the mound of dirt around the hole is in a fan shape. She has long observed desert animals, studied how they dig, how they move.

“They have distinctive traits, and each animal, when it’s digging, digs in a different way,” she says.

“When badgers dig, it’s a geyser of dirt. You get a hole shaped like a half moon, but you get this big throw mound. And coyotes, when they dig, the dirt goes back through their legs so you get a V-shaped pile. The throw mounds and the size of the hole are good indicators of the kind of animal.”

She moves a little way down the trail and stops again.

“This little hole is a Harris’ antelope squirrel,” she says pointing to a roughly 2-inch hole with no mound around it, and then to several others in the same area.

“With Harris’ antelopes you’ll find a whole bunch of holes in same area because they are looking for groceries,” she explains.

They particularly like barrel cactus, she says as she eyes a tidy hole underneath one.

“They like to put a hole under barrel cactus for protection and the roots stabilize the hole. Inside, there’s a little tunnel, then a nest chamber and sometimes a little other tunnel.”

Then her eye spots a small area of dark, hardened soil.

“This is cryptobiotic soil,” she explains. “There are all kinds of microorganisms in here and they are really important. They are ancient. This one is maybe a few hundred years old.”

The living, solid crust protects soil from blowing away, absorbs rainfall and nutrients hold on to the crust.

“It’s a really important part of the desert,” says Merlin.

She walks on, her eyes barely missing a thing.

“This is a deer track,” she says, pointing out a track most would miss. “He’s not moving super fast; he’s probably just going to jump across the trail. See, his toenails are going in and he pushed up some dirt at the forefront of the track.”

She spots a mound of dirt under a tree and leads us off the trail. The soft dirt under the tree is pocked with holes.

“You get more than one species making a hole; that can confuse people,” she says.

“There are several using it here because the soil is nice and soft.”

She points toward the roots and to larger depressions in the sand. Javelinas, she says.

“This linear stuff along the roots of plants is pretty classic javelina.”

Not so to the trained eye.

“They are all pretty distinctive,” says Merlin.

“You can stand in one spot and turn around and see a million different holes.”

She spies what looks like a mound of decaying cactus and other plants off the trail and walks toward it.

“This is a girl pack rat house, which we know because the girls are sedentary, the males are transient. The mother usually has the best house, and the daughters don’t move that far away. If she dies, killed by an owl or something, a daughter might move back in. And she starts gathering. The (houses) get bigger and bigger and bigger. They can be used for many generations.”

She walks around the mound to point out the back door, an exit out the back, and a faint, narrow path to a bush where the pack rat would find cover.

“If you are at the bottom of the food chain, you need a lot of back doors,” says Merlin. “I watched a Gila monster go into the front door and flying out the backdoor was not only a packrat, but a Harris’ antelope squirrel.”

There’s plenty of chewed up prickly pear around the house, too. Pack rats, like many desert animals, munch on the cactus, biting into the side where the pad is softer, and spitting out the needles. Each animal has a distinctive bite mark, Merlin says.

“Prickly pear is a good standby for a lot of animals. It doesn’t have a lot of nutrition, but it has moisture.”

If prickly pear isn’t around, they’ll go for saguaro. Jackrabbits munch along the bottom, bighorn sheep eat a little higher and pack rats make a spiral as they eat around a cactus.

If you see holes higher up in the saguaro, they were made by either a woodpecker or flicker.

Flickers head to the top of the cactus, where the ribs are thinner and not fused together. That does structural damage to the cactus.

“Very often, if a big storm or wind goes through, it’ll take the top off the saguaro and that introduces bacterial decay and sometimes it’ll kill the cactus.”

Though flickers and woodpeckers are the only two birds to make holes in saguaros, once they have been made, they become valuable real estate for other birds.

“There are huge demands for the cacti holes,” says Merlin, who has observed a flycatcher aggressively dive bomb a woodpecker’s hole in an effort to drive the bird out.

As she walks along, she points out an an area littered with scat. “This is a latrine,” she says. Most were white and clearly old. She picks one up. “This is from a bobcat, it has fur in it. With bobcats you look for Tootsie Roll shapes.” This latrine is exclusively used by one bobcat, and family members if there are any. It’s part of marking their territory. Though if a coyote comes along, the latrine is an invitation to him.

“Coyotes don’t pass anyone else’s scat without leaving their calling card,” she says.

Merlin is a natural teacher, and stops every few feet to explain a hole, tracks, disrupted plants. If she picks up something, such as an owl’s tuft of down she sees blowing softly in the wind as it clutches to a branch, she puts it right back where she found it.

And you will never find her kicking dirt into a desert hole.

“In the desert, you have no business filling in holes,” she says. “We’re disturbing someone else’s habitat. That should never happen out in the wild. You have to respect nature.”

“A Field Guide to Desert Holes,” published by the Arizona Sonora Desert Museum, is packed with details.

Among the things you’ll discover:

Here are opportunities to observe some amazing hawks in the wild

Raptor watching opportunities near Tubac and at the Historic Canoa Ranch.

It's a banner year for wildflowers at Saguaro National Park

These are some of the critters you might see while out and about in Southern Arizona. If you are looking for a specific type of critter, you c…

Art and artisans gather in Oro Valley for spring festival

The event will feature artisans, food, music and family-friendly activities.

Meet Me at Maynards celebrates supporting downtown Tucson for 10 years

Meet Me at Maynards, the community meet-up-and-move event, is celebrating its 10th birthday with a party.

More than 25 organizations dedicated to finding homes for homeless pets will be at the fifth annual Adopt Love Adopt Local event. 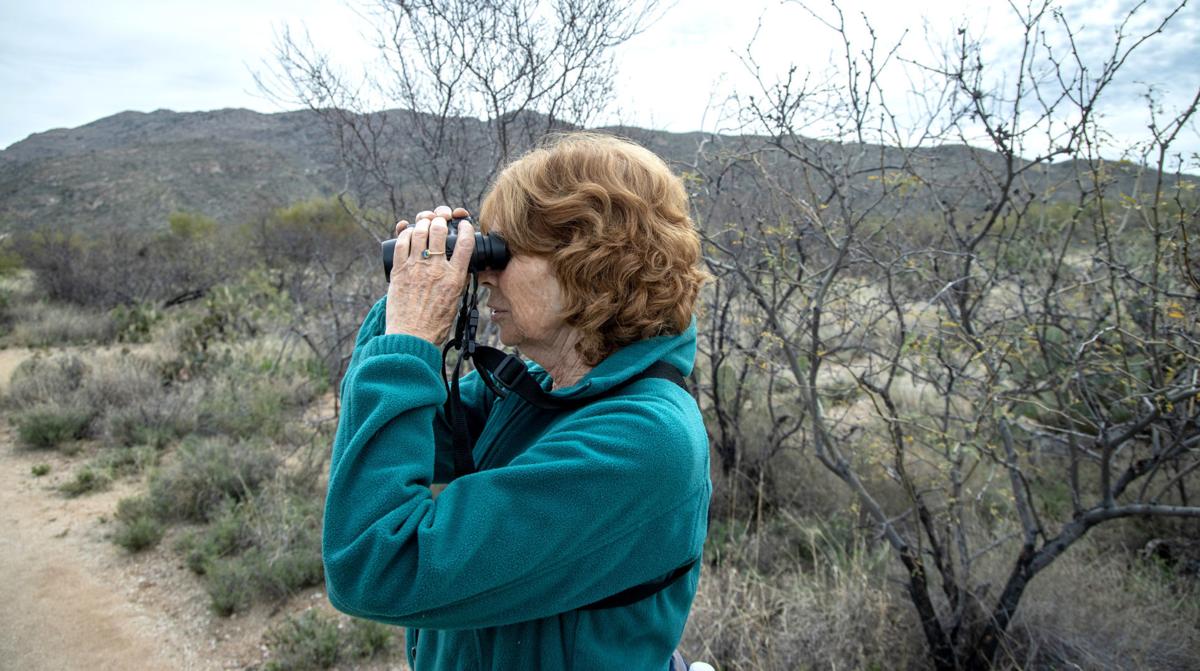 Naturalist Pinau Merlin scopes out animal homes on the Cactus Forest Trail in Saguaro National Park’s east unit. She says desert animals are conscious of human visitors and can detect people’s aggression and fear pheromones. She treads carefully so as not to disturb “someone else’s habitat” and says non-threatening hikers with good animal manners will be left alone. 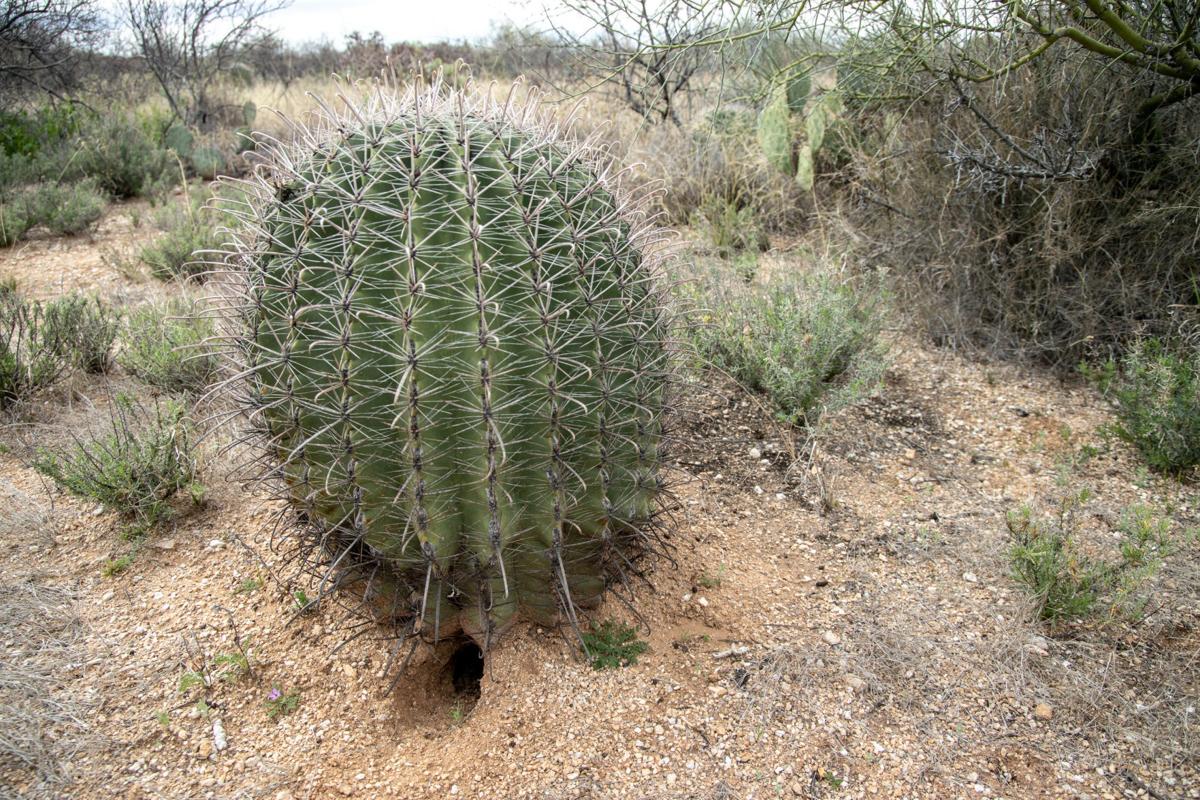 Harris’ antelope squirrels burrow under barrel cacti for protection. Burrowing animals will often dig an escape route as well, says author Pinau Merlin. “If you are at the bottom of the food chain, you need a lot of back doors.” 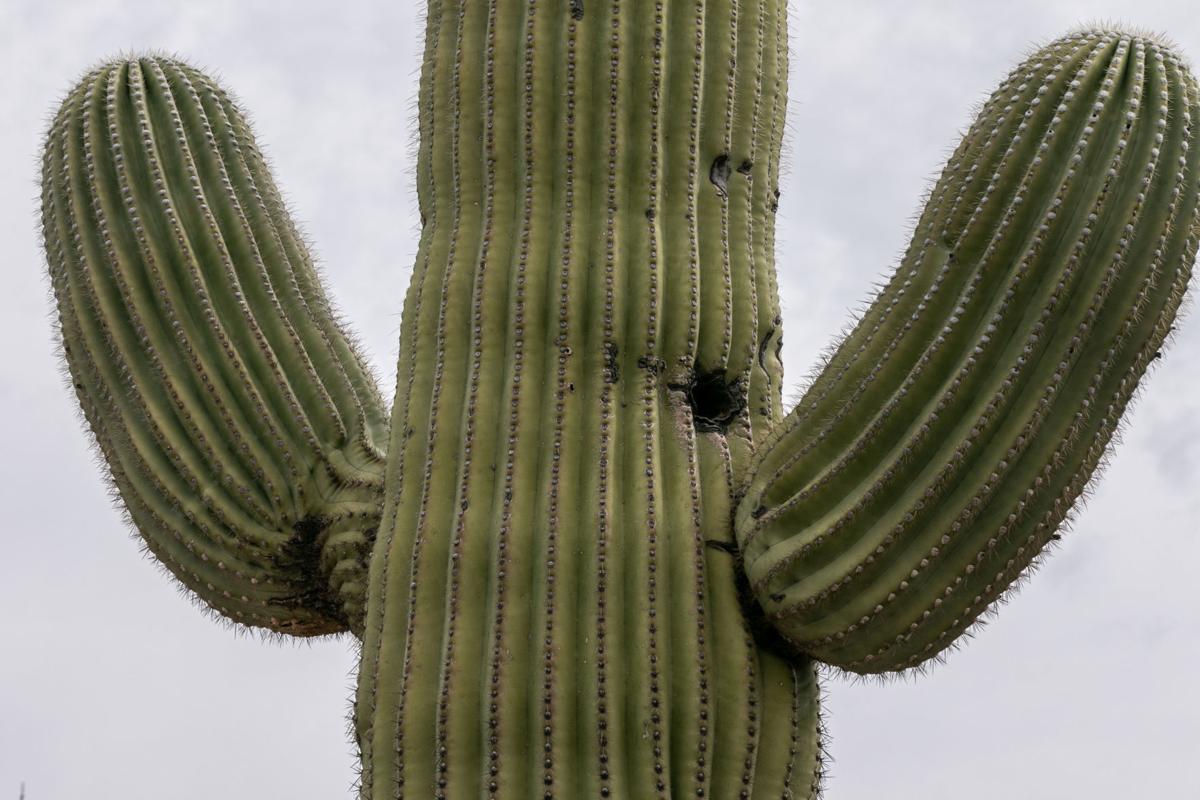 Holes in saguaro cacti are prized real estate. Ones made by Gila woodpeckers are sometimes used by elf owls. Flycatchers also compete for the prime nesting spots. 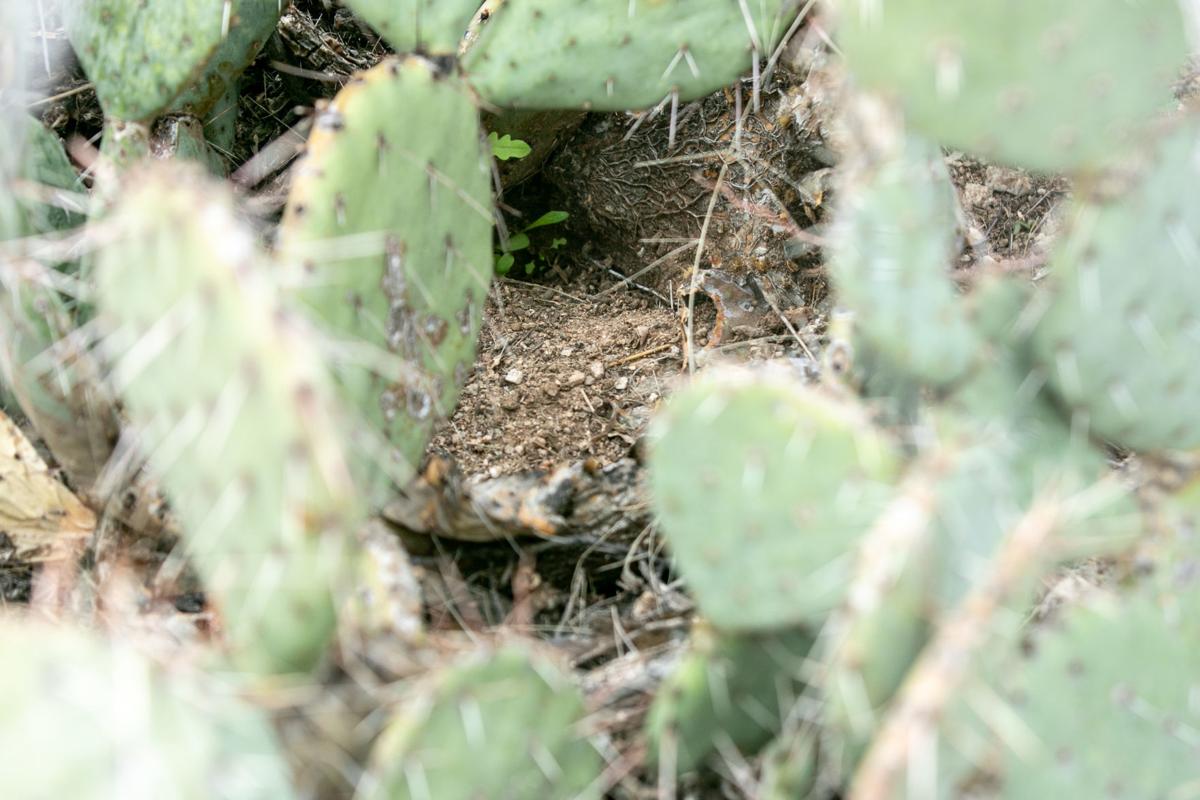 Pack rats like to hide among prickly pear pads and to eat their soft edges, spitting out the needles. Prickly pear “doesn’t have a lot of nutrition,” says Merlin, “but it has moisture.” 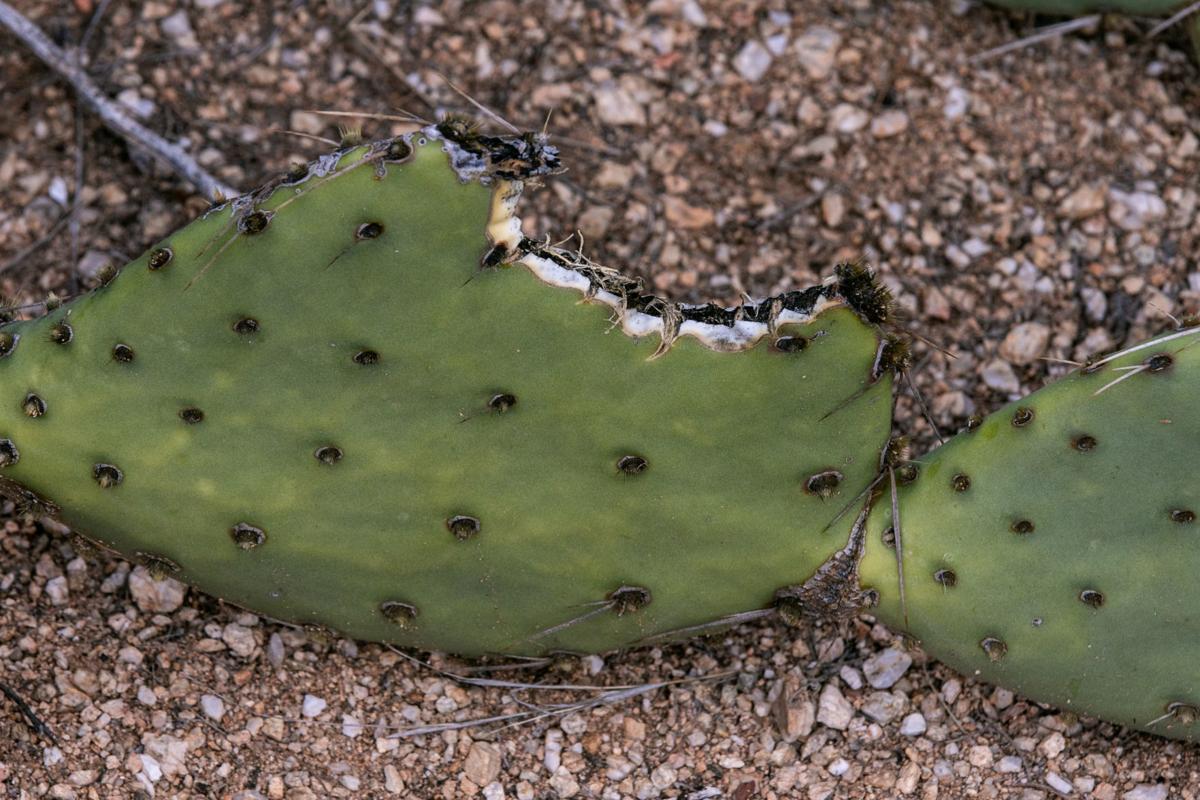 Pack rats have been here. Pinau Merlin’s trained eye can tell what animals made what holes and who’s been munching on prickly pear pads on the Cactus Forest Trail east of Tucson. 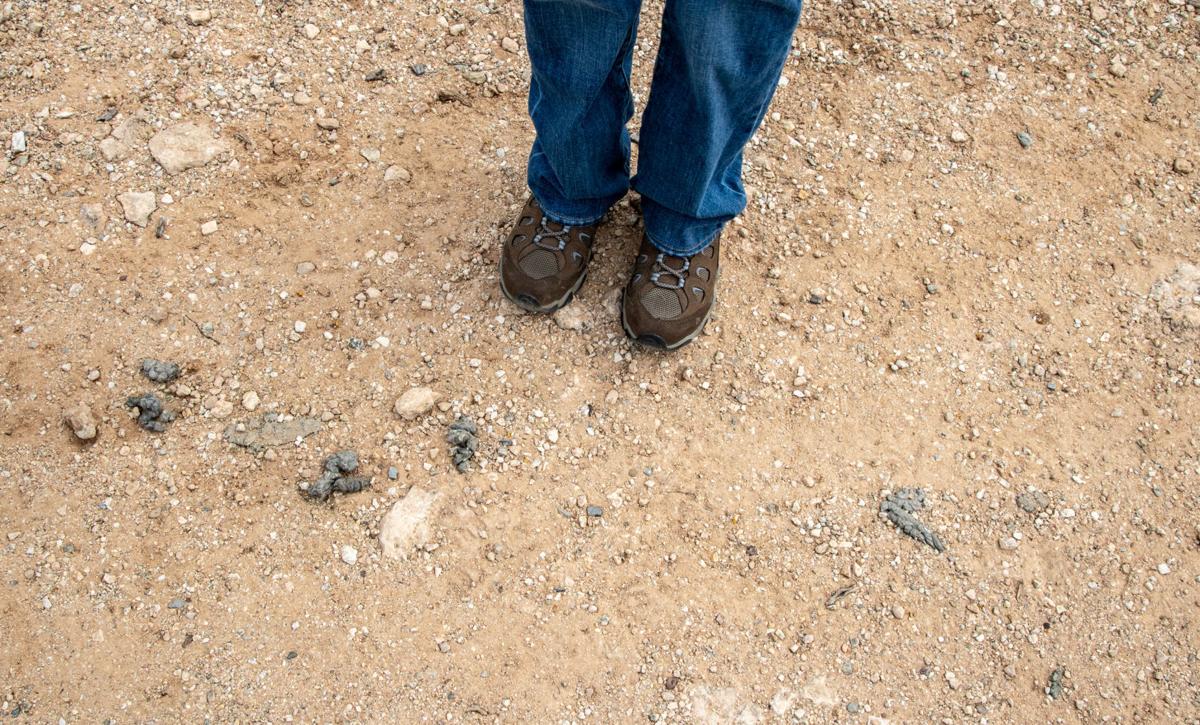 Tootsie Roll-shaped scat from a bobcat family contains rabbit fur and serves to mark their territory. Any coyotes that pass by will also leave a calling card in this desert “latrine.” 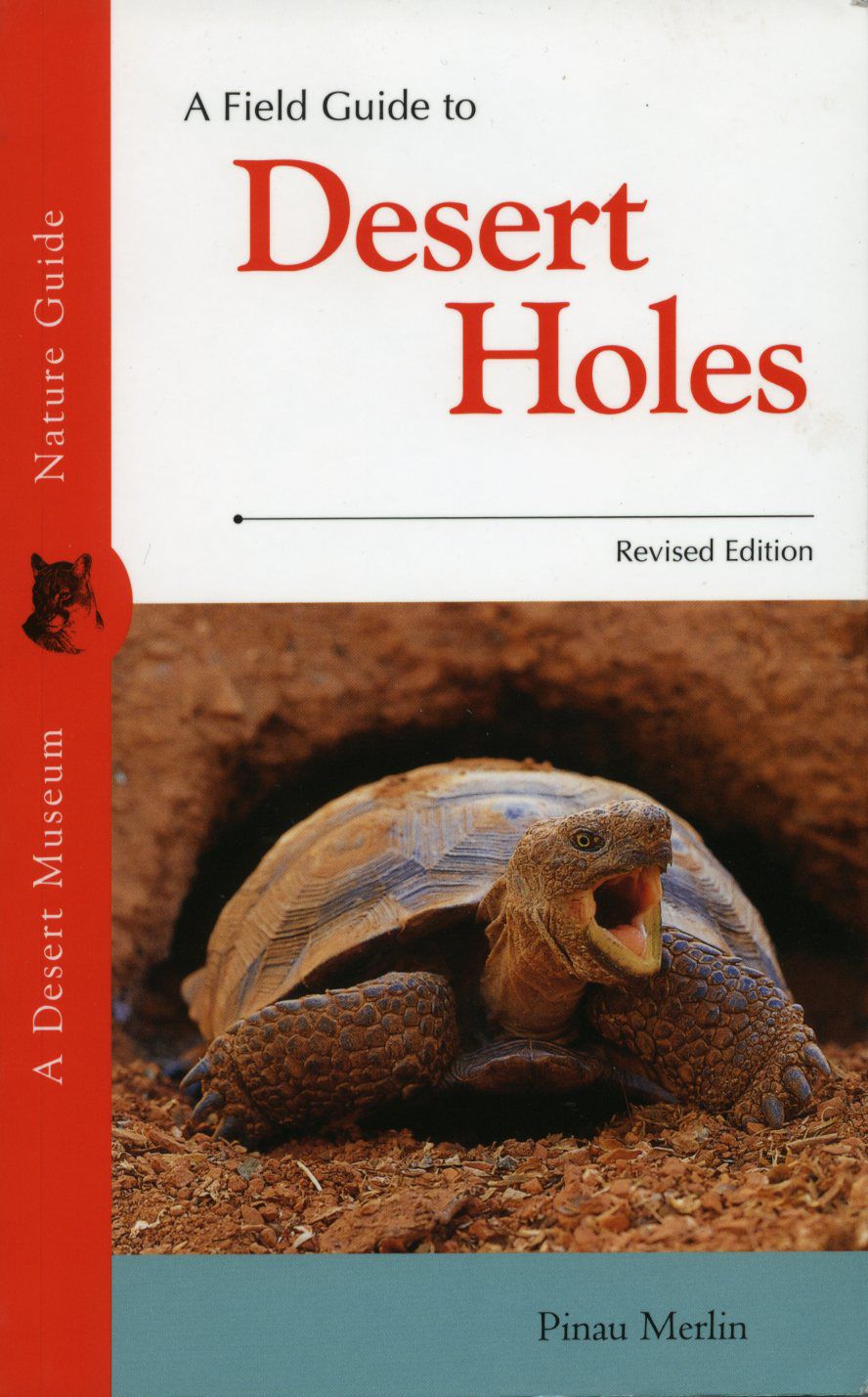 A Field Guide to Desert Holes by Pinau Merlin